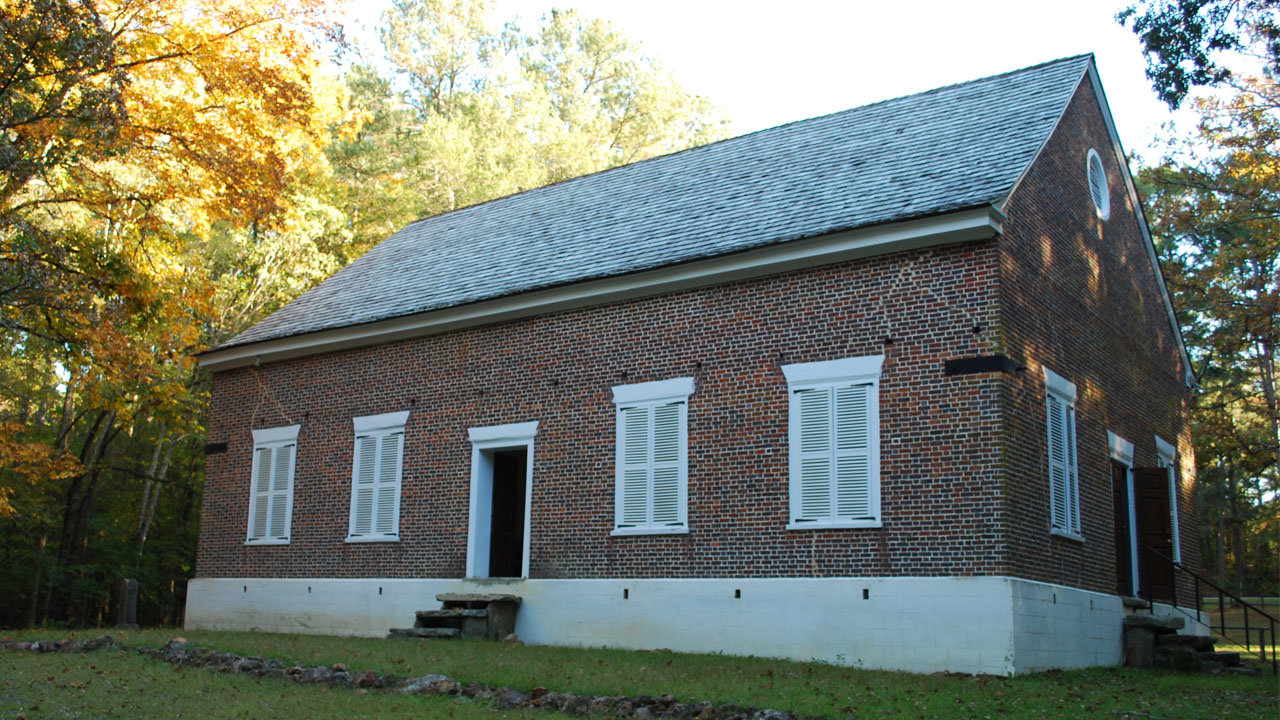 In 1772 Daniel Marshall established and was pastor of Kiokee Baptist Church near Appling, Georgia Baptists' first congregation. Above is pictured the Kiokee meeting house, built in 1808, 24 years after Marshall's death. Photo courtesy of Charles Jones

Editor’s note: The Index will be sharing historical items for its readers leading up to the 200th birthday of the Georgia Baptist Convention in 2022.

“His success is surprising when we consider that he is a man of no bright parts nor eloquence nor learning. A piety, earnestness and honesty are all he can boast of.”

This blunt assessment of Daniel Marshall (1706-1784) was made by Morgan Edwards, a Baptist historian who had met him. Others described Marshall as a “stammerer” and “not above mediocrity.”

Yet, Daniel Marshall was the primary human instrument God used to establish a Baptist foothold in Georgia as an itinerant preacher, church planter, and mentor of pastors, he remained in Georgia during the American Revolution to care for fledgling churches when other pastors fled. Despite what others said of him, there are people today who call Daniel Marshall one of their “heroes.”

So how did this unlikely hero – a 40+-year-old Congregationalist deacon from Windsor, Conn. become the Baptist preacher upon whose shoulders Georgia Baptists stand today? How does his legacy continue to guide us? 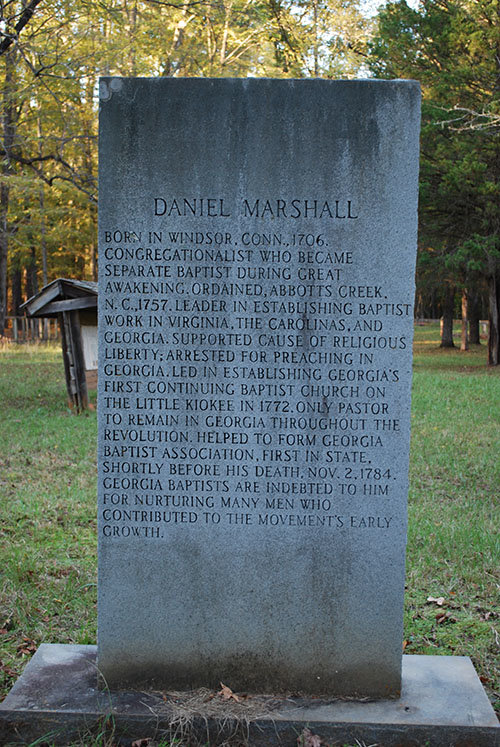 A marker tells of the impact Daniel Marshall had for the gospel and Georgia Baptists.

Daniel Marshall must be understood in the context of the First Great Awakening (ca. 1740-1776). His life chronicles the emergence of the Separatist Baptist and the beginning of the modern missions (benevolence) movement.

The First Great Awakening was a series of sweeping revivals that ebbed and flowed before the American Revolution. Thousands gathered to hear the preaching of an Anglican Priest named George Whitefield (1714-1770). For nearly 40 years, Whitfield traveled the Colonies and Great Britain preaching a message focused on God’s grace. Daniel Marshall was 38 when he first heard Whitefield preach and found himself immersed in the spirit of revival. Marshall identified with revitalized Congregationalists, who organized new congregations called the “New Light Separatists.”

Many Baptists of New England did not engage in the revivals of the Awakening. At the same time, some converts from other denominations began to embrace the New Testament teaching of believer’s baptism. Whitefield observed, “Many of my chickens have turned into ducks.” Often these converts were not offered a warm welcome in the Baptist meeting houses of New England.

Soon, some “Congregational New Lights” began to organize Baptist churches. At first, they were identified as “New Light Separatist Baptists.” Later the name was shortened to “Separatist Baptist” to distinguish them from “Regular,” “General,” or “Seventh Day” Baptists.

The life of Daniel Marshall also reflects the beginning of the modern missions movement. They called it a “benevolence movement,” which eventually grew to include missions, education, Sunday Schools, publishing, and temperance societies.

Congregationalist pastor Jonathan Edwards was considered the theologian of the First Great Awakening. His sermon “Sinners in the Hands of an Angry God” helped spark revival fires in New England in 1841. Edwards was also instrumental in the birth of the modern missions movement.

In 1749 Edwards published “"An Account of the Life of the Late Rev. David Brainerd," based on the dairies of a young man who lived and worked as a missionary among the Delaware Indians. Brainerd, who died at 29, became a model of inspiration for modern missions. His biography inspired William Carey, Adoniram Judson, Luther Rice, and many others who were pioneer missionaries a generation later.

Yet in 1750, the year following the publication, Daniel and Martha Sterns Marshall (1726-1793) moved to western New York/Pennsylvania to serve as missionaries. They shared the gospel with the Mohawk Indians for 18 months until the French and Indian War forced them to move. The Marshalls were pioneers in missions a generation before the “modern mission’s movement” began. They brought this missions “DNA” to Georgia.

Instead of returning to New England, the Marshalls moved south to the Shenandoah Valley of Virginia. Here they became Baptists, joining a “Regular” Baptist Church. They were accompanied by her brother, Shubal Stearns, who had been ordained by a “Separatist Baptist” church in Connecticut. As had been the case in the north, the families did not receive a warm welcome by the Baptists in their new home.

Following Whitefield’s example, the brother’s-in-law began making itinerant preaching tours in the valley and surrounding areas. Members of their local church thought their behavior so odd they requested the Philadelphia Baptist Association to send someone to check on their activities. After examining their work, the association’s representative told the church, “If I had members like this they would be worth their weight in gold.”

Learning the Piedmont section of North Carolina needed churches, the Marshall/Sterns families moved to North Carolina and joined by other relatives from New England. There they established Sandy Creek Baptist Church. It fostered itinerant evangelism, mentoring young pastors and a church planting movement across Virginia, Kentucky, Georgia, and North and South Carolina.

Shubal Sterns remained the pastor of Sandy Creek until his death in 1771. Marshall had moved several times in North and South Carolina, establishing new churches while continuing a schedule of itinerant preaching across the Southeast. One of these preaching tours brought him to Georgia in 1771. Marshall was now 65 years old, but still going strong.

One day Marshall was conducting an outdoor service. While on his knees in prayer, a heavy hand grabbed him as a constable (deputy) declared, “You are my prisoner!”

He was arrested on the charge of “preaching in the Parish of St. Paul without a license.” Prior to the Revolution, dissenting ministers were required to have a license issued by the Anglican (State) Church which included the locations they were permitted to preach.

During the ensuing discussion, one of those present stood bail for Marshall, promising he would see that the preacher would show up in court at Augusta. The service continued with both the arresting magistrate and constable remaining.

Two weeks later in court, Marshall was ordered not to return and preach anymore in Georgia. He pleaded the Scripture answering, “Whether it be right to obey God, or man, judge ye.“

Both arresting officers were touched. The magistrate was later converted and became one of Marshall’s good friends. The constable, Samuel Cartlidge, was later led to the Lord by Marshall who would declare, “You are my prisoner! And my brother in Christ!” as he baptized him. Cartlidge not only became a believer, he was later ordained to the ministry.

Such was the gift of the humble Marshall to turn his enemies not only into friends, but brothers in Christ.

The following year, Marshall moved to Georgia and established Kiokee Baptist Church, which was constituted in 1772. He would go on to be instrumental in planting other churches and mentoring younger pastors in Georgia.

At the beginning of the Revolution there were seven small, struggling Baptist churches in Georgia. The other ordained pastors fled the state during the war because of death threats from Tories. Marshall, who faced the same threats, remained and took care of the churches. Arrested several more times and harassed during the war, he refused to flee in the face of danger.

Due largely to his efforts, six out of the seven churches survived the war. It also shaped views of the relationship between church and state and freedom of religion.

Marshall’s life illustrates the dynamic impact of the First Great Awakening, the emergence of the Separatist Baptists’ passionate revivalist and evangelistic spirit, the genesis of the modern missions movement, and a ministry of mentoring younger ministers that was the prelude to Baptist higher education. Revivalism, evangelism, church planting, missions, and education all became drivers for the establishment of the Georgia Baptist Convention in 1822, laying the foundation for what Georgia Baptists’ collectively do today.

Furthermore, his life is a reminder that God can use anyone, of any age or limitations, to do His will.

An unlikely hero, yes! Hopefully, Daniel Marshall will become one of your role models and heroes too.