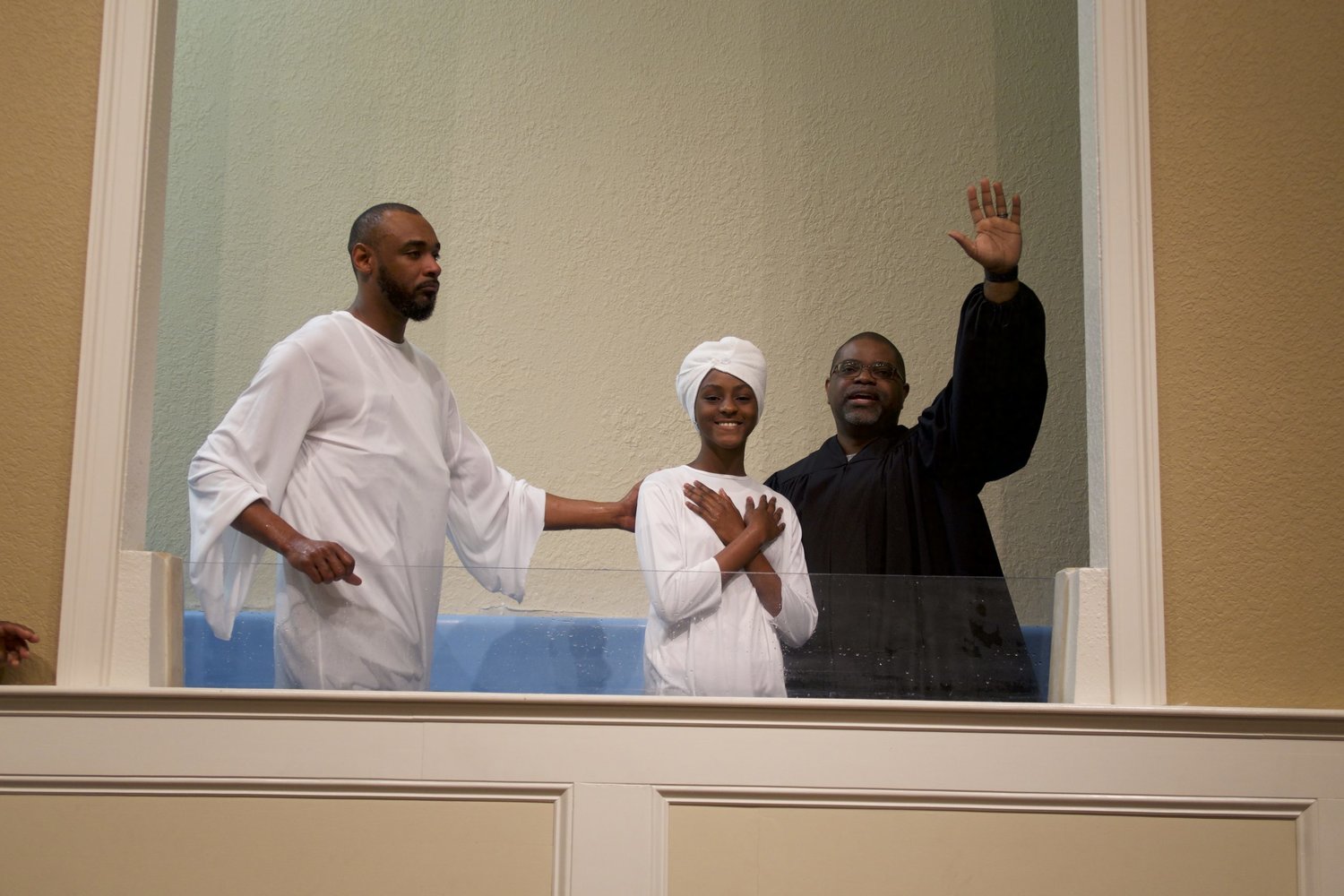 Pastor Adrian Taylor, right, of Springhill Missionary Baptist Church in Gainesville, Fla., rejoices after a baptism at the church. Taylor credits God and His unchanging Word for the church's growth. 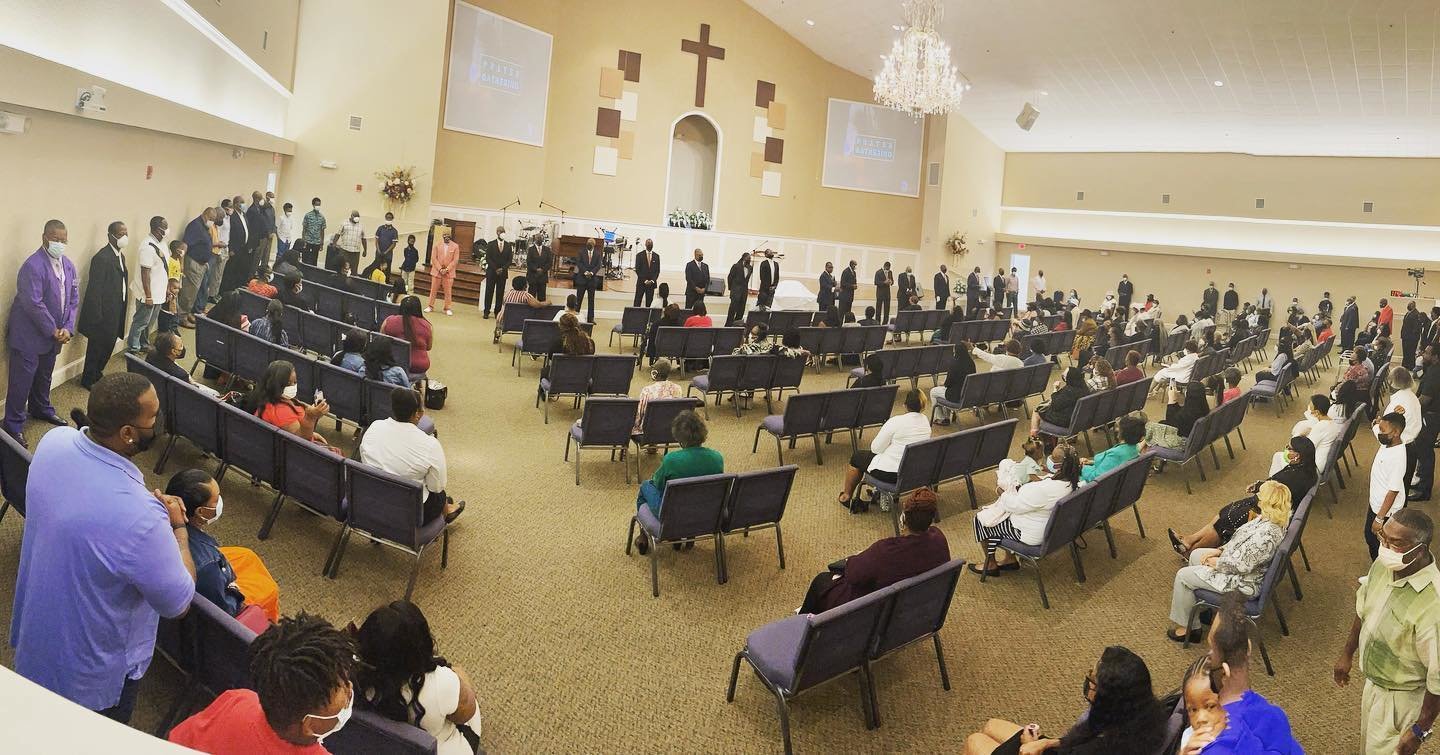 Worshippers at Springhill Missionary Baptist Church in Gainesville, Fla., gather in a prayer circle at the church. 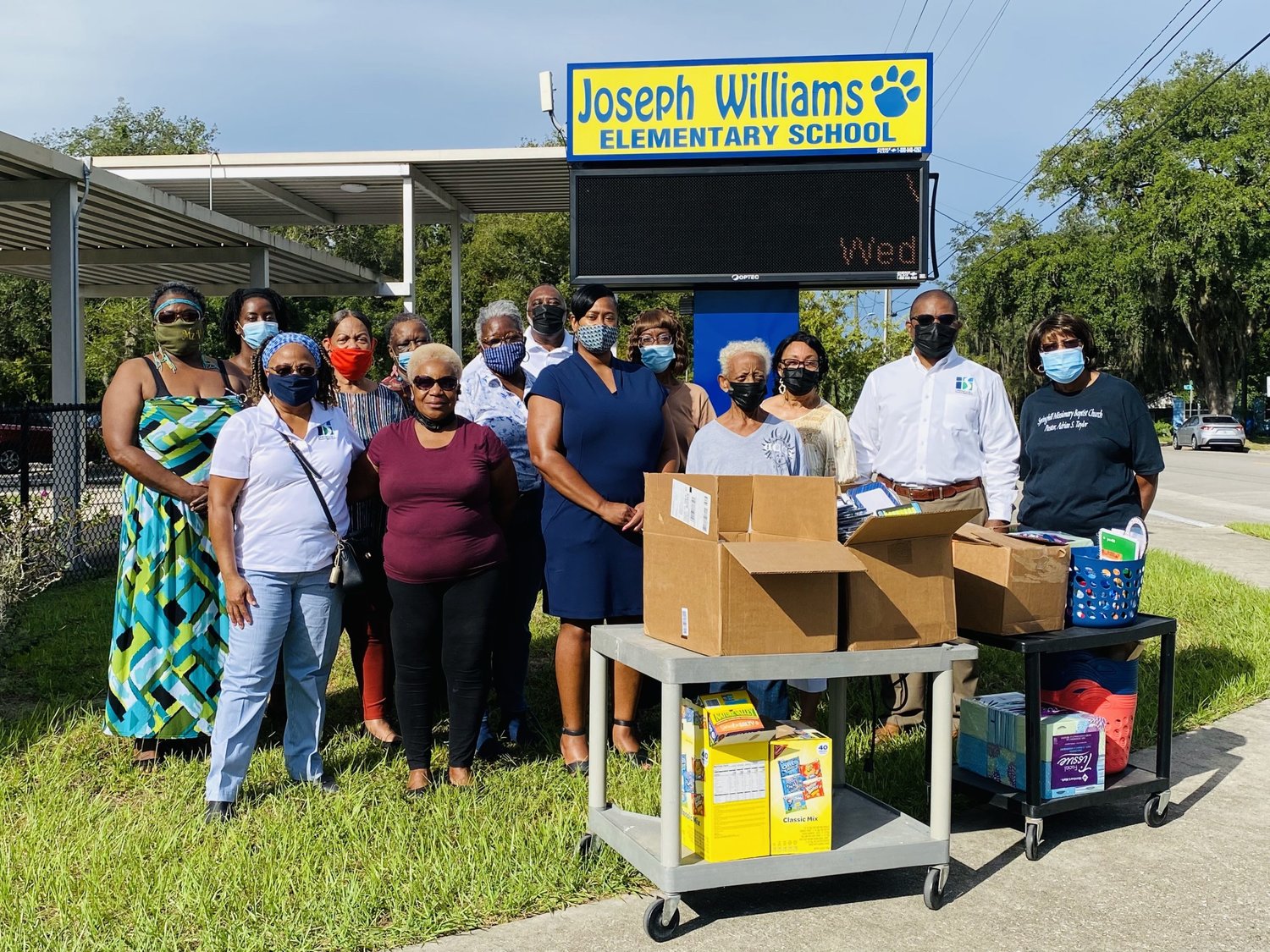 Members of Springhill Missionary Baptist Church in Gainesville, Fla., attend a community outreach event. As part of its outward focus, the church united to serve its community through its “The Church Has Left the Building” initiative.
Previous Next
Posted Wednesday, May 11, 2022 11:01 am
By DAVID MOORE, Florida Baptist Convention

When Pastor Adrian Taylor thinks about the revitalization and growth that Springhill Missionary Baptist Church has experienced over the past 17 years, he is quick to give credit to God and His unchanging Word, the Bible.

“The most important factor has been fidelity to Scripture,” he said. “That has been the catalyst for our growth. We are a Bible-believing, preaching, teaching and practicing church.”

As pastor, Taylor said he is intentional about teaching and preaching straight Scripture. He goes through entire books of the Bible in his sermon series, which allows members to study ahead and prepare themselves each week. And the Scripture-of-the-day that is shared on the church’s social media comes from Sunday’s sermons.

Taylor accepted the call to serve as executive pastor of the church in February 2005. At the time, the church was meeting in a smaller, older building but had already started construction on its current facility.

“We moved forward, and God blessed,” he said, remembering the congregation marching down the street from the older building to its new facility in July 2005.

“This church was started in 1886 and has a long, rich and storied history in what is formally known as the Spring Hill community in downtown Gainesville.”

The church grew from about 200 members to about 800 before the recent pandemic. The average age of the congregation was about 70 when he started, and today the average age is 40.

“He went there as a 25-year-old and has been instrumental in revitalizing the church to become a multigenerational congregation that is having significant community impact,” said Gary Townsend, Florida Baptist catalyst for the North region.

Taylor said the church began focusing on outward missional work in an effort to reach the community and the lost. Being just a five-minute drive from the University of Florida campus also helped the church attract a good following of students who invited their friends.

“We became intentional about including them in our ministry, and I think they helped us turn the corner and revitalize the ministry,” Taylor said.

As part of its outward focus, the church united to serve its community through its “The Church Has Left the Building” initiative. On this one Sunday, the church went and served its community instead of holding its regular service – going and “being” the church instead of “having” church. Members dispersed throughout the community to pray with people, visit the elderly, buy groceries, fill up people’s cars with gas, and other ministry activities.

“For a traditional Baptist church, it was almost sacrilege,” Taylor said, noting some members were initially resistant to the idea.

“God really did something through this. We had people share that this was the most meaningful thing they had done. Some who did not want to do this now said they couldn’t wait to do it again.”

“It was another unique way to get our people engaged in missional work,” he said. “That’s one of the things that we try to push – that every member is a missionary. Every member should be on mission.”

The church has also allowed the community to use its facilities for various events and activities like job fairs, awards and promotion ceremonies for first responders, organizational meetings, political candidate forums and more.

When the pandemic hit, the church was forced to stop meeting in person due to local restrictions. The church was already streaming its worship services but had to move its small group ministries to Zoom.

“We managed and maintained through the tough times. We had a strong digital presence online and were already streaming our services. We had a good database system so were able to email, text and call to communicate with members,” Taylor said.

While attendance numbers have not returned to pre-pandemic levels, Taylor is hopeful for the future.

“We’ll double down on our missional work, and we’ll focus on doing our part to meet Challenge 2025 goals that the Florida Baptist Convention has laid out,” Taylor said, referring to the FBC’s Challenge 2025, a five-year vision to reach the nation’s third most populous state with the gospel.

“Ministry is a tough work, especially in these times, but we’re grateful for the journey.”