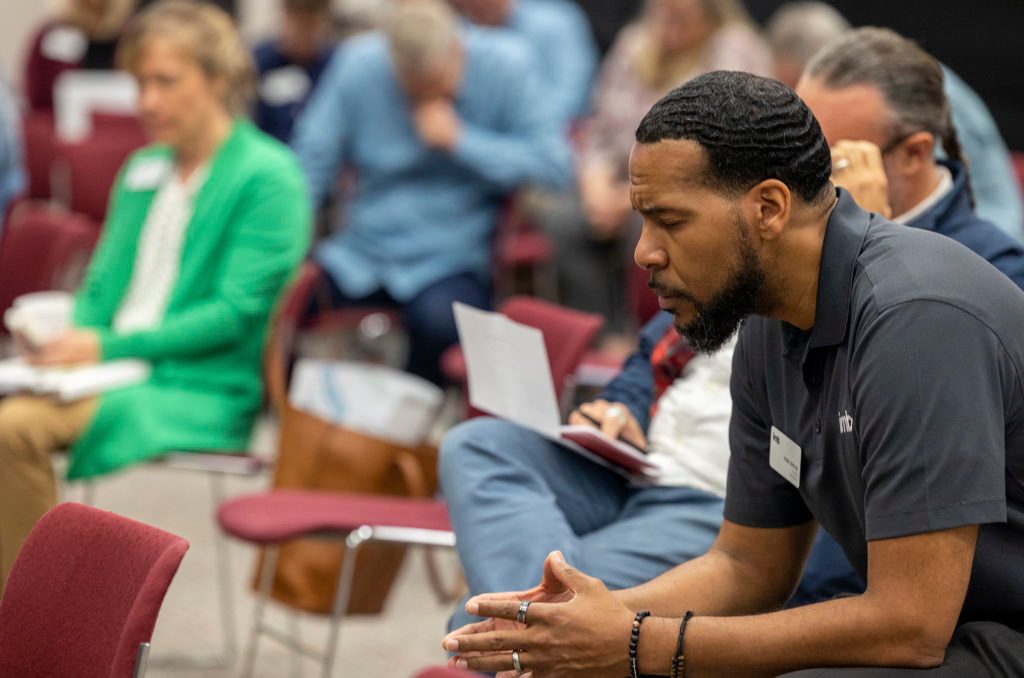 RICHMOND, Va. (BP) – International Mission Board trustees approved the appointment of 36 full-time, fully funded personnel to take the Gospel to unreached people and places during their Sept. 29-30 meeting near Richmond.

The meeting included the approval of a balanced budget for 2021-22 and orientation for 21 new trustees. Chuck Pourciau, trustee chairman and lead pastor of Broadmoor Baptist Church in Shreveport, La., presided over the meeting. 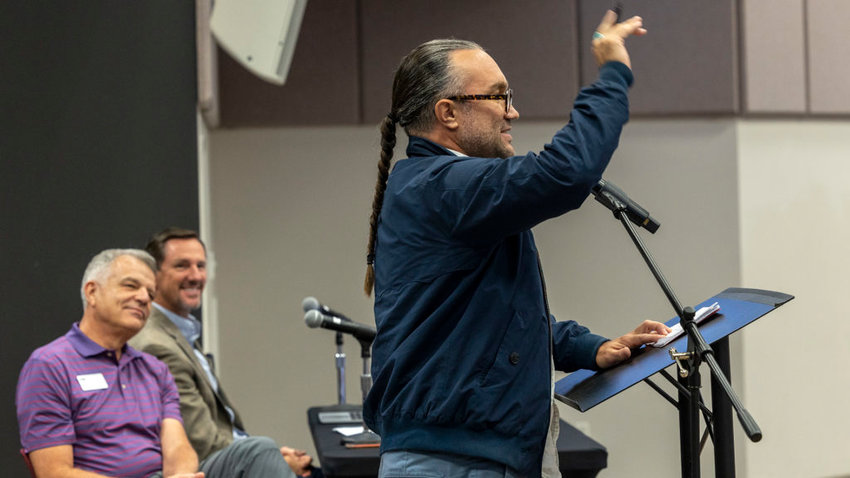 IMB trustee Brian Zunigha (right), a campus minister in Riverside, California, reports during the September trustee meeting that more than 800 Southern Baptists are in the candidate process for potential missionary appointment through the IMB. Those present, including trustee chair Chuck Pourciau (left) and IMB President Paul Chitwood (center), celebrated the news. IMB Photo

“We have a mission, and it is to get the ‘goods’ to the nations,” Litton said, referencing the SBC’s primary purpose of getting the Gospel to lost people. “I don’t want to miss this opportunity God has for us, and you are a strategic part of that mission.”

Important for the Great Commission

In his plenary address to trustees, IMB President Paul Chitwood expressed God’s favor in the way the Lord has led IMB to address abuse and develop a plan to do everything within the organization’s power to guard against abuse and provide better care for victims.

In 2018-2019, IMB underwent an examination concerning the organization’s handling of past matters and current policies and practices related to the prevention of and response to allegations of child abuse and sexual harassment (including sexual assault). The firm conducting the examination made recommendations for new policies and processes at IMB.

“Over the past two years, we have methodically implemented every recommendation, diligently moving toward the highest standards in abuse prevention and response, including providing compassionate, trauma-informed care,” Chitwood said.

He noted that IMB has reported every known incident of alleged child abuse by its personnel or others affiliated with the organization that had not previously been reported. IMB has adopted protocols for consistently reporting allegations of child abuse committed by its personnel or others affiliated with IMB to U.S. government authorities, even in situations where there is not a legal duty to do so, and adopted protocols for reporting allegations of child abuse to foreign government authorities. IMB created and filled a full-time, senior-level “prevention and response administrator” position to oversee IMB’s prevention and response efforts in relation to child abuse and sexual harassment. At the completion of the firm’s examination, trustees and leaders accepted and implemented every recommendation presented for changes to IMB’s current policies and practices. 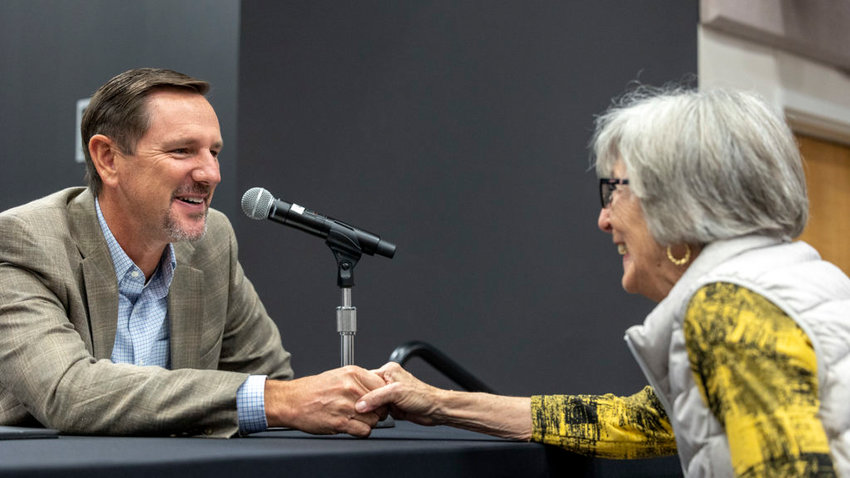 “IMB remains absolutely committed to the ongoing nature of this task as a part of our work both now and in the future,” Chitwood said. “We will do what is necessary to better prevent instances of child abuse and sexual harassment (including sexual assault), and to better care for victims while holding perpetrators accountable.

“We can do better than we have done. We must do better. We will do better.”

Chitwood emphasized that IMB encourages anyone who has been a victim of abuse by IMB personnel to report it to authorities. In addition, IMB invites any victims of abuse by IMB personnel to contact a confidential hotline at (855) 420-0003 or email reports@lighthouse-services.com or advocate@imb.org so IMB can provide compassionate care to that victim and take appropriate steps to ensure the safety of others.

Also, IMB is committed to providing accurate employment references on every former employee. To help make wise and informed hiring decisions, IMB strongly encourages any church, entity or other employer who is considering working or partnering with former IMB personnel to contact references@imb.org to inquire about a reference on that individual.

“Based upon our experience here at the IMB, I also want to encourage every Southern Baptist entity and every Southern Baptist church to be intentional and proactive in reporting abuse, creating policies and procedures to help safeguard against abuse, and to ensure compassionate care for victims of abuse,” Chitwood said. “It is difficult, but we are incredibly thankful that we have done it.”

“As the SBC Executive Committee is currently dealing with this issue, I have encouraged them and continue to encourage them to move forward quickly and decisively with the external investigation,” he said. “In that, they will ensure transparency, regain any lost trust, provide respect and care for victims, and preserve the cooperative mission work of Southern Baptists upon which 6,000 adults and children who have left kin and country depend, laying their lives on the altar of the Great Commission as our missionary families.

“Whether we are talking about efforts to prevent abuse and care for victims, efforts to grow our mission force, grow our revenue, or provide for our retirees, all of these things are various means to a supreme end. That end is the fulfillment of the Great Commission.”

On Sept. 30, IMB closes the books on the best financial year in its history, marking a second year of growth in the Lottie Moon Christmas Offering. Adding the gifts received for specific Lottie projects to that offering total, Southern Baptists have met and exceeded the $175 million offering goal set for 2020-21 in partnership with Woman’s Missionary Union.

The official launch date for the 2021-22 Lottie Moon Christmas Offering is Oct. 1. Churches can visit IMB.org/LMCO to find new resources for their mission offering.

Chitwood and Price Jett, IMB’s chief financial officer and treasurer, introduced the 2021-22 proposed budget, balanced with receipts and expenses both projected at $262.2 million, a $6.9 million increase from the previous year’s budget.

Chitwood also reported evidence of God’s favor in IMB’s finances. In 2018, IMB had enough money set aside to honor only three years of financial and benefit commitments to retired missionaries and staff. During the past three years, IMB has prioritized saving enough to fully fund those commitments for the duration of retired missionaries’ lives, a provision that, “as far as we know, has not been done before at the IMB,” Chitwood said.

Trustees expressed gratitude for the service of an active field worker who died Monday, (Sept. 27), from cancer. The worker, who served in an elevated security location, could not be publicly identified for the security of his family and the national partners with whom he worked.

Trustees also expressed appreciation to families who bestowed nearly $1.5 million in estate gifts to support IMB missionaries around the world.

“Three years ago, Michelle and I came to the IMB with a sense of calling that I have tried to communicate to our missionaries in these words: ‘God has called us here to do everything we can do to ensure that you have everything you need to do what God has called you to do in making disciples of all nations,’” Chitwood told trustees. “But it isn’t just us. We have a job to do, a part to play, but so do you – and so does every Southern Baptist. If God hasn’t called you to go, He has called you to send and support those called to go.

“We cannot slow down. We cannot be distracted. We cannot be divided. We must not be deterred. The vision of heaven is not yet fulfilled. The nations are waiting. We still have work to do.”

The next Sending Celebration for new IMB missionaries will be Nov. 8 at First Baptist Church in Columbia, S.C., in conjunction with the annual meeting of the South Carolina Baptist Convention.