Living in a world of selfie-ness 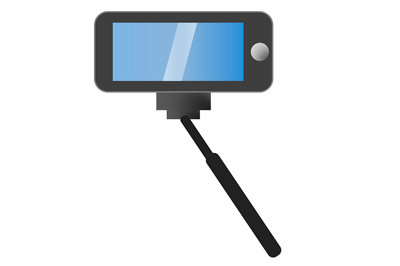 In my four decades on earth cell phones have gone from non-existent to everyday staple. Computers have gone from the size of a warehouse to the size of a checkbook. Film is obsolete and digital is king. And cameras, except for serious photographers, have morphed from stand-alone devices into apps on smartphones.

People now have the power to research, communicate, organize everyday life, stay up to date on virtually anything, play games, watch movies, and even take pictures on a device that fits in _________. The latter is the focus of much research lately.

Younger adults, teens, and children take a plethora of pictures on one of the two – yes, two – standard cameras on their smartphones. But two cameras on one device? There is some logic and merit to the two cameras.

Take for example Skype and FaceTime, apps which enable a phone call to become a real-time video using the front camera. Of course a higher megapixel (quality) camera on the back of the phone enables the replacement of two devices with one – your phone becomes your camera, too. And then there’s arguably the main reason for front-facing cameras on phones – the “selfie,” which is slang for “self-portrait.”

Selfies are used primarily to post on social media. Posting a selfie sends a non-verbal message to one’s followers such as “look at me,” “please give me a compliment,” or even “I’m lonely.” Whether used to brag, fish for a compliment, or to genuinely celebrate something, the “selfie” can be an indication of a greater need in an individual.

The glorification of self

The world today glorifies the idea of self in marketing, movies, music, self-help resources, and even some prominent pulpits. This has infected modern society with narcissism, or an excessive preoccupation with oneself. Narcissism reveals itself through a self-centered “it’s all about me” attitude. A narcissist’s self-worth comes through public recognition of achievements. People who struggle with narcissism tend to be preoccupied with appearance and what others think. Although there are endless healthy ways to utilize a camera paired with social media on one handheld device, the combination makes for a lightning-fast pathway to narcissism.

Right now a person can log on to Amazon.com and order a “Selfie Stick.” It is the electronic, bluetooth-enabled equivalent of duct-taping a camera to a stick to get a better angle on a selfie! Selfies are serious business! Yet the obsession with selfies can pose a serious threat.

Allen Jackson, long-time professor of youth ministry at New Orleans Seminary, says in reference to selfies and narcissism, “All of this is cultivating a generation of kids who are enamored with themselves.” He warns that young people now “have a false sense of who they are.” Jackson concludes with a sobering warning: “We are setting teens and twenty-somethings up for a fall as adults. And now, it’s time to act, as mentors and teachers in their lives.”

Jackson has discovered evidence from a variety of sources of how selfies can be dangerous. From psychiatrists finding a two-in-three-person correlation between repeatedly posting selfies and body dysmorphic disorder to major corporations passing over young college graduates for more seasoned workers, the evidence is mounting that there are serious psychological issues and future job performance concerns due to narcissism. The younger generation’s work ethic and expectation of raises and promotions without merit is causing human resource managers to take notice.

Is it bizarre that something as seemingly innocent as a selfie can be self-destructive? Perhaps the key, like in most things, is moderation. Selfies are not inherently evil. However, the obsession with showing off every achievement, new outfit, new place visited, or even facial expression can lead to narcissistic destruction of healthy self-esteem, and generally being an annoyingly self-absorbed person of no value to a college, a sports team, or a corporation.

The greatest model for selflessness

Steps can be taken to ensure a bright future. In Philippians 4 Paul writes, “Don’t be selfish; don’t try to impress others. Be humble, thinking of others as better than yourselves. Don’t look out only for your own interests, but take an interest in others too.”

Bringing awareness to issues such human trafficking and Christian persecution will broaden your child’s view of the world around them. Teaching your children to be aware of injustices in the world, notice impoverished people around them, and be on the lookout for peers who may feel left out are very helpful ways to take the focus off self. Volunteering with community service organizations and church mission efforts are great ways to put words in action locally and beyond.

Jesus modeled selflessness. He came to serve and ultimately give His life for those He loved. To place emphasis on His example while de-emphasizing self-love will go a long way toward turning selfies into a private diary instead of a public obsession.

Texas church uses ESL camp to prep Hispanic students for school year
HOUSTON (BP) – Fanny Baltanado planned to spend just six months visiting her new granddaughter in Texas when the unanticipated COVID-19 pandemic thwarted her return to Nicaragua. She would need to find a church home near Humble, Texas. An adult English as a second language class attracted Baltanado in March to Cross Community Church, where she became a regular attendee and in August, helped the church teach ESL to local Hispanic elementary students in a back-to-school camp.

Kemp announces $350 cash assistance to low-income Georgians
ATLANTA – Gov. Brian Kemp announced Monday he plans to distribute one-time $350 payments to Georgians enrolled in certain public benefit programs.  Kemp said the total amount distributed will be more than $1 billion.
Georgia abortion law to remain in effect
ATLANTA – Georgia’s “heartbeat” abortion law will stay in effect while a lawsuit challenging the constitutionality of the law is pending, Fulton County Superior Court Judge Robert McBurney ruled Monday.  The order represents a setback for pro-abortion rights advocates who had argued the judge should immediately block the law while their case against it was pending.