73° F
Thunderstorms
The voice of Georgia Baptists since 1822 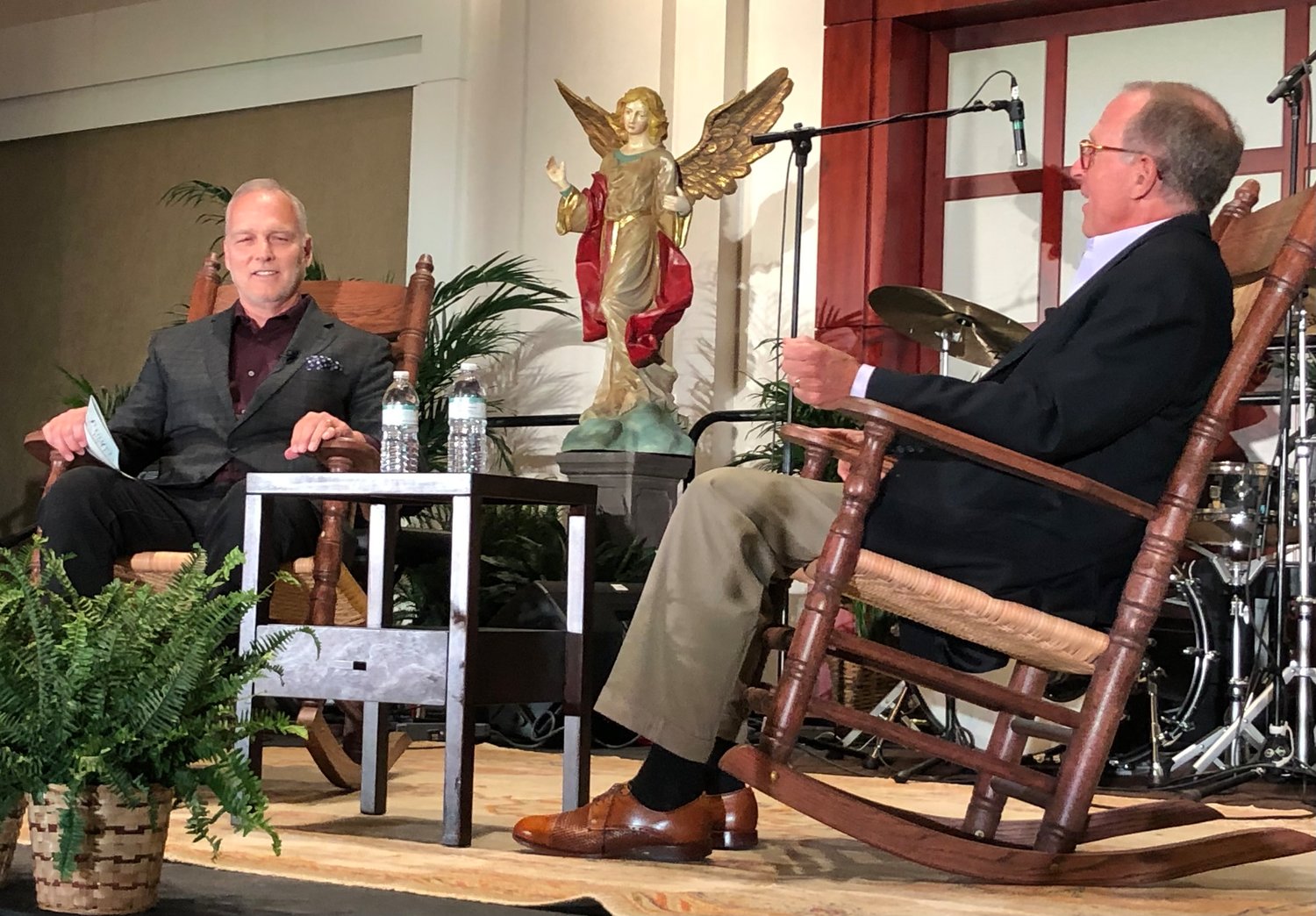 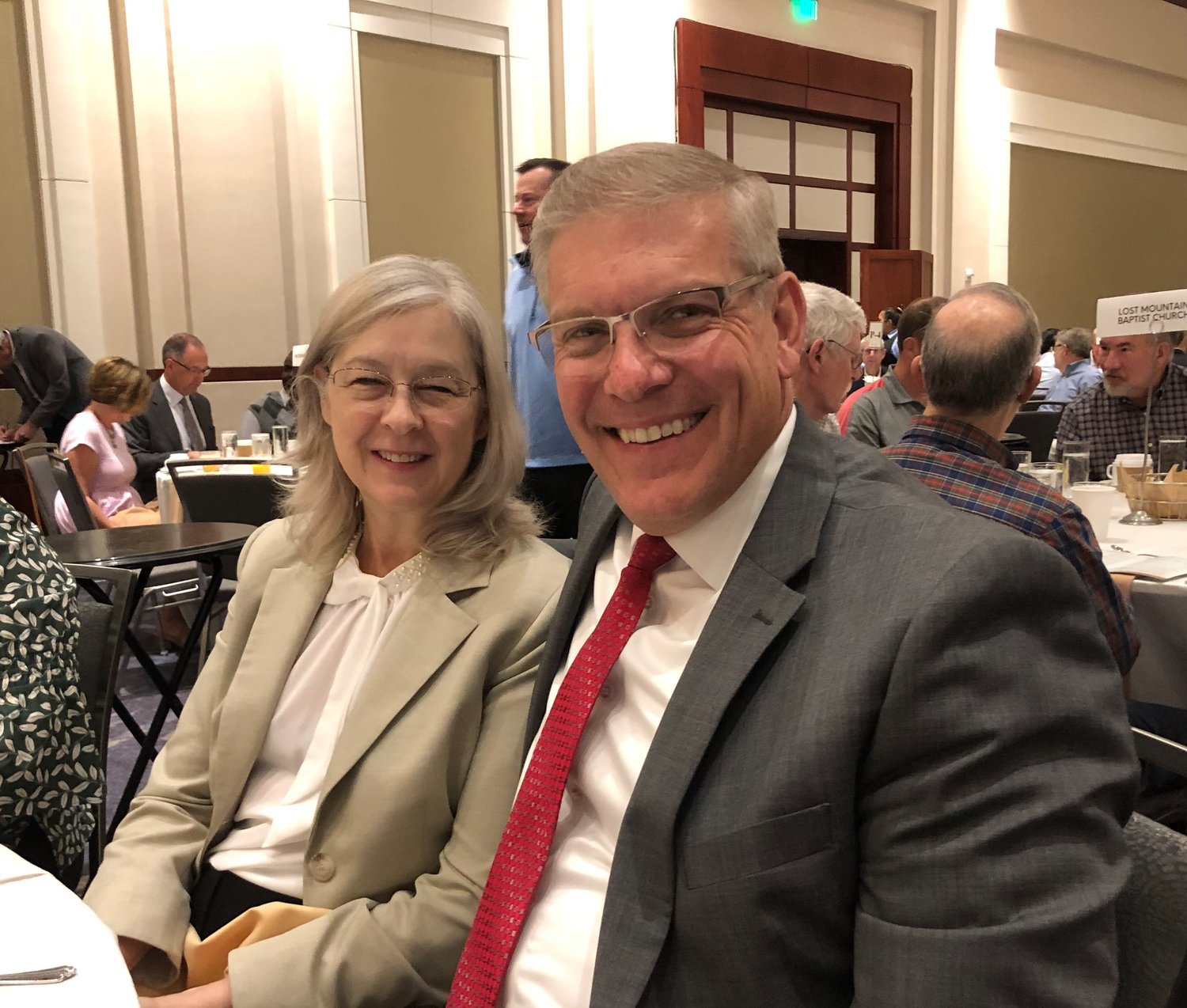 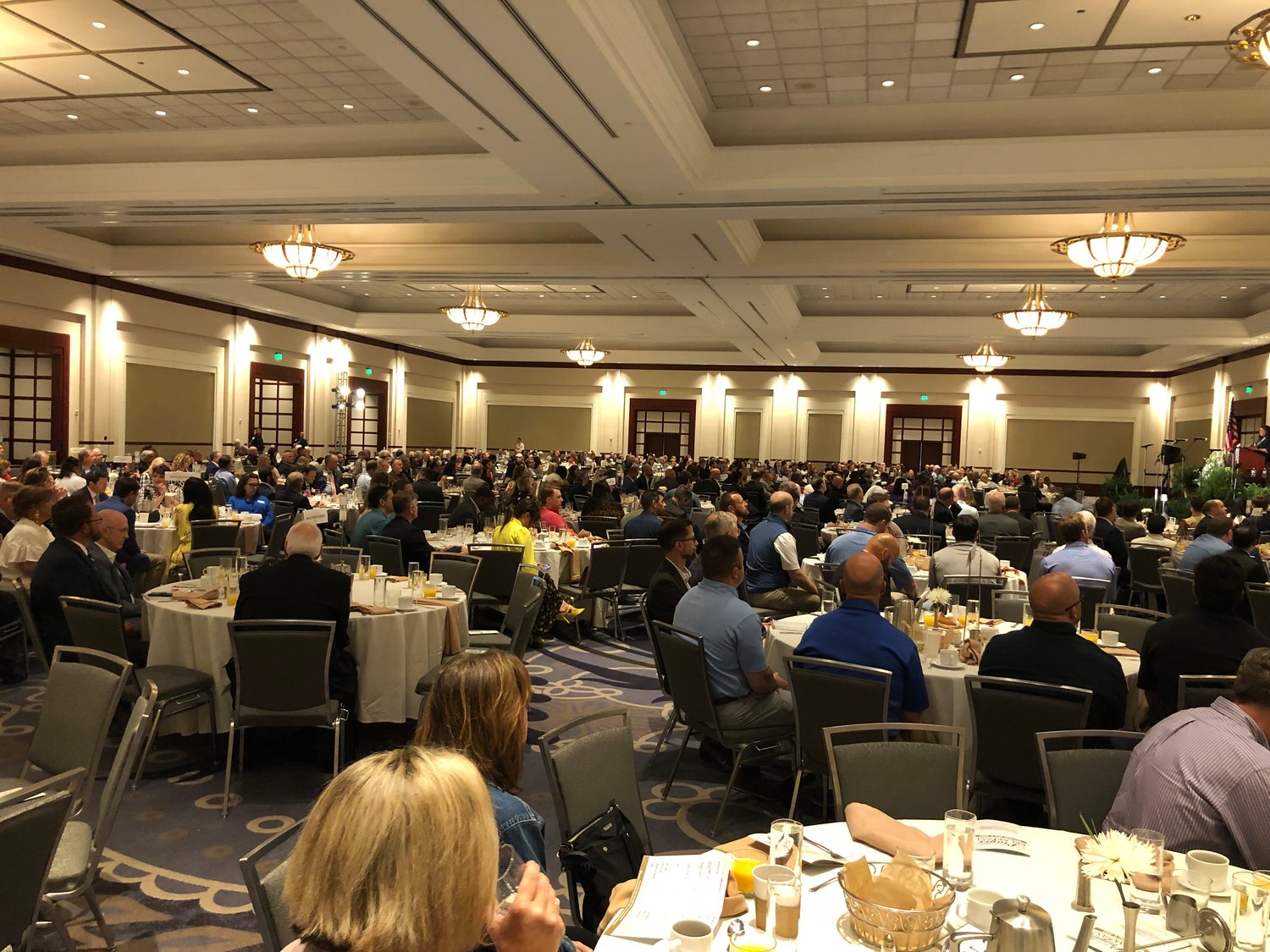 Nearly 1,000 people gathered for the Cobb County Prayer Breakfast on the National Day of Prayer, Thursday, May 5, 2022. (Photo/J. Gerald Harris) 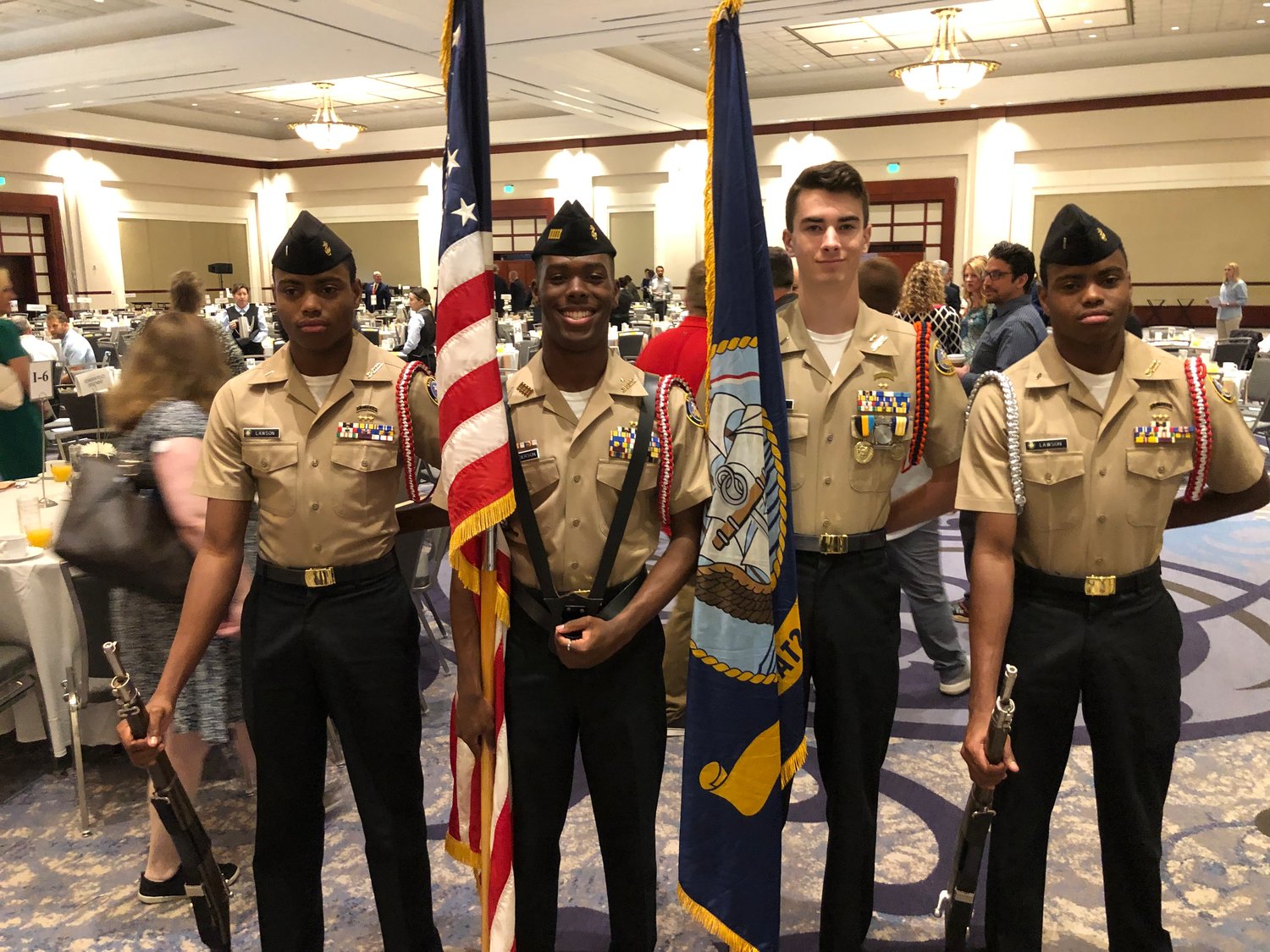 The North Cobb-Harrison NJROTC Color Guard prepare to present the colors for the National Anthem during the Cobb County Prayer Breakfast on Thursday, May 5, 2022. (Photo/J. Gerald Harris)
Previous Next
Posted Thursday, May 5, 2022 4:56 pm
By J. GERALD HARRIS, The Christian Index

Millions of Americans gather in a variety of venues from sea to shining sea on the National Day of Prayer to express their gratitude to God for His abundant grace upon our cherished land, confess our sins of commission and omission, and “praise the Power that has made and preserved us a nation.”

One of the largest National Day of Prayer Breakfasts is the one held each year at the Cobb Galleria across from Truist Park. Since 1985 local citizens from all walks of life have assembled for inspiration and fellowship through prayer. It has grown to an event that attracts approximately 1,000 participants each year.

Daryl Price, Mission Strategist for the Noonday Association commented, “The Cobb County Prayer Breakfast is an incredible gathering of business, government, school, and faith leaders being encouraged to pray together. The National Day of Prayer gathering highlights the regular rhythm of prayer that undergirds and sustains out work. It represents the. Community unity and. The important role of collaboration that make Cobb County a great place to live, work and worship.”

Barry Loudermilk, U. S. Representative from Georgia’s 11th congressional district, remarked, “Just as our Founders relied on God’s Providence to guide and protect them as they fought for independence and freedom, we need God’s divine providence today to preserve our Nation. His wisdom, protection and guidance are provided through our prayers.”

Richard Holden, student minister of East Cobb Baptist Church. In Marietta remarked, “When God’s people come together from different backgrounds, creeds and color, it reminds me of what the population of heaven must be like.”

The Pleasant Grove Missionary Baptist Church of Marietta provided the inspirational music for the breakfast; and the program was accented by the reading of passages of Scripture from Psalm 91, I John 4, and Colossians 2: 6-7. Each reading was followed by fervent prayer and intercession for our nation.

The featured personality for the 38th annual Cobb County Prayer Breakfast was former head UGA football coach and current college football commentator Mark Richt, who was interviewed by Bryant Wright, President of Send Relief of the North American Mission Board. The North American Mission Board also recently announced that Richt is the national spokesman for Send Relief, the compassion ministry arm of the entity.

Wright’s first question prompted Richt to recall an incident that happened when he was the quarterbacks coach at Florida State University under the legendary head coach Bobby Bowden. One of the football players, Pablo Lopez, was attempting to de-escalate an altercation when he was shot with a twelve-gauge shotgun. The twenty-one-year-old NFL prospect who was a buoyant leader and enormously popular was dead on arrival at Tallahassee Memorial Hospital on September 14, 1986.

Richt said that Coach Bowden called a team meeting and said, “Pablo used to sit right there and none of us could imagine he wouldn’t be sitting there in that chair today. You men are young, and you think you are going to live forever – that only old people die."

“I don’t know where Pablo stood in his faith; and I hate that I don’t. However, if it had been you and your seat were empty today, do you know where you would spend eternity. I know there is a God in heaven who loves us, because he sent his Son, Jesus, to die on the cross for our sins.”

Following Bowden’s message to the team Mark Richt visited with the coach in his office and exclaimed, “I know you were speaking to the team, but the Holy Spirit was working on me. I need to be saved. I was living for myself, but Coach Bowden led me to Christ and I have been trying to live for others and Christ ever since.”

Richt also talked about the importance of finishing the drill. He explained, “There were many drills that we designed to make our football players strong, disciplined, and agile. The toughest drill was the mat drill. For this drill there were three stations with strenuous routines to test the players at each station. This drill took an hour with twenty minutes at each station. The coaches would challenge the players by shouting: ‘Do it right, do it hard, or do it again.’ Anyone in the drill who made a mistake would penalize the whole group by making them do it again.”

One of the biggest tests in Richt’s first year as coach of the Dawgs was against the Tennessee Volunteers. Georgia had not won at Neyland Stadium in Knoxville since the era of Hershel Walker. It was a hard-fought game and Tennessee led 24-20 with less than a minute to go. Georgia marched the ball down the field to the six-yard line with only seconds remaining in the game. Richt called a play-action pass to Haynes; the fullback and Georgia won the game.

In the locker room following the game, Richt silenced the celebration long enough to say to his players, “I’m proud of you.”

One of the players shouted, “We finished the drill.”

Coach Richt told the prayer breakfast crowd, “No matter what you choose to do in life, if it is noble and worthwhile make sure you finish the drill.”

Wright asked Richt about his health challenges and the heralded coach talked about the symptoms that led to his diagnosis, but explained, “I look at Parkinson’s as a light affliction, because I know one day, I will get a new body. I have hope, but not in the things that are temporal, but. In the things that are eternal and the hope of being with Jesus for all eternity.”

Richt also expressed his concern about the situation in Ukraine and spoke of the blessing of having adopted two children years ago from that war-torn nation.

Richt’s testimony was so clear and powerful that Wright invited those present who needed Jesus to pray and invited Jesus to forgive their sins and come into their hearts.

Those who were present for the Cobb County Prayer Breakfast can easily understand why it is one of the largest and most inspiring such events in the nation on the annual National Day of Prayer.