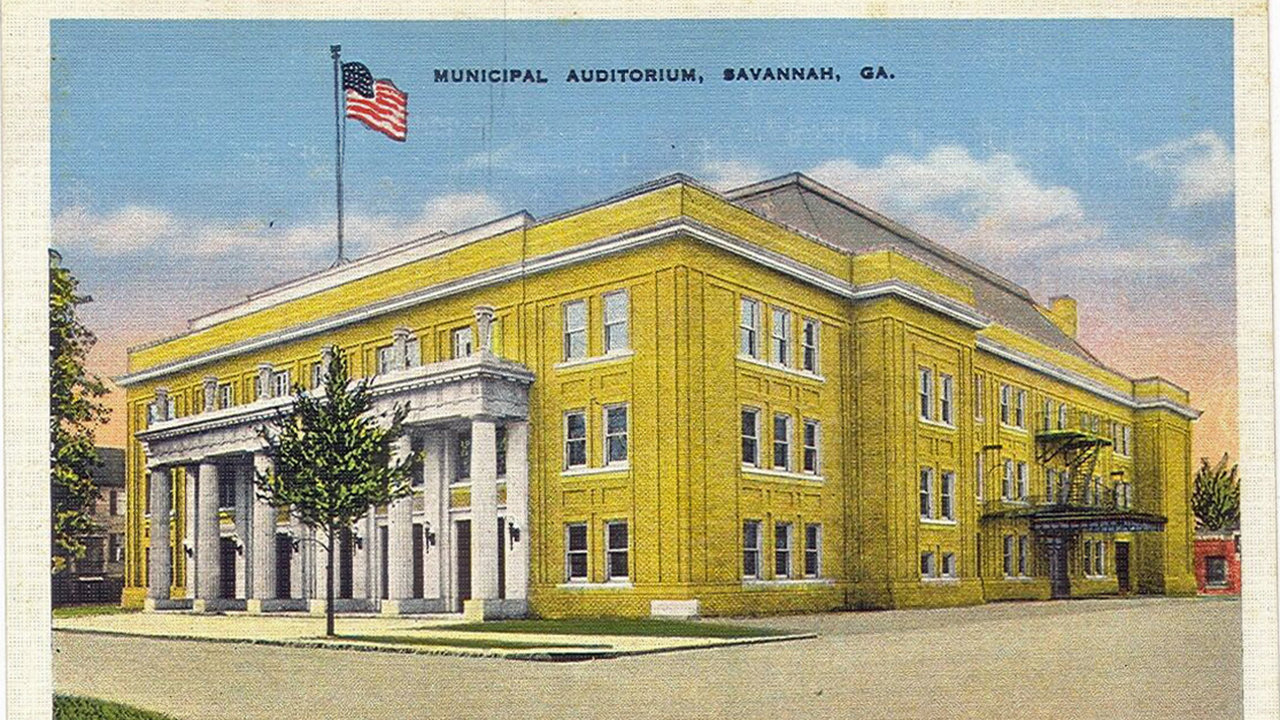 The Savannah Municipal Auditorium was the site of the 1946 Joint Fellowship Meeting between the General Missionary Baptist Convention of Georgia (African American) and the Georgia Baptist Convention (white). The only such meeting that has ever occurred between the two bodies. (Source: Internet)
Posted Monday, February 22, 2021 4:58 pm
Charles Jones

Take the name of Jesus with you, child of sorrow and of woe . . . It will joy and comfort give you, take it then where ’ere you go. . . Precious name, O’ how sweet, hope of earth and joy of heaven

The familiar message of this beautiful old hymn greeted messengers as they entered the old Savannah Auditorium late on a November afternoon. It was planned as a night of worship, celebration, fellowship, and goodwill . . . it stands as one of the most unusual meetings of Baptists to take place in the segregated South. It was a night that has long been forgotten . . . that should be remembered today.

The year was 1946, a year that saw “citizen soldiers” coming home following World War II. Thousands of returning G.I.s married their sweethearts. There were new families, new careers, many taking advantage of the G.I. bill furthering their educations or purchasing homes. Across much of the United States it was a time of great hope and optimism.

Child of sorrow and of woe

But in other corners of the nation, optimism was on the wane. Racism was on the rise as it had been after both the Spanish American War and World War I. African Americans returning from the war found the freedoms they fought to protect were once again being denied. Instead of hope, there was growing fear in African American communities, especially in the South.

Tragically, early in the year there was a major race riot in Columbia, Tennessee. It left 3 dead and many more wounded and more than 100 sitting in jail cells. National Guard troops remained in the city for a week to keep the peace. 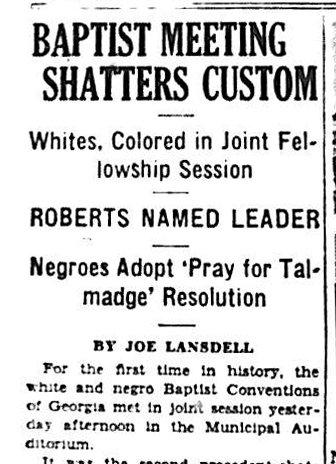 News of this meeting, at a time when racial tensions were running high in America, was carried in papers across the county, including the New York Times and the Chicago papers. (Charles Jones: UGA Library, Athens, GA)

In late July, the Moore’s Ford lynchings took place near Athens, Georgia. It was one of the last lynchings in the south. Two African American couples were abducted and murdered by a mob; both men were veterans who had been home less than a year. The investigations of the murders left more questions than answers. No one was ever charged.

The aftermath of the Columbia Riots and the Moore’s Ford lynchings resulted in outrage across the country. In response to these, President Truman would establish the President’s Committee on Civil Rights. It became a turning point in the Civil Rights movement. But on that November evening the actions by the president had not yet happened . . . the future was uncertain.

Adding to the racial tensions in Georgia were the recent actions of America’s first neo-Nazi organization called the Columbians. The group had incorporated in Atlanta in August. To join, one only had to pay a three-dollar membership fee and to openly profess hatred of Blacks and Jews. Dressed in khakis they patrolled the streets of Atlanta in gangs seeking to enforce “neighborhood racial boundaries.” They could be seen marching in goose step fashion in demonstrations and in other areas of the city.

In late October, one of their gangs attacked a black man walking through a “contested neighborhood.” Had the police had not arrived and arrested the attackers, the man may have been killed. About a week later, shortly before the Savannah fellowship meeting, the Columbians were in the news again for demonstrating in front of the home of an African American couple who had purchased a home from a white family.

Take the name of Jesus ever

This fellowship meeting was the only meeting that has ever taken place between Georgia’s largest white and black Baptist Conventions. This was even more significant because racial tension was at a boiling point across Georgia at the time.

The week before, the two Conventions were scheduled to meet separately in Savannah, the editor of The Christian Index, mused in a column that it would be good if the two conventions could have a joint fellowship meeting. A motion to that effect was made as the GBC convened. Arrangements were made for the meeting to take place at the Savannah Civic Center later that evening.

Headlines in an article in The Christian Index the week following the Savannah GBC and the Fellowship Meeting. (Charles Jones: Georgia Baptist Archives, Duluth GA)

When messengers arrived at the Savannah Auditorium, the music, greeting them, began as a prayer meeting was concluding. African American pastors gathered early to ask God’s blessing on the evening. As they arose from their knees they broke into song. These were poignant words, considering the fear gripping much of Georgia.

What was the message?

Word quickly spread of this remarkable gathering. Inquiries came from Chicago to the Savannah Morning News requesting “a thousand words on the event.” An Associated Press reporter was present. The following day the New York Times ran an article under the dateline: “Savannah, Georgia, November 12 (AP): NEGRO, WHITE BAPTIST MEET IN JOINT MEETING FOR FIRST TIME IN HISTORY TO ‘PRACTICE GOOD WILL.’” Papers all over the country ran articles on the meeting.

It was the 75th Anniversary of the General Missionary Baptist Convention and the 125th of the Georgia Baptist Convention. Few if any of those gathered that November evening are living today, but hopefully they are living the final verse of that old hymn, “At the name of Jesus bowing, when in heaven we shall meet, King of kings, we’ll gladly crown Him when our journey is complete.

The events of that night have been forgotten, but we should remember the faith, love, courage, and resilience that was demonstrated that night. Then Baptists should live it out by actions each day for the sake of that precious name.