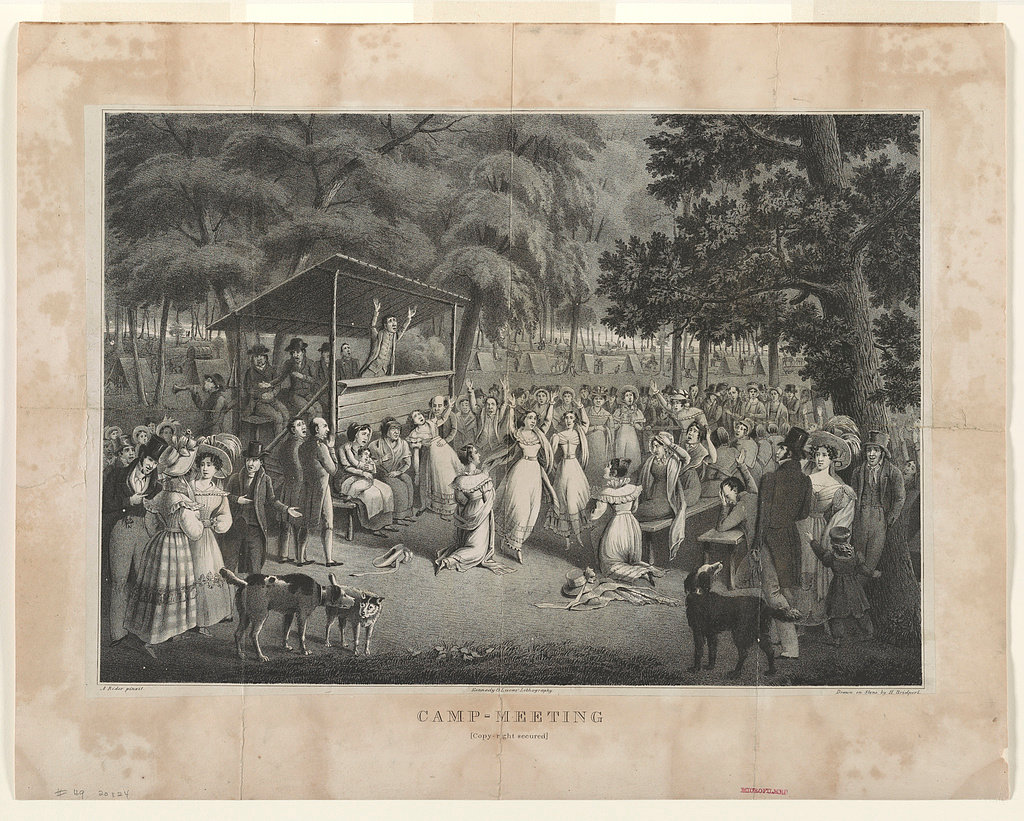 The Spirit of the Lord seemed to move upon the hearts of the people – Mrs. A.P. Hill

With an inconspicuous beginning, Georgia’s Great Revival of 1827-1828 represented the high-water mark of the Second Great Awakening in Georgia. The revival, which was one of several waves of revival during the Second Great Awakening, began at camp meeting held in conjunction with a Baptist Association meeting. During the revival Baptist membership and churches doubled in the two-year span. Although this was much more than a “Baptist” revival, all denominations in Georgia grew as the wave of revival swept across the land.

The revival was traced to a series of women’s prayer meeting organized months before by Charlotte Sherwood at the Edenton Baptist Church. She was sister of Adiel Sherwood who was preaching when the revival broke at the Ocmulgee Association meeting in 1827. The meeting was held at the Antioch Baptist Church in Morgan County. Nearby the “Sandtown” community had so many conversions they changed their name to “Newborn.”

Among those converted was John Dawson, who would become a leading Baptist preacher editor and educator. Thomas Stocks, a layman and politician who became President of the Georgia State Senate and enabled the charter for Mercer University to pass through the Georgia Legislature after years of resistance from those who did not want UGA to have any competition. Stocks would become the third President of the Georgia Baptist Convention serving from 1846 to 1856. Samuel Davis an active layman whose daughter Lurana would marry Thomas Jefferson Bowen and become one of Georgia Baptist’s first SBC foreign missionaries, pioneering work in Nigeria and Brazil.

This revival had a significant impact on the struggling Georgia Baptist Convention organized five years earlier. At the time, the convention was dealing with a growing division between “missionary and anti-missionary” sentiments. A division which would be played out in 1836, but not before the struggling Convention had found a new energy, purpose, and direction in the wake of revival.

The most prominent feature of these revivals was “the camp meeting.” Most were organized during the “laying bye” season in mid to late summer when the crops were well established but before harvest. In those weeks farmers had some respite from heavy labors. Associational meetings and the Georgia Baptist Convention often included a “camp meeting.”

Camp Meetings were more than religious events; they were social and economic events. Besides preachers, politicians, pick pockets and pan handlers were in no short supply. Vendors hawked food, beverage, and other necessities. Some advertisements included a disclaimer that only reputable vendors would be allowed, and security would be provided. It was common to see an advertisement in newspapers seeking a horse stolen or the return of something “lost” at a camp meeting. 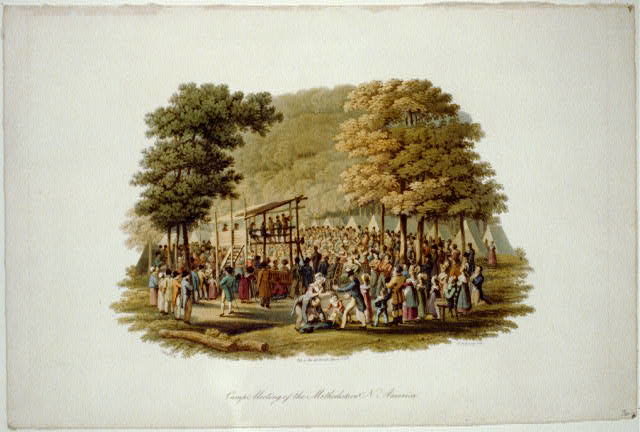 The meetings were typically outdoors.

Unless it was a “denominational” meeting, camp meetings usually included preachers from several denominations. Typically, the associational meeting met in the church “meeting house.” Preaching stands or brush arbors were erected on the grounds to accommodate the larger crowds for morning and evening services. When the revival broke at the Ocmulgee Association meeting in 1827 there were over 4,000 people in attendance.

Camp meetings were, as most churches, integrated. It was not uncommon to see an advertisement in local papers seeking a slave who had “runaway” during a camp meeting. As noted above, slaves were free to expressing themselves during worship. It is reasonable to assume that any of the number of Georgia’s African-American Baptist preachers would have preached during camp meetings.

During the camp meetings the practice of a public altar call, sometimes called the “anxious seat” or “mourners’ bench” began to be incorporated into worship. Music was sung acapella. With the introduction of “Sacred Harp” singing schools it must have been a beautiful and unique experience of worship when thousands of voices blended into four-part harmony of praise.

Some of the Georgia revivals of the Second Great Awakening

“In 1787 there was a glorious revival. Thousands attended the word,” according to Georgia Baptist pastor Abraham Marshall. The revival had a unifying effect among Baptist. In 1787 the Regular Baptists and Separate Baptists of the south merged laying the foundation for Baptist cooperation in the modern mission movement just emerging as English Baptist missionary William Carey sailed for India the same year.

In 1802 the Georgia Association reported 732 baptisms and the Sarepta Association recorded its second highest number of baptisms in its history recording 1,050. Between 1801-1806 Jesse Mercer helped organized the Powelton Conferences, an early attempt at a General (State) Association (Convention). These Conferences promoted itinerant preaching, including to the Creek and Cherokee, and church planting. They also resulted in the first attempt at a Baptist school, Mount Enon Academy (1806-1812).

Possibly one of the greatest benefits of these meetings was to help create a network of mission minded leaders across Georgia who were prepared to embrace missions and organize a State Convention when the time was right. 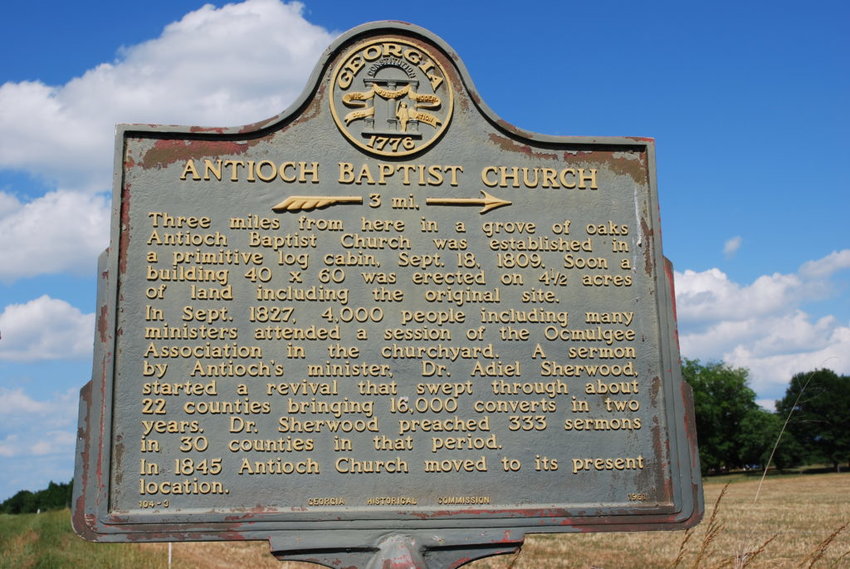 These revivals coincided with the New Madrid earthquakes which took place in 1812, the most powerful earthquakes recorded in North America. For months preceding this revival there had been a call for a monthly “Concerts of Prayer” across the Baptist Associations in Georgia. In 1812 the Savannah Association recorded 1,500 baptisms and the Sarepta Association set a record which still stands today of 1,265 baptisms.

In 1812 Luther Rice, a Congregationalist missionary who along with his colleague Adoniram Judson had adopted Baptist tenements, returned from Burma seeking Baptist support for foreign missions. Rice traveled across the nation including Georgia (he would later call Georgia his “winter home”) seeking support.

In 1814, only two years after Rice’s return to America the Baptist Triennial Convention, a national Baptist Convention, was organized. It embraced foreign and domestic missions and soon added an educational focus. It is inconceivable that Baptists could organize anything that fast except there was a spirt of revival drawing them together!

All the revivals laid the foundation for expanding cooperation and work among Georgia’s missionary Baptist affiliated with the Georgia Baptist Convention. This revival fortified and prepared Georgia Baptists for a bitter division between missionary and anti-missionary factions which came to a head in the years following the establishment of Mercer University. It secured the survival of the fledgling convention.

The Lasting Impact of Revivals

Each wave of revival had a cause and effect. Prayer preceded the revivals. Unity and empowerment followed. Progress was made as new ministries to spread the gospel developed and believers were strengthened.

At the start of the Second Great Awakening, Georgia Baptists consisted of 15 small rural churches, all members of the Georgia Association with the total of a few hundred members. By 1835, following the peak of the revivals, Baptists had become Georgia’s largest denomination with 583 churches in 21 associations with 41,800 members.

The revivals of the Second Great Awakening led to the support and establishment of the modern mission movement, including the Triennial Baptist Convention (1814) and Baptist State Conventions (1821ff.). It led Baptist to establish higher education, Sunday Schools, publication societies, the temperance movement, and other ministries.

More specifically in the south much of this energy was focused on the support of foreign, domestic, and state missions and the establishment of schools like Mercer University. In the northern states it generated support of the emerging mission’s movement, education, and was a driving force behind the growing abolitionist movement.