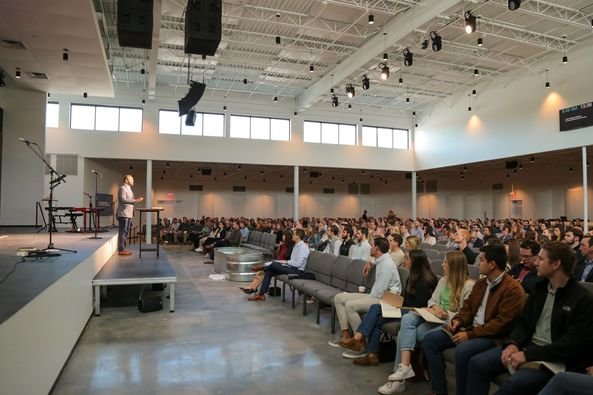 Pastor Jason Dees preaches to a full house in one of three services on the occasion of the grand opening of the new worship center at Christ Covenant. 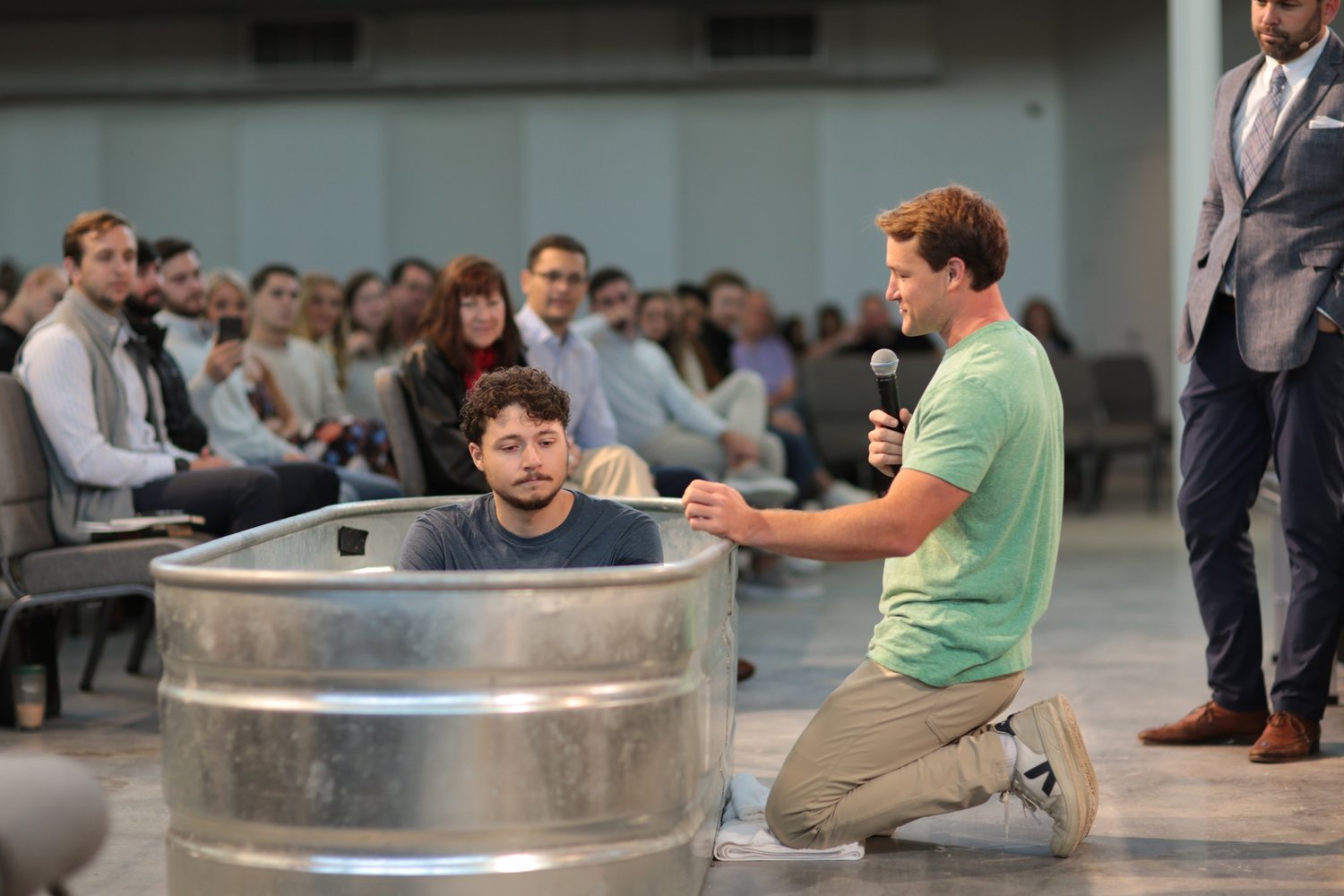 The baptism of new believers has become a regular occurrence at Christ Covenant. 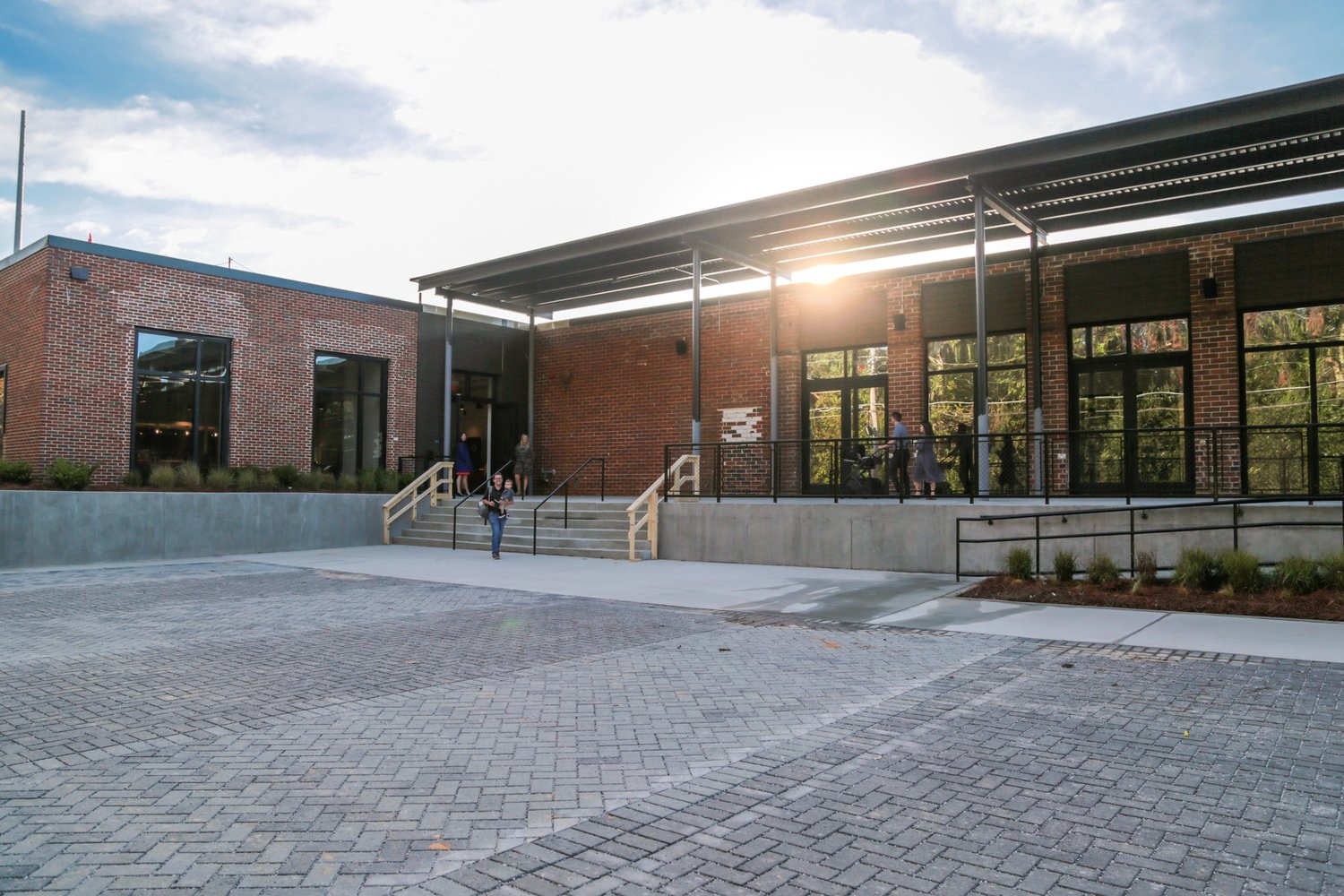 The outside of Christ Covenant’s refurbished building is clean, fresh and inviting. 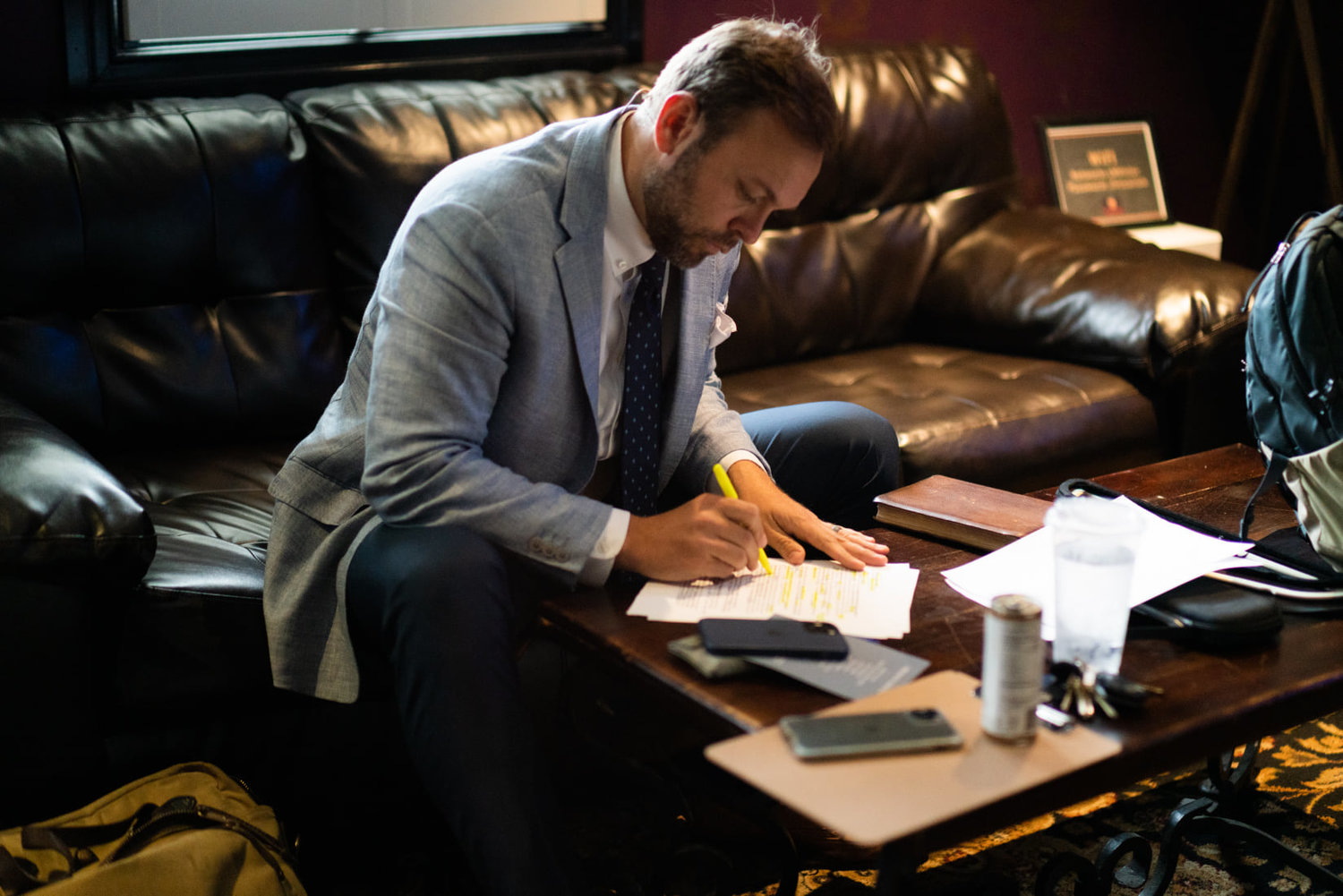 Pastor Dees spends hours crafting his sermons to honor Christ and feed the flock of God.
Previous Next
Posted Friday, November 11, 2022 9:50 am
By J. GERALD HARRIS, The Christian Index

ATLANTA – On Sunday, Nov. 6, with the church barely five years old, Christ Covenant celebrated the grand opening of its new facility with an attendance of 1,750 individuals. It was a monumental day in the life of one of the nation’s fastest-growing congregations.

It is no less than incredible that the church has experienced phenomenal growth at the same time a pandemic paralyzed many churches across the nation.

Christ Covenant, a Georgia Baptist Church planted in the prestigious Buckhead area of Atlanta is nothing short of a miracle. It is proof that God still answers prayers because many people have been praying that a formidable, viable, Christ-centered church grounded in God’s Word would emerge inside the Atlanta perimeter.

On Nov. 8, 2007, The Christian Index published an article titled “Temples in, Churches Out?” The article specified that in 1980 there were 88 functioning Georgia Baptist churches inside the perimeter reaching 12 percent of the population. The article specified that only 40 of the original 88 GBC churches remained inside the perimeter in 2007. While other churches had been added over the 27-year span of time they were only reaching 4 percent of the population in 2007.

While Atlanta has some wonderful churches, the Christian witness inside the I-285 beltway has been diminishing; and the article reported that Muslim mosques, Hindu temples, Mormon Wards, and other religious edifices were becoming more and more prominent. Consequently, many Baptists have been praying that a church with great visibility and influence could rise to become a lighthouse of faith and truth and help serve as the conscience of the city. Christ Covenant may very well become that church.

Under the capable leadership of Pastor Jason Dees, the church has experienced remarkable growth in a very short period of time. In 2012 while pastoring in Covington, Ga., Dees met David Deeter, of the Fraizer & Deeter Accounting Firm, at a Passion Conference. Dees recalled, “David talked to me about the need for a Gospel-centered church focused on disciple-making and being a true Christian community in the Buckhead section of Atlanta.” The first suggested name for the church was Peachtree Community Church, but that never materialized, likely because of the proliferation of “Peachtrees” in Buckhead. For example, there are fifteen streets in Buckhead that include the name “Peachtree.”

Deeter’s comment about the need for a church in Buckhead resonated with Dees, because as he later explained, “Even then I felt like I would be responsive to an opportunity to be in a metropolitan church where I could have an opportunity to impact the culture.” As we all know, that seemed to be the Apostle Paul’s “modus operandi” as he repeatedly sought out the largest cities to preach the Gospel. James Boyce, the great Presbyterian minister, in his book Two Cities: Two Loves suggests that if even ten percent of the evangelicals of the nation moved into the largest cities and lived out lives of love, truth and servanthood, the culture would be fundamentally changed.”

Buckhead is an affluent community with a population of over 100,000 with millennials being the area’s largest generational cohort. Most of the residents of Buckhead are college graduates; and it is one of the nation’s largest urban, mixed-use development areas.

Dees’ encounter with Deeter, now an elder at Christ Covenant, initiated additional conversations with others including Jim Haskell, who has served as a Southern Baptist church planting strategist. The conversations, prayers and soul-searching converged in 2016 when Johnson Ferry Baptist Church in Marietta and the North American Mission Board partnered together to create resources for a new church in Buckhead.

In June of 2016 Jason Dees and his wife, Paige, who at that time were serving Valleydale Church in Shelby County, Ala., with 2,000 members were convinced that God was calling them to come to Atlanta to plant a church in Buckhead.

Dees explained, “By December of 2016, thirty-four bold men and women signed on to be the initial launch team of Christ Covenant. We started having regular pre-launch meetings in February of 2017. We signed the charter to officially start our church on August 27, 2017. That was an emotional time with tears of rejoicing; and then our church was publicly launched on September 17, 2017, with 73 charter members. Subsequently, small groups were started, numerous ministries were formed, and a missional engagement with the city and world was initiated. Today the church has 972 members.

“Through all of this, people were coming to know the power of the Gospel and lives were being transformed. Our church members were understanding the power of covenant community and living as ambassadors for Christ in our city and our world. At the end of the first year, Christ Covenant had 170 members who were faithfully equipping and encouraging one another for God’s eternal purpose and mission.”

One sure way to measure a church’s faith, commitment and joy is to observe the degree to which they give, and the church’s giving has grown from $100,000 in 2017 to nearly $5 million in 2022. The church started with two small groups in 2017 but has seventy-one small groups today. This staff has increased from 5 to 29 in the past five years.

Christ Covenant has excelled in reaching young families and in 2022 the church averages 168 children, 80 students and 375 young adults in attendance each week.

Sutton Middle School in Buckhead became the regular meeting place for the church for much of its infancy. However, there were times when the school was not available for one reason or another. In 2020 the church met for worship in nine different locations. However, the pandemic prompted the church to progress from no streaming to a fully efficient and professionally produced live streaming of their services.

In reflecting on Sunday’s grand opening and the exponential growth of the church, Deeter stated, “There are not many examples of this happening today. Somebody should watch what is happening at Christ Covenant and carefully study the dynamics that is making it work. Jason Dees is amazing. He is so smart. He is a theologian, has limitless energy, an incredible work ethic and is a natural leader.”

The rapid growth of Christ Covenant and the depth of commitment that characterizes so many who are a part of the fellowship is convincing evidence that God is mightily at work in this burgeoning fellowship of believers. However, the leadership of the staff and the faith, winsomeness, surrender and vision of Jason Dees has helped to make it all happen, but the pastor would say, “To God be the glory.”