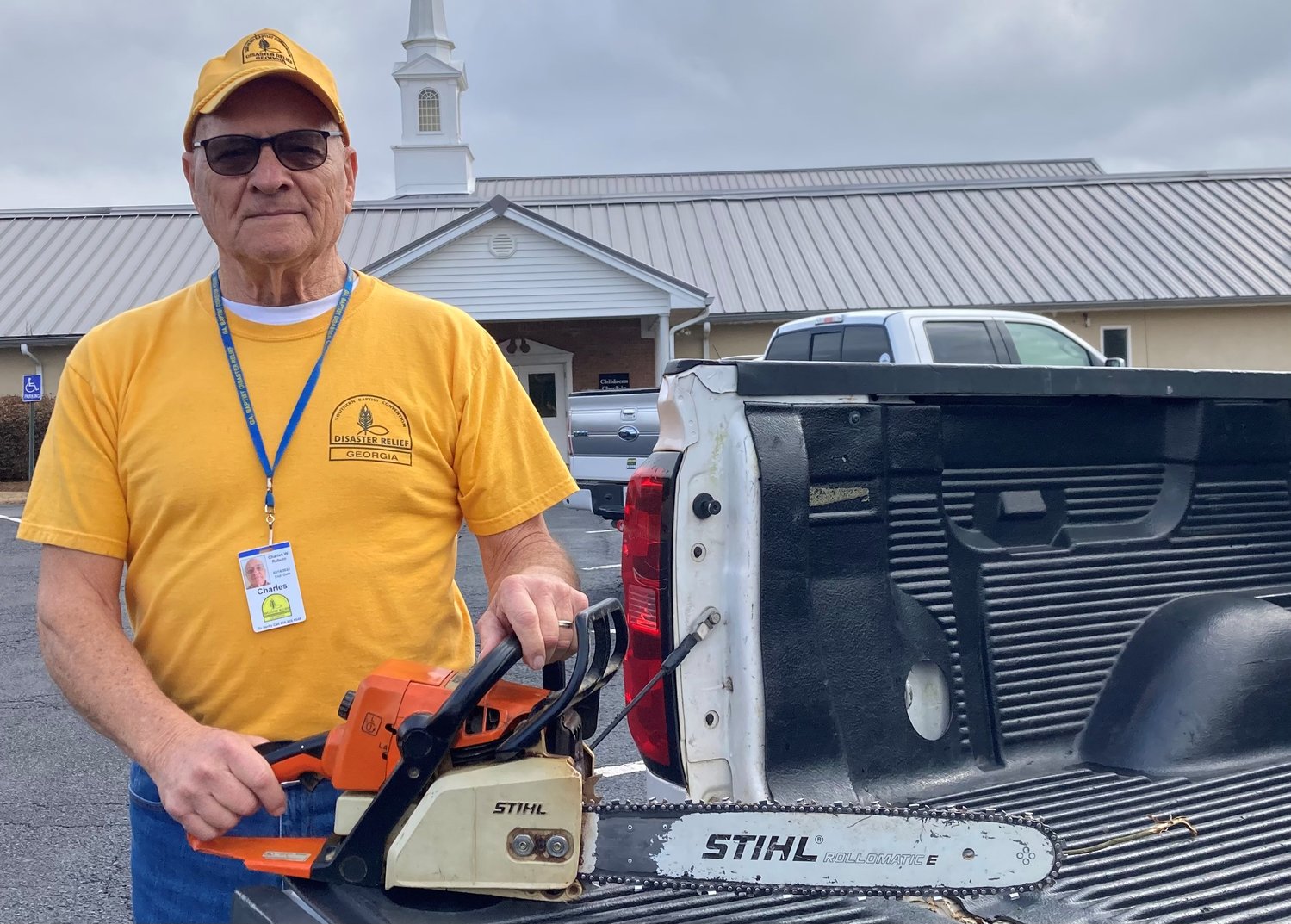 Charles Raburn poses with his chainsaw. The 79-year-old was among those deployed to Griffin to help cleanup tornado damage last week. 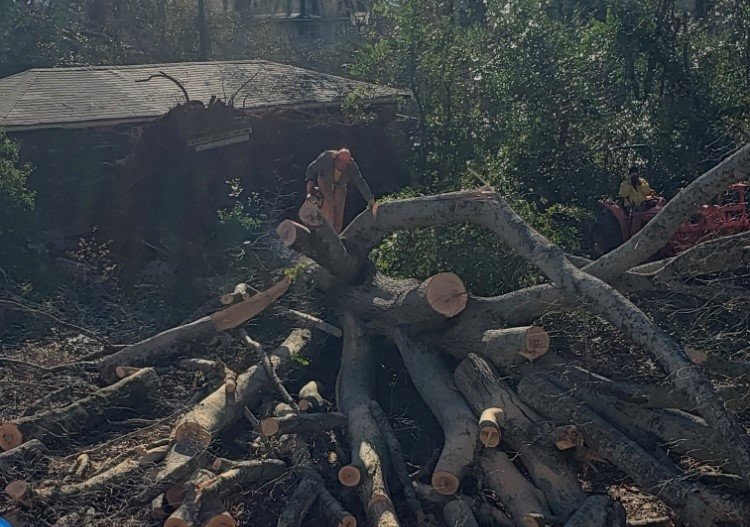 GRIFFIN, Ga. – Charles Raburn and his chainsaw were dwarfed by the massive branches of a giant oak toppled by one of the tornadoes that hit Georgia last week.

In a breathtaking scene, the Georgia Baptist Disaster Relief volunteer stood high above a soggy lawn in Griffin, among those branches in a tree that measured nearly 20 feed around at its base.

Raburn wasn’t intimidated. He whittled the oak, which had damaged two Griffin homes and a garage when it fell, down to size one piece at a time.

Raburn, a Cedartown resident who retired from a north Georgia steel mill nearly two decades ago, is one of an army of Georgia Baptist Disaster Relief workers, most of them retirees, who mobilized after the latest round of tornadoes hopscotched across Georgia, damaging homes and businesses in several communities.

“I’ve always had a desire to help people,” Raburn said Wednesday. “Disaster Relief is a great way to do that.”

It's not unusual for a Georgia Baptist Disaster Relief crew to be made up entirely of retirees, often in their 60s, 70s, and 80s. Without work obligations, they're able the ones who  are able to deploy at a moment's notice to  help people caught up in calamities.

Raburn, a member of Victory Baptist Church in Rockmart, said Disaster Relief work not only allows him to bring hope, help and healing to others but also helps to keep him spry. He has been mobilized to help victims of hurricanes, tornadoes, ice storms and floods all over the country.

“God has blessed me with good health, and I want to stay busy for Him,” Raburn said. “I want to continue doing this until I’m so old I can’t do it any longer.”

“It worries me, but I’m glad he enjoys it,” she said. “He’s just one of the best Christian men I’ve ever known.”

One of his fellow Disaster Relief volunteers, Jeff Carter, said Raburn is a hard worker, an expert with a chainsaw, and has the dexterity of an 20-year-old.

“I’ve been knowing Charles for probably about 50 years, and he’s fearless when it comes to climbing and cutting trees,” Carter said. “In his younger days, he worked for a tree-cutting service. He could climb barehanded, no ropes or nothing.”

Disaster relief work is physically taxing. Sometimes the volunteers are called out in the coldest days of winter when an ice storm has struck. Sometimes they’re called out on the hottest day of summer when a hurricane has blown ashore.

In the past year, Georgia Baptist Disaster Relief volunteers have deployed to Kentucky to help tornado and flood victims, Florida to help hurricane victims, Colorado to help wildlife survivors, and overseas to Poland to help refugees who fled Ukraine when Russia invaded their country. They also had a series of deployments within Georgia.

“To drop everything you’re doing on the spur of the moment and rush off to a disaster zone to help hurting people, that makes you a hero," he said. "To leave a comfortable home and a soft bed to go stay in a gymnasium and sleep on a cot so you can assist people in some of the worst moments of their lives, that makes you a hero.”

When Jeff Carter is pulling together a team, Raburn is always among his first calls.

“He has always been my go-to man on saw operations,” Jeff Carter said. “He’s in good shape for anybody, but he's in great shape for a 79-year-old.”

For Southeastern Seminary student and his family, sharing the gospel means being intentional