Analysis: Crisis in Ukraine a showdown of two world views 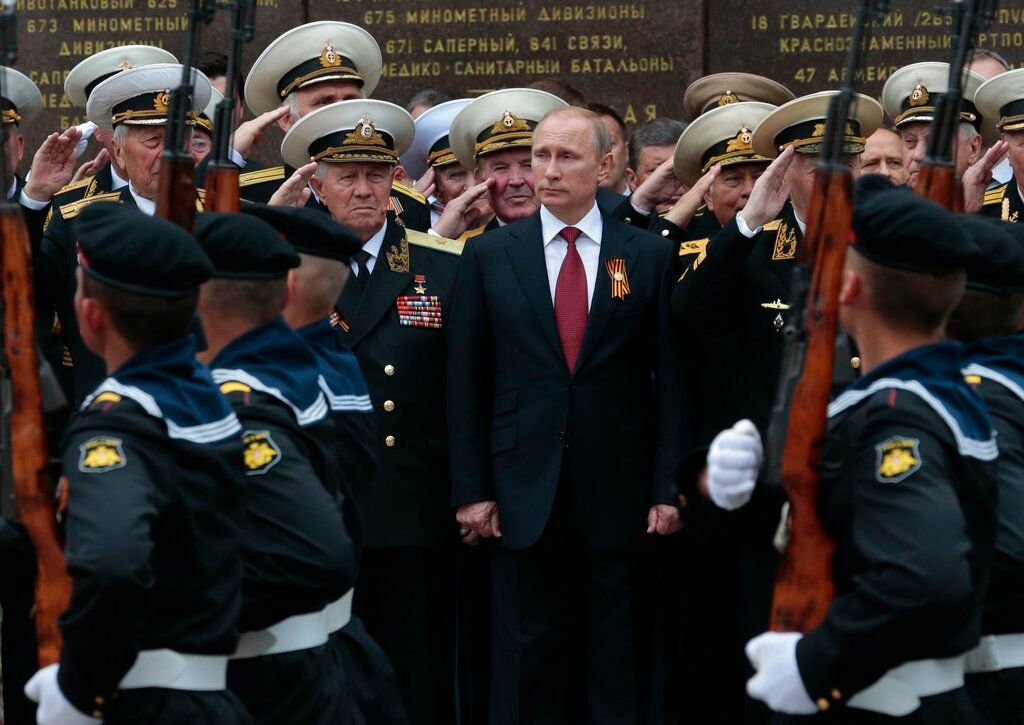 FILE - Russian President Vladimir Putin attends a parade marking the Victory Day in Sevastopol, Crimea, on May 9, 2014. Russia's present demands are based on Putin's purported long sense of grievance and his rejection of Ukraine and Belarus as truly separate, sovereign countries but rather as part of a Russian linguistic and Orthodox motherland. (AP Photo/Ivan Sekretarev, File)
Ivan Sekretarev
Posted Monday, January 24, 2022 8:43 am
By JOHN DANISZEWSKI, Associated Press

NEW YORK (AP) — The crisis in Ukraine is hardly going away — a showdown of two world views that could upend Europe. It carries echoes of the Cold War and resurrects an idea left over from the 1945 Yalta Conference: that the West should respect a Russian sphere of influence in Central and Eastern Europe.

Since coming to power in 2000, Russian President Vladimir Putin has worked steadily and systematically to reverse what he views as the humiliating breakup of the Soviet Union 30 years ago.

While massing troops along Ukraine’s border and holding war games in Belarus, close to the borders of NATO members Poland and Lithuania, Putin is demanding that Ukraine be permanently barred from exercising its sovereign right to join the Western alliance, and that other NATO actions, such as stationing troops in former Soviet bloc countries, be curtailed.

NATO has said the demands are unacceptable and that joining the alliance is a right of any country and does not threaten Russia. Putin’s critics argue that what he really fears is not NATO, but the emergence of a democratic, prospering Ukraine that could offer an alternative to Putin’s increasingly autocratic rule that Russians might find appealing.

Russia’s present demands are based on Putin’s long sense of grievance and his rejection of Ukraine and Belarus as truly separate, sovereign countries, rather than as part of a much older Russian linguistic and Orthodox motherland that should be joined with, or at least friendly toward, Moscow.

In a millennium-spanning treatise last summer titled, “The Historical Unity of Russians and Ukrainians,” Putin tipped his hand. He insisted that the separation of Russia, Ukraine and Belarus into separate states today is artificial, due largely to political mistakes during the Soviet period and, in the case of Ukraine, driven by a malevolent “anti-Russia project” supported by Washington since 2014.

His Russo-centric view of the region poses a crucial test for U.S. President Joe Biden, who already is grappling with crises on multiple domestic fronts — the coronavirus pandemic, resurgence of inflation, a divided nation in which a large segment of the electorate refuses to acknowledge his presidency and a Congress that has blocked many of his social and climate goals.

Biden has ruled out military intervention to support Ukraine, and instead has employed intense diplomacy and rallied Western allies to support what he promises will be severe and painful sanctions against Russia if it dares to invade Ukraine. But depending on how the situation plays out, he has admitted he could have trouble keeping all the allies on board.

The Russian leader has already invaded Ukraine once, with little reaction. Russia took Crimea back from Ukraine in 2014 and has supported pro-Russian Ukrainian separatists fighting the Kyiv government in the Donbass region, a quiet war that has killed 14,000 people, more than 3,000 of them civilians.

Putin’s strategy has been to try to recreate the power and a defined sphere of influence that Russia lost with the fall of the Berlin Wall, at least in the area of the former Soviet Union. He has bristled at what he sees as Western encroachment into the countries of the former Warsaw Pact -- which had once formed a pro-Soviet buffer between the USSR and NATO.

Poland, Hungary and the Czech Republic were allowed to join NATO in 1999, followed in 2004 by Bulgaria, Estonia, Latvia, Lithuania, Romania and Slovakia.

Subjected to post-World War II Soviet domination, the countries were eager to join the Western defensive alliance and the Western free-market system to secure independence and prosperity after the fall of the Iron Curtain.

For similar reasons, both Ukraine and Georgia also want in, and have been recognized by NATO as aspiring members of the alliance. Ukrainian President Volodymyr Zelensky has asked Western leaders to take on Ukraine’s request for membership with greater urgency as a signal to Moscow that the West will defend Ukraine’s independence.

Russia contends that NATO expansion violates commitments made to it after the Berlin Wall’s collapse in exchange for Moscow’s acceptance of the reunification of Germany. U.S. officials deny any such promises were made.

Early in his presidency, Putin did not show adamant opposition to NATO. He suggested in a 2000 BBC interview that Russia might even be interested in joining; years later, he said he had raised that prospect with U.S. President Bill Clinton before Clinton left office in 2001.

Now, however, Putin sees the alliance as threatening Russia’s security.

But the newer NATO countries take the opposite view. They regard Russia, which boasts the region's largest military and a vast nuclear arsenal, as the real threat, which is why they rushed to join NATO — afraid that a strengthened Russia might someday try to reimpose its dominance.

A disputed election in Belarus led to months-long mass demonstrations against longtime Belarusian leader Alexander Lukashenko. Alienated from his own people and unrecognized as a legitimate president in the West, Lukashenko has been driven closer into Putin’s protective embrace.

Similarly, after civil unrest in Kazakhstan just weeks ago, Russia sent in troops to help that former Soviet republic’s president restore order as part of a peacekeeping mission of the Russia-led Collective Security Treaty Organization alliance. The troops have since departed the country.

Putin’s aim has been to reimpose ties with Russia's former Soviet neighbors, while challenging and dividing the West. Rather than leading Russia in a more democratic direction, he appears to now reject the very idea of liberal democracy as a sustainable model, seeing it rather as a conceit the West uses to pursue its own aims and humiliate its foes.

He came to power vowing to restore to Russia a sense of greatness. He seized back economic control from the oligarchs, crushed rebels in Chechnya, gradually strangled independent media and upped investment in the military. More recently, he has banned Russia’s few remaining human rights organizations.

Beyond Russia’s borders, his secret services have overseen the assassinations of critics and meddled in foreign elections, including offering clandestine support to the election of Donald Trump in 2016, the pro-Brexit campaign in Britain and various right-wing European parties that oppose European integration.

He told an interviewer in 2019 that “liberalism is obsolete,” implying that the dominant Western ideal of liberal democracy no longer has a place in the world. The idea that Ukrainians are independent and could be freely choosing their own alliances is to him a charade.

“All the subterfuges associated with the anti-Russia project are clear to us. And we will never allow our historical territories and people close to us living there to be used against Russia. And to those who will undertake such an attempt, I would like to say that this way they will destroy their own country,” he wrote in his essay last summer.

“I am confident that true sovereignty of Ukraine is possible only in partnership with Russia.”

The challenge for Biden, NATO and the European Union is whether their collective resolve and solidarity can protect Ukraine’s vision of itself as part of the West, and whether Putin’s Russian nationalist ambitions in the region will succeed or fail.

EDITOR's NOTE: John Daniszewski, an Associated Press vice president and editor-at-large, covered Eastern Europe, Ukraine and Russia during the breakup of the Soviet Union and the early years of Putin's presidency.

'A long journey': Volunteers from Belarus fight for Ukraine

WHO chief: The COVID pandemic is 'most certainly not over'