Associational missionary: It's easier to find pastors than pianists in rural Georgia 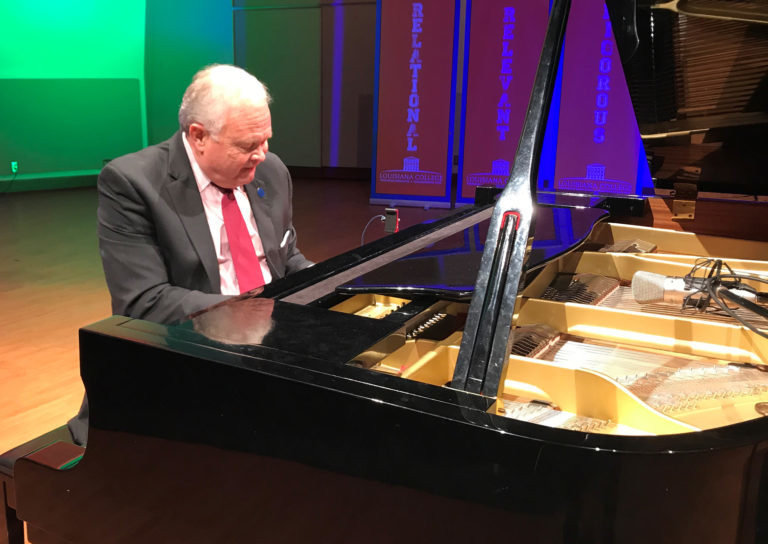 Rick Brewer, president of Louisiana Christian University, plays piano on stage at the school's Pineville campus in this 2021 photo. In rural America, churches are having trouble finding pianists. (Photo/Baptist Press)
Posted Tuesday, May 10, 2022 5:49 pm
By ROGER ALFORD, The Christian Index

“I’d say more than half of our churches are without pianists,” said Bill Gordon, the associational missions strategist in Ebenezer. “People simply aren’t taking piano lessons like they once did. It’s a lot easier to find a pastor right now than it is to find a pianist.”

Churches across rural America have been struggling to find pianists, due in part to shifting interests among children and their parents. In recent years, parents have been putting more emphasis on athletics than musical training.

Church leaders say cuts to music education programs in public schools also have had an impact on the number of musicians available to congregations. As financial resources shrink, school administrators tend to shift money from fine arts to the three R’s.

Nationally, rural communities appear to be hit hardest by musician shortages.  Churches in urban areas, with larger populations to draw from, are largely unaffected.

Gordon said musical soundtracks seem to be the best solution in the short term.

“Small churches have become accustomed to not having pianists at this point,” Gordon said. “They have turned to canned music. I was at one of the smaller churches the other day, and they had really great music. At first, I thought they had a pianist, even though I knew better.”

According to a Lifeway Christian Resources survey done last year, 79 percent of churches regularly use pianos in worship services while soundtracks are regularly used by 22 percent.

Lifeway points out that soundtracks give churches access to more than piano music. With the push of a button, they can have the music of a classical orchestra or even a bluegrass band if they so choose.

“There are musical options available to churches that have not been available before,” Gordon said. “The electronics today make that a lot easier than it was in the past.”