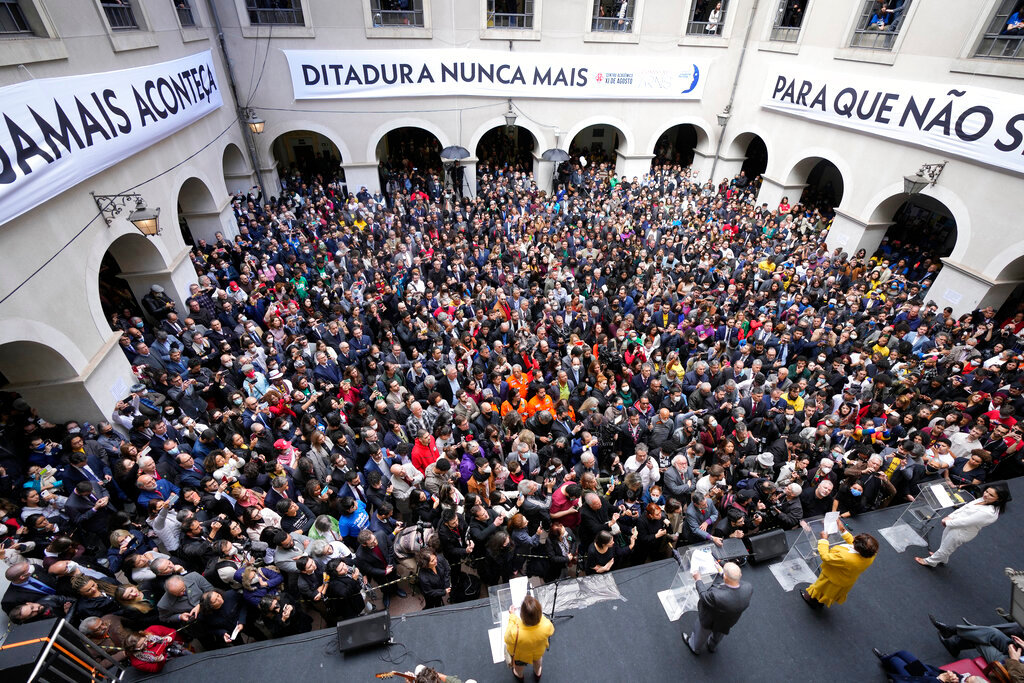 People attend the reading of one of two manifestos defending the nation's democratic institutions and electronic voting system outside the Faculty of Law at Sao Paulo University in Sao Paulo, Brazil, Thursday, Aug. 11, 2022. The sign reads in Portuguese "Never again a dictatorship." (AP Photo/Andre Penner) 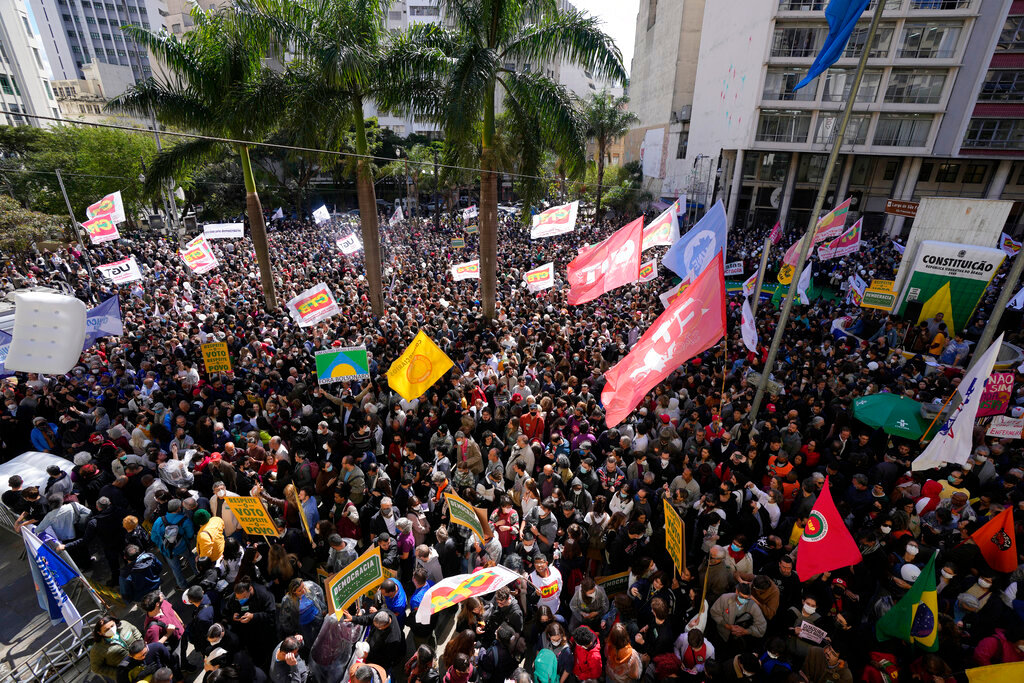 People gather for the reading of one of two manifestos defending the nation's democratic institutions and electronic voting system outside the Faculty of Law at Sao Paulo University in Sao Paulo, Brazil, Thursday, Aug. 11, 2022. (AP Photo/Andre Penner)
Previous Next
Posted Friday, August 12, 2022 9:39 am
By DIANE JEANTET, DÉBORA ÁLVARES and MAURICIO SAVARESE, Associated Press

SAO PAULO (AP) — Thousands of Brazilians flocked to a law school Thursday in defense of the nation’s democratic institutions, an event that carried echoes of a gathering nearly 45 years ago when citizens joined together at the same site to denounce a brutal military dictatorship.

In 1977, the masses poured into the University of Sao Paulo’s law school to listen to a reading of “A Letter to Brazilians,” a manifesto calling for a prompt return of the rule of law. On Thursday, they heard declarations defending democracy and the country’s elections systems, which President Jair Bolsonaro has repeatedly attacked ahead of his reelection bid.

While the current manifestos don’t specifically name Bolsonaro, they underscore the country’s widespread concern that he may reject election results not in his favor in an attempt to cling to power.

“We are at risk of a coup, so civil society must stand up and fight against that to guarantee democracy," José Carlos Dias, a former justice minister who helped write the 1977 letter and the two documents read Thursday, told The Associated Press.

In Sao Paulo, drivers stuck in traffic on one of the main roads to the law school applauded and honked as marching students chanted pro-democracy slogans. A huge inflatable electronic voting machine by the building’s main entrance bore the slogan “RESPECT THE VOTE”.

Inside, hundreds of guests gathered in the university’s Great Hall to hear speeches, while others stood outside watching on big flat screens.

The proclamations are contained in two letters. The first went online on July 26 and has been signed by nearly 1 million citizens, including ordinary people; popular musicians such as Caetano Veloso and Anitta; high-profile bankers and executives; and presidential candidates, among them former President Luiz Inácio Lula da Silva, who leads all polls ahead of the October election.

The second letter, published in newspapers last Friday, carries the endorsement of hundreds of companies in banking, oil, construction and transportation — sectors that traditionally have been averse to taking public political stances, said Carlos Melo, a political science professor at Insper University in Sao Paulo. They appear to have made an exception now, given the fear that any democratic backslide would be bad for business, he said.

“Democracy is important for the economy,” he said.

Bolsonaro's commitment to democracy has been scrutinized since he took office, in large part because the former army captain has insistently glorified the country’s two-decade dictatorship, which ended in 1985. Earlier this year he met with Hungary’s autocratic leader, Viktor Orban, and Russia’s Vladimir Putin.

The president only spoke about the event late Thursday, saying it was crafted to support da Silva's campaign. He also criticized the Workers' Party party for supporting leftist authoritarian regimes in Cuba and Venezuela.

For over a year, Bolsonaro has claimed Brazil's electronic voting machines are prone to fraud, though he never presented any evidence. At one point, he threatened that elections would be suspended if Congress didn't approve a bill to introduce printed receipts of votes. The bill didn't pass.

Bolsonaro also began expressing desire for greater involvement of the armed forces in election oversight. Last week, army officials visited the electoral authority’s headquarters to inspect the voting machines’ source codes. Bolsonaro has alleged that some of the authority's top officials are working against him.

At the law school on Thursday, Carlos Silveira carried a sign that read: “The military doesn’t count votes.”

“We are here because it is riskier not to do anything," said Silveira, 43. "Bolsonaro has suggested a big anti-democratic act before the election, and the military has remained on his side, it seems. We want to show them we are the majority, and that our quest for democracy will win.”

When Bolsonaro launched his campaign, he called on supporters to flood the streets for Sept. 7 independence day celebrations. On that date last year, he declared before tens of thousands who rallied at his behest that only God can remove him from power. That same day, he declared he would no longer heed rulings from a Supreme Court justice, threatening to plunge the country into an institutional crisis. He later backtracked, saying his comment was made in the heat of the moment.

Bolsonaro's rhetoric resonates with his base, but is increasingly alienating him politically, Melo said.

Since last year, the electoral authority has been proactive in countering claims against the voting system. Its top officials, who are also Supreme Court justices, have made repeated statements in its defense. Behind the scenes, they have been working overtime to recruit allies in the legislature and private sector, though many had been loath to echo their public pronouncements.

A turning point came last month, after Bolsonaro called foreign ambassadors to the presidential residence to lecture them on the electronic vote's supposed vulnerabilities. Since then, both leaders of Congress and the prosecutor-general, all of whom are considered Bolsonaro allies, have expressed confidence in the system's reliability.

The U.S. also weighed in, with its State Department issuing a statement the day after the ambassadors' meeting to say the Brazilian electoral system and democratic institutions are a “model for the world.” In a July conference with regional defense ministers in Brazil's capital, Brasilia, U.S. Defense Secretary Lloyd Austin said militaries should carry out their missions responsibly, especially during elections.

The letters — which at any other time might have been a dry exercise relegated to academia — have struck a chord with society. Television stations in recent days have aired clips of artists reading the pro-democracy pledge, and rallies are being called in 22 cities nationwide.

One of those invited to speak at the university law school was Arminio Fraga, a prominent asset manager and former central bank chief during a previous, center-right administration.

“I am here today ... with such a diverse group that sometimes fought on opposite sides, doing all we can now to preserve what is sacred to us all. That’s our democracy,” said Fraga, an outspoken Bolsonaro critic.

Bolsonaro, for his part, has played down concerns, deriding the manifestos as “little letters" and insisting that he respects the Constitution. On Thursday, in a public swipe at the law school rally on Twitter, he remarked: “Today, a very important act took place ... Petrobras reduced, once again, the price of diesel."

On Twitter, he added Thursday night: “Brazil already has its letter for democracy; the constitution. That is the only letter that matters to assure the democratic rule of law, but it was precisely the one that was attacked by those who promote a parallel text that, for legal effects, is worth less than toilet paper.”

Still, concern about Bolsonaro's fiery rhetoric has spread even among some allies and has undermined their efforts to keep the peace between the administration and other institutions, two Cabinet ministers told The Associated Press. They spoke on condition of anonymity, as they weren't authorized to discuss the matter publicly.

Bolsonaro's party has distanced itself from claims that the election could be compromised. The party's leader sought out the electoral court's president to assure him of his trust in the voting system, Augusto Rosa, the party's vice president, told the AP.

In any case, the election will be an uphill battle for Bolsonaro. More than half the people surveyed by pollster Datafolha said they wouldn't vote for him under any circumstance, though support has perked up recently amid lower unemployment, reduced gasoline prices and higher welfare spending. Analysts said they expected da Silva’s lead to fall as the election nears, given that incumbents tend to benefit from the state machine. A close race would make preelection promises to respect results all the more relevant.