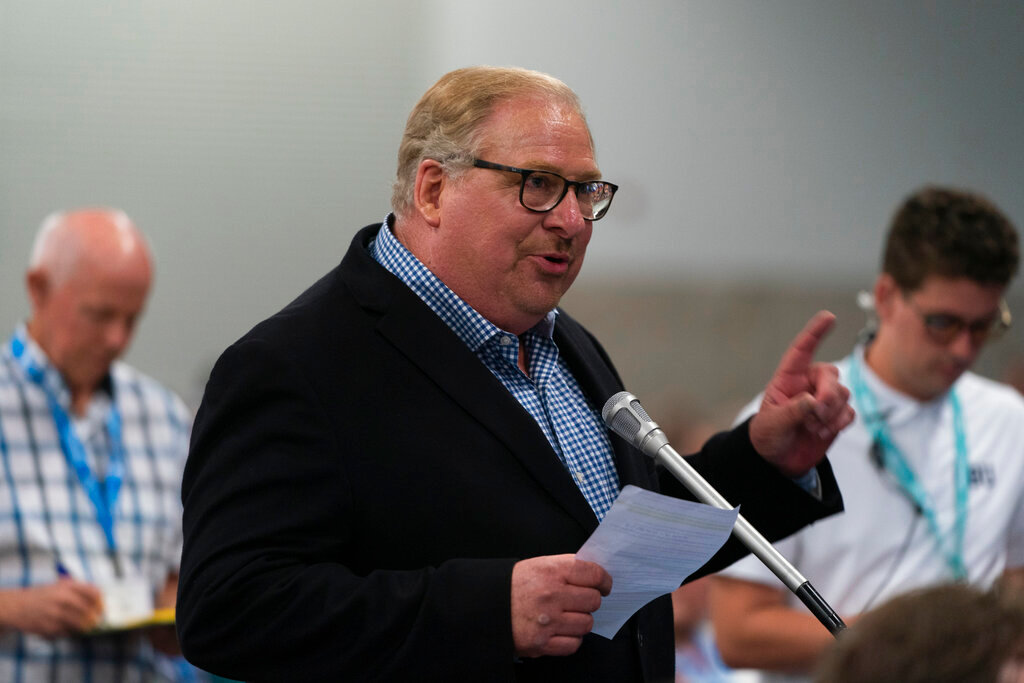 ANAHEIM, Calif. – A proposal to kick a California megachurch out of the Southern Baptist Convention for ordaining women pastors stirred debate among messengers at an annual meeting in Anaheim but ultimately fizzled.

The Baptist Faith and Message says, “the office of pastor is limited to men as qualified by Scripture.”

Saddleback ordained three women pastors in 2021 and announced recently that the retiring Warren would be replaced as lead pastor later this year by Andy Wood. Wood’s wife, Stacie, would become teaching pastor.

The SBC Credentials Committee is reviewing the Saddleback issue, delaying a formal recommendation “until clarity is provided regarding the use of the title ‘pastor’ for staff positions with different responsibility and authority than that of the lead pastor.”

Linda Cooper, chairwoman of the Credentials Committee and member of Forest Park Baptist Church in Bowling Green, Ky., acknowledged that “a majority of SBC churches hold the belief that the office of lead pastor, elder, bishop or overseer is limited to men as qualified by Scripture.”

Saddleback has grown from a church plant with a handful of families in 1980 to than 24,000 people per week across multiple campuses.

In his remarks at the annual meeting, Warren said, “It’s customary for a guy who is about to be hung to say his dying words," sending the crowd into guffaws.

Warren insisted he was not at the meeting to mount a defense but to point out that the “gift of pastoring is different from the office of pastoring.”

Warren told messengers he is thankful to the SBC for investing in him as a young minister and preparing him to start Saddleback, which now has ministries reaching across Southern California and beyond.

“Southern Baptists taught me how to honor and love the local church," he said. “I owe you all so much.”
___

The Associated Press contributed to this report.

Almora's bases-loaded walk-off single lifts Reds over Braves
CINCINNATI (AP) — Albert Almora Jr. slapped a bases-loaded single past a drawn-in infield in the ninth to give the Cincinnati Reds a 4-3 win over the Atlanta Braves on Sunday. “I …

31 bodies, some decomposing, found at Indiana funeral home
JEFFERSONVILLE, Ind. (AP) — Police are investigating after more than 30 bodies, some decomposing, were found inside a southern Indiana funeral home. Police in the Louisville suburb of Jeffersonville responded to Lankford Funeral Home and Family Center on Friday evening and found 31 bodies, including some "in the advanced stages of decomposition,” Maj. Isaac Parker said.

Alpine glacier chunk detaches, killing at least 6 hikers
ROME (AP) — A large chunk of an Alpine glacier broke loose Sunday and roared down a mountain in Italy, sending ice, snow and rock slamming into hikers on a popular trail on the peak and killing at least six and injuring nine, authorities said, warning that the toll might climb.

Bone cancer, brain hemorrhage not stopping 'God's man' Tony Dickerson
COLUMBUS, Ga. – Tony Dickerson makes his way into the pulpit, his voice unmistakable in its rhythm and intensity. “I want to tell you friends, God is in this place,” he declares with a boldness that fills the auditorium at Pinehurst Baptist Church. “And don’t you for one minute doubt it. He is here, and we are going to have a meeting with Him.” People settle into their seats, eager to be taken on an adventure through the Bible by the pastor who has been serving the same Columbus church for the past 50 years, an almost unheard of tenure.

WWII Medal of Honor recipient to lie in state at US Capitol
CHARLESTON, W.Va. (AP) — Hershel W. “Woody” Williams, the last remaining Medal of Honor recipient from World War II, will lie in state at the U.S. Capitol, U.S. Sen. Joe Manchin announced at a memorial on Sunday where Williams was remembered for his courage, humility and selflessness.
© Copyright 2022 The Christian Index | Copyright/Terms of Use
Powered by Creative Circle Media Solutions