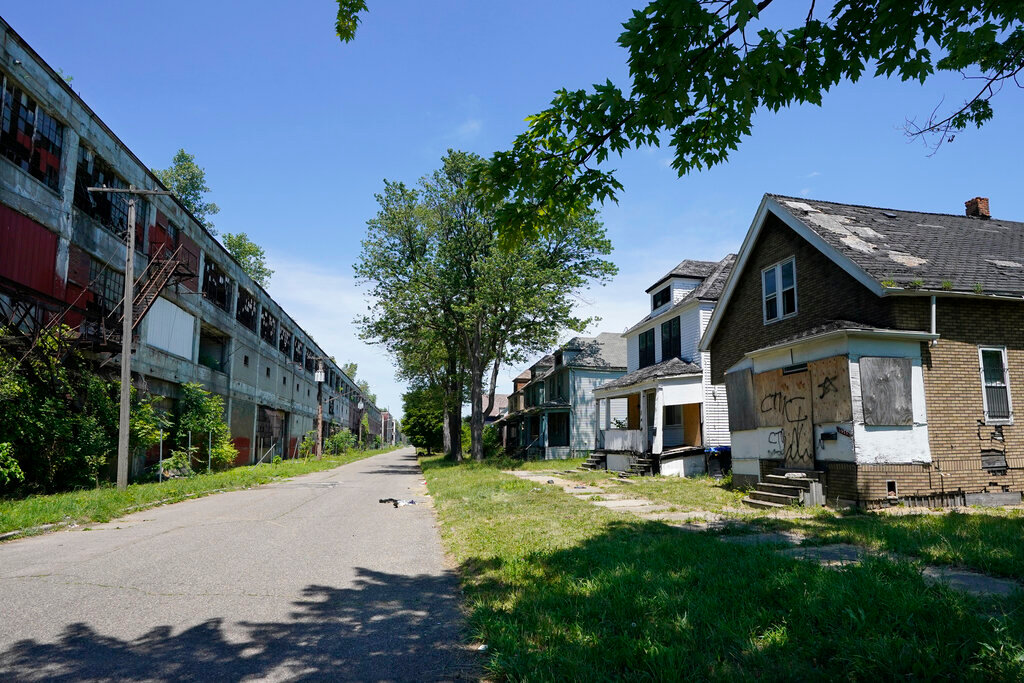 The Packard Plant, left, sits across the street from boarded-up houses on Detroit's east side, June 30, 2022. (AP Photo/Carlos Osorio) 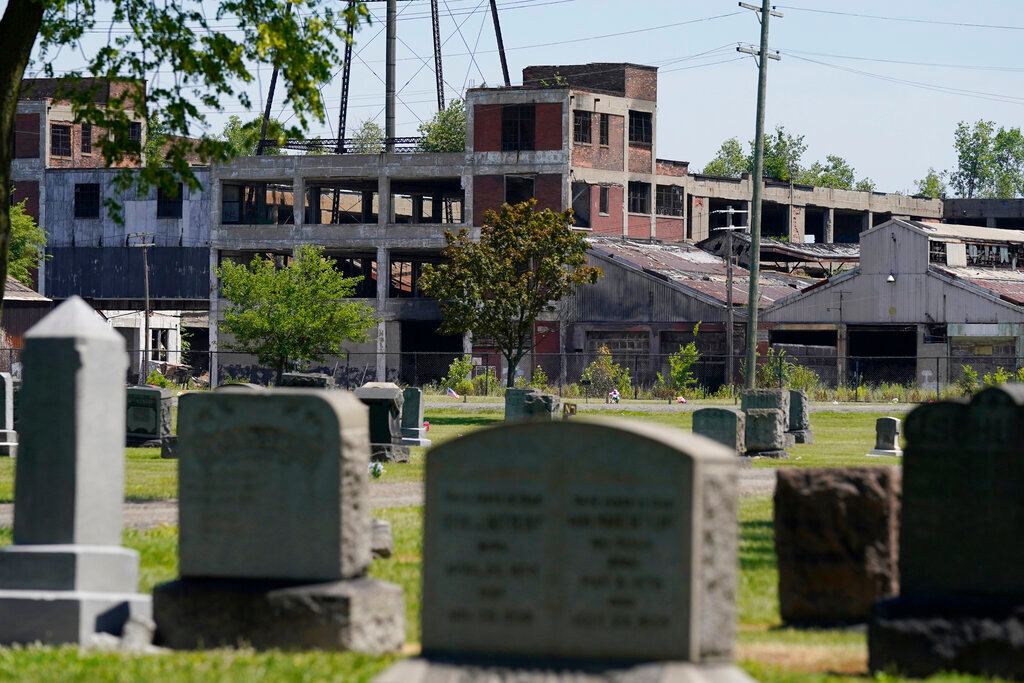 The Packard Plant is seen behind the Trinity Cemetery on Detroit's east side, June 30, 2022. (AP Photo/Carlos Osorio) 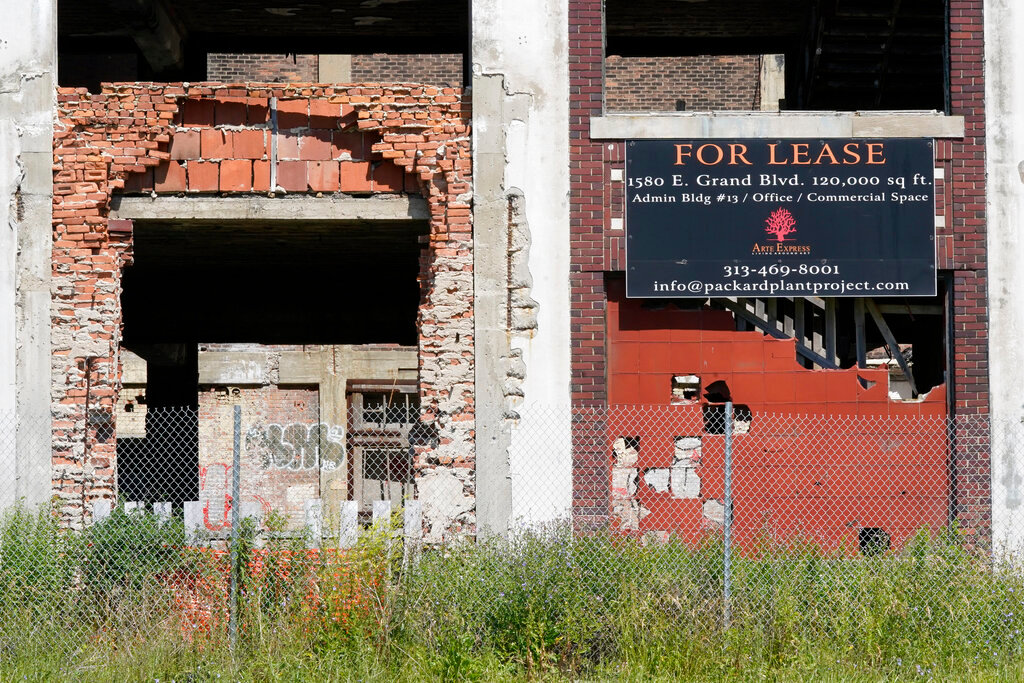 DETROIT (AP) — One of the first things 84-year-old Mahalie Wilson sees when she steps out of her home on Detroit's east side is the brick, steel and concrete skeleton of the long-vacant Packard plant that looms over the neighborhood.

Built in the early 1900s and still churning out high-end cars into the 1950s, the massive complex that was once one of the city's industrial jewels is now one of the nation's foremost examples of urban blight — an inescapable reminder of Detroit's better days.

“I deal with it,” Wilson, who's lived within shouting distance of the plant since 1969, said recently from behind her front security screen door. “I’ve got used to it. I don’t pay it any attention.”

Detroit has aggressively taken on its blight problem since emerging from the largest municipal bankruptcy in U.S. history eight years ago, and has razed more than 20,000 abandoned houses in that time. That work is ongoing, but it has been largely covered by federal funding and the city still must figure out how to pay for the much more expensive demolition or find developers to repurpose scores of abandoned or aging apartment buildings, factories and other massive eyesores.

The problem is hardly unique to Detroit — Baltimore, Milwaukee and Dayton, Ohio, are among the many cities looking to rid themselves of old structures.

Like the Packard plant, many factories in Detroit were located close to workers' homes. As the buildings faded and became blighted, so did Wilson's neighborhood and others across the city.

If Mayor Mike Duggan has his way, parts of the 3.5 million-square-foot, 40-acre Packard plant complex will be demolished by year’s end. Other portions will be redeveloped. It’s among 100 large structures the city has identified to be torn down or renovated.

“This is emblematic of the industrial challenges we have,” said Antoine Bryant, Detroit's planning and development director. The easiest solution would be to demolish, he said, but "how can we add to the city instead of just taking away?"

Bryant pointed to a $134 million plan to redevelop the six-story former Fisher Body 21 auto plant into more than 400 apartments and retail space.

Jason Hackworth, a professor in the University of Toronto’s Geography and Planning Department, is skeptical of any plans to preserve what’s left of the Packard plant and believes Fisher Body 21′s fate will be the wrecking ball.

“The Packard probably should have been demolished decades ago," he said.

“I don’t know of another city that has as prominent of abandoned industrial and commercial facilities as Detroit. ... Certainly nothing I know of that’s the size of the Packard plant in any other city,” Hackworth added. “Developers don’t have the money to develop or demolish it.”

In 2013, Peruvian developer Fernando Palazuelo bought the property for $405,000 at a tax foreclosure auction. His plans to restore and reopen it with apartments and shops never materialized. The plant's future now is in the city's hands.

Palazuelo “has done virtually nothing with it since he bought it out of foreclosure in 2013, other than amass more than a million dollars worth of unpaid drainage bills, property taxes and blight tickets,” said Chuck Raimi, the city's acting corporation counsel.

“The city fully intends to rid the community of this massive blighted complex once and for all,” Raimi continued. "For it’s part, the city already has demolished more than 100,000 square feet of the portions of the plant it owns and will be demolishing the remaining portions it doesn’t plan to save for redevelopment later this year.”

The Associated Press was unable to reach Palazuelo for comment.

Still, the Packard plant isn't Detroit's most well-known ruin. That title once belonged to the nearly 20-story Michigan Central train station in the city's Corktown neighborhood. Ford Motor Co. bought the building several years ago and is converting it and properties around the station into a future hub for mobility and innovation.

Dayton plans to demolish a 129-year-old building that for a short time was the Wright brothers’ first bike shop.

“It is a dangerous building and the front façade is beginning to separate from the building and poses a hazard to pedestrians and motor vehicles,” said Todd Kinskey, director of Dayton’s Planning, Neighborhoods & Development department. “Several engineering studies recommend demolition and no developer has been willing to pursue redevelopment.”

In 2016, Maryland and Baltimore officials announced a more than $93 million plan to tear down blighted structures and rehabilitate others.

Yard 56, which features shops, office space and lofts, has been developed on the site of a porcelain and ceramics plant that was built in 1911 and abandoned in 2006.

“It was in an economically depressed area ... and vacant for many years,” said Colin Tarbert, president and chief executive of the Baltimore Development Corp. “Trees were growing out of it. Now it’s reopened and with a number of new companies, plus non-profits and a construction training center housed there.”

Crystal Glass, opened her social club in 2009 in the shadow of Detroit's Packard plant. She's not sure if redeveloping or razing it will help her business.

“I'd just like to see something, anything besides that,” Glass said.