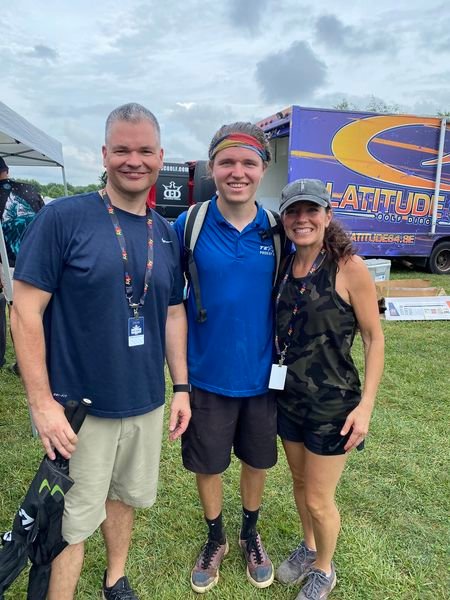 Alden Harris poses with his parents, Jerry and Andrea Harris, while on the disc golf tour. 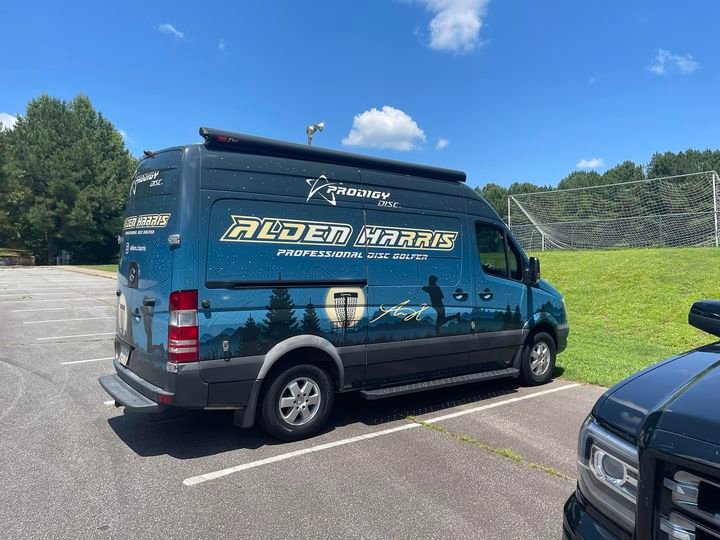 Prodigy Disc Golf personalized Alden Harris’ van for him to travel to events. 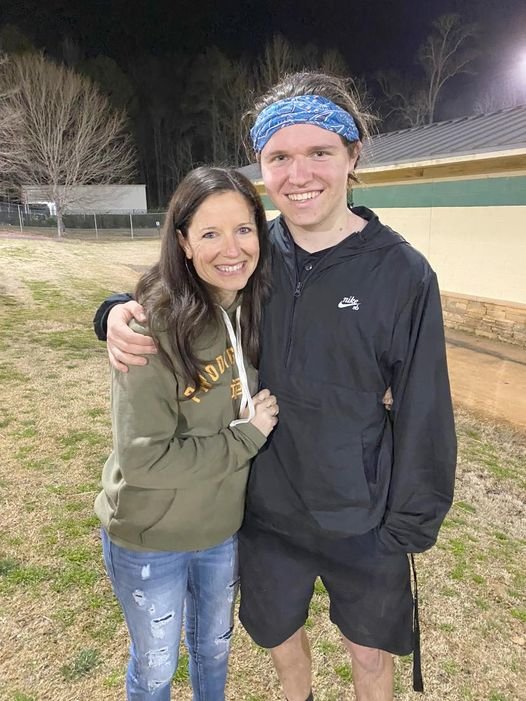 Alden Harris poses for a photo with his mother, Andrea, after one of his disc golf tournaments. 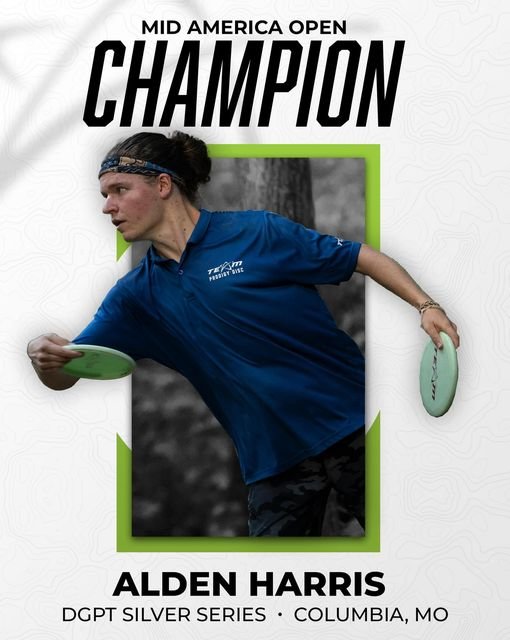 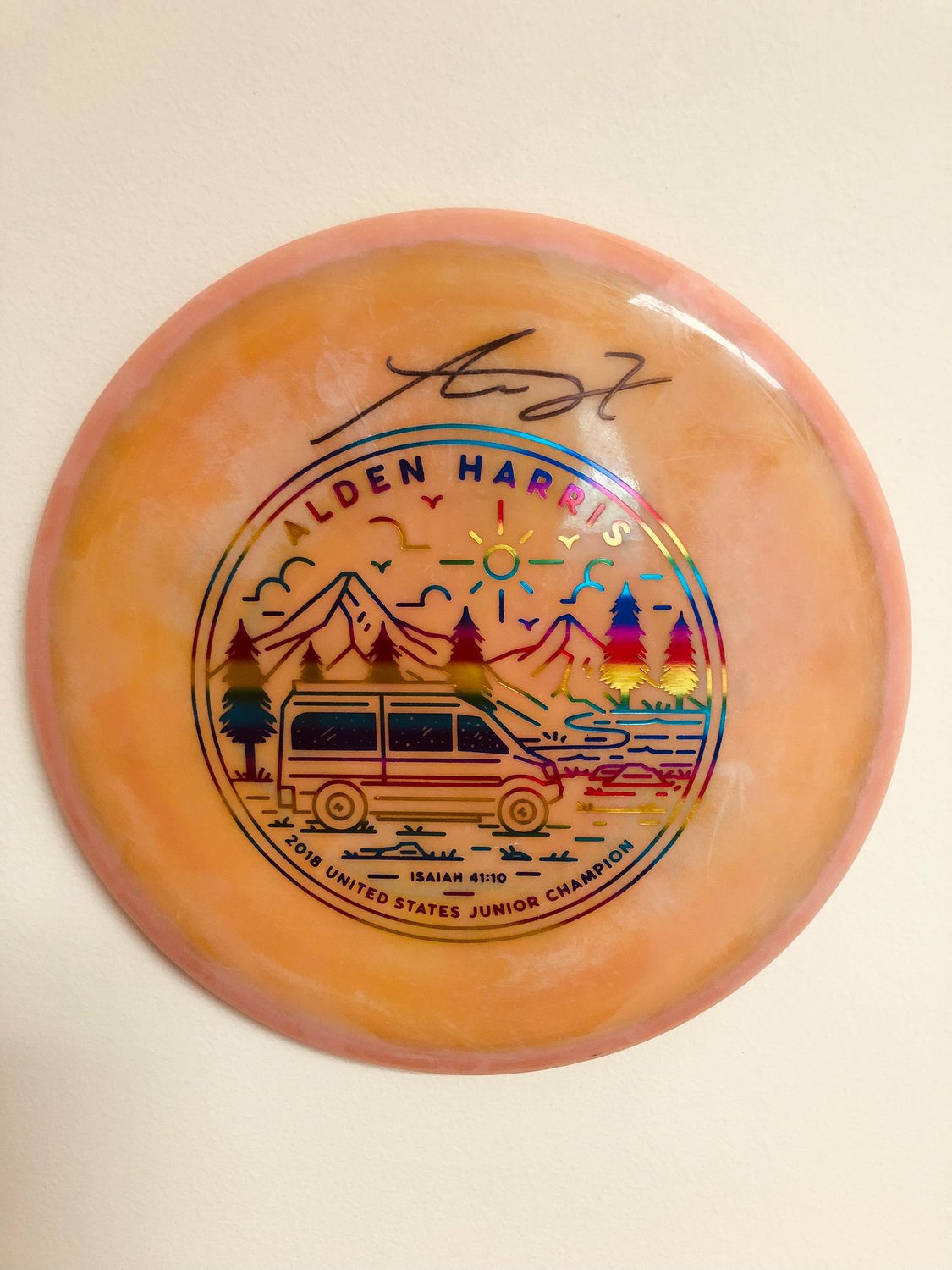 Harris, 21, a member of First Baptist Church Woodstock, Ga., is a rising star in the world of disc golf and on the first weekend of August won the prestigious Mid America Disc Golf Open Silver Series at the Harmony Bends Disc Golf Course in Columbia, Mo.

Disc golf is a sport that is growing in popularity at an incredible pace. In fact, the number of people embracing this sporting activity is growing exponentially all over the world. According to UDisc, a very popular disc golf scoring app, it is one of the fastest growing sports in modern times, with a 33 percent increase in games played from 2019 to 2020 alone.

Disc golf has been referred to as regular golf’s “younger laidback cousin.” If you have gone for a walk in a public park recently, you may have seen golf baskets strategically scattered about; and you may have seen people attempting to throw frisbee-like discs into the baskets. However, disc golf professionals work tirelessly to hone their skills in the sport and can make some incredible shots as they fling their discs hundreds of feet through very narrow corridors lined with trees and bushes. Sometimes these golfers must be contortionists in order to position themselves to try to make a putt into the basket from behind massive trees or low-hanging limbs.

Harris, who is about to start his senior year of online studies in Sports Management at Liberty University, is currently under contract with Prodigy Disc Golf. He has had ten career wins authorized by the Professional Disc Golf Association, including victories in the Music City Open in Nashville, Tenn., and The Challenge at Goat Hill Park in Oceanside, Calif.

Harris drives up to 40,000 miles a year crisscrossing the nation in a specialized, personalized van. He generally tries to arrive at each disc golfing venue early enough to get in two or three practice rounds before the tournament begins.

In commenting on his 26-under-par victory at the Mid America Open, Harris explained, “It was a great battle this weekend. It was extremely gratifying because of all the hard work I have invested in my sport. It was also a blessing because I wanted to win for my family and all my friends who have supported me. It was the biggest win of my career so far.”

Harris continued, “God puts people in so many different places and he put me in the pro disc golf community. I’m so thankful God has put me in this position, because it has given me the amazing opportunity to make His name known among this close-knit community that will profit greatly from learning more about Jesus.”

Jeremy Morton, pastor of First Baptist Church of Woodstock, stated, “I am so proud of Alden’s success. To be so gifted in this sport at such a young age is quite impressive. But even more so, I am thrilled that Alden has been quite vocal about his faith in Christ amongst the disc golf community. His success has opened the door for him to share his testimony and God is using him.

“This is no surprise to anyone who knows Alden’s family. He was raised by two of the best church members we have at First Baptist Woodstock. His parents, Jerry and Andrea Harris have truly raised him to love and trust Christ."

Dustin Leatherman, who has a Christian ministry to the disc golf community called Eagles Wings, made the following comment about Harris, “Alden is an incredible competitor whose humble nature, and success on the course, has earned him the respect and admiration of not only his teammates, but his fellow competitors in the sport. Alden has used that platform to boldly share his faith in both his actions and words as an ambassador for Christ. While he is a man of few words, he uses his platform in a powerful way!”

Your platform may not be in the disc golf world, but as the old hymn suggests, “brighten the corner where you are.”

Gerald Harris is a former editor of The Christian Index and a proud grandfather to Alden Harris.