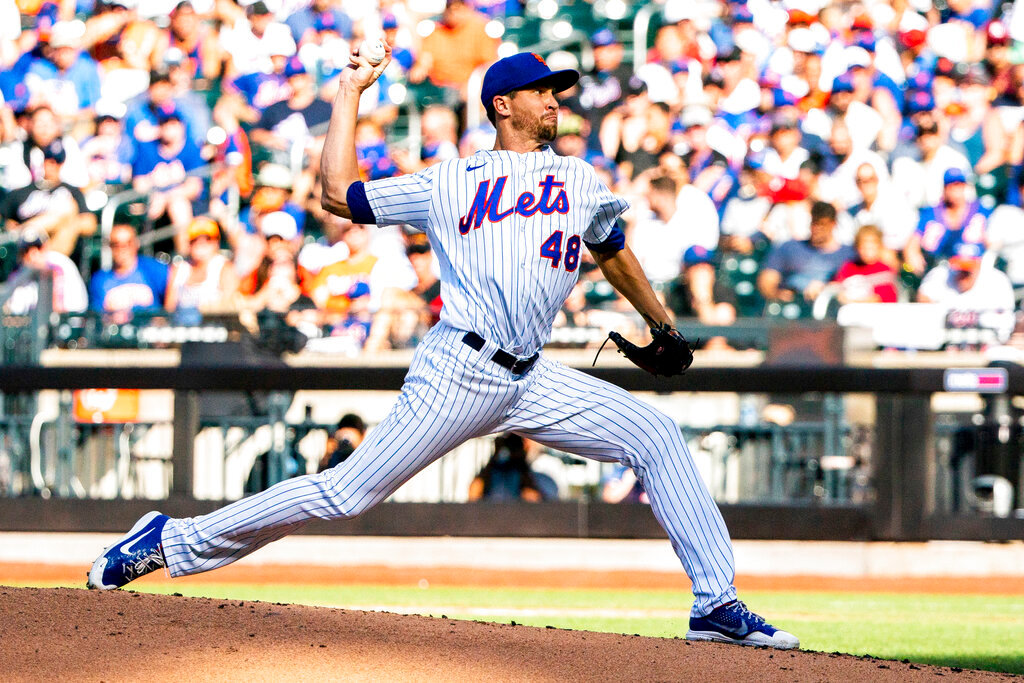 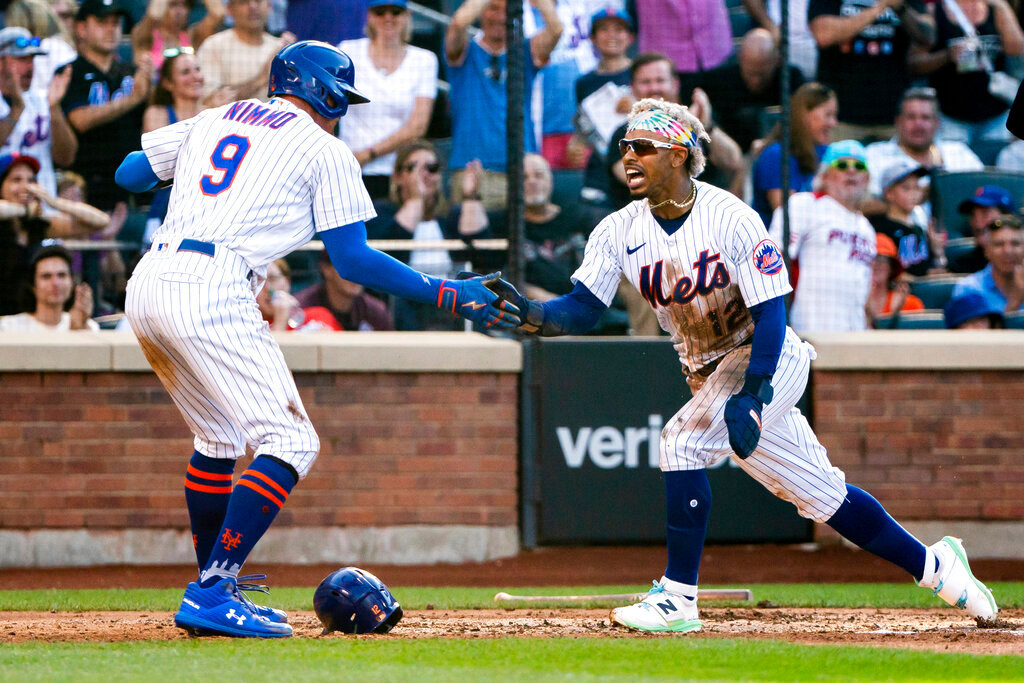 NEW YORK (AP) — Jacob deGrom struck out 12 and carried a perfect game into the sixth inning of his second start all season, pitching the New York Mets past the Atlanta Braves 5-2 on Sunday for their 12th victory in 14 games.

Pete Alonso drove in two runs and the first-place Mets finished with 19 strikeouts — including three in a row from closer Edwin Díaz to end it. They took four of five from Atlanta in their NL East showdown, extending their division lead to 6 1/2 games over the defending World Series champions.

Pitching at home for the first time in 13 months, a dominant deGrom (1-0) retired his first 17 batters — 12 on strikeouts — before walking No. 9 batter Ehire Adrianza with two outs in the sixth.

Dansby Swanson followed with a two-run homer on the 76th and final pitch from deGrom, making it 5-2.

The two-time Cy Young Award winner missed the final three months last season with right forearm tightness and a sprained elbow, then was shut down late in spring training because of a stress reaction in his right scapula. He finally returned Tuesday at Washington, throwing five innings of one-run ball in a rare Mets loss lately.

New York fans had to wait a little longer than they planned to see deGrom go to work as the start of the game was delayed 20 minutes by rain. Once play began, however, deGrom didn’t disappoint the Citi Field crowd.

A standing ovation greeted the 34-year-old ace before he stepped onto the mound and his first pitch was a 99 mph fastball that Swanson lofted into right field for the first out. The right-hander then struck out Matt Olson on four pitches, each of which was 100 mph or faster.

Making his 200th major league start, deGrom finished with the most strikeouts by a Mets pitcher this season. With shadows creeping over the infield during a late-afternoon start, Atlanta swung and missed at each of his first 18 sliders.

While deGrom was silencing the Atlanta bats, the Mets scored four times against rookie Spencer Strider (6-4) in the third.

Brandon Nimmo led off with an infield single and moved to third on Francisco Lindor’s single to center. Alonso delivered the big blow of the inning with a double off the third-base bag. Daniel Vogelbach walked and both burly sluggers chugged home on Mark Canha’s double into the left-center gap.

Strider needed 79 pitches to complete 2 2/3 innings in the shortest start of his career. The Mets added another run in the fifth when Jeff McNeil scampered home on a wild pitch.

Joely Rodríguez allowed one hit and struck out four over 2 1/3 scoreless innings in relief of deGrom. Díaz fanned all three batters in the ninth for his 26th save.

For the second straight game, Mets fans taunted the Braves in the ninth inning by performing the tomahawk chop.

Elder shuts out Nationals 8-0; Braves within 1 game of Mets

Adam Greenway not going to IMB
NASHVILLE (BP) — In a post on Twitter Wednesday morning, former Southwestern Baptist Theological Seminary President Adam W. Greenway announced that he would not be moving to a new position with the International Mission Board.

Journalist remembered for large impact in Baptist life
JEFFERSON CITY, Mo. (BP) – Missouri Baptists are mourning the loss – and celebrating the life – of Don Hinkle, 68, founding editor of The Pathway. Many have expressed their condolences in comments to a Sept. 22 post on The Pathway’s Facebook page sharing the news of Hinkle’s death.

CenturyMen disbanding after 53 years of choral Gospel ministry
LOUDON, Tenn. (BP) – John Condra recalls the first rehearsal of The CenturyMen, a 100-member male chorus organized in 1969 in the days of the Southern Baptist Radio and Television Commission. “When we got through singing,” said Condra, who was then music minister at First Baptist Church of Montgomery, Ala., “normally you talk or something. Nobody said a word. We just kind of looked at each other and said, ‘Where in the world did that sound come from?’

State university system awards record number of degrees
ATLANTA – The University System of Georgia awarded an all-time high 74,446 degrees during the last fiscal year, up 2.1% over fiscal 2021. “By preparing students for good jobs and helping create the jobs of the future, Georgia’s public colleges and universities are a great value for students and a major contributor to our state’s economy,” system Chancellor Sonny Perdue said Tuesday.
Georgia high school seniors continue besting the nation on SAT
ATLANTA – For the fifth year in a row, Georgia public school students outperformed their peers across the country on the SAT. Georgia’s class of 2022 recorded a mean score of 1052, 24 points higher than the 1028 national score but lower compared to the previous year, when Georgia students posted a mean score of 1077.
© Copyright 2022 The Christian Index | Copyright/Terms of Use
Powered by Creative Circle Media Solutions