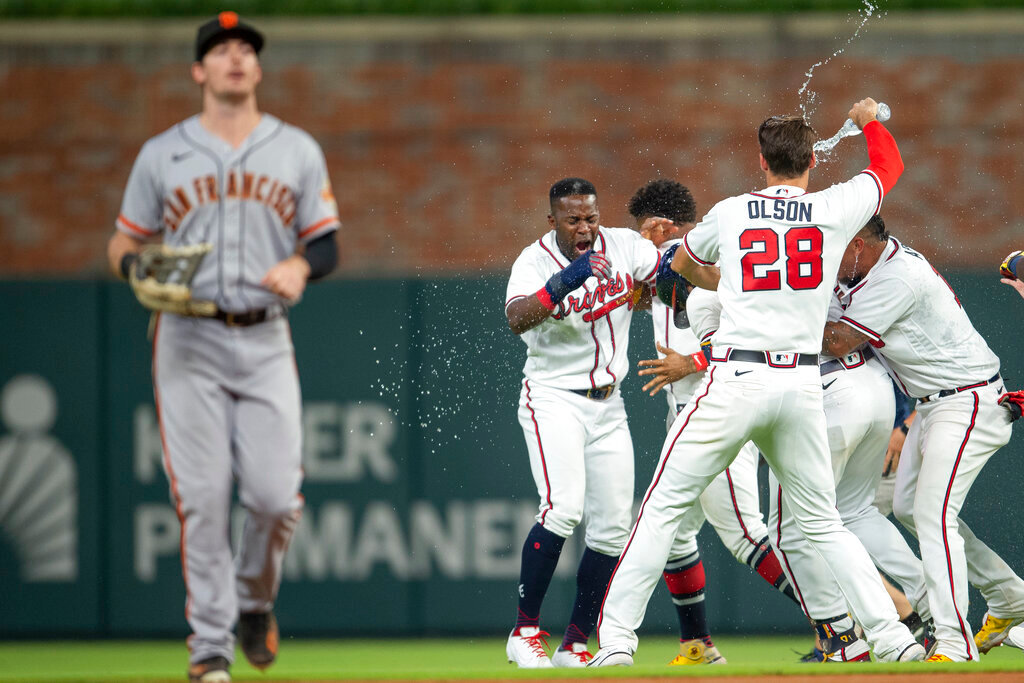 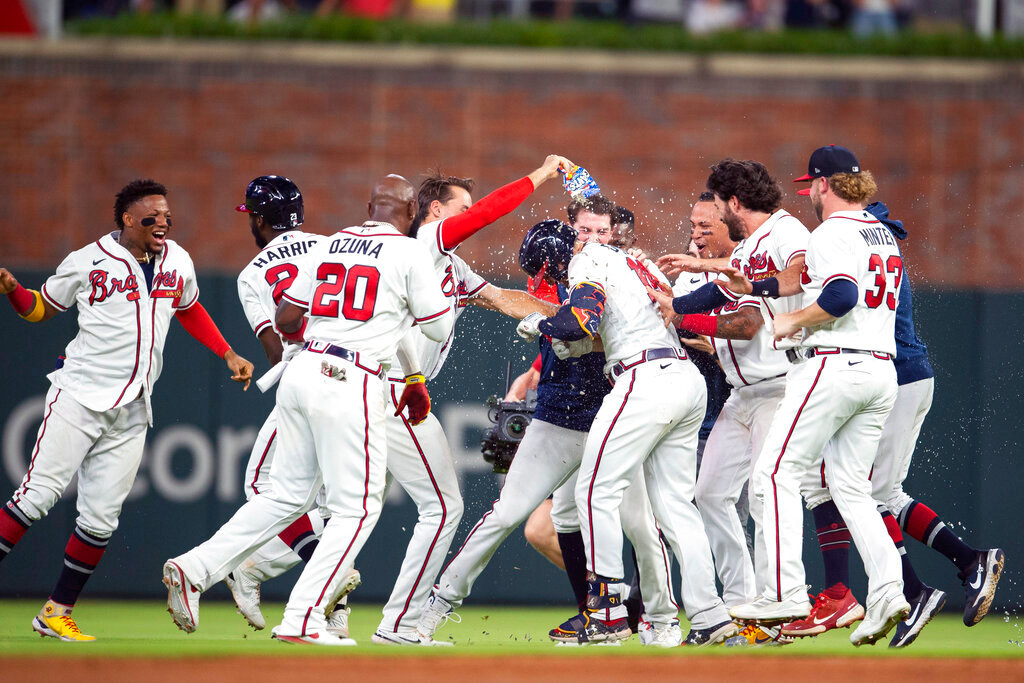 ATLANTA (AP) — Adam Duvall was targeted by his Atlanta teammates for the obligatory postgame dousing with a cooler full of sports drink following his game-winning hit.

Duvall said credit was also due to the Braves player who actually scored the winning run.

Duvall's run-scoring single capped Atlanta's three-run rally in the ninth as the Braves beat the San Francisco Giants 4-3 on Wednesday night. It was Atlanta's second walk-off win of the series.

Duvall's single up the middle off Tyler Rogers drove in William Contreras, who was on second base following his tying hit and crucial stolen base. Contreras slid across home plate with the winning run as Austin Slater's throw from center field was slightly up the third-base line.

“It's obviously easier to score from second,” Duvall said. “Having a runner in scoring position was huge in that moment. With that hit, he doesn't score from first.”

It was a timely steal for Contreras, the rookie catcher better known for his power bat that has earned him a share of the playing time with Travis d'Arnaud.

The Giants wasted another strong start by Carlos Rodón, who allowed only three hits and one run in seven innings.

Jake McGee (1-2) blew a 3-1 lead, built on homers by Mike Yastrzemski and Darin Ruf, by allowing three runs in the ninth. McGee was brought in to close out the lead because Camilo Doval had pitched back-to-back games.

Dansby Swanson led off the ninth with a homer off McGee to cut San Francisco's lead to one run. Marcell Ozuna followed with a single to right field and moved to second on Matt Olson's fly ball to deep center field.

Contreras added a single to left field to drive in Ozuna for a 3-3 tie. Right-hander Tyler Rogers struck out Orlando Arcia as Contreras stole second base. The steal proved to be crucial when Duval followed with the game-ending single.

“It turned out to be one of the bigger plays of the game,” Braves manager Brian Snitker said of the steal.

Rodón was dominant in his first career appearance against Atlanta, allowing one run with 10 strikeouts and one walk.

“Charlie is starting to get in his groove,” Snitker said.

Rodón's bid for his third consecutive start without allowing a run ended in the seventh. He has allowed only a combined seven hits and one run over 21 innings while winning three consecutive starts.

The 29-year-old Rodón gave up a second-inning walk to Contreras, but allowed no other baserunners before Arcia's bloop single to center field with one out in the fifth gave the Braves their first hit.

Tommy La Stella's run-scoring single off A.J. Minter (3-1) in the ninth drove in Ruf to add to the Giants' lead.

Braves have moment of silence in memory of announcer Motter