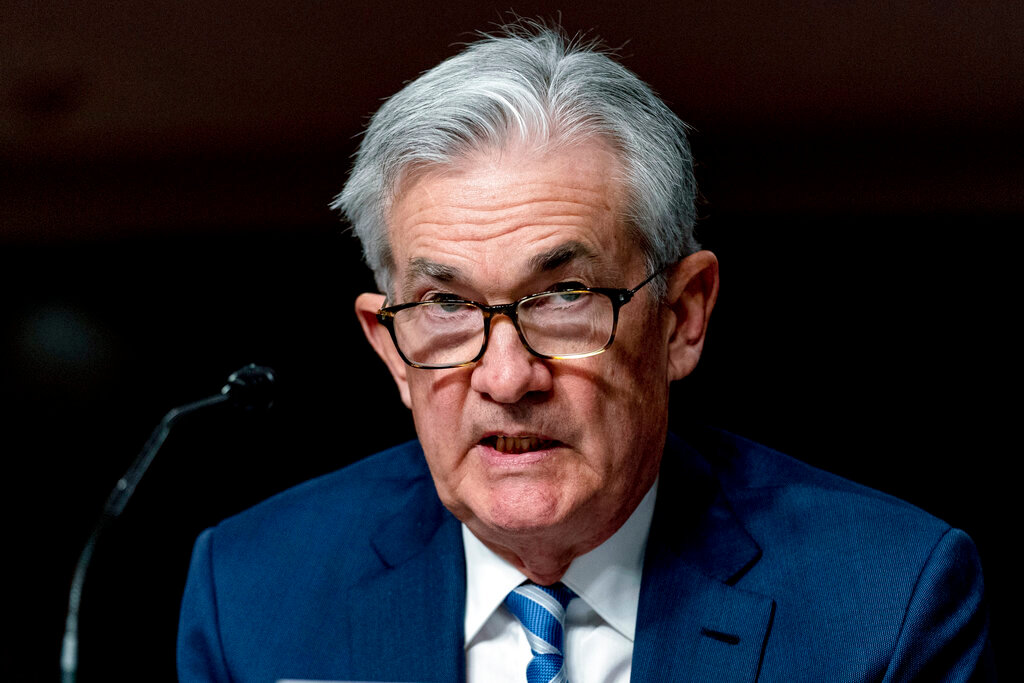 WASHINGTON (AP) — Warning that high inflation could make it harder to restore the job market to full health, Federal Reserve Chair Jerome Powell said Tuesday that the Fed will raise interest rates faster than it now plans if needed to stem surging prices.

With America's households squeezed by higher costs for food, gas, rent, autos and many other items, the Fed is under pressure to rein in inflation by raising rates to slow borrowing and spending. At the same time, the economy has recovered enough that the Fed's ultra-low-interest rate policies are no longer needed.

“If we have to raise interest rates more over time, we will,” Powell said during a hearing of the Senate Banking Committee, which is considering his nomination for a second four-year term.

The stark challenge for Powell if he is confirmed for a new term, as expected, was underscored by the questions he faced Tuesday from both Democratic and Republican senators. They pressed him to raise rates to reduce inflation, though without ramping up borrowing costs so much that the economy tumbles into a recession.

Fed officials have forecast three increases in their benchmark short-term rate this year, though some economists say they envision as many as four hikes in 2022.

Powell’s nomination is expected to be approved by the committee sometime in the coming weeks and then confirmed by the full Senate with bipartisan support. At Tuesday's hearing, he drew mostly supportive comments from senators from both parties. A Republican first elevated to the chair by President Donald Trump, Powell has also been credited by many Democrats for sticking with ultra-low-rate policies to support rapid hiring for the past 18 months.

In his testimony, Powell rebuffed suggestions from some Democratic senators that rate increases would weaken hiring and potentially leave many people, particularly lower-income and Black Americans, without jobs. Fed rate increases usually boost borrowing costs on many consumer and business loans and have the effect of slowing the economy.

But Powell argued that rising inflation, if it persists, also poses a threat the Fed's goal of getting nearly everyone wants a job back to work. Low-income families have been particularly hurt by the surge in inflation, which has wiped out the pay increases that many have received.

“High inflation is a severe threat to the achievement of maximum employment," he said.

The economy, the Fed chair added, must grow for an extended period to put as many Americans back to work as possible. Controlling inflation before it becomes entrenched is necessary to keep the economy expanding, he said. If prices keep rising, the Fed could be forced to slam on the brakes much harder by sharply raising interest rates, threatening hiring and growth.

Powell won praise from Ohio Democratic Sen. Sherrod Brown, the chairman of the committee, and Pennsylvania Sen. Pat Toomey, the senior Republican on the panel.

“The president is putting results over partisanship, re-nominating a Federal Reserve chair of the other political party,” Brown said. “As chair, together with President Biden, he has helped us deliver historic economic progress.”

Still, Toomey also criticized some of the Fed's 12 regional banks for holding events that addressed climate change and “so-called racial justice,” which, Toomey argued, went far beyond the Fed's mandate. He cited one event, organized by the Federal Reserve Bank of Boston, in which he said participants called for defunding police.

“The troubling politicization of the Fed puts its independence and effectiveness at risk," Toomey said.

And Sen. Richard Shelby, an Alabama Republican, criticized Powell for the central bank's initial characterization of the price spikes that began this spring as “transitory.”

“I’m concerned if the Fed missed the boat on addressing inflation sooner, a lot of us are,” Shelby said. “As a result of that, the Fed under your leadership has lost a lot of credibility.”

Inflation has soared to the highest levels in four decades, and on Wednesday the government is expected to report that consumer prices jumped 7.1% over the past 12 months, which would be the largest such jump since 1982.

Powell said the Fed mistakenly expected that supply chain bottlenecks driving up prices for goods such as cars, appliances, and furniture would not last nearly as long as they have. Once unsnarled, prices for things like used cars, which have spiked in the past year, would come back down, he said.

But for now, those supply chain problems have persisted, and while there are signs they are loosening, Powell said that progress is limited. He noted that many cargo ships remain docked outside the port of Los Angeles and Long Beach, the nation's largest, waiting to unload.

The number of people working or looking for work also remains far below pre-pandemic levels, Powell noted. Millions of Americans have retired early, or are avoiding jobs because of fear of the coronavirus. The Fed had anticipated that more of those people would return to the workforce than have done so.

The smaller workforce has forced businesses to offer much higher pay to attract and keep employees. Powell said that isn't mainly why prices are high right now, but it “can be an issue going forward for inflation.”

Economists and former Fed officials are raising concerns that the Fed is behind the curve on inflation. Last Friday's jobs report for December, which showed a sharp drop in the unemployment rate to a healthy 3.9%, and an unexpected wage increase, has helped fan those concerns. While lower unemployment and higher pay benefit workers, those trends can potentially fuel rising prices by encouraging more spending.

At the Fed's most recent meeting in December, Powell said the central bank was rapidly accelerating its efforts to tighten credit with the goal of reining in inflation. The Fed will stop buying billions of dollars of bonds in March, ahead of its previously announced goal of doing so in June. Those bond purchases have been intended to encourage more borrowing and spending by lowering longer-term rates.

And Fed officials' expectation that they will raise short-term rates three times this year marks a sharp shift from September, when they were divided over doing it even once.

The flood of new omicron infections won't slow the Fed's shift toward policies more appropriate for an economy getting back to normal, Powell said at the hearing, because so far it doesn't appear to be weighing on the economy.

“It is really time for us to move away from those emergency pandemic settings to a more normal level,” he added. “It’s a long road to normal from where we are.”

US inflation will likely stay high even as gas prices fall

Churches can be ‘personalized ministry partner’ for local schools
NASHVILLE (BP) – In the midst of the back-to-school season, Southern Baptist churches are loving and serving the students, teachers and schools in their communities. Churches are meeting needs in a variety of ways including hosting back-to-school bashes, offering free school supplies and giving away free backpacks.

Afghan man charged in killing of 2 Muslims in Albuquerque
Police have announced a breakthrough in the killings of four Muslim men in Albuquerque, New Mexico. A man from Afghanistan — himself a Muslim — was charged Tuesday with two of the slayings, and authorities identified him as a prime suspect in the other killings that put the entire community on edge. Muhammad Syed, who is 51, was taken into custody a day earlier after a traffic stop more than 100 miles away.

Town honors Ahmaud Arbery day after end of hate crimes case
BRUNSWICK, Ga. (AP) — Ahmaud Arbery is being honored by his hometown after stiff sentences for hate crimes against the white men who chased and killed him. Dozens of people joined Arbery's family on a sweltering street corner Tuesday as Brunswick city officials unveiled signs designating a 2.7-mile roadway as Honorary Ahmaud Arbery Street. Arbery was fatally shot on Feb. 23, 2020, after being chased by three men in pickup trucks who wrongly suspected him of committing crimes.

Renaming Army bases that honor Confederates would cost $21M
NORFOLK, Va. (AP) — An independent commission says renaming nine U.S. Army posts that commemorate Confederate officers would cost $21 million. The name changes would lead to the rebranding of everything from welcome marquees and road signs to water towers and hospital doors. The Naming Commission released its final report to Congress on recommending the new Army base names Monday.