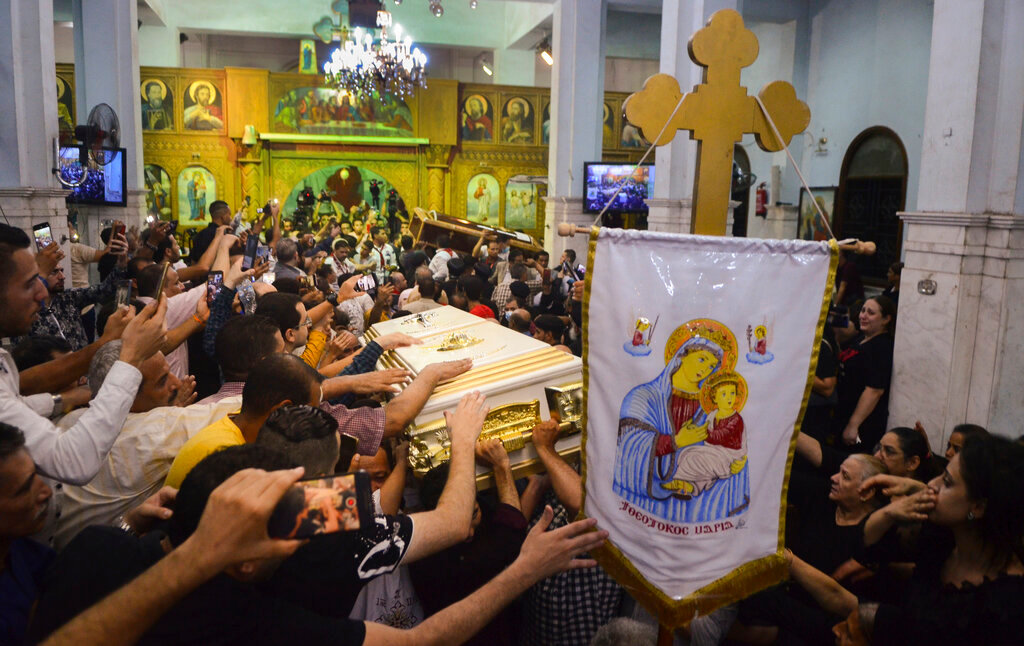 Mourners attend a memorial service for victims of a fire at a church in Greater Cairo that killed dozens on Sunday, Aug. 14, 2022. (AP Photo/Tarek Wajeh) 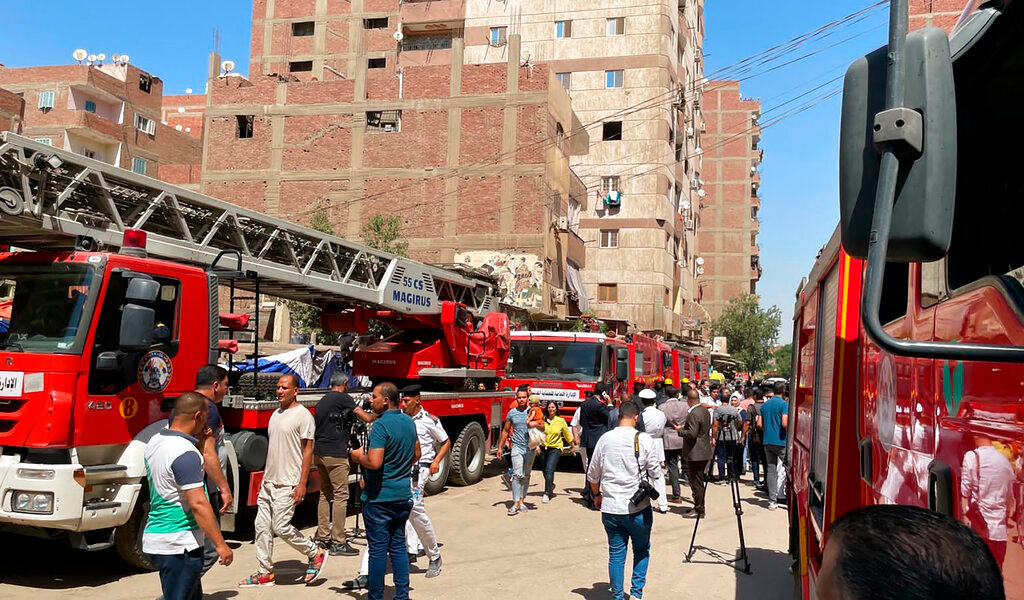 Emergency personnel work at the site of a fire at the Abu Sefein church in the densely populated neighborhood of Imbaba, Cairo Egypt, Sunday, Aug. 14, 2022. (AP Photo/Mohamed Salah) 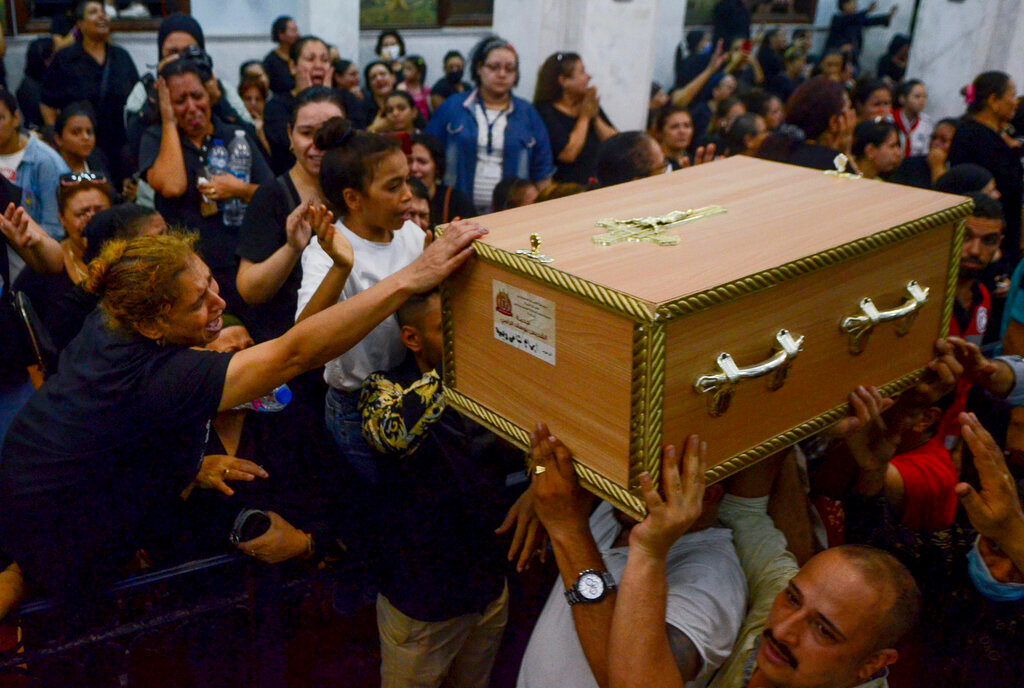 Mourners attend a memorial service for victims of a fire at a church in Greater Cairo that killed dozens on Sunday, Aug. 14, 2022. (AP Photo/Tarek Wajeh)
Previous Next
Posted Sunday, August 14, 2022 9:57 pm
By SAMY MAGDY, Associated Press

CAIRO (AP) — A fire ripped through a packed Coptic Orthodox church during morning services in Egypt’s capital on Sunday, quickly filling it with thick black smoke and killing 41 worshippers, including at least 15 children.

Several trapped congregants jumped from the upper floors of the Martyr Abu Sefein church to try to escape the intense flames, witnesses said. “Suffocation, suffocation, all of them dead,” said a distraught witness, who only gave a partial name, Abu Bishoy.

Sixteen people were injured, including four policemen involved in the rescue effort.

The cause of the blaze at the church in the working-class neighborhood of Imbaba was not immediately known. An initial investigation pointed to an electrical short-circuit, according to a police statement.

Weeping families waited outside for word about relatives who were inside the church and at nearby hospitals where the victims were taken. Footage from the scene circulated online showed burned furniture, including wooden tables and chairs. Firefighters were seen putting out the blaze while others carried victims to ambulances.

Witnesses said many children were inside the four-story building, which had two daycare facilities.

“There are children, we didn’t know how to get to them," said Abu Bishoy. "And we don’t know whose son this is, or whose daughter that is. Is this possible?”

A total of 15 children were killed in the fire, according to Copts United, a news website focusing on Christian news.

A list of victims obtained by The Associated Press said 20 bodies, including 10 children, were taken to the Imbaba public hospital. Three were siblings, twins aged 5 and a 3-year-old, it said. The church bishop, Abdul Masih Bakhit, was also among the dead at the hospital morgue.

Twenty-one bodies were taken to other hospitals.

Mousa Ibrahim, a spokesman for the Coptic Orthodox Church, told the AP that 5-year-old triplets, their mother, grandmother and an aunt were among those killed.

Witness Emad Hanna said a church worker managed to get some children out of the church daycare facilities.

“We went upstairs and found people dead. And we started to see from outside that the smoke was getting bigger, and people want to jump from the upper floor,” Hanna said.

“We found the children,” some dead, some alive, he added.

The country’s health minister blamed the smoke and a stampede as people attempted to flee the fire for causing the fatalities. It was one of the worst fire tragedies in Egypt in recent years.

The church is located in a narrow street in one of the most densely populated neighborhoods in Cairo. Sunday is the first working day of the week, and traffic jams clog the streets in Imbama and surrounding areas in the morning.

Some relatives criticized what they said were delays in the arrival of ambulances and firefighters. “They came after people died. … They came after the church burned down,” shouted one woman standing outside the smoldering church.

Health Minister Khaled Abdel-Ghafar countered that the first ambulance arrived at the site two minutes after the fire was reported.

Fifteen firefighting vehicles were dispatched to the scene to put out the flames while ambulances ferried casualties to nearby hospitals, officials said.

“I am closely following the developments of the tragic accident,” el-Sissi wrote on Facebook. “I directed all concerned state agencies and institutions to take all necessary measures, and immediately to deal with this accident and its effects.”

Abdel-Ghafar, the health minister, said in a statement that two of the injured were discharged from a hospital while the others were still being treated.

The Interior Ministry said it received a report of the fire at 9 a.m. local time, and first responders found that the blaze had broken out in an air conditioner on the building's second floor.

The ministry, which oversees police and firefighters, blamed an electrical short-circuit for the fire, which produced huge amounts of smoke. Meanwhile, the country’s chief prosecutor, Hamada el-Sawy, ordered an investigation and a team of prosecutors were dispatched to the church. He said most victims died of smoke inhalation.

By Sunday afternoon, emergency services said they managed to put out the blaze and the prime minister and other senior government officials arrived to inspect the site. Premier Mustafa Madbouly said surviving victims and families of the dead would receive payments as compensation and that the government would rebuild the church.

By late afternoon, caskets carrying the dead were transferred in ambulances for pre-burial prayers at two churches in the nearby Waraq neighborhood, as weeping women lined their path. Hundreds of mourners gathered at the churches for the funerals, before taking the bodies for burial in nearby cemeteries.

Egypt’s Christians account for some 10% of the nation’s more than 103 million people and have long complained of discrimination by the nation’s Muslim majority.

Sunday's blaze was one of the worst fire tragedies in recent years in Egypt, where safety standards and fire regulations are poorly enforced. In March last year, a fire at a garment factory near Cairo killed at least 20 people and injured 24.