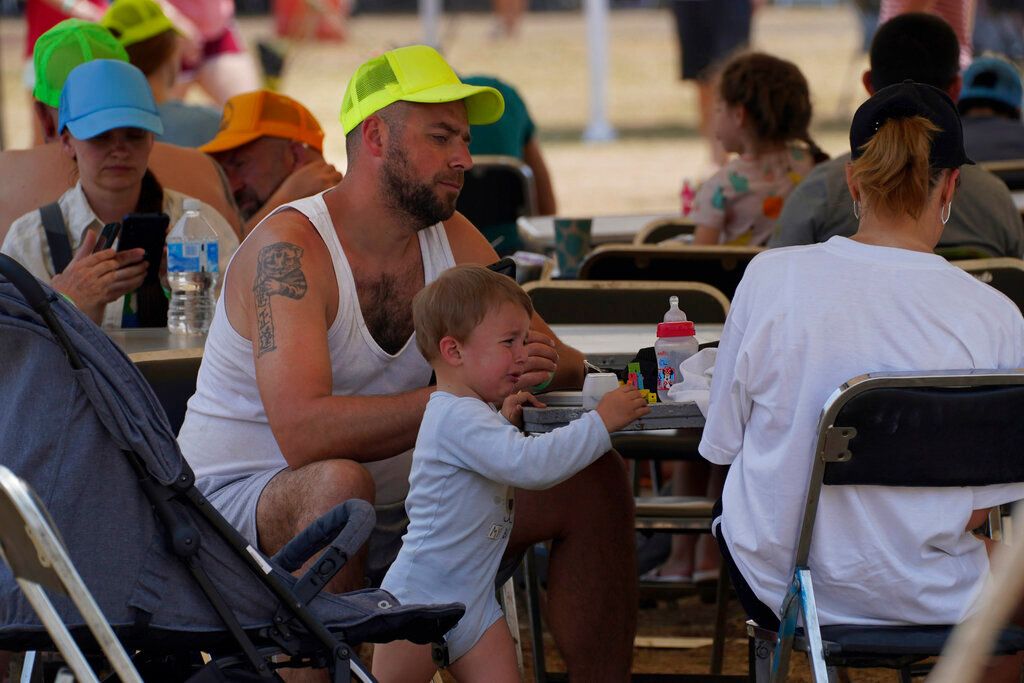 Ukrainian refugees displaced by the Russian invasion wait for next steps on their journey to the U.S., which has agreed to accept 100,000 of them. (AP Photo/Marco Ugarte)
Marco Ugarte 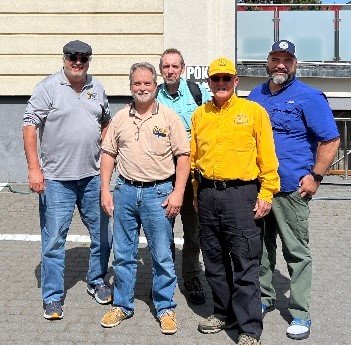 Members of a Georgia Baptist Disaster Relief team pose for a photo after arriving in Poland.
Previous Next
Posted Monday, May 9, 2022 4:02 pm
By ROGER ALFORD, The Christian Index

Georgia Baptist Disaster Relief workers, typically called on to help in the wake of natural disasters, have begun a 10-day deployment to Poland to help Ukrainian refugees caught up in a humanitarian crisis caused by the Russian invasion.

The five-man team arrived in Poland on Monday and have already begun making improvements at a community being used by refugees.

Longtime Disaster Relief volunteer Bob Sprinkel said he, along with the other Georgians, considers it an honor to help in the humanitarian crisis.

With Sprinkel are some of Georgia’s most experienced Disaster Relief volunteers: Darrell Barrett of Hiawasee, Q Mercer of Port Wentworth, Tim Beck of Toccoa, and Larry Green of Cairo. All have been part of a wide variety of deployments over the years.

“This allows us to do what the Great Commission instructs us to do,” Sprinkel said.

Nearly 5.5 million Ukrainians, mostly women and children, have fled Ukraine since Russia invaded its smaller neighbor on Feb. 24, according to the U.N. High Commissioner for Refugees.

The majority went to Poland where the Georgia Baptists are doing their part to make them more comfortable.

“We’re serving Christ in crisis; that’s what our mission is as Disaster Relief workers,” Sprinkel said. “It’s also where our heart is, to go and do for others, no matter where.”

Georgia Baptist Disaster Relief volunteers are most often deployed within the U.S., having ministered over the past year to victims of tornadoes in their home state, a major hurricane in Louisiana, and wildfires that destroyed homes in Colorado.

Georgia has a small army of trained disaster relief volunteers who serve in chainsaw brigades to clear fallen trees from homes and property, who man mobile kitchens in disaster areas, who spend long days shoveling mud and carrying soggy furnishing from flooded homes, who set up mobile showers and laundromats for survivors and volunteers in hard-hit areas.

Southern Baptists have been tag-teaming the humanitarian project, with the Georgia crew rotating in as others rotate out.

Sprinkel said the Georgia team is doing projects that are intended to improve quality of life for refugees.

“I feel so blessed just to be here,” he said.