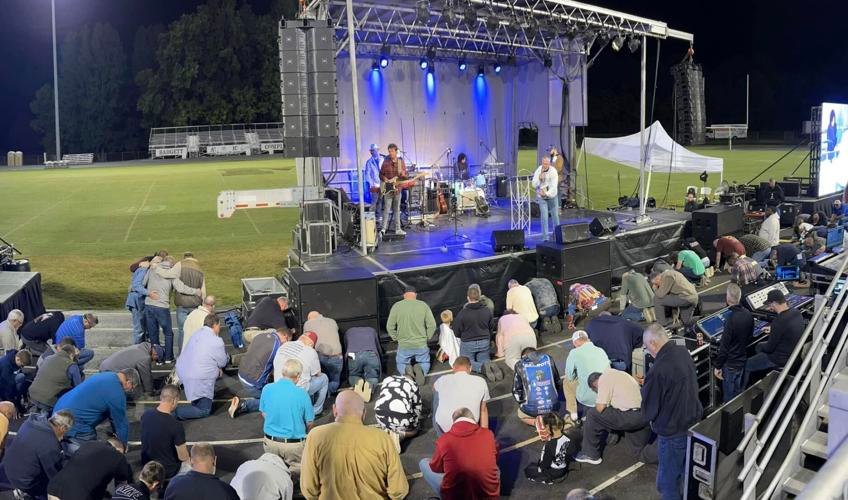 MADSONVILLE, Ky. (KT) – The cooperative effort of 45 churches in the Madisonville area to host a crusade preached by Georgia-based evangelist Rick Gage netted 172 professions of faith and 436 other decisions.

“It was incredible,” said Kevin Maples, the senior pastor of Madisonville First Baptist who helped spearhead the effort.

The fruit that came from the crusade didn’t happen overnight or by sharing on Facebook or with a few flyers. It came through preparation and prayer, Maples said.

“We had teams of people prayer walking our communities and this stadium,” Maples said. “We bathed this thing in prayer.”

It started with a call to Gage, who, through his Go Tell Ministries of Duluth, Ga., has been leading crusades for more than 30 years. Maples said one of the keys to putting on a successful crusade is to partner with people who had done it before.

“Why so many evangelistic events are not fruitful is they think they’re going to announce it and lost people will show up,” Maples said. “One of the greatest things to do is prepare and pray. You need to be all in, that’s they key. If you have a crusade, find people who had done it before. That’s why we worked with Rick Gage. He kind of scaled that down to a small-town environment.”

They came by the thousands to Madisonville-North Hopkins High School’s football stadium, filling the stands every night for the crusade that featured gospel music and evangelistic preaching. When is the last time a church revival drew thousands in a small town?

“Moving it from a church campus to a neutral place like the stadium is definitely an important factor,” Maples said. “The last night we had 3,000.”

The preparation and prayer paid off in big ways, the pastor said. The response was life-changing for many and community-changing as well for Madisonville, he added.

“Different dominations of churches worked together,” Maples said. “Everybody cooperating together.”

While nearly 200 made professions of faith and another 200 plus made decisions for God, there is likely more fruit to come, Maples said. “I did a crusade with Rick in Atlanta when I pastored there and we saw more saved in the follow-up process than the actual crusade. Somebody gets saved (at the crusade), goes back home and nobody in the house is a believer. They witness to them about what happened. It opens up a whole new network.”

Maples said it was important to move the focus away from the church and put it squarely on Jesus where it belongs. “People are not coming because they already have a preconceived notion of what church is. They’re rejecting what they think church is. We need to clearly communicate the gospel.”

He said personal testimonies from Gage, the team’s band leader and guests were full of gospel power.

“When people hear stories, they understand the people on the platform were once just like them. They made a decision for Christ and everything changed.”

Maples said Gage has clearly been called to be an evangelist and has acted on that calling. “God calls us all to different ministries and I believe in the calling of the evangelist. We all need to do work but we’re not all called to be vocational evangelism.”

Maples’ wish is that more churches find the office of evangelist to grow and prosper.

“I think it’d be great if we had crusades like this across Kentucky and America,” he said. “We need it.”

Resolutions may now be submitted for the 200th Georgia Baptist Convention