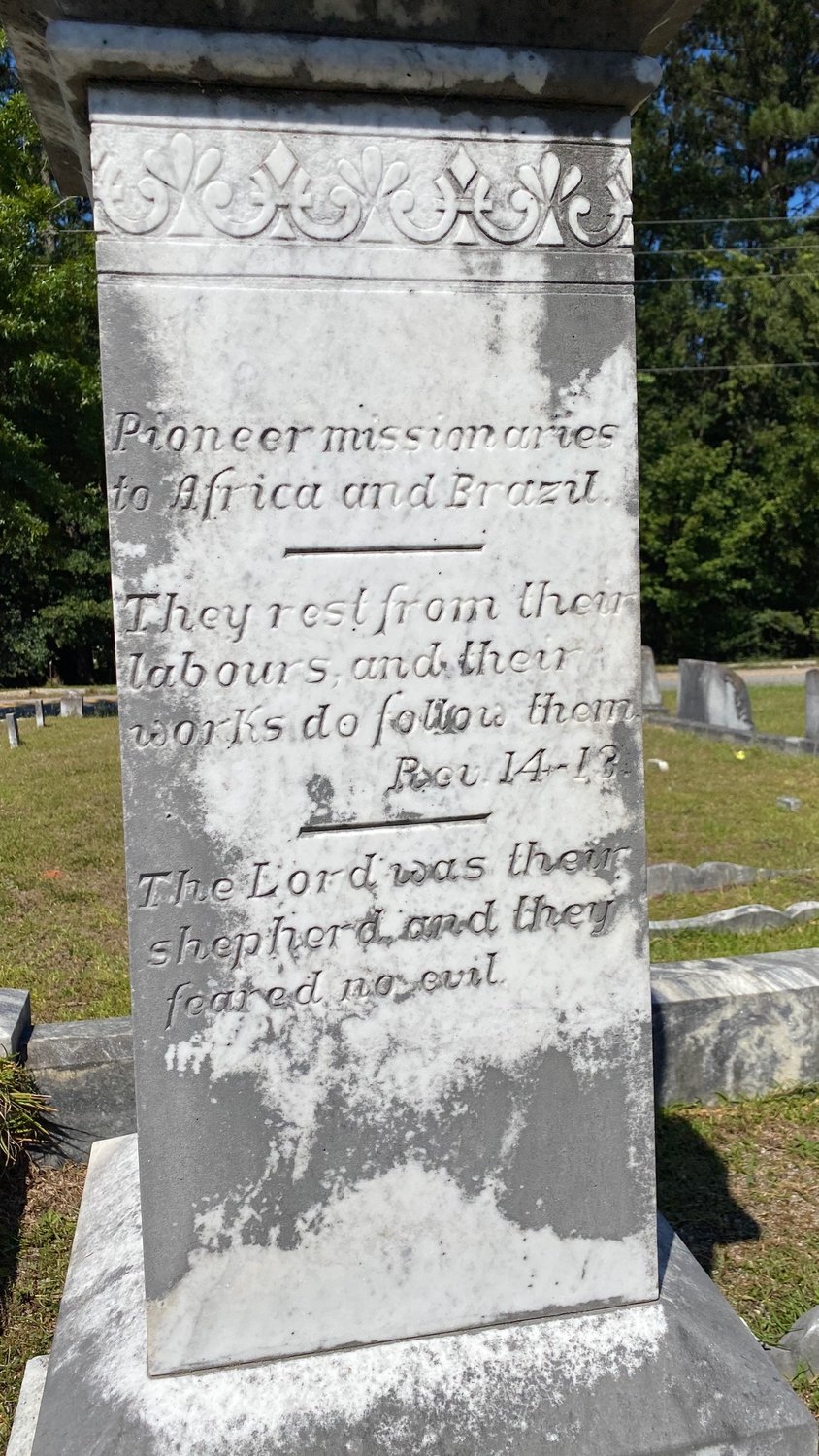 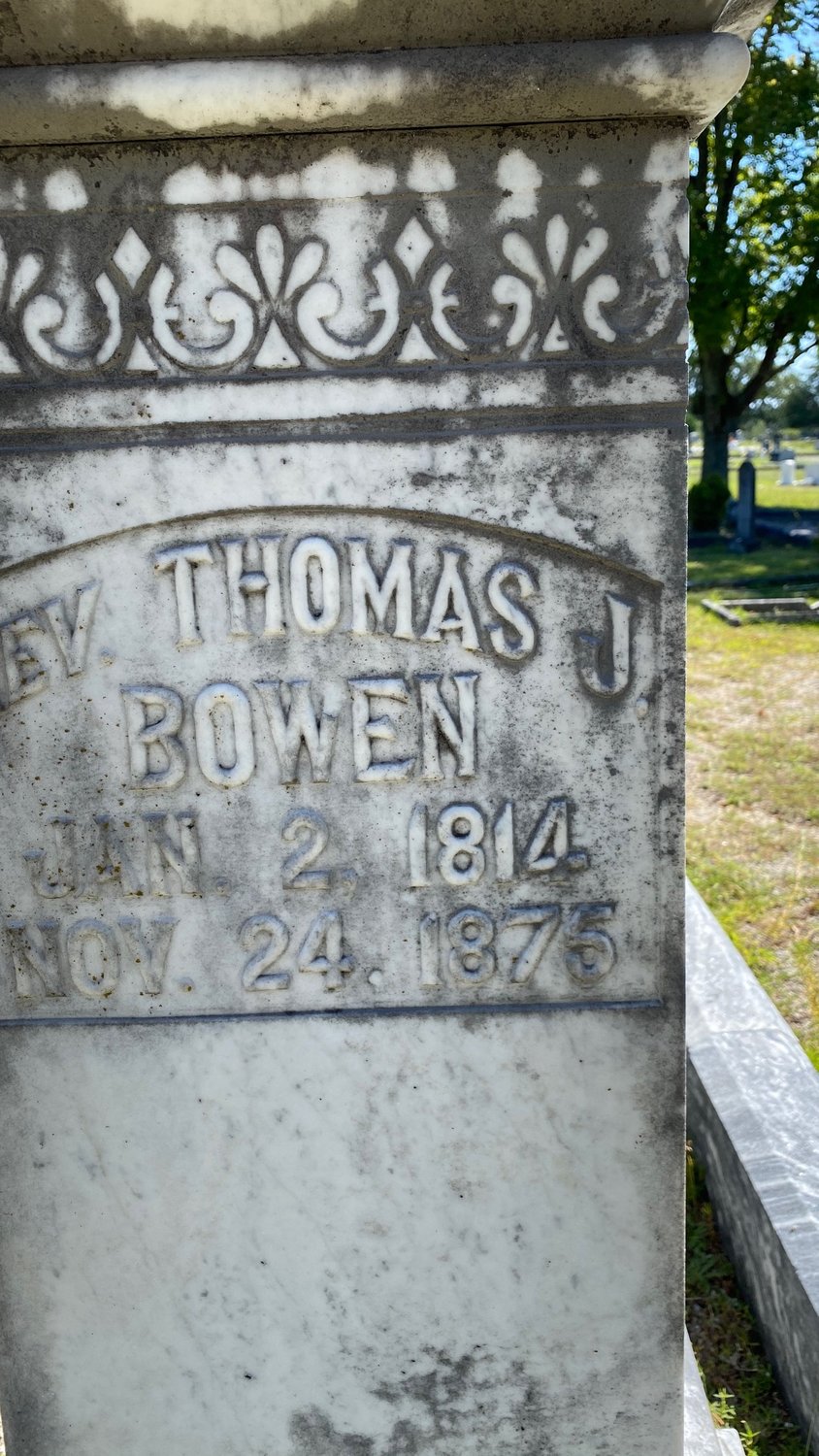 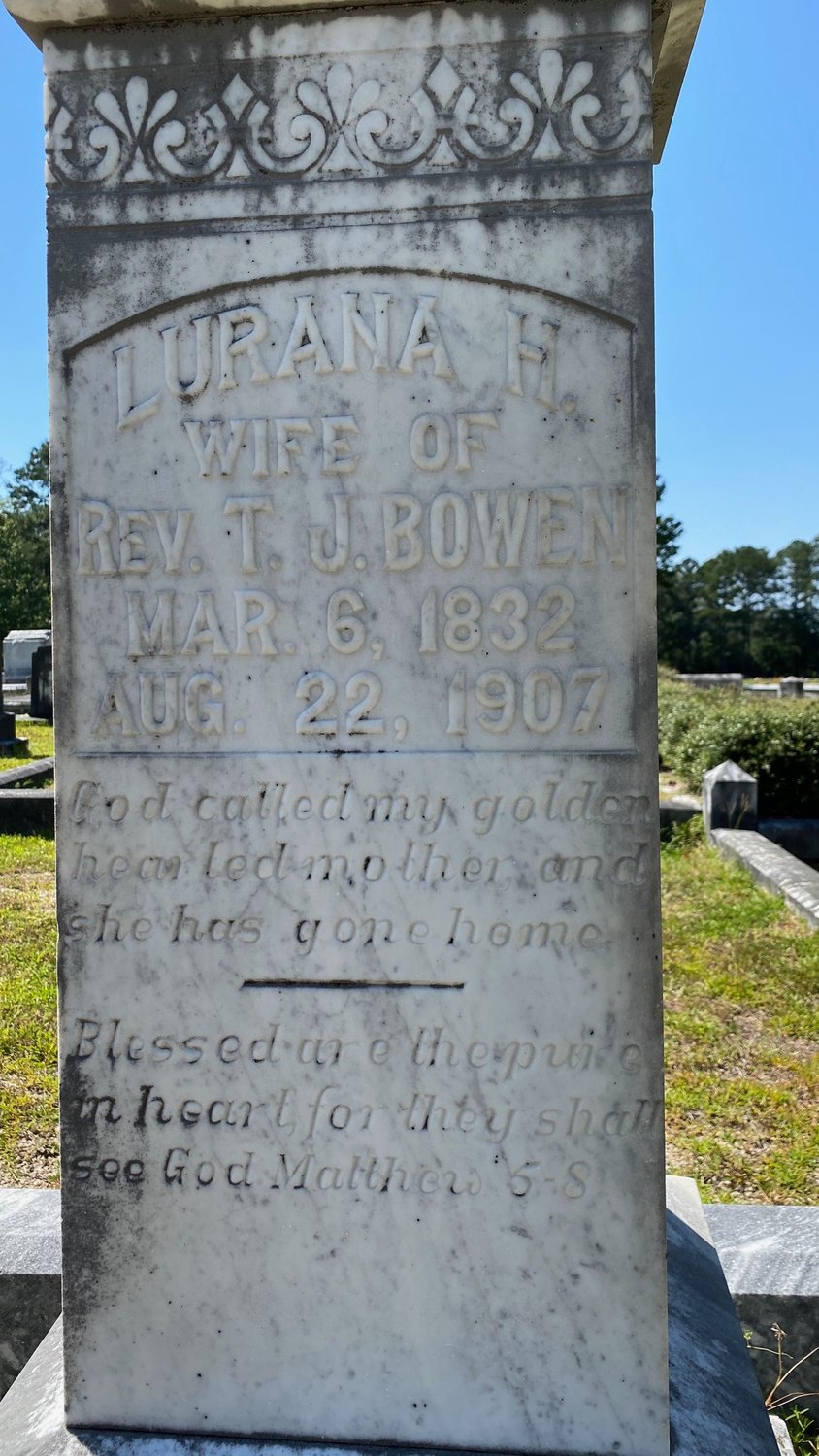 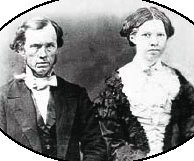 Looking at the life of Thomas Jefferson Bowen (1814-1875) and his struggles as a pioneer SBC foreign missionary, one might ask the question: “Was it worth it?”

There is a tombstone in Green County, Georgia inscribed with his name, but his remains do not lie beneath it. His body was laid in an unmarked pauper’s grave after he died at the Georgia Asylum for the Insane in Milledgeville. It is an inglorious resting place for Georgia’s first Southern Baptist Foreign Missionary: a man who pioneered work on two continents, in Yorba, Central Africa (Nigeria) and later among African born slaves in Brazil.

T.J. Bowen was born in rural Jackson County, Georgia. From his youth he possessed a restlessness, a wandering spirit. But this restlessness was not merely confined to wandering, it also applied to wondering. He possessed an intellectual curiosity that drove him eventually deep into the heart of Central Africa. Bowen was a true renaissance man: a sojourner, soldier, sage, scholar, and saint. He was also a man who experienced pain and suffering.

He began his sojourns as a soldier, when at age 17 when he enlisted to fight in the Creek Indian Wars. After that he went to Texas to fight in their War for Independence. He was commissioned an officer in a regiment of Georgians. Following the war, he remained becoming one of the first Texas Rangers.

Then, in response to a different kind of restlessness, he returned to Georgia. God was dealing with him, and he felt he could not become a Christian while living a lifestyle of a Ranger.  After returning to Georgia, he was converted and soon began preaching and pastoring in southern Georgia and north Florida.

In 1847 he wrote the newly established SBC Foreign Mission Board concerning an appointment to Central Africa. Raising his own support, much of it in Georgia, he went to Yorba which is now a part of Nigeria, in 1850. The work was dangerous. Disease decimated the ranks of early missionaries in Africa, and Bowen suffered almost from day one. This suffering would follow him physically and mentally for the rest of his life. Two other single men accompanied him on his first journey to Africa. One abandoned Bowen for safer confines in Liberia. His second companion died within the first year.  Adding to his anguish, Bowen went for two years without any contact nor funds from the Mission Board.

He dealt with the danger of being a foreigner in a strange land, language barriers, bandits, and cultural differences which posed threats. Furthermore, he lived in the shadow of conflict between warring tribes as warlords and their armies decimated entire regions to capture natives to enslave. Bowen wrote of seeing villages destroyed and abandoned and estimated that for every person enslaved between two and four others died in the process.

Upon his arrival in Africa, he began exploring rivers, towns, villages, and cities, in part looking for potential economic development which he felt would foster more support for mission opportunities. One of the most telling incidents of his drive to explore took place when he visited a village and was told that no one had ever summitted one of the mountains looming in the distance. It was not long before Bowen was standing on the summit.

His days as a soldier did not end in America. He was asked to help organize the defense the city of Abeokuta against an approaching army of 13,000 commanded by a powerful warlord king who was slave trader. This warlord had declared he would kill missionaries and enslave the inhabitants of the city. During the battle Anglican missionaries in the city manned an aid station. Bowen manned the city walls directing the defenses. During a crucial point in the battle, Bowen rallied troops who had begun to retreat.

The ensuing decisive victory over the slavers had international consequences. The British government, which had already abolished slavery in its empire, began moving to abolish the international slave trade all together. This was a critical turning point in world history and Bowen had played a crucial role.

Bowen the scholar felt it was important that people hear the gospel in their heart language. Many missionaries hired translators to communicate with native peoples. Bowen began to learn the language and the culture of the Yorba people to better communicate the message. Bowen began translating the Bible into the Yorba language and later composed a grammar and dictionary of the language which was published by the Smithsonian Institution. As late as the 1940’s his work was still the standard textbook on the subject.

Bowen the sage returned to America as a hero in January 1853. Although broken in health he desired to enlist others to return with him. Received as a hero, he was in demand to tell his story. He preached to the U.S. Congress and testified before Congressional committees. He was invited to speak in both secular and sacred places sharing the work and about the people of Yorba. He spoke on college campuses challenging young men to heed the call to missions.

During this brief season in America, he met and married Lurana Davis of Greensboro, Georgia. At age 21 she was 19 years younger than Bowen. She was from a wealthy family who were very involved in Baptist work. Her father and brother-in-law had both been converted in the Great Revival of 1827-28. She attended the Monroe Female Academy, a Baptist finishing school for young ladies, and was well educated for her era. Her journals located in the SBC Library and Archives in Nashville are a heart wrenching view of the struggles of a pioneer missionary wife.

Returning to Africa in July 1853 with two additional couples and expecting the later arrival of a young single man their hopes were high. All were ready to focus on the work, but disease and death soon began to take their toll. The Bowens were both ill much of the time and their first daughter born in Africa would only live a few months.

None the less they pressed deeper into Central Africa and although only there a few years established a bridgehead for the gospel as other missionaries continued to arrive on the field. Broken in health, they returned to Georgia in 1856. Returning to America he published a memoir “Adventures in Central Africa in 1857” which increased his fame across the nation.

After a season in America and realizing that the climate of Yorba would not permit their return, they wrote the Foreign Mission Board about appointment to Brazil. It was their desire to work among Yorba speaking slaves in that county. Because of opposition of the Catholic church, Brazilian laws, illness, the imprisonment of Bowen, and the pending U.S. Civil War their ministry in Brazil was short lived, less than a year, returning to America in early 1861.

Finally, T. J. Bowen can be described as a saint. Although they are forgiven, saints are imperfect people. The final years of T. J. Bowen’s life, to borrow a phrase could be described as “days of glory, seasons of night.” There were some good days, but the combination of recurring waves of tropical illnesses which had followed them from Africa took their toll. In addition, he was probably suffering from PTSD. Bowen had first acknowledged that he was dealing with depression while still in Africa, his mental health declined along with his physical health.

Bowen began self-medicating with alcohol and laudanum to deal with the pain and depression. He sought treatment at the Georgia Asylum for the Insane. Later arrested on several occasions he was sent to the Asylum only to escape. Baptists including his church in Greensboro, where he once pastored, began to separate themselves from Bowen.

For 15 years he had seasons of remission and hope intertwined with bouts of depression. He began wandering in Florida and Texas leaving Lurana and their two daughters in Georgia. At one point she did not receive a letter from him for two years. Eventually, he returned to the Asylum for the seventh time, where he remained a little over a year until his death in 1875. He was buried in an unmarked pauper’s grave.

Lurana and their two surviving daughters remained in Greensboro. She had organized the first Sunday School in Nigeria and later organized one of the first Children’s Missionary Sunbeam Bands in Georgia. She lived until 1907 and is buried in the Davis family plot in Greensboro Cemetery. On the east side of her obelisk is inscribed, “Lurana H. wife of Rev. T. J. Bowen, March 6, 1832-August 22, 1907.” On the north side is inscribed “Rev. Thomas J. Bowen, January 24, 1814-November 24, 1875.”  On the south side it reads “Pioneer Missionaries to Africa and Brazil.”

A few years ago, I met someone from Nigeria while attending a Georgia Baptist Convention. I asked if he knew the story of Bowens to which he replied. “no.” Sharing the sacrifices that the Bowen family made, the tragedy of the later years of his life, I asked him the question; Was it worth it?

With a gleam in his eye, this older man who is a product of the sacrifices and ministry of the Bowens looked at me and confidently affirmed, “Yes it was worth it."

As many churches focus on international missions during this season and as Georgia Baptists prepare to celebrate the 200th Anniversary of the GBC in 2022, it is fitting that mission pioneers like the Bowens, who paved the way and suffered, be remembered.  They stand as a reminder that Georgia Baptists purpose in 1822 was uniting to bring out the best in each other in support of missions and education. Supporting missions and missionaries is still worth it today.

To support those who often suffer greatly for the gospel, that the gospel may be heard. It was worth the effort then and to carry out the Great Commission . . . it is still worth it today.

Postscript: While doing additional research for this column I came across a book published earlier this year on the life of T.J. Bowen titled “Unthinkable: The Triumph and Endurance of Forgotten American Hero T. J. Bowen” by Jim Hardwicke.
___
Charles Jones is a retired  Georgia Baptist pastor, church historian, and newspaper columnist.

Stocks end lower, nearing but not quite in a bear market
NEW YORK (AP) — Stocks ended another volatile day lower on Wall Street Thursday, bringing the market closer to its first bear market since the beginning of the pandemic.

Sweden, Finland push ahead with NATO bids as Turkey objects
STOCKHOLM (AP) — Sweden and Finland have pushed ahead with their bids to join NATO even as Turkey insists it won’t let the previously nonaligned Nordic countries into the alliance because of their alleged support for Kurdish militants.

Oklahoma passes strictest abortion ban; services to stop
OKLAHOMA CITY (AP) — Abortion providers in Oklahoma say they will no longer provide the service in the state after the governor signs the latest pro-life measure heading to his desk.

California Baptists excited to host SBC annual meeting, ask for Great Commission help
ANAHEIM, Calif. (BP) – The California Southern Baptist Convention (CSBC) is asking fellow Southern Baptists to join them in Anaheim and consider taking the next step. In a video called “Consider California,” released by the CSBC, church leaders take viewers on a tour of the Golden State and highlight the need for Gospel impact.