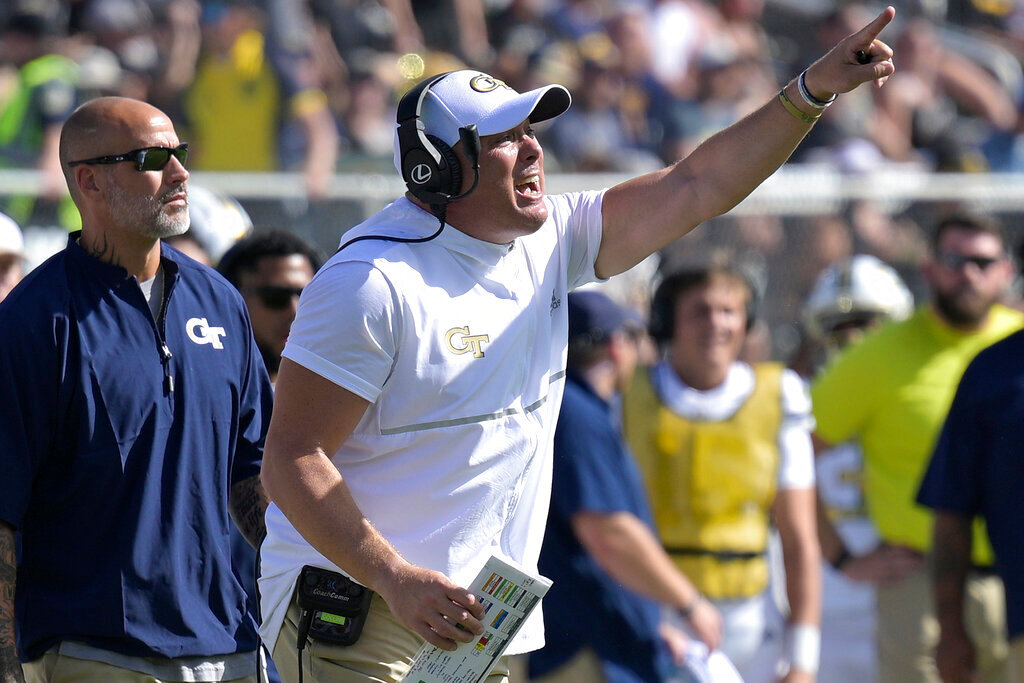 Georgia Tech head coach Geoff Collins reacts on the sideline after a play during the first half against Central Florida, Saturday, Sept. 24, 2022, in Orlando, Fla. (AP Photo/Phelan M. Ebenhack) 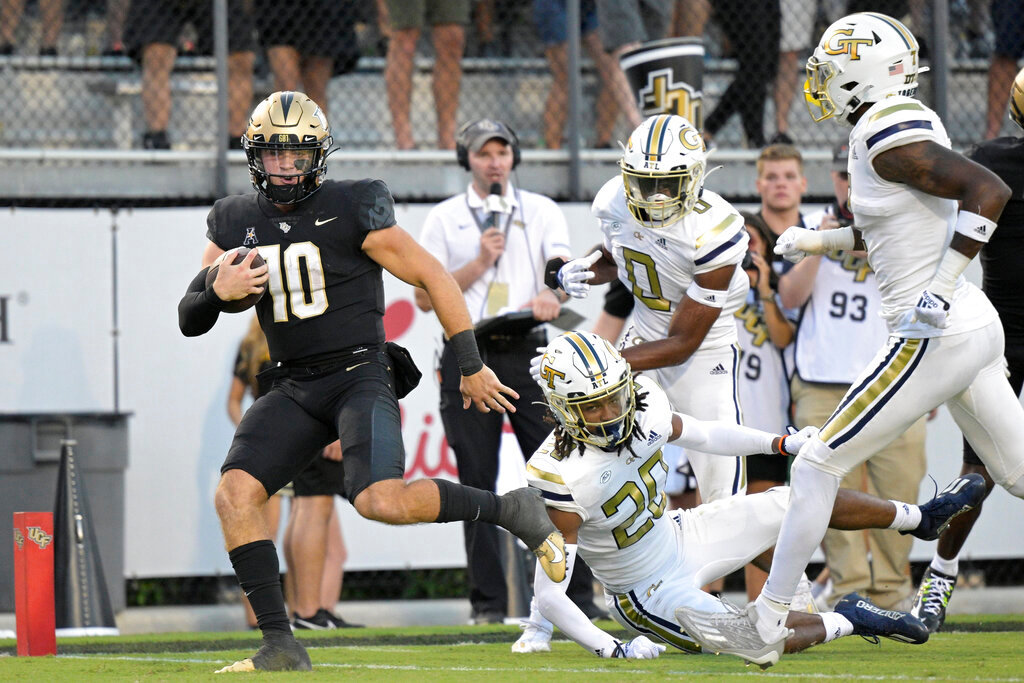 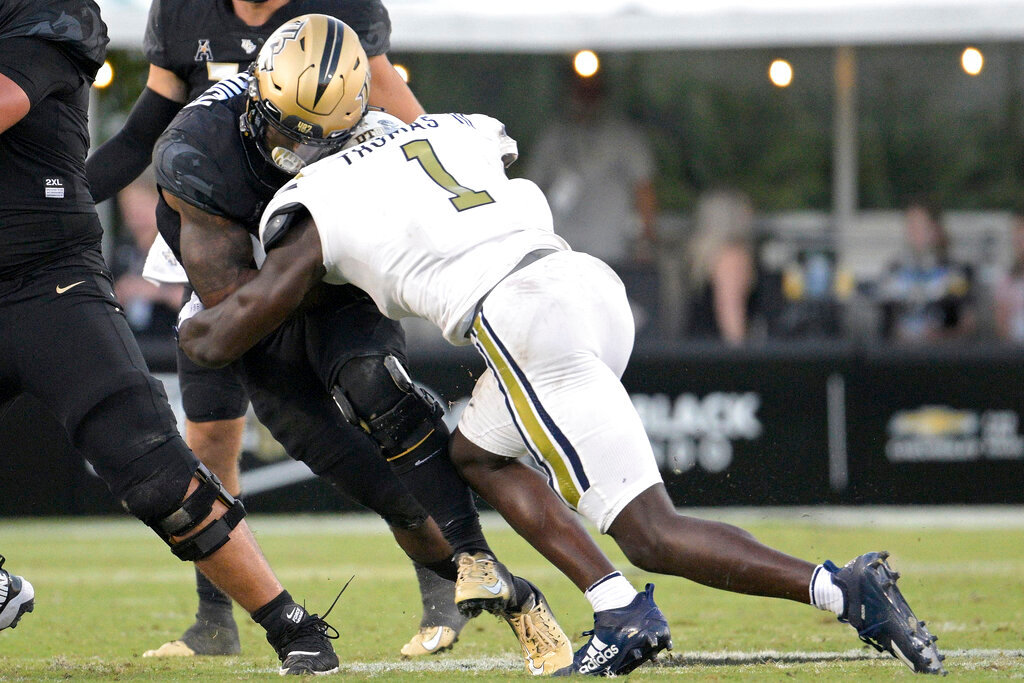 Central Florida running back RJ Harvey, left, is tackled by Georgia Tech linebacker Charlie Thomas (1) after rushing during the second half Saturday, Sept. 24, 2022, in Orlando, Fla. Thomas was penalized for targeting on the play and was disqualified from the game. (AP Photo/Phelan M. Ebenhack)
Previous Next
Posted Tuesday, September 27, 2022 10:53 pm
By PAUL NEWBERRY, Associated Press

ATLANTA (AP) — Less than four years after Geoff Collins arrived on campus, exuding optimism and making bold plans to compete at the highest levels of college football, Georgia Tech is in a far different position.

A month into the season, the Yellow Jackets are in a state of flux after firing Collins on Monday, a decision that university President Ángel Cabrera said was unavoidable after the coach posted a 10-28 record. Collins' dismal showing also took down the man who hired him, athletic director Todd Stansbury, making him the first top sports administrator the school has ever fired.

“This was a difficult but necessary decision,” Cabrera said during a news conference Tuesday. "Ultimately, the results haven't been there and a new approach is necessary to return our program to where it belongs.”

In a message clearly aimed at big-money donors and a disgruntled fan base, Cabrera vowed to provide whatever resources are necessary to turn around a football program that became a laughingstock under Collins.

The Yellow Jackets have lost nine straight games to Football Bowl Subdivision opponents, the last five by a combined score of 210-20 with three shutouts.

“I want you to hear clearly that I am personally committed to building and maintaining a world-class athletic program,” said Cabrera, who didn't take questions from the media. “This is personal to me."

Brent Key, who was Collins' assistant head coach, has taken over as interim head coach at his alma mater.

It's the first time leading a program for Key. If Georgia Tech (1-3) shows enough progress over the final eight games — beginning with Saturday's contest at No. 24 Pittsburgh — maybe he'll get a shot at removing interim from his title.

“I think this is one of the greatest jobs in the country," Key said. "I'm hopeful the next eight games, the next 10 weeks, that our work on the field would put our coaching staff in position to be able to have those conversations.”

In his first 24 hours on the job, Key already made some notable changes, including having linebacker coach Jason Semore take on the additional title of special teams coordinator.

The Yellow Jackets were totally inept at that phase of the game under Collins, already giving four blocked punts this season.

In another sign of him breaking with his former boss, Key said the team will start putting out a traditional depth chart — a practice that Collins eschewed in favor of a convoluted system known as "Above The Line,” which listed the players who had performed well enough in practice to earn playing time without actually giving starters and backups.

Frank Neville, Cabrera's chief of staff, has taken over as interim athletic director. His main focus will be hiring a permanent AD before the end of football season, so that person can make the call on Collins' ultimate replacement.

Neville also wants to make sure the current football players don't feel left behind with so much focus on the future.

“We need to all dig in and help the football program get back on track,” Neville said. “They’re not quitters. We can’t quit on them.”

Neville and Key both said the school will continue to promote its big-city location to potential recruits, but they surely know after the Collins' debacle that wins and losses are more important when it comes to attracting big-time talent.

To that end, Georgia Tech must step up its financial investment to keep up with powerhouse programs such as Georgia and Clemson. The athletic program has long been hampered by attendance issues, fundraising struggles, and tight budgets.

“How do we increase our sources of revenue? How do we mobilize our community to support the program?" Neville said. "Our objective is clearly to have a competitive program and to be able to make the financial investments necessary to do that.”

Key acknowledged that they can't make any major scheme changes during the season, but he does want to instill a new attitude in the downtrodden program.