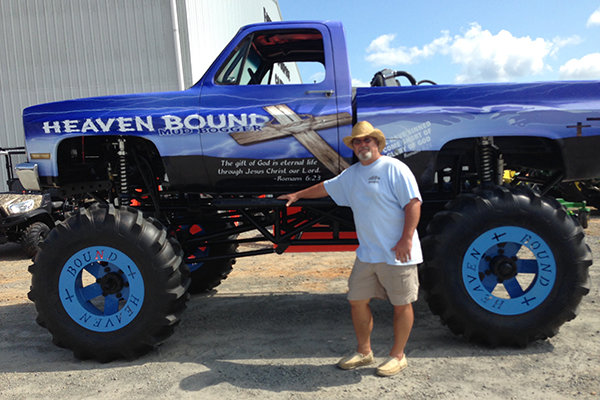 There’s a lot to see at a mud bogger race. The trucks are big. They’re loud. You can’t avoid seeing them.

But somehow, in the middle of all of that, you notice Terry Billings’ truck — the Heaven Bound Mud Bogger. It’s bigger and louder. People want to look at it, climb up the step ladder, sit in the truck and get their picture taken.

And Billings uses that for the sake of the gospel. “God gave me this vision to reach out to people who are getting ignored — the good ol’ boys,” he said. “I’ve always been one of them. I was an alcoholic, and God reached out and touched me. If He hadn’t, and if people hadn’t, I wouldn’t have been saved. So there’s nowhere that’s too far for me to go to reach them.”

Some years ago, Billings saw his old truck sitting in the field, weeds growing up through it, and he heard God whisper that He could take that old truck and make something new out of it.

“At that point, it was worthless,” Billings said.

He had spent a lot of years in that truck going mudding and drinking out on the farm. He’d lived his life far from the shadow of any church — he hadn’t gone in at least 25 years, except maybe to some weddings and funerals.

And then one day his son got saved and invited him to his baptism.

“I figured that was a good dad move to go see my son get baptized,” he said. “I went and it was kind of nice to be there. But by 1 o’clock, I was drinking again.”

The next Sunday, his son invited him back. And he went.

“I’d kind of enjoyed getting dressed up that last Sunday,” Billings said.

When the third Sunday came, so did his son’s invitation — and Billings went again.

“I left after church that day, and my plan was to go back to the restaurant and chill out and drink for the rest of the day,” said Billings, who ran Billy’s BBQ in Gordo. “But boy, did God have something waiting for me — at Walmart.”

As he walked the aisles of the store, he said he felt the conviction of God press on his heart.

“All of a sudden, I felt so visible, like everything I’d ever done was so visible,” Billings said. “His eyes were on me. I tell everyone I had a Damascus Road experience that day, but it was a blue light special — I got saved right there in Walmart at 45 years old. And my life has never been the same.”

He gets choked up talking about it. When God’s light broke through his darkness, he parked the old farm truck and traded his mudding and drinking for a pastorate.

God made something new out of him, Billings said. And as he looked at that old truck that day, he knew God had plans for it too.

“Over two years, God provided $100,000,” Billings recalled. “When people heard what we wanted to do, they just kept writing us checks.”

So the Heaven Bound Mud Bogger was born — a massive truck with a picture of a cross on the side and verses about finding eternal life in Jesus. The tailgate says, “Covered in mud, but washed in the blood.”

It’s a story as big as his truck.

Billings isn’t shy about asking people where they are with Jesus and telling them how his life was changed and how Jesus can change theirs, too.

He spends a lot of weekends at mud races. But that isn’t the only place he gets people’s attention.

“Every time I stop anywhere, everybody in the gas station or Dollar General unloads and goes out to look at it. Then I get to tell them my story and what Jesus did for me,” Billings said.

"All it takes is a trip to Hardee’s, and we have church.”