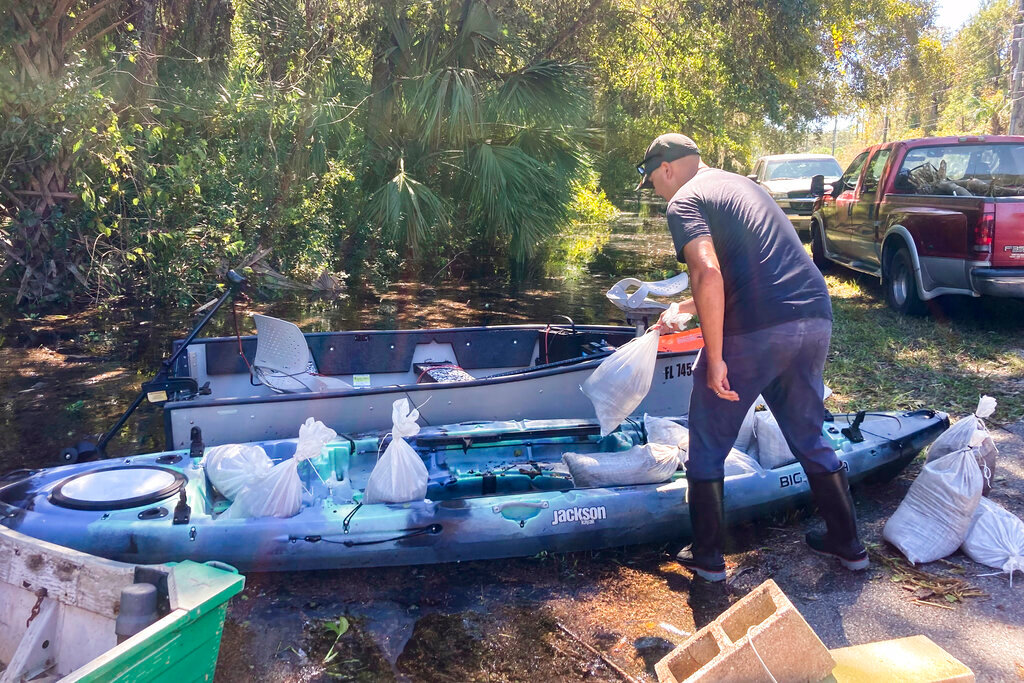 Gabriel Madlang loads sandbags onto his kayak so he can fortify his house on a submerged street in Seminole County, Fla., on Sunday, Oct. 2, 2022. Residents in central Florida donned fishing waders, boots and bug spray and canoed or kayaked to their homes on streets where floodwaters continued rising Sunday despite it being four days since Hurricane Ian tore through the state. (AP Photo/Mike Schneider)
Mike Schneider
Posted Sunday, October 2, 2022 8:55 pm
By MIKE SCHNEIDER, Associated Press

GENEVA, Fla. (AP) — Residents in central Florida donned fishing waders, boots and bug spray and canoed or kayaked to their homes on streets where floodwaters continued rising Sunday despite it being four days since Hurricane Ian tore through the state.

The waters flooded homes and streets that had been passable just a day or two earlier.

Ben Bertat found 4 inches (10 centimeters) of water in his house by Lake Harney off North Jungle Street in a rural part of Seminole County, north of Orlando, after kayaking to it Sunday morning. Only a day earlier, there had been no water.

“I think it’s going to get worse because all of this water has to get to the lake” said Bertat, pointing to the water flooding the road. “With ground saturation, all this swamp is full and it just can’t take any more water. It doesn’t look like it’s getting any lower.”

Gabriel Madlang kayaked through 3 feet (1 meter) of water on his street, delivering sandbags to stave off water that was 2 inches (5 centimeters) from entering his home.

“My home is close to underwater,” Madlang said Sunday morning before paddling to his house. “Right now, I’m just going to sandbag as much as I can and hope and pray.”

Two hours later, his house still was not flooded, and he was retrieving more sandbags to cover the back side of the house.

"We will see what happens," he said.

Madlang's street was in a flood zone and most of the residents with mortgages on the street of about 30 houses had flood insurance, but several of the residents who had lived there for decades didn't, Madling said.

Seminole County officials warned residents this weekend that flooding could continue for several days, particularly in areas near the St. Johns River and its tributaries, and said 1,200 residents have been affected by the flooding or other damage from Ian.

“Even as the rain has stopped, we still have the opportunity for more flooding," Alan Harris, director of Seminole’s office for emergency management, said at a news briefing.

Tara Casel has never seen flooding on her street near Lake Harney like she did Sunday morning, despite living through multiple hurricanes. She and her husband used a canoe to get to their house and feared it would have water.

“We were here last night and it was pretty bad,” she said. “But this morning looks worse.”