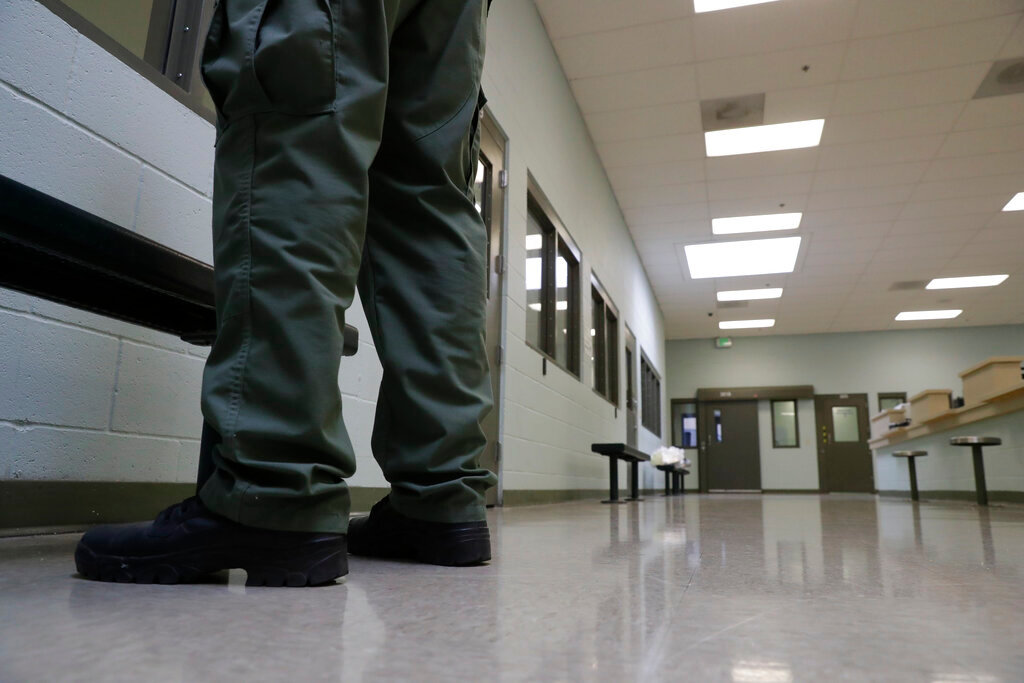 In this Aug. 28, 2019, photo, a guard stands in the intake area at the Adelanto ICE Processing Center in Adelanto, Calif. (AP Photo/Chris Carlson, File) 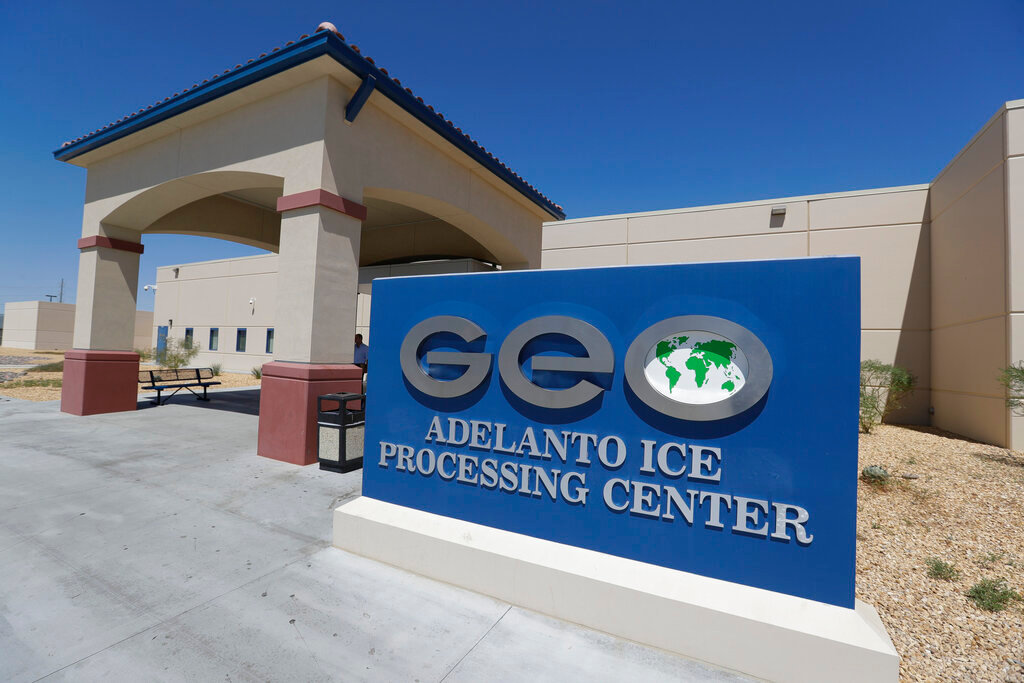 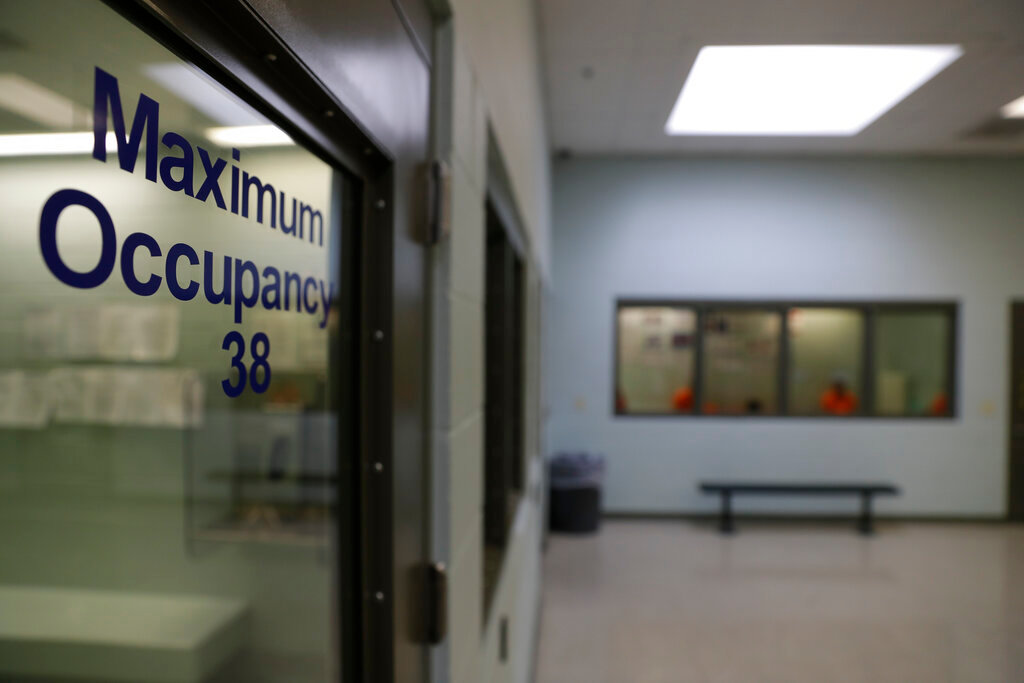 The Adelanto facility is an extreme example of how the U.S. government’s use of guaranteed minimum payments in contracts with private companies to house immigrant detainees might have a potential financial downside. In these contracts, the government commits to pay for a certain number of beds, whether they’re used or not.

The government pays for at least 1,455 beds a day at Adelanto, but so far this fiscal year reports an average daily population of 49 detainees. Immigrant advocates say the number of detainees at Adelanto is currently closer to two dozen because authorities can’t bring in more migrants under a federal judge’s 2020 pandemic-related ruling.

The U.S. government pays to guarantee 30,000 immigration detention beds are available in four dozen facilities across the country, but so far this fiscal year about half, on average, have been occupied, according to Immigration and Customs Enforcement data. Over the past two years, immigration detention facilities across the United States have been underutilized as authorities were forced to space out detainees — in some cases, such as at Adelanto, by court order — to limit the spread of COVID-19.

“The government is still paying them to keep the facility open,” said Lizbeth Abeln, deportation defense director at the Inland Coalition for Immigrant Justice in Southern California. “It’s really concerning they’re still getting paid for all the beds every single day. It’s empty.”

Immigration and Customs Enforcement currently reports 23,390 detainees in custody, official data shows. The agency has long spent money on unused detention space by including guaranteed minimum payments in its contracts, according to a Government Accountability Office report focused on the years before the pandemic. The minimum number of beds the government paid to guarantee rose 45% from the 2017 fiscal year to May 2020, the report said.

On Monday, an agency spokesperson said in an email that Immigration and Customs Enforcement doesn’t comment on pending litigation and is complying with the court’s order regarding Adelanto.

In annual budget documents, officials said the agency aims to use 85% to 90% of detention space generally, and pays to have guaranteed minimum beds ready to go in case they’re needed. Officials wrote that they need flexibility to deal with emergencies or sudden big increases in border crossings. They said safety and security are the top priority at the detention centers, while acknowledging the pandemic “greatly decreased bed utilization.”

The average cost of a detention bed was $144 each day during the last fiscal year, the documents show.

Immigrant advocates say the pandemic is proof that the U.S. doesn’t need to detain immigrants as much as authorities have claimed. Deportation agents have ramped up use of a monitoring app to keep tabs on immigrants heading for deportation hearings instead of locking people up, they said. As of June, the agency was tracking more than 200,000 people using the SmartLink app, the government's data shows.

“The federal government, probably like all of us, didn’t think COVID would go on this long,” said Michael Kaufman, senior staff attorney at the American Civil Liberties Union of Southern California, which sued for the release of detainees in Adelanto. “This has been an accidental test case that shows they don’t need a detention capacity anywhere near what they’re saying.”

The Adelanto facility — which is run by Boca Raton, Florida-based The Geo Group — is one of the biggest in the country and often houses immigrants arrested in the greater Los Angeles area. It has long been subject to complaints by detainees of shoddy medical care, and on a 2018 visit to the facility inspectors also found nooses in detainees cells and overly restrictive segregation.

In August 2019, more than 1,600 detainees were held at the facility 60 miles northeast of Los Angeles, according to a state report.

Soon after COVID-19 hit, immigrant advocates sued over safety concerns. U.S. District Judge Terry Hatter barred ICE from bringing in new detainees and capped the number of detainees to 475. He ordered detainees be spaced out and have room to stretch, walk and use the restroom and shower, and noted an unknown number of staff and detainees didn’t wear masks.

“This case involves human lives whose reasonable safety is entitled to be enforced and protected by the Court pursuant to the United States Constitution,” Hatter wrote in 2021.

Since then, immigration authorities have been bringing new detainees to a 750-bed annex in Adelanto that was previously a state prison. But immigrant advocates said the annex is also running well below occupancy.

Geo, which also runs the annex, declined to comment and referred all questions to Immigration and Customs Enforcement.

“Here in Los Angeles, we have only a limited amount of bed space so some of the people that we arrest, if we don't have bed space, we're going to fly them to Phoenix or Atlanta or another part of the country for bed space,” Giles said during a recent interview. “That doesn’t necessarily affect our operations, but it puts more logistics into it.”

In Adelanto, the Department of Justice runs immigration courts where detainees have their deportation cases heard. Currently, judges in these courtrooms are hearing the cases of immigrants elsewhere in the country using video due to dwindling numbers at the desert facility, said Immigration Judge Mimi Tsankov, president of the National Association of Immigration Judges.

Over time, hundreds of detainees have been released on bond or due to health concerns or deported, and some wings of the facility have been closed down, said Eva Bitran, an ACLU staff attorney.

“It's a tremendous waste of resources,” she said.