Paul Chitwood: ‘My prayer has always been that God would allow me to see each of my children come to Christ’ 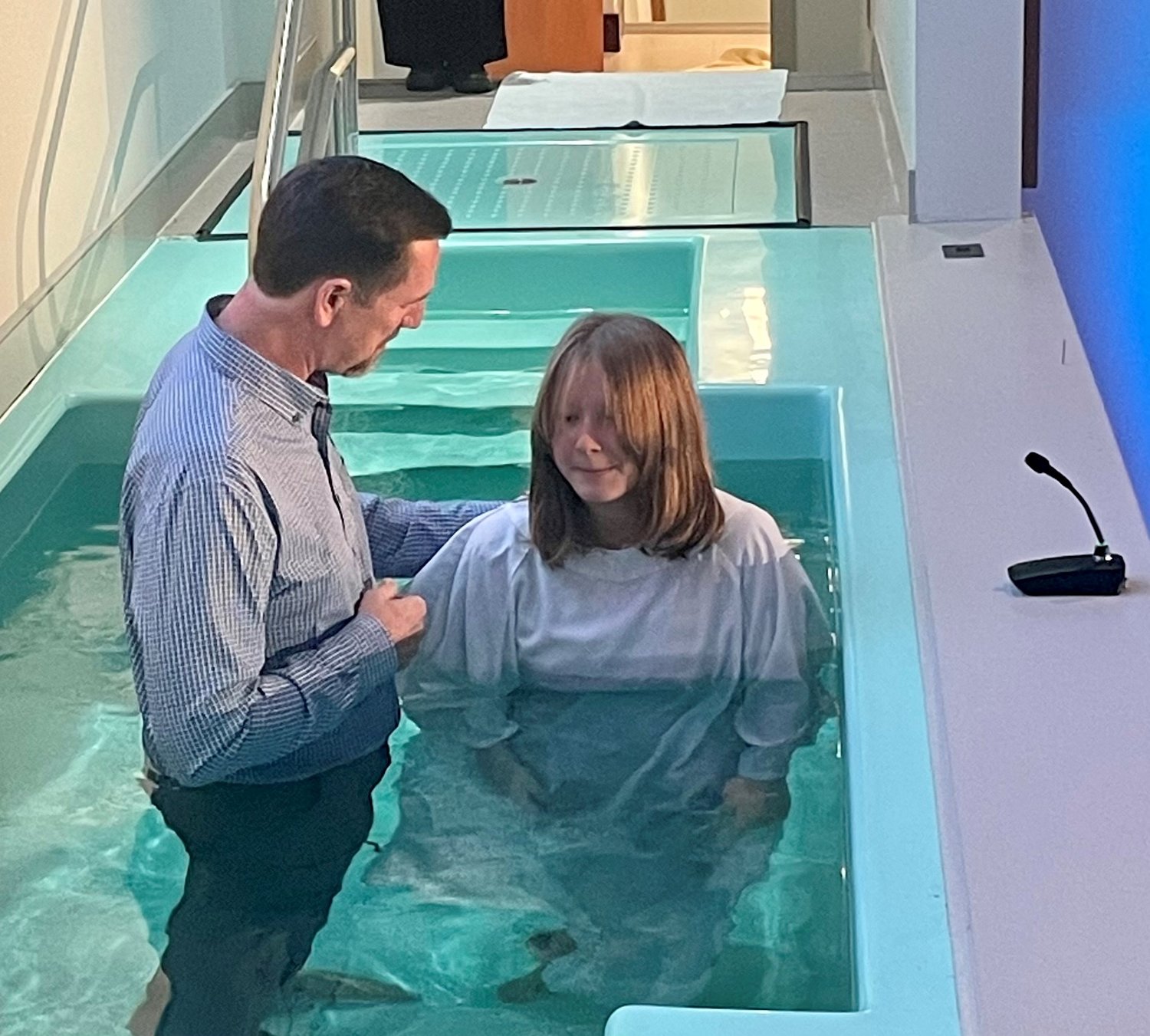 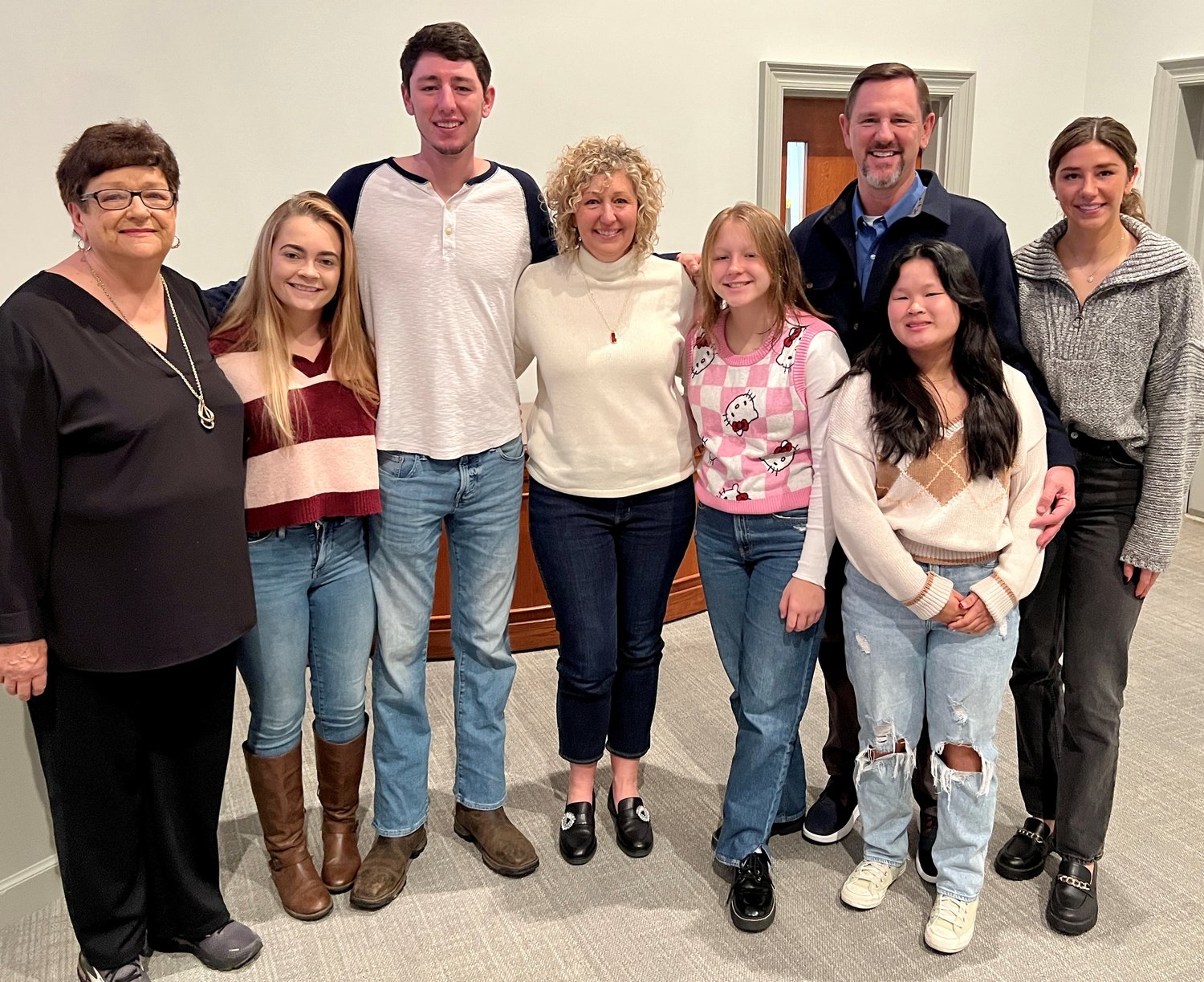 The Chitwood family gathers for a photo after the baptism of their youngest child. From left to right, they are Grandmas Selma Herron and Derricka, Daniel, Michelle, Lilly, Paul, Cai and Anna Chitwood. 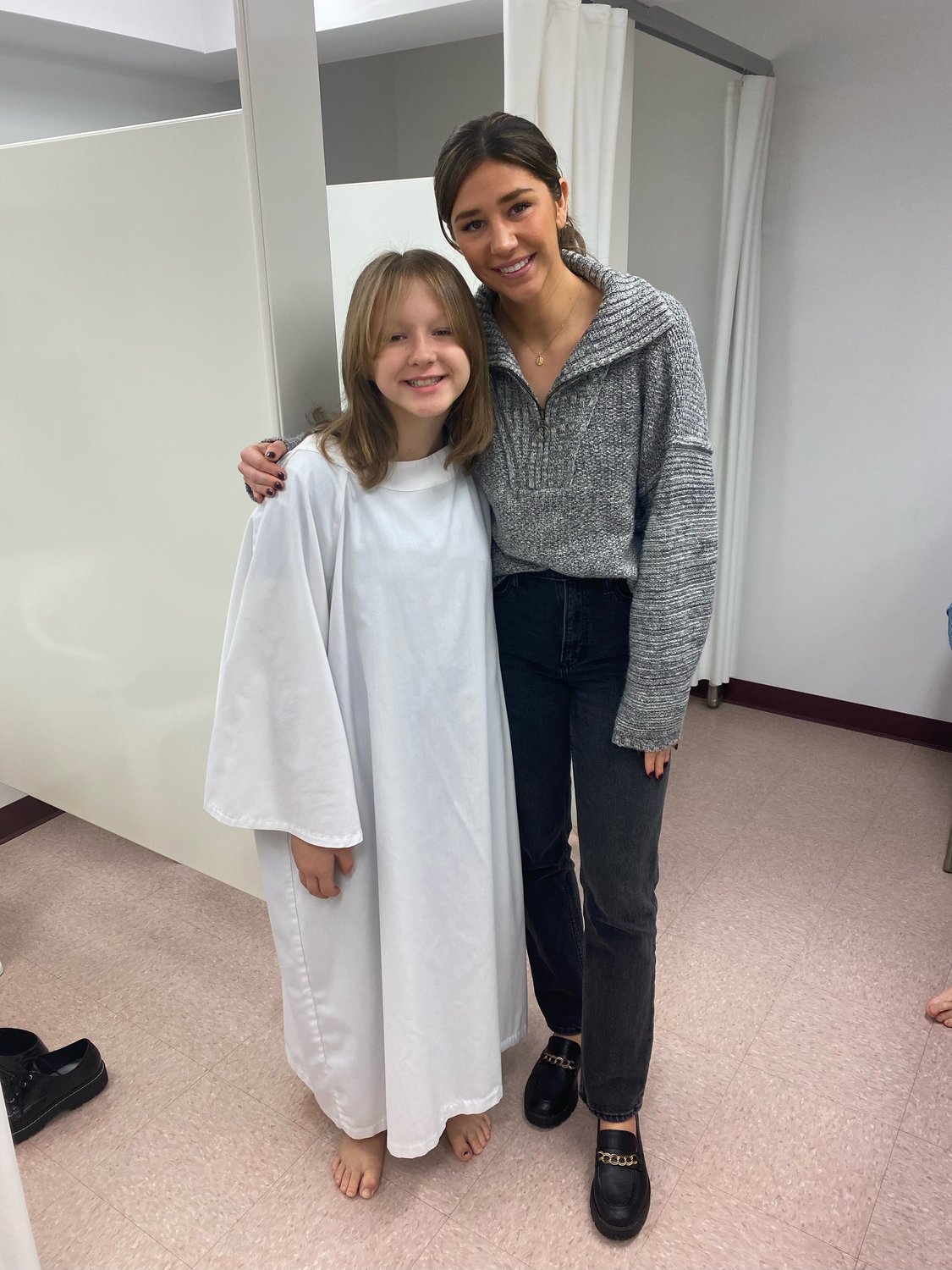 Lilly Chitwood, left, poses with her big sister, Anna. Lilly is the youngest and last of the Chitwood children to be baptized.
Previous Next
Posted Wednesday, December 7, 2022 7:05 pm
By ROGER ALFORD, The Christian Index

GLEN ALLEN, Va. – Paul Chitwood felt an overwhelming sense of gratitude when he stepped into the baptismal waters with his 10-year-old daughter Lilly, the youngest and last of his four children to accept Jesus as Savior.

“My prayer has always been that God would allow me to see each of my children come to Christ,” said Chitwood, president of the International Mission Board. “I felt that leading them to Him was my most important job as a father, and, once that job was complete, I would be content with whatever happened to me. I’m thankful that the Lord has answered that prayer.”

Lilly accepted Christ during a visit to Tennessee and followed that with baptism at the Chitwood’s family church, Staples Mill Road Baptist in Glen Allen, Va., in October.

Standing waist-deep in water, Chitwood couldn’t help but think back over the years to the hard times Lilly had faced during her early childhood, eventually being placed in foster care where she longed for a family of her own.

Lilly had gotten what she wanted in 2018 when a judge approved her adoption and declared her the newest member of the Chitwood family with Paul and Michelle, becoming her mom and dad; Daniel, her big brother, and Anna and Cai, her big sisters.

Four years later, Lilly has also been welcomed into the family of God. She was in Vacation Bible School in her Grandma Selma Herron’s church, Mt. Harmony Baptist in Knoxville, Tenn., when she prayed for salvation.

“I knew that was what I wanted and needed,” Lilly said. “I felt that all my sin that I’ve been carrying around like a weight on my shoulders dropped off. I was relieved.”

For the past year, Michelle said Lilly had been asking questions about what it would mean for her to follow Jesus. She, of course, had been exposed to the gospel daily since she joined the Chitwood family – and not just at home.

“We made sure that we were talking to her but also having her in places, activities, and among people who would be sharing the gospel with her,” Michelle said.

All that finally culminated in Paul and Lilly in the baptistry together.

Paul well remembers where Lilly had come from, but also the way the Lord intervened, giving Lilly not just a forever family but also setting her on a path toward salvation.

On the day  her adoption was finalized, Judge Derwin L. Webb handed Lilly the gavel, which she pounded on the judge’s bench and declared, “This adoption is final.”

That was a cherished moment for the Chitwoods who, as foster parents, had fallen in love with Lilly as soon as she arrived in their home.

“When we first got Lilly, we could tell that this 3-year-old had been in a very difficult situation,” Paul said.

Living with the Chitwoods was supposed to be temporary, perhaps a few months until her birthmother was able to get treatment and get her life back on track. That never happened.

“As soon as we found out that we could adopt Lilly, I knew we would move mountains to make her adoption happen,” Michelle said.

The Chitwoods said  having Lilly join their family, then also joining God's family has been an absolute blessing.

“Since Lilly is our fourth child, we've grown accustomed to having spiritual conversations with our children to help them be sensitive to the Lord's leading in their lives and trusting that He is always at work,” Paul said. “We never want to push them into a decision that isn't genuine but always want them to be listening for and to the Lord. Knowing that Lilly thinks deeply about things and knows her own mind, we found it easier to be patient and listen for her to express interest in spiritual things, always keeping the gospel in front of her.”

Paul, a former pastor and state convention executive director, said he and Michelle always made sure each of their children had opportunities to learn about the Lord by putting them in places where they were exposed to the gospel as they were growing up.

“We feel so blessed that Lilly has so many opportunities to be around wonderful people who are sharing Jesus with her,” Paul said. “From meetings with missionaries to the SBC annual meeting kids programs, to VBS, Sunday school, and worship, she hears the gospel almost daily and regularly spends time with members of our SBC family, church family, and IMB family.”

So, as Paul stepped into the baptistry with Lilly, he felt deep appreciation to all the people who helped lay a gospel foundation for her and especially to Jesus who gave Himself that Lilly, along the whole world, could be saved.

“As a pastor for many years, and now serving many years in Southern Baptist mission work, both jobs that are never ending, the most difficult part of my life has always been balancing the demands of ministry with my responsibilities as a husband and father. I have fallen short at times but I’m thankful for the grace of God and the grace of my family. We all want the world to hear the gospel but the world, for each of us, begins in our own homes and then we take it to the ends of the earth.”

Meanwhile, Lilly, like all kids her age, dreams about what she’ll do when she grows up. Becoming an actress or an animator are high on her list right now.

Perhaps, she said, she may even become a missionary so she can tell the world about Jesus.

“I believe it would be hard but fun,” she said. “Jesus is my savior, and I hope other people will follow him as I do.”