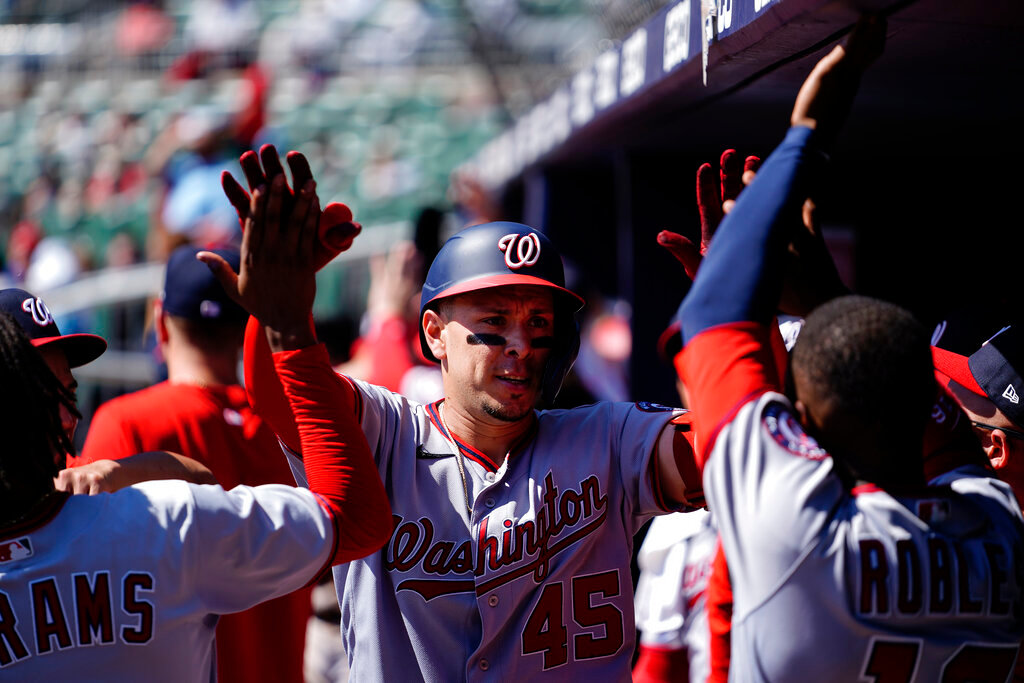 Washington Nationals' Joey Meneses (45) is greeted in the dugout after hitting a two-run home run in the seventh inning against the Atlanta Braves, Wednesday, Sept. 21, 2022, in Atlanta. (AP Photo/Brynn Anderson)
Posted Thursday, September 22, 2022 9:23 am
By GEORGE HENRY, Associated Press

A fifth straight postseason awaits the defending World Series champions, and the Atlanta manager knows the team can't afford to make mistakes on the basepaths.

Joey Meneses hit a go-ahead, two-run homer off Jesse Chavez in the seventh inning, and the Washington Nationals stopped the Braves’ five-game winning streak with a 3-2 victory on Wednesday as Atlanta cost itself with poor baserunning.

Ronald Acuña Jr. drove in an early run and scored another for Atlanta, which clinched a postseason appearance a night earlier.

Atlanta trailed by a run in the eighth when Michael Harris II hit a one-out single to right with Austin Riley on second and William Contreras on first. Third base coach Ron Washington held up Riley, who had rounded third, but Contreras was nearly at third and was thrown out returning to second by catcher Tres Barrera, who had received the throw from right fielder Lane Thomas.

“Wash was giving me a go the whole time and then at the last second put up the stop sign, and I think at that point Contreras was already there,” Riley said. “It’s tough. It happens.”

Snitker said the Braves held a meeting about baserunning on Tuesday to go over the intricacies of staying alert.

“It’s just when your playing close games, those are the things you can control,” Snitker said. “There’s so many things in this game you can’t control, but we can control our baserunning. It’s the awareness more than anything. We talk about it a lot. We show them different videos and different angles.

“Most of them are visual learners. We do that quite a bit.”

“I can’t say enough about what Joey has done for us since he’s been here," Nationals manager Dave Martinez said. “He’s been hitting balls, doubles, homers, getting on base, but today was all about the team. We came out with a victory."

Andrés Machado (2-0) pitched a scoreless sixth, Carl Edwards Jr. escaped a jam with a runners on first and third in the eighth when Eddie Rosario lined out and Kyle Finnegan pitched a perfect ninth for his 11th save in 15 chances.

Chavez (4-2) gave up one run and one in two-thirds of an inning.

Atlanta took advantage of Paolo Espino’s erratic throws to first base to make it 1-0 in the first. Acuña led off with a single, advanced to second on a throwing error by Espino on a pickoff attempt and scored when Contreras reached on an infield single and Espino threw wildly to first again.

Atlanta had won 11 of 12 against the Nationals and began the day 26-8 in the series since the start of last year.

Bryce Elder gave up one run with two walks and six strikeouts in 5 2/3 innings for the Braves.

“He went into the sixth and gave us a chance to win the game," Snitker said. “I thought he did a really good, solid job. He pitched around some different things, but it was solid, very solid."

Elder stranded a runner in scoring position in the third. He hit Josh Palacios with a pitch in the fifth, and Palacios advanced to third on Barrera’s single before Thomas’ sacrifice fly trimmed the lead to 2-1.