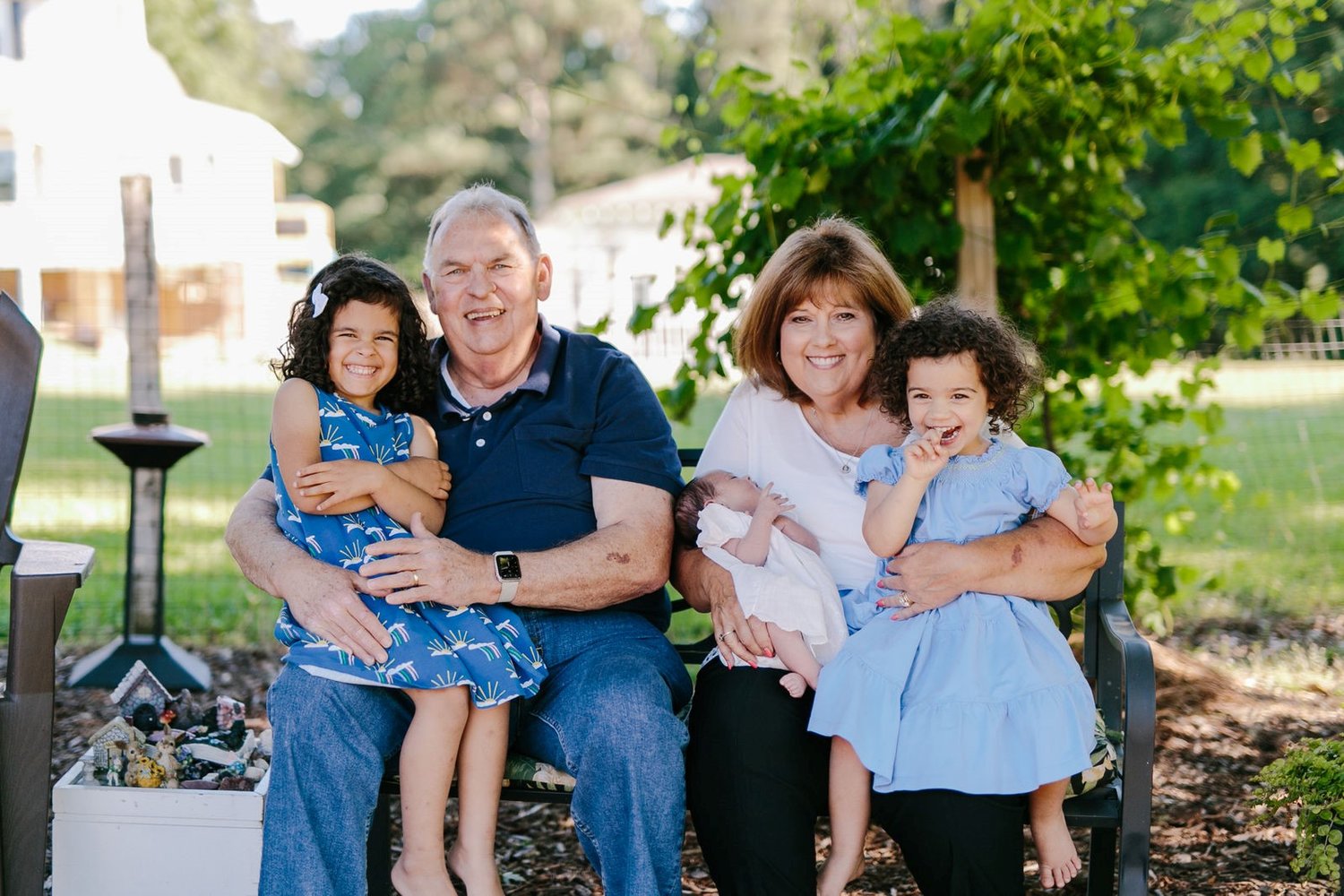 Mike and Myra Woods relish the joy of having visits from their granddaughters, left to right, Annie, Josephine and Lily.
Posted Monday, November 1, 2021 9:02 am
Gerald Harris

Mike and Myra Woods relish the joy of having visits from their granddaughters.  Here they are with, left to right, Annie, Josephine and Lily.

POWDER SPRINGS - Few Pastors have the grace and tenacity to remain as the pastor of a church for 40 years. Those who do should be noted as examples of steadfastness and faithfulness. Mike Woods, pastor of First Baptist Church in Powder Springs has reached that notable milestone in the Cobb County church he has served since 1981.

John McCallum, writing for Church Leaders, mentions some of the blessings of tenure. He noted, “I have time to teach ‘the whole counsel’ of God’s Word rather than just my hobby horse of the same 200 sermons over and over again at first one church and then the next. This forces me to read and study and stay fresh.”

McCallum continued, “I get to see the lost person come to faith in Christ for whom some in the church (including me) have been praying for years. I get to know my people over time and on deeper levels. I get to watch new Christians grow in their faith; and I get to witness older Christians mature in their faith.

“I get to see some of that Romans 8:28 ‘good’ that God works in the terrible things that happen to our people. Often, that ‘good’ doesn’t show up until years after the crisis.”  Obviously, there are multiple reasons why a long tenure is good for a pastor and a church.

When Pastor Woods was asked about being interviewed for an article, he explained that he was just a “plain vanilla’ kind of guy who was not very interesting. The interview proved otherwise. His life has been marked by many blessings, significant trials, much joy, effective ministry, and some hilarity along the way.

Pastor Mike Woods in the pulpit.

As a student at Southern Baptist Theological Seminary, Woods got a job selling ladies’ footwear at Byck’s Shoes on South 4th Street in Louisville. One day some ladies came in and were not pleased with the seminarian’s manner of speech, suggesting that he had mocked them and even insisted that he should be terminated. The manager inquired of Woods’ supervisor who explained, “Mike was not mocking those ladies. He’s from Georgia. That is just the way he talks.”

Woods grew up in Trion, Georgia, the denim capital of the world. He is a graduate of Shorter University and the aforementioned seminary in Louisville, Ky.  While at Shorter, Woods served as pastor of the Pleasant Grove Baptist Church in the Gore Community near Summerville.

As a seminary student he served as the Baptist pastor of the Union Grove Church in Bedford, a facility that accommodated a Baptist, a Christian and a Methodist congregation. After his first year at the seminary his money was depleted, and he returned to Trion and got a good job with a pool company and was called to be the interim pastor of the First Baptist Church, his home church. Upon returning to the seminary, he became the pastor of the Rockbridge Baptist Church in Willisburg, Ky.

After graduating from seminary Woods returned to Georgia and was called to be the pastor of First Baptist Church Chattahoochee seven miles west of downtown Atlanta where he served for four years.

When Woods was initially contacted by the Powder Springs First Baptist Church (PSFBC) he did not even respond, because he was convinced the church would not consider a pastor who was not married. However, there was a man from the Powder Springs church who saw and heard the Chattahoochee pastor speak at a funeral and declared, “There is the man who will become our pastor.”

Immediately thereafter he was contacted by the chairman of the search committee, and they began visiting the Chattahoochee church, were favorably impressed, and extended a call to Mike Woods to be their pastor.

There were people who wanted to play cupid to their pastor and help him find a wife. Donna Campbell, who was on the pulpit committee that recommended Woods to the church, recalled, “Many in the congregation prayed for a helpmate for Mike, and within two years he had met, fallen in love with, and married Myra Sanders, God’s perfect choice for Mike’s soulmate. Myra is his confidant, his jubilant supporter, his strength when he needs a hand, and his faithful worker to help accomplish God’s plan for our community.

“For 25 years, she led the church in the creation, organization and implementation of mission trips all over this country where people need to hear the Word of God and see His hands in action. She is a teacher of Scripture and discipleship classes; and is often quoted in other classes in our church. As Proverbs 31:26 says, ‘She opens her mouth with wisdom, and the teaching of kindness is in her tongue.’”

The Woods have two adult children Micah Joseph Wood and Mary Lynn Dalton, and the Daltons have given the Woods three granddaughters: Annie. Josephine, and Lily. Mike and Myra are discovering that grandchildren will provide unspeakable joy and gladness to human hearts.

In a similar fashion, the Powder Springs pastor has provided much joy to the people of his church family. George Roberts, 94-year-old retired military Colonel and six term deacon chairman, commented, “Mike Woods is a loving Christian minister, a kindhearted man with a sincere desire to help people, and an exceptional ability to relate to people. These qualities have made him a successful minister for 40 years at our church. He had also been a loving friend and supporter to me personally during my three terms as deacon chairman during his tenure as pastor.”

One of the highlights of Woods’ ministry at PSFBC was the enlargement of the sanctuary and the addition of office space and other enhancements. The worship center’s seating capacity was enlarged from 500 to 1,100 which according to the pastor “changed the tenor of the church”.

The church had no savings or building fund when the need to enlarge the sanctuary became apparent, so the church secured the services of Cargill Associates to assist in the fund-raising effort. The funds were provided, and the church has enjoyed the additional space for more the three decades.

Mike Woods and his trusted administrative assistant Wendy Jones work hard to meet the needs of the Powder Springs congregation.

Woods believes in doing things in a prayerful, thoughtful, methodical way. He stated, “I believe in long tenures. If something does not work out when you want it to, just put it in God’s hands and wait on Him.”

While God has richly blessed the ministry of Mike Woods at the Powder Springs church his tenure has not been without challenges. Some years ago, he had a season of depression that produced despondency and sadness. He admitted, “I still have occasional bouts of melancholy, but I have learned to cope. I have also tried to be as transparent as possible and never attempt to cover up problems or adversities.”

“I have what is called survivors’ guilt.” Survivor’s guilt has been defined as a condition that produces feelings of guilt because one has survived a life-threatening situation when others did not or when someone believes he could have done more to save the lives of others.”

Many sincere pastors can probably relate to the kind of depression that sets in when those for whom they have prayed and those to whom they have witnessed die without a saving knowledge of Christ.

At the same time Woods admitted that he gets great joy in going to the hospital on Saturdays to visit the sick. He explained, “Few people expect a visit from the pastor on Saturday and it is a blessing to know that you have encouraged someone by just walking in their room and praying for them. The greatest joy in ministry is knowing that you have helped somebody.”

During all his years at Powder Springs Woods has never terminated a staff member. He stated, “I believe that it is important to resolve personnel issues and work through problems. God redeems things when you demonstrate grace.”

Alan Davis, senior associate pastor of First Baptist, who has work with Woods for 39 of his forty years, stated, “Mike’s ministry has been a beacon of light and love for our city; and thousands of people have been impacted by his willingness to partner with others to carry the message of Christ to the world. Mike Woods is the finest pastor, mentor, husband, father, and grandfather I have ever known. He is my friend, and I will forever be thankful God gave me that wonderful blessing.”

Mark Perry, Associate Pastor in Music at the Powder Springs Church testified, “I have known Mike Woods since 1977 when I was in high school. Through the years he has consistently been a model of the grace, love, and humility of Christ, faithfully preaching and ‘rightly dividing’ the Word of God. His friendship and pastoring are cherished by all who know him.”

When asked how he managed to remain at the same church for 40 years, Woods replied, “I had the privilege of coming to a church that is loving, kind and forgiving.  I didn’t come to stay, and I didn’t come to go; and this is what has happened.”

And it couldn’t have happened to a finer pastor.