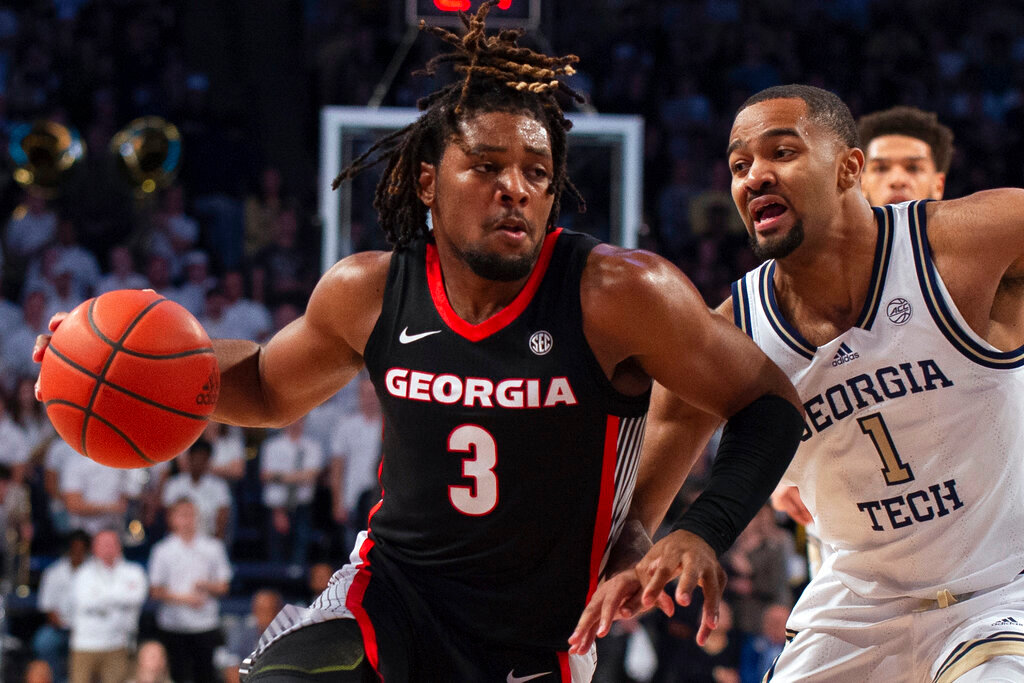 Kelly hit a long 3-pointer and then a drove for the game-winning floater with 23 seconds remaining as the Yellow Jackets rallied to beat Georgia 79-77 on Tuesday night.

Kelly hit the winning shot in similar fashion against Georgia State on Nov. 12. He did it again to beat the Bulldogs, finishing with a team-high 17 points after failing to score in the first half.

“I'm going to continue to keep shooting, no matter how many times I miss,” Kelly said.

Roberts missed a 3-pointer, turned the ball over twice with bad passes, and was called for an offensive foul as he was trying to drive for the basket that would've sent the game to overtime.

“A tough finish for us,” Georgia first-year coach Mike White said. “We were in position to steal one on the road.”

A pair of second-chance buckets seemingly put Georgia (7-3) in control with a 77-73 lead.

The Bulldogs wouldn't score again as Kelly led the comeback for the Yellow Jackets (6-3) — with a big assist from Roberts.

He had a chance to essentially seal it for the Bulldogs, but his jumper beyond the arc clanked off the rim.

Georgia Tech grabbed the rebound and raced down the court, where Kelly swished a 3 from well behind the stripe that brought Georgia Tech within a point with about a minute left.

Trying to work the ball inside, Roberts made an ill-advised entry pass that was deflected and stolen by Deivon Smith, setting up Kelly’s drive for the basket that put the Yellow Jackets back ahead,

Roberts tried a drive of his own, only to have it blocked by Jalon Moore. Georgia retained possession, but Roberts' inbounds pass was stolen by Moore, who was fouled and made one of two free throws.

Roberts took the ball again and hurriedly dribbled toward the basket, only to be called for an offensive foul when he sent Smith flying.

“Just sacrificing my body for the team,” Smith said.

Georgia stole an inbounds pass around midcourt, giving Karlo Oquendo one last shot to launch a 3 that still would've won it for the Bulldogs. It bounced off the rim.

The game was tight throughout. Neither team led by more than eight, and a sequence in the second half showed just how tightly these rivals were matched.

With both squads playing at a frenetic pace and showing little regard for defense, the lead changed hands on eight straight possessions as the teams traded baskets.

Stunningly, they combined to score on 19 straight possessions before Georgia's Matthew-Alexander Moncrieffe missed a pair of free throws with 5:17 remaining.

FIRING UP THE CROWD

Perhaps the biggest cheer of the night came when Georgia Tech football coach Brent Key addressed the crowd at halftime.

Key, who served as interim coach for the last eight games of the season, was introduced Monday as the full-time choice for job.

He fired up the fans by getting them to chant “To hell with Georgia” over and over again. When a smattering of Bulldogs fans responded with barks, Key smiled and egged on the Yellow Jackets crowd to drown them out.

He also declared Georgia Tech to be the “greatest school in the entire state, the entire country,” following up his vow the previous day to not back down from the defending national champion and top-ranked Bulldogs.

Georgia: This will be a tough one to swallow for Roberts, who led his team with 16 points and seven assists. The Bulldogs lost despite shooting 53.4% from the field.

Georgia Tech: Four players scored in double figures, and two others players finished with eight points. But it was Kelly, as usual, who had the ball in his hands at the end of a tight game.

Georgia: After a nearly two-week break, the Bulldogs return to Atlanta on Dec. 18 to face Notre Dame at State Farm Arena in the Holiday Hoopsgiving event.

Georgia Tech: Head to North Carolina on Saturday for the Atlantic Coast Conference opener against the struggling Tar Heels.

Memphis pastor prays for continued peace after video release
MEMPHIS, Tenn. (AP) — Members of Mt. Olive Cathedral Church in Memphis gathered for worship on Sunday, two days after Tyre Nichols’ parents spoke from the sanctuary and called for peace following the release of video showing their son's fatal beating at the hands of police. “We’ve had calm so far, which is what we have been praying for," Pastor Kenneth Thomas said before the service. "And, of course, we hope that continues.”