NATO calls Russia its 'most significant and direct threat' 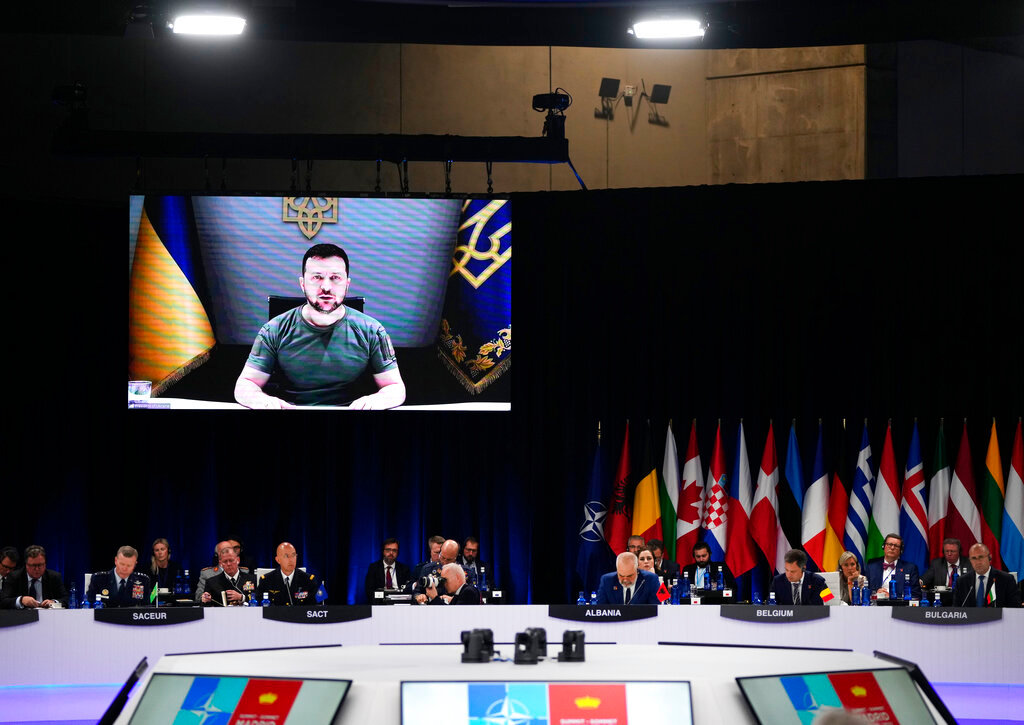 Ukraine's President Volodymyr Zelenskyy addresses leaders via a video screen during a round table meeting at a NATO summit in Madrid, Wednesday, June 29, 2022. (AP Photo/Manu Fernandez) 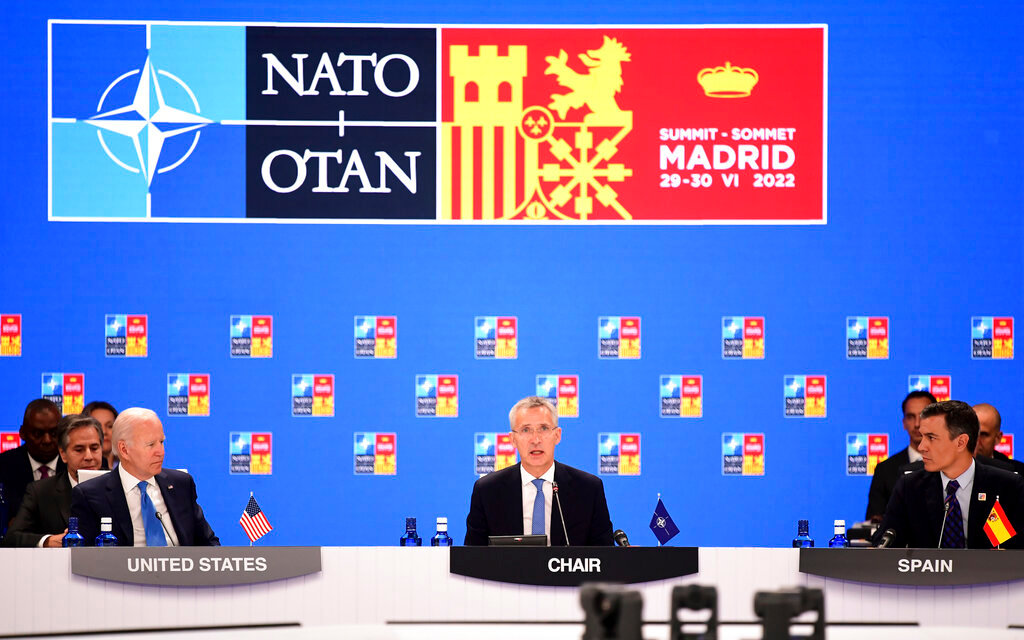 MADRID (AP) — NATO declared Russia the “most significant and direct threat” to its members’ peace and security, as the military alliance met Wednesday to confront what NATO’s chief called the biggest security crisis since World War II.

It also promised to “step up political and practical support” to Ukraine as it fights off Russia’s invasion.

Russia’s invasion of its neighbor shattered Europe’s peace, drove NATO to pour troops and weapons into eastern Europe on a scale not seen since the Cold War, and was set to give the defense organization two new members in Sweden and Finland.

“President (Vladimir) Putin’s war against Ukraine has shattered peace in Europe and has created the greatest security crisis in Europe since the Second World War," said Secretary-General Jens Stoltenberg.

The alliance promised to more support for Ukraine, which has already received billions in military and civilian aid from NATO countries. But Zelenskyy lamented that NATO's open-door policy to new members did not appear to apply to his country.

“The open-door policy of NATO shouldn’t resemble the old turnstiles on Kyiv’s subway, which stay open but close when you approach them until you pay,” Zelenskyy said by video link to the leaders of the 30 NATO nations meeting in Madrid. “Hasn’t Ukraine paid enough?"

He asked for more modern artillery systems and other weapons and warned the leaders that they either had to provide Ukraine with the help it needed to defeat Russia or “face a delayed war between Russia and yourself.”

“The question is who’s next? Moldova? Or the Baltics? Or Poland? The answer is: all of them," he said. "We are deterring Russia to prevent it from destroying us and from destroying you.”

Zelenskyy has acknowledged that NATO membership is a distant prospect. The alliance is trying to strike a delicate balance, letting its member-nations arm Ukraine without sparking a direct confrontation between NATO and nuclear-armed Russia.

Under NATO treaties, an attack on any member would be considered an attack on all and trigger a military response by the entire alliance.

Still, strains among NATO allies have also emerged as the cost of energy and other essential goods has skyrocketed, partly because of the the war and tough Western sanctions on Russia. There also are tensions over how the war will end and what, if any, concessions Ukraine should make to stop the fighting.

Money could also be a sensitive issue — just nine of NATO’s 30 members currently meet the organization’s target of spending 2% of gross domestic product on defense.

British Prime Minister Boris Johnson, whose country does hit the target, urged NATO allies “to dig deep to restore deterrence and ensure defense in the decade ahead.”

The war has already triggered a big increase in NATO’s forces in eastern Europe, and allies are expected to agree at the summit to boost the strength of the alliance’s rapid reaction force nearly eightfold, from 40,000 to 300,000 troops, by next year. The troops will be based in their home nations but dedicated to specific countries on NATO’s eastern flank, where the alliance plans to build up stocks of equipment and ammunition.

Stoltenberg said it was part of the “the biggest overhaul of our collective defense since the end of the Cold War.”

The leaders are also set to publish NATO’s new Strategic Concept, its once-a-decade set of priorities and goals.

The last such document, in 2010, called Russia a “strategic partner.” Now, the alliance is set to declare Moscow its No. 1 threat. The document will also set out NATO’s approach on issues from cybersecurity to climate change — and the growing economic and military reach of China.

Stoltenberg said China was not NATO’s adversary, but posed “challenges to our values, to our interest and to our security.”

The summit opened with one problem solved, after Turkey agreed Tuesday to lift its opposition to Sweden and Finland joining NATO. In response to the invasion, the two Nordic nations abandoned their long-held nonaligned status and applied to join NATO as protection against an increasingly aggressive and unpredictable Russia — which shares a long border with Finland.

After urgent top-level talks with leaders of the three countries, Stoltenberg said the impasse had been cleared.

Turkey hailed Tuesday’s agreement as a triumph, saying the Nordic nations had agreed to crack down on groups that Ankara deems national security threats, including the Kurdistan Workers’ Party, which is also considered a terrorist group by the U.S. and the EU, and its Syrian extension. It said they also agreed “not to impose embargo restrictions in the field of defense industry” on Turkey and to take “concrete steps on the extradition of terrorist criminals.”

Stoltenberg said leaders of the 30-nation alliance will issue a formal invitation Wednesday to the two countries. The decision has to be ratified by all individual nations, but he said he was “absolutely confident” Finland and Sweden would become members.

Stoltenberg said he expected the process to be finished “rather quickly,” but did not set a time on it.