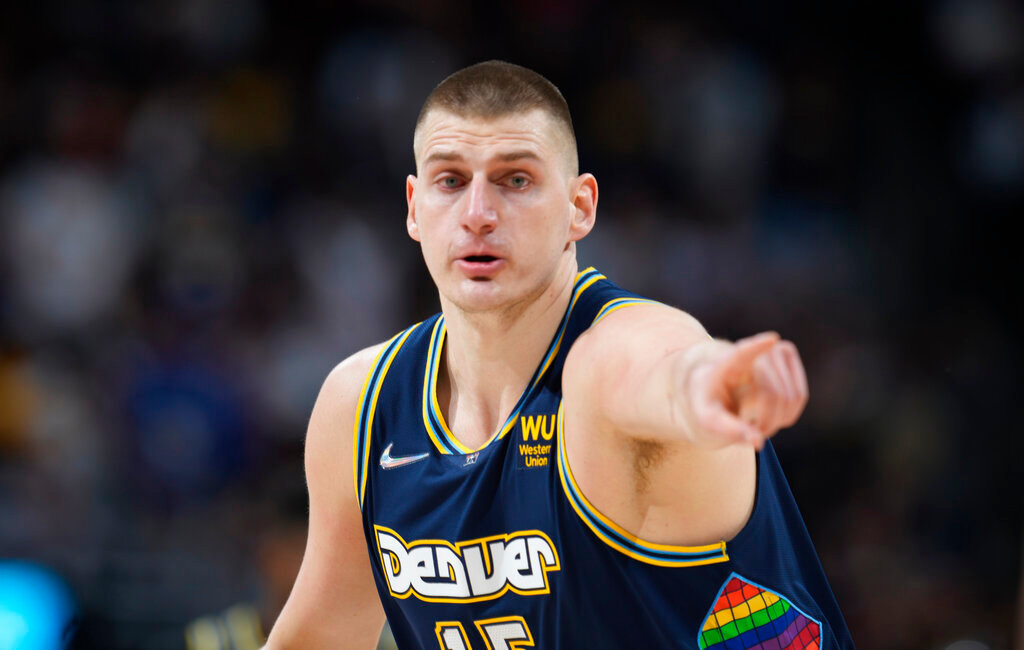 DENVER (AP) — To think, Nikola Jokic's entry into the NBA was once overshadowed by the introduction of the “quesarito.”

“Hopefully, I’m going to have some percentage from Taco Bell,” joked the Denver Nuggets' newly minted two-time MVP, whose name scrolled across the TV screen during the 2014 draft while the fast-food chain aired a commercial for its new product.

Much like the “quesarito” — a burrito wrapped in a quesadilla — the 7-footer is different. He has the vision of a point guard and a wide array of low-post moves. He has plenty of range, too.

The player nicknamed “Joker” is one of a kind. That's true right down to where he accepted his second straight MVP title — at his horse stable in Sombor, Serbia. He even rode to the barn on a two-wheeled cart pulled by his horse.

He was once the 41st pick, and taken while the Taco Bell commercial played. Not that he even knew that day.

“I was sleeping,” Jokic said Thursday in a Zoom call from Serbia.

“I think I put an example that you can do whatever you want to do, if you work hard or if you try hard,” Jokic said. “I think it’s really, really a nice journey. Hopefully, it’s not going to stop.”

The 27-year-old Jokic averaged 27.1 points, 13.8 rebounds and 7.9 assists on a team that was missing two max players in Jamal Murray (ACL) and Michael Porter Jr. (back). The versatile center elevated his game to become the first NBA player to eclipse 2,000 points, 1,000 rebounds and 500 assists in a season.

As the 13th player to win back-to-back NBA MVP titles, his name will be forever linked with the greats such as Michael Jordan, Magic Johnson, Moses Malone and Kareem Abdul-Jabbar. Jokic now has a chance at a three-peat, which would put him the same company with Larry Bird, Wilt Chamberlain and Bill Russell.

“I can’t compare myself to those guys,” Jokic said. "They did a lot and if you say those names anywhere in the world, they will know them. They did everything for the sport today. They were amazing. They won a lot of championships.

“But just to have my name be there, I think it’s really cool. Just one day someone’s going to say my name with those group of guys.”

In typical Jokic fashion, his celebration was far from elaborate: “Some music and some beer,” he said. “Pretty simple.”

Plenty of friends, family and members of the Nuggets joined him in Serbia, including coach Michael Malone and president of basketball operations Tim Connelly. Some — including him — wore shirts with a quote across the front: “Some people want to see you fail. Disappoint them.”

Jokic takes great pride in that sort of mantra, rising from a player whose game was once maligned — flopper, slow feet, poor defender — to what he is today.

Through all his fame, he remains a player of simple delights. Chief among them, his family.

“That’s my stress relief,” Jokic said of his time with his horses. “It keeps me calm and keeps me really, really relaxed. I really love to do that in my free time. I think that’s what I’m going to do when I finish my career.”

He will pair his new MVP trophy with his first one, which he found after it had been misplaced during a recent move.

But he's got his eye on an even bigger prize: An NBA title.

“All those individual awards are something that come and go. People are picking who's going to win it,” Jokic said. "Championships are you winning it."

Detention of WNBA's Griner in Moscow extended for 1 month