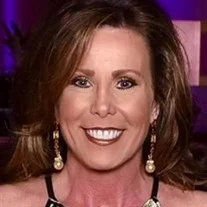 Angela Marie Camp, "Gigi," of Acworth, Georgia, entered heaven with Jesus on Saturday, September 17. She was born in Marietta, Georgia, on March 6, 1971, to Anthony and Linda Smith.

Angela was preceded in death by her mother, Linda Sue Douglas. She leaves behind her father, Anthony Smith (Vicki), her husband and the love of her life, David Camp, her two beautiful daughters, Lauren Taylor Wenzel (Spencer), Kaitlyn Marie Smith (Kevin), and two precious grandsons, Hudson and Austin, who were the joy of her life. She also leaves behind her siblings Allyson Manning (Brandon), Andrea Taylor (Kirby), Anthony Smith (Brooke), Kristine Spivey (Michael), and Stephen Adkins (Lindsay), and she leaves behind her precious nieces, nephews, cousins, aunts, and many extended family members and special friends who have felt the impact of her life.

She came into this world on a mission. Her first was to bring her daddy home from Vietnam early for her arrival, and that was only the beginning. Musically inclined, Angela played the piano and began singing at a very young age, and she learned how to play music in church. She and her sister, Allyson, sang together frequently, and eventually, her musical gifts were one part of what brought her together with her soulmate, David. At fourteen and eighteen years of age, this power couple began their journey, and despite difficult trials and situations - of which many were unknown to most - they created a beautiful life blessed by God. Spending time in ministry at the beginning of their marriage and in most recent years as the pastor's wife at West Cobb Church, Angela was a spiritual warrior and woman of faith who set an example for anyone who knew her.

While she worked in real estate and was extremely successful, her greatest achievement was becoming a mother to her girls, Taylor and Kaitlyn. She poured into them and loved them with a matchless love that is leaving a beautiful legacy for generations to come.

Angela was also known for her gift of hospitality, style, giving, and spiritual discernment. She knew how to make all things beautiful and made every holiday and event one to remember. Angela gave freely to others and wanted those she cared about to have what they needed. And God gave her the ability to spiritually discern situations and people; those close to her know that if she offered advice, it was a privilege to hear her insight and know that it was in their best interest to listen.

We are grieving but not like those who have no hope. We absolutely know and believe she is in the presence of Jesus and her loved ones, and we will see her again.

Please join us as we celebrate the life of this amazing woman, wife, daughter, sister, mother, Gigi, aunt, niece, cousin, and friend who leaves a void for all who knew and loved her.

Funeral Services will be held at 1:00 pm on Friday, September 23, 2022 at West Cobb Church in Marietta. Interment will follow at Kennesaw Memorial Park.

In lieu of flowers, donations may be made in Angela Camp's memory to West Cobb Church at https://westcobbchurch.com/give.

Resolutions may now be submitted for the 200th Georgia Baptist Convention