'When you come to Jesus with all your needs, He comes to you with all His promises' 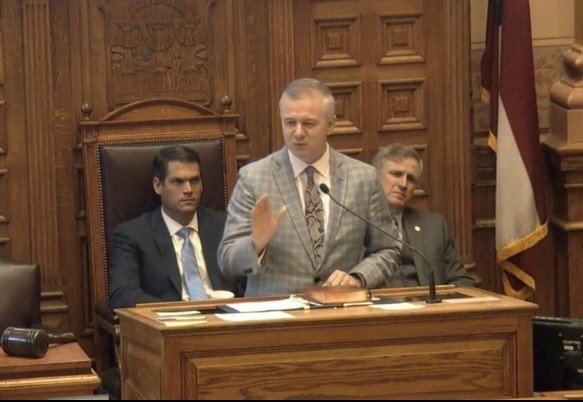 ATLANTA, Ga. – Pastor Josh Saefkow stood at the front of the Senate chamber earlier this week, leading a time of devotion that he concluded by declaring Jesus as King of Kings.

“You can crown Him or you can curse Him,” the easy-going Georgia Baptist preacher said in the soothing tones that have made him one of the state’s most-esteemed church leaders. “You can receive Him or you can reject Him. But the one thing you cannot do is ignore Him.”

The Senate broke into applause.

Saefkow, 37, isn’t an attention seeker, but he certainly has gotten his share in recent years because he made the decision to take public stands on matters of biblical importance.

He’s become a frequent visitor to the state Capitol. He has appeared on national television and has been quoted in national newspapers.

It all traces back to 2017, when Saefkow, pastor of Flat Creek Baptist Church in Fayetteville, attended a Georgia Baptist Mission Board training session that explained not only how to engage in the political process but why to engage.

It was lifechanging, Saefkow said, because he realized just how apathetic he had been toward politics.

“I fell under great conviction about that,” he said. “I had not been involved in the public square at all. I realized that, as a Christian, I wasn’t doing what the Lord expected of me. So, I repented of that.”

Then, Saefkow said, he offered a simple prayer: “Lord, make me useable.”

Since then, the Lord has opened door after door for Saefkow, including for sharing devotionals and leading lawmakers in prayer at the state Capitol.

State Sen. Marty Harbin said Saefkow is “very encouraging” but at the same time has the grit to “speak truth.”

Mike Griffin, the Mission Board’s public affairs representative, challenges church leaders in the public affairs training events to be “salt and light” in the world. He said Saefkow is a great example of what that means.

“I started taking a stand where the Bible takes a stand,” Saefkow said. “It was as simple as that. Because I was willing to take that step of obedience, it ended up leading to all these places.”

Saefkow said he hasn’t pushed doors open but instead has left that to the Lord.

“I just try to be faithful,” he said. “To me, it’s really unbelievable, almost laughable, what God has done.”

As he told lawmakers on Thursday, “When you come to Jesus with all your needs, He comes to you with all His promises.”

Sharing Christ with others takes planning and intentionality