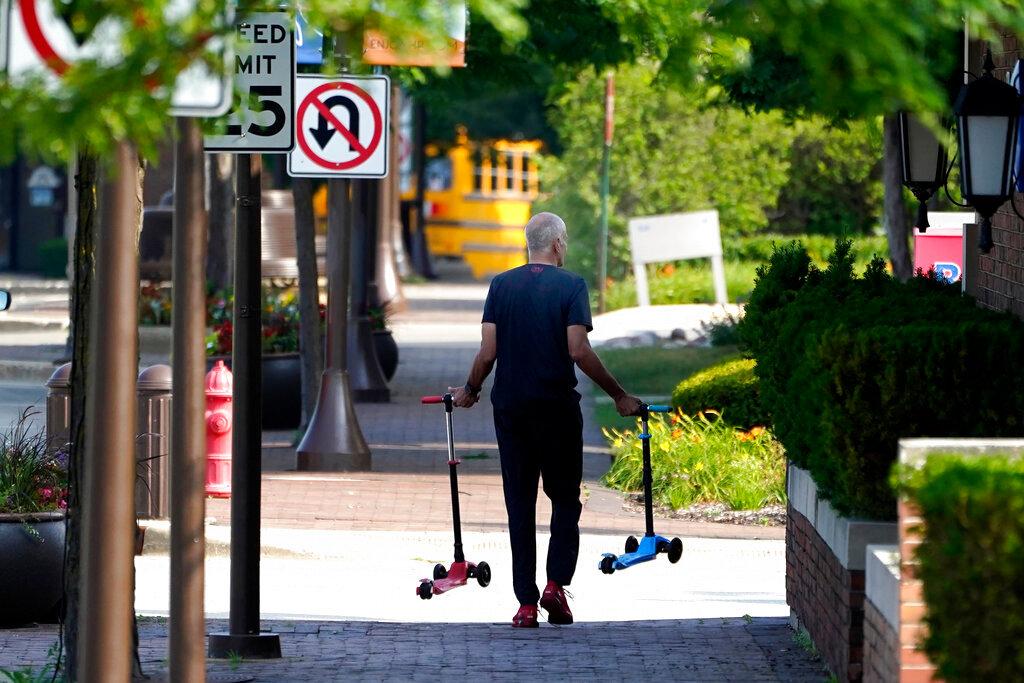 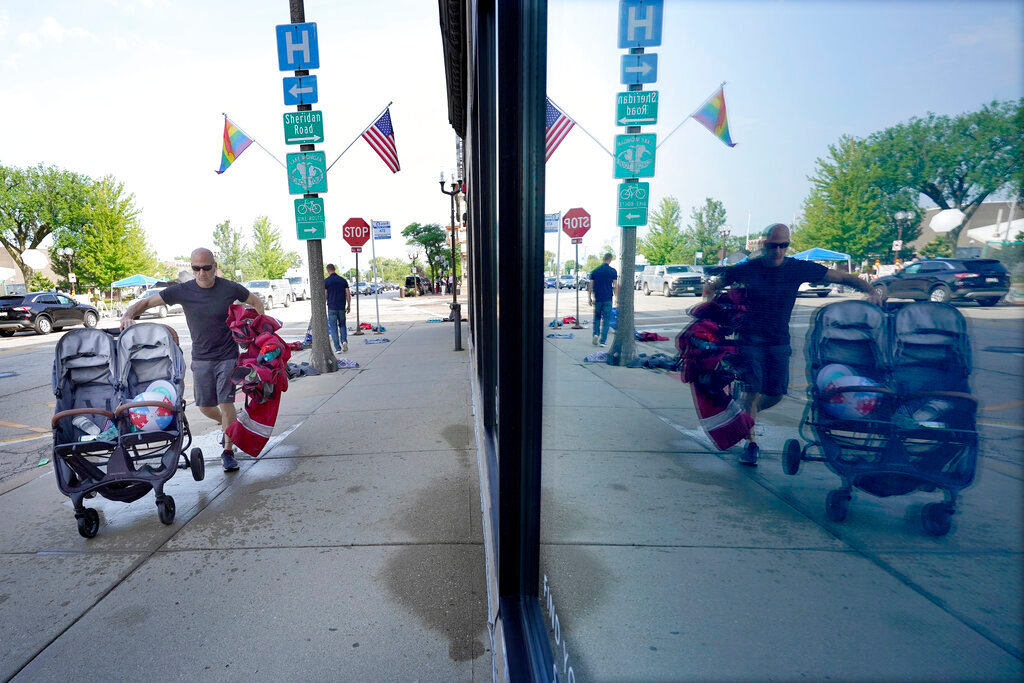 Highland Park, Ill., resident Murry Rosenbush is reflected in a store window as he removes items left behind by attendees to the town's Fourth of July parade Tuesday, July 5, 2022. (AP Photo/Charles Rex Arbogast) 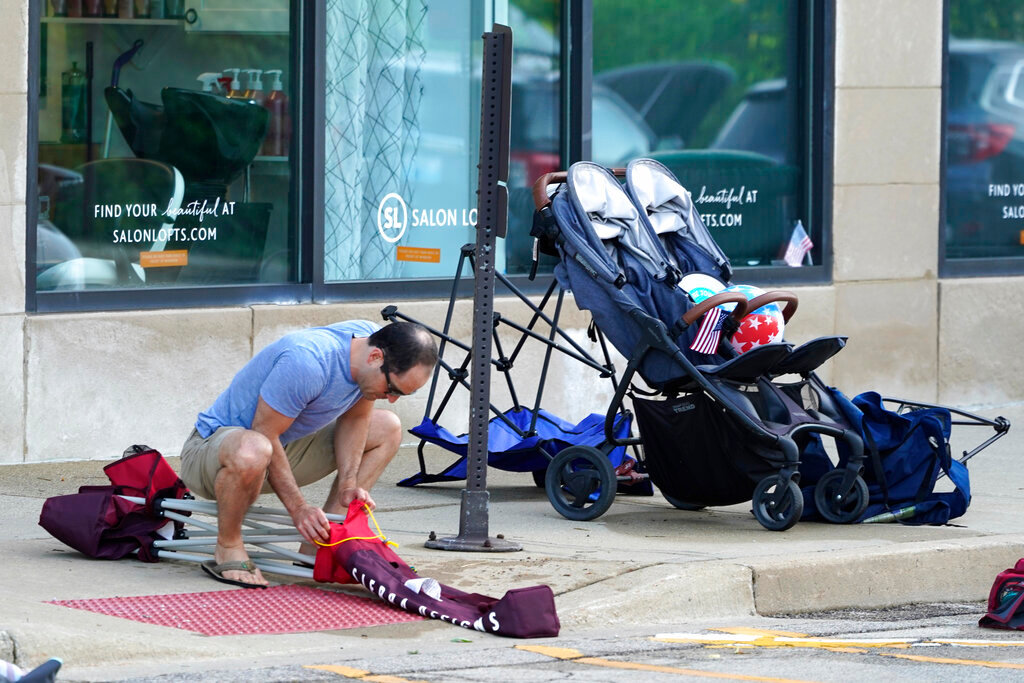 HIGHLAND PARK, Ill. (AP) — The gunman who attacked an Independence Day parade in suburban Chicago fired more than 70 rounds with an AR-15-style gun and killed at least six people, then evaded initial capture by dressing as a woman and blending into the fleeing crowd, police said Tuesday.

Lake County Major Crime Task Force spokesman Christopher Covelli told a news conference that the suspected shooter, who was arrested late Monday, fired a high-powered rifle “similar to an AR-15" from atop a commercial building into a crowd that had gathered for a parade in Highland Park, a close-knit community on the shores of Lake Michigan that has long drawn the rich and sometimes famous. More than 30 people were also wounded.

Investigators who have interrogated the suspect and reviewed his social media posts have not determined a motive for the attack, Covelli said.

They have also not found any indication that the shooter targeted anyone by race, religion or other protected status.

Authorities have not filed criminal charges.

Earlier in the day, FBI agents peeked into trash cans and under picnic blankets as they searched for more evidence at the site where the assailant opened fire.

The shots were initially mistaken for fireworks before hundreds of panicked revelers fled in terror in Highland Park, a close-knit community on the shores of Lake Michigan that has long drawn the rich and sometimes famous.

A day later, baby strollers, lawn chairs and other items left behind by panicked parade goers remained inside a wide police perimeter. Outside the police tape, some residents drove up to collect blankets and chairs they abandoned.

The shooting occurred at a spot on the parade route where many residents had staked out prime viewing points early in the day for the annual celebration.

Among them was Nicolas Toledo, who was visiting his family in Illinois from Mexico. He was shot and died at the scene, his granddaughter, Xochil Toledo, told the Chicago Sun-Times. Also killed was Jacki Sundheim, a lifelong congregant and “beloved” staff member at nearby North Shore Congregation Israel, which announced her death on its website.

Highland Park Police Chief Lou Jogmen said a police officer pulled over a suspect about 5 miles  north of the shooting scene, several hours after police released the man's photo and warned that he was likely armed and dangerous.

Lake County Coroner Jennifer Banek said the five people killed at the parade were adults, but didn’t have information on the sixth.

Police have not released details about the victims, but Toledo’s granddaughter told the Sun-Times that Toledo had spent most of his life in Morelos, Mexico. Xochil Toledo said she remembers looking over at her grandfather, who was in his late 70s, as a band passed them.

“He was so happy,” she said. “Happy to be living in the moment.”

Xochil Toledo said her father tried to shield her grandfather and was shot in the arm; her boyfriend also was shot in the back and taken by someone to nearby hospital because they weren’t sure there would be enough ambulances for all the victims.

Sundheim had spent decades on the staff at North Shore Congregation Israel, early on teaching at the congregation’s preschool and later serving as Events and B’nei Mitzvah Coordinator, “all of this with tireless dedication,” the congregation said in its statement announcing her death.

“Jacki’s work, kindness and warmth touched us all,” the statement said.

NorthShore University Health Center received 26 patients after the attack. All but one had gunshot wounds, said Dr. Brigham Temple, medical director of emergency preparedness. Their ages ranged from 8 to 85, and Temple estimated that four or five were children.

Highland Park Police Commander Chris O’Neill said the gunman apparently fired from a rooftop where he was “very difficult to see.” He said the rifle was recovered at the scene. Police also found a ladder attached to the building.

Covelli said the suspect legally purchased the gun in Illinois within the past year.

Gina Troiani and her 5-year-old son were lined up with his daycare class ready to walk onto the parade route when she heard a loud sound that she believed was fireworks — until she heard people yell about a shooter.

“We just start running in the opposite direction,” she told The Associated Press. “There were people that got separated from their families, looking for them. Others just dropped their wagons, grabbed their kids and started running.”