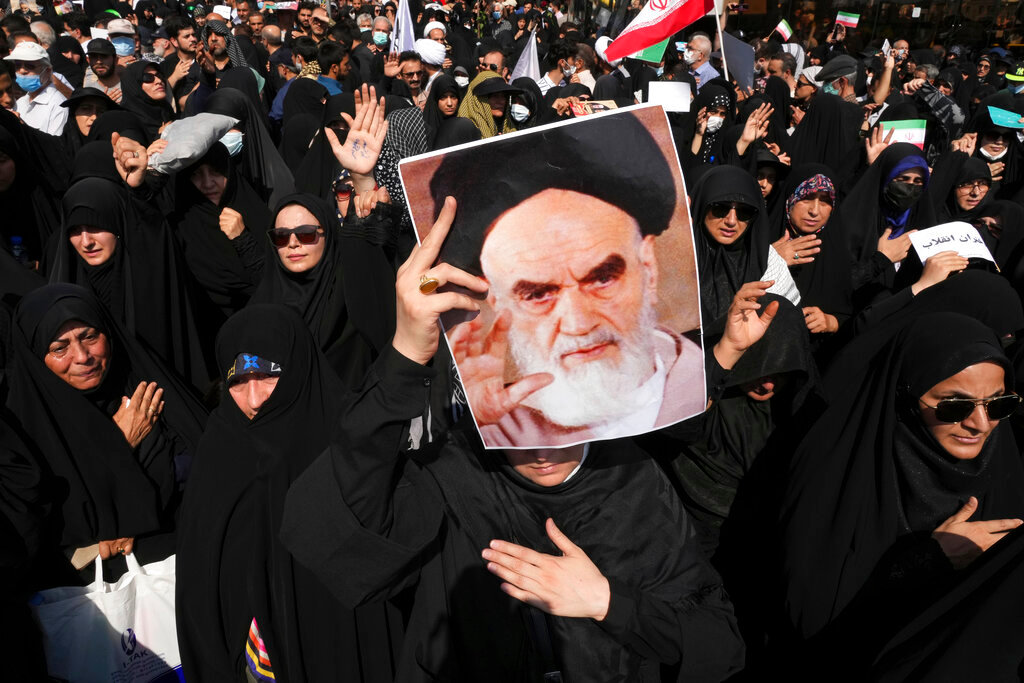 A pro-government demonstrator holds a poster of the late Iranian revolutionary founder Ayatollah Khomeini while attending a rally after the Friday prayers to condemn recent anti-government protests over the death of a young woman in police custody, in Tehran, Iran, Friday, Sept. 23, 2022. (AP Photo/Vahid Salemi) 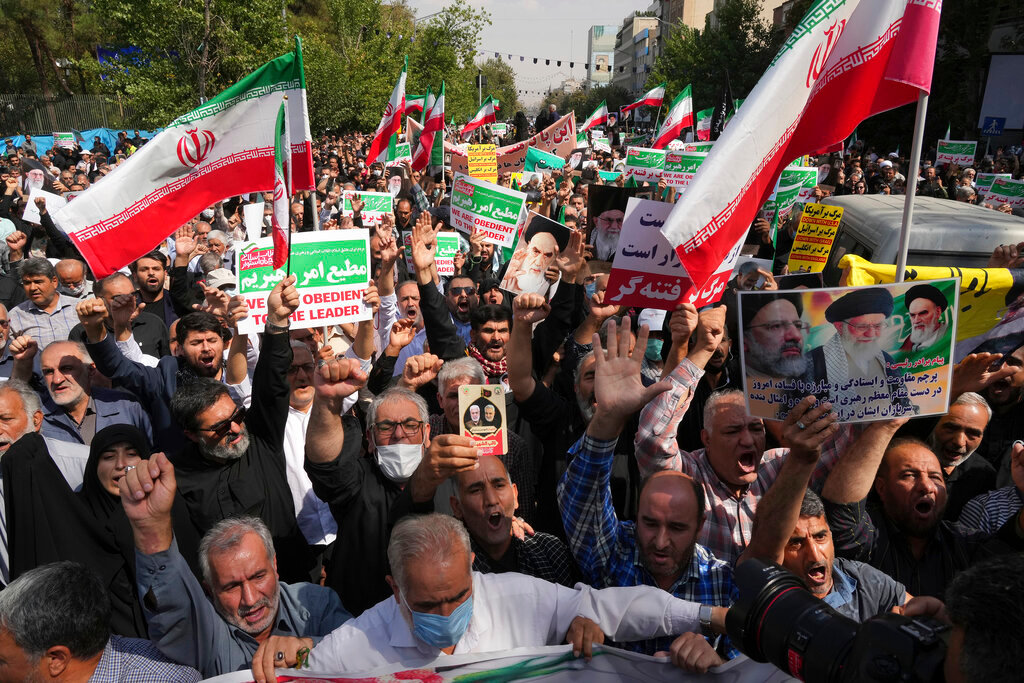 Iranian pro-government demonstrators attend a rally after their Friday prayers to condemn recent anti-government protests over the death of a young woman in police custody, in Tehran, Iran, Friday, Sept. 23, 2022. (AP Photo/Vahid Salemi) 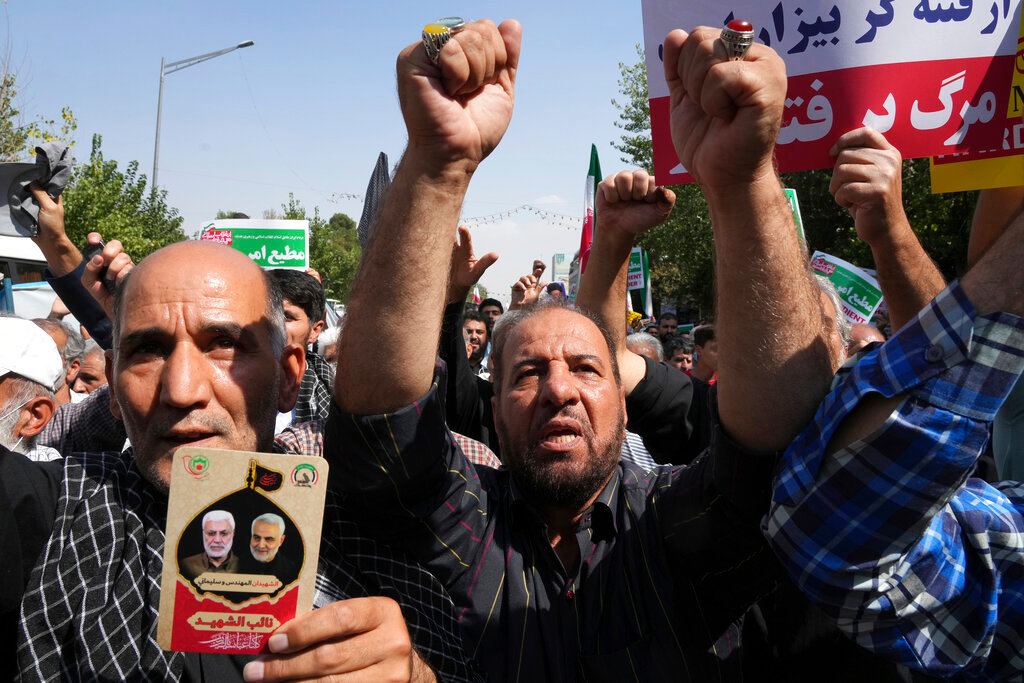 Iranian pro-government demonstrators chant slogans while attending a rally after their Friday prayers to condemn recent anti-government protests over the death of a young woman in police custody, in Tehran, Iran, Friday, Sept. 23, 2022. (AP Photo/Vahid Salemi)
Previous Next
Posted Friday, September 23, 2022 9:36 am
By The Associated Press

Iranian counterprotesters gathered across the country on Friday in a show of support for authorities after nearly a week of anti-government protests and unrest over the death of a young woman who was being held by the morality police.

A few thousand people attended a rally in the capital, Tehran, where they waved Iranian flags, and similar demonstrations were held in other cities. The government claimed the demonstrations of support were spontaneous. Similar rallies have been held during past periods of widespread protests.

The pro-government demonstrators chanted against America and Israel, according to state media, reflecting the official line that foreign countries are fomenting the latest unrest.

State TV, meanwhile, suggested the death toll from this week's unrest could be as high as 26. Anti-government protesters and security forces have clashed in several major cities in the most severe political unrest since 2019, when rights groups say hundreds were killed amid demonstrations against a hike in state-controlled gasoline prices.

A state TV anchor said late Thursday that 26 protesters and policemen had been killed since the protests erupted last Saturday after the funeral of 22-year-old Mahsa Amini, without elaborating on how authorities reached that figure. He said official statistics would be released later, but during past periods of unrest authorities have not provided a full accounting of deaths and injuries.

A tally by The Associated Press, based on statements from state-run and semiofficial media, shows that at least 11 people have been killed. Most recently, the deputy governor of Qazvin, Abolhasan Kabiri, said that a citizen and paramilitary officer had been killed in unrest that rocked two cities in the northwestern province.

The crisis unfolding in Iran began as a public outpouring of anger over the death of Amini, a young woman who was arrested by the morality police in Tehran last week for allegedly wearing her Islamic headscarf too loosely. The police said she died of a heart attack and was not mistreated, but her family has cast doubt on that account.

Amini's death has sparked sharp condemnation from Western countries and the United Nations, and touched a national nerve. Hundreds of Iranians across at least 13 cities from the capital, Tehran, to Amini's northwest Kurdish hometown of Saqez, have poured into the streets, voicing pent-up anger over social and political repression. Authorities have alleged that unnamed foreign countries and opposition groups are trying to foment unrest.

“The death has tapped into broader antigovernment sentiment in the Islamic Republic and especially the frustration of women,” wrote political risk firm Eurasia Group, noting that Iran’s hard-liners have intensified their crackdown on women’s clothing over the past year since former judiciary chief Ebrahim Raisi became president.

“The prospect of the leadership offering concessions to Iranian women is minimal,” it said. “In the cold calculus of Iranian leaders, the protests have likely gone far enough and a more forceful response is required to quell the unrest.”

Videos on social media show protesters in Tehran torching a police car and confronting officers at close range. Elsewhere in the capital, videos show gunfire sounding out as protesters bolt from riot police, shouting: “They are shooting at people! Oh my God, they're killing people!”

In the northwestern city of Neyshabur, protesters cheered over an overturned police car. Footage from Tehran and Mashhad shows women waving their obligatory headscarves, known as hijab, in the air like flags while chanting, “Freedom!"

The scenes of women cutting their hair and burning their hijabs feed into a broader political debate over the role of religious strictures in a modern-day republic — questions that have plagued the Islamic Republic since its founding in 1979.

But the protests have also grown into an open challenge to the government. The chants have been scathing, with some chanting “Death to the dictator!” and “Mullahs must be gone!”

Iran's intelligence ministry warned citizens against joining the “illegal” street rallies on Thursday, threatening prosecution. Local officials have announced the arrest of dozens of protesters. Hasan Hosseinpour, deputy police chief in the northern Gilan province, reported 211 people detained there on Thursday. The government of the western Hamadan province said 58 demonstrators had been arrested.

Tehran University announced that it would move classes online for the next week amid the unrest, the semiofficial Fars news agency reported.

Iran has grappled with waves of protests in the recent past, mainly over a long-running economic crisis exacerbated by American sanctions linked to its nuclear program. In November 2019, the country saw the deadliest violence since the 1979 Islamic Revolution, as protests erupted over gas price hikes.

From the mission field: Prolonged drought brings famine, death and fear to Somalia