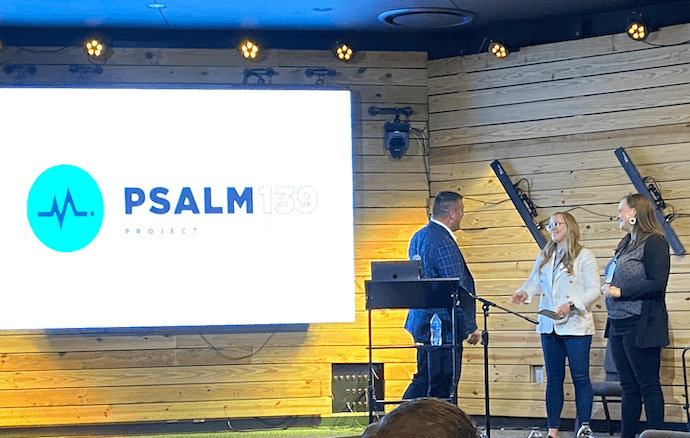 The SBTC grant was made to the Psalm 139 Project, a ministry of the Ethics & Religious Liberty Commission (ERLC) that provides ultrasound technology to pregnancy centers and trains staff members in its use. The donation will cover the placement of the six machines, as well as staff training. Locations for three of the machines already have been selected, according to the ERLC.

Including the three pregnancy resource centers already chosen in Texas, the ERLC has now placed or committed to centers to place 36 ultrasound machines toward its goal of 50 placements between December 2020 and January 2023. The 50th anniversary of the Supreme Court’s Roe v. Wade decision that legalized abortion throughout the United States will be Jan. 22 of next year.

A Texas law that prohibits the abortion of an unborn child whose heartbeat can be detected went into effect Sept. 1 of last year. By definition, the Texas Heartbeat Act (S.B. 8) bans abortions as early as five to six weeks into pregnancy. Pregnancy resource centers in the state have reported a dramatic increase in the number of clients since the law became effective, including a center in the Dallas-Fort Worth Metroplex that experienced a 48 percent surge from the previous year, according to the Southern Baptist Texan, the SBTC’s official magazine.

Rachel Wiles, the ERLC’s director of Psalm 139 placement, told Baptist Press, “We are so grateful for this partnership with the SBTC and know the Lord will use these funds to save lives.

“The ERLC continually seeks to save lives and serve mothers, especially in partnership with pro-life clinics,” Wiles said in written comments. “Since the passing of S.B. 8, the Psalm 139 Project has been contacted by several Texas pregnancy centers requesting updated ultrasound machines. Improved technology in newer machines provides much earlier heartbeat detection and allows a woman to see the growing life inside her.”

Tony Wolfe, the SBTC’s associate executive director, described the presentation to the Psalm 139 Project as “one of many examples of the SBTC’s commitment to supporting pro-life initiatives in our state. Through cooperation with the ERLC and other pro-life organizations, SBTC churches are consistently working to make abortion not only illegal in our lifetime, but unthinkable and unnecessary as well.”

Nathan Lorick, the SBTC’s executive director, presented the gift Tuesday to Elizabeth Graham, the ERLC’s vice president of operations and life initiatives. The presentation occurred during a private gathering for Texas pastors and ministry leaders hosted by the ERLC at Northeast Houston Baptist Church.

Wolfe urged churches to prepare for what could soon be a post-Roe America. The U.S. Supreme Court is expected to issue an opinion in the next several weeks in the Dobbs v. Jackson Women’s Health Organization case, which regards a Mississippi ban on abortion after 15 weeks’ gestation.

In early May, Politico published a leaked Supreme Court draft opinion that, if it becomes final, would strike down the 1973 Roe decision. Four other members of the high court have joined Associate Justice Samuel Alito, who wrote the draft opinion, in support of reversing Roe, according to Politico. If a majority of the Supreme Court follows through in its final opinion by overturning Roe and the 1992 Planned Parenthood v. Casey ruling that affirmed its 1973 decision, the action would return abortion policy to the states. About half of the 50 states will have laws prohibiting abortion or restricting it at some stage if Roe is overturned.

With what could be Roe’s reversal near, “churches need to be more involved now than ever in ministering to families in the pro-life space,” Wolfe said. “Yesterday’s grant is intended to spur along this conversation and effort across the Lone Star State and, prayerfully, the nation.

“A grant from a network of 2,704 churches can make a large, brief splash in the movement, but the rushing waters of a culture of life will only flow as preborn children are protected and expecting parents are cared for every day, one at a time,” he said. “The local, everyday ministry of churches is where the pro-life movement matters most.

“We encourage church leaders everywhere to strategize and take immediate action toward real-time, first-world ministry to champion, protect and serve vulnerable image bearers of God from womb to tomb.”

Ultrasound technology has proved to be a vital tool for pregnancy resource centers in their ministry to abortion-minded women. The sonogram images of their unborn children have helped many women choose to give birth.

Since 2004, the Psalm 139 Project has helped place ultrasound equipment at centers in 16 states. In September 2021, the project made its first international placement in Northern Ireland.

Pastor's wife: 'So many have lost so much'