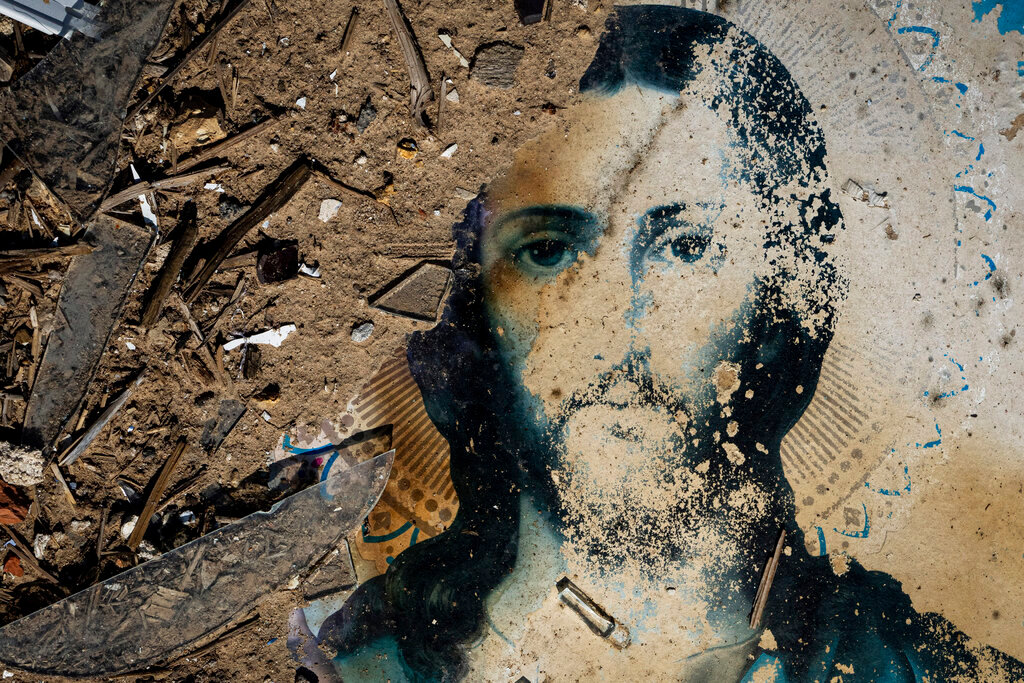 An icon lies in the debris of a church that was destroyed after a Russian attack at the frontline in Mykolaiv region, Ukraine, Monday, Aug. 8, 2022. (AP Photo/Evgeniy Maloletka) 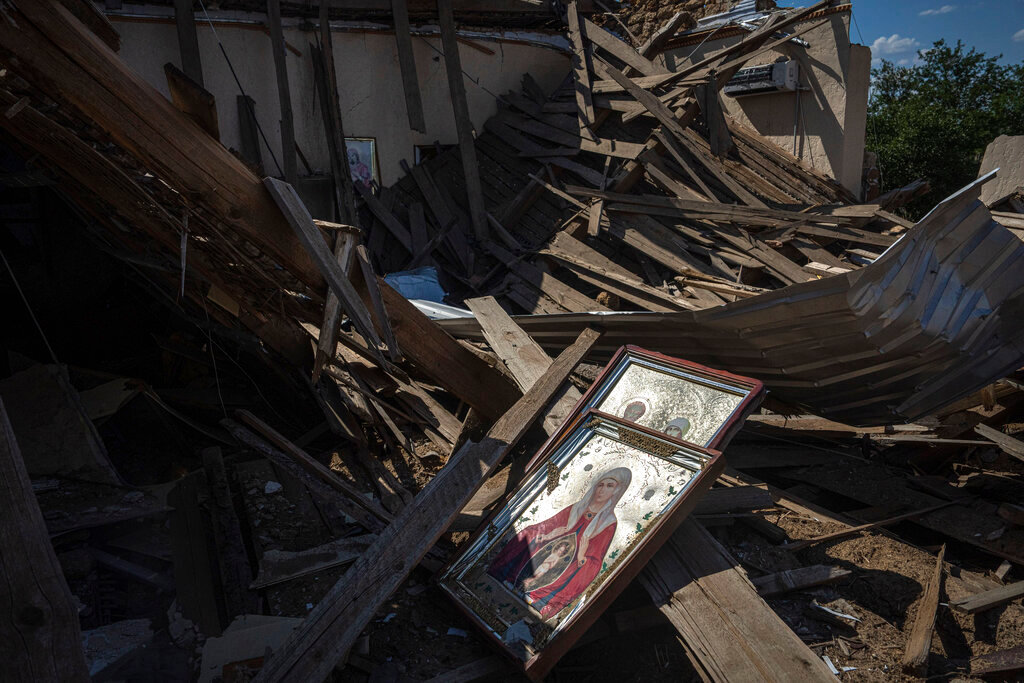 Icons lay on the debris of a church that was destroyed after a Russian attack at the frontline in Mykolaiv region, Ukraine, Monday, Aug. 8, 2022. (AP Photo/Evgeniy Maloletka) 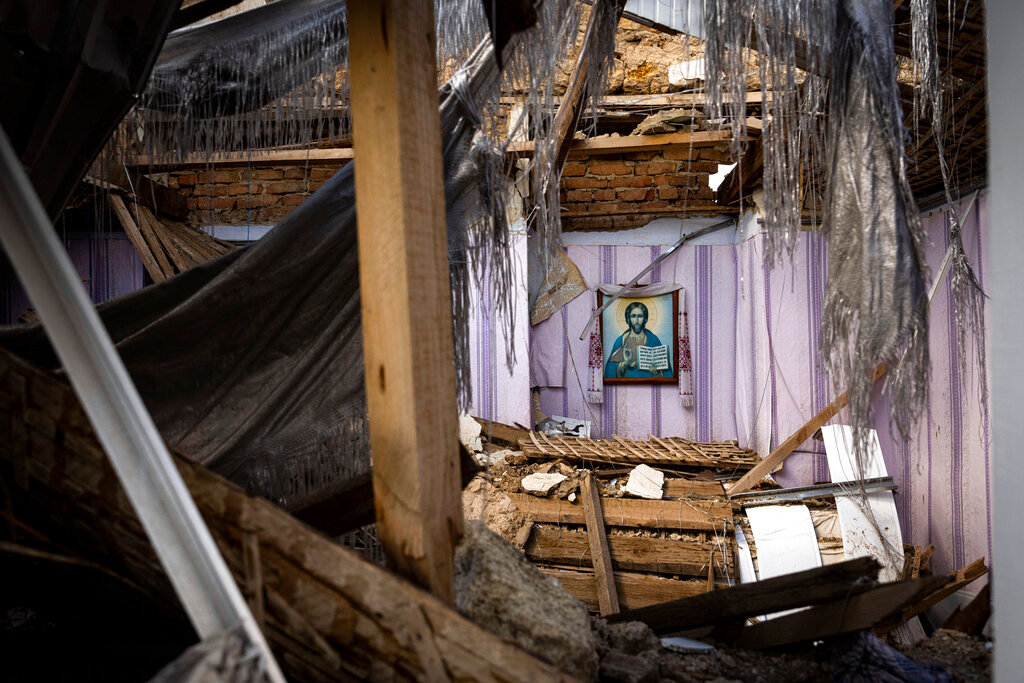 A religious icon is seen from the window of a church that was destroyed after a Russian attack at the frontline in Mykolaiv region, Ukraine, Monday, Aug. 8, 2022. (AP Photo/Evgeniy Maloletka)
Previous Next
Posted Tuesday, August 9, 2022 10:06 am
By SUSIE BLANN, Associated Press

KYIV, Ukraine (AP) — At least three Ukrainian civilians were killed and 23 others wounded by Russian shelling in 24 hours, including an attack not far from a Russian-occupied nuclear power plant, the office of Ukraine's president reported Tuesday.

The Russians fired over 120 rockets from Grad multiple rocket launchers at the southern town of Nikopol, which is across the Dnieper River from the Zaporizhzhia Nuclear Power Plant, Dnipropetrovsk Gov. Valentyn Reznichenko said. Several apartment buildings and industrial facilities were damaged, he said.

Ukraine and Russia accused each other in recent days of shelling the nuclear plant, which is the largest one in Europe, and increasing the risks of a nuclear accident.

In his nightly video address, Ukrainian President Volodymyr Zelenskyy invoked the 1986 disaster at the Chernobyl nuclear plant in Ukraine, which at the time was a Soviet republic. He called for new sanctions against Russia “for creating the threat” of another nuclear disaster.

“We are actively informing the world about Russian nuclear blackmail — about the shelling and mining of the Zaporizhzhia NPP facilities," Zelenskyy said. "Russia will not pay attention to words and concerns ... The Chernobyl disaster is an explosion in one reactor; the Zaporizhzhia NPP is six power units.”

The Kremlin claimed Monday that Ukraine's military was attacking the plant and urged Western powers to force Kyiv to stop the activity.

A Russian-installed official in the partially occupied Zaporizhzhia region said an air defense system at the plant would be reinforced in the aftermath of last week's shelling. Evgeny Balitsky, the head of the Kremlin-backed administration, told Russian state TV Tuesday that power lines and damaged blocks of the plant were restored.

“The plant is operating normally, but, of course, with an increased degree of security,” Balitsky said.

Drones are playing a crucial role in Ukraine’s military operations in the southern Mykolaiv region where Russian shelling has been escalating in recent weeks.

The leader of a Ukrainian reconnaissance team named “Fireflies” — who goes by the nom de guerre “Baton" — said his unit is using drones to monitor and combat any Russian attempt to seize more territory in the region.

“This is a war of artillery and drones,” Baton told reporters, as he observed smoke rising after an attack on a Russian position a few kilometers away on a monitor with the feed sent from the vehicle.

Drones are the only “eyes,” Baton said.

After failing to capture Ukraine's capital, Kyiv, early in the war, the Russian military focused its strength on trying to seize all of the country's eastern Donbas region. Pro-Moscow separatists have fought Ukrainian forces in the region for eight years and control some territory as self-proclaimed republics.

The British Defense Ministry said Tuesday that Russian forces had made the most progress in the past month in moving toward the town of Bakhmut — an advance limited to about 6 miles.

However, the ministry cautioned that despite the attention required in southern Ukraine, Russia had maintained attacks on Ukrainian positions in the east.

The governor of eastern Ukraine's Donetsk province, Pavlo Kyrylenko, said the Russians were trying to press their offensive in several areas. Kharkiv, the country's second-largest city, came under Russian shelling four times over the past 24 hours, and some city infrastructure was damaged.