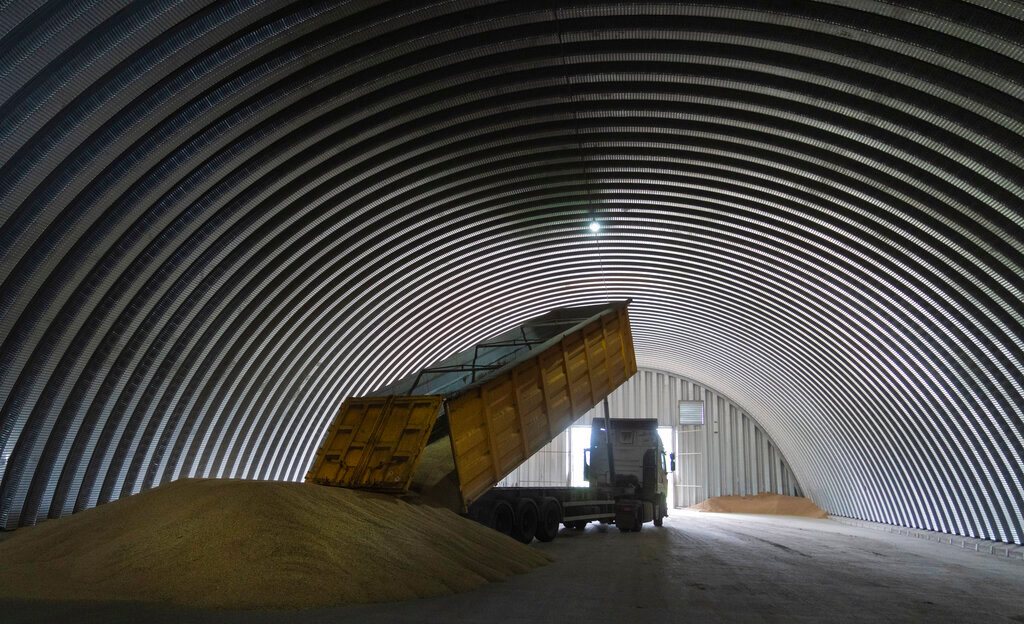 A dump track unloads grain in a granary in the village of Zghurivka, Ukraine, Tuesday, Aug. 9, 2022. (AP Photo/Efrem Lukatsky) 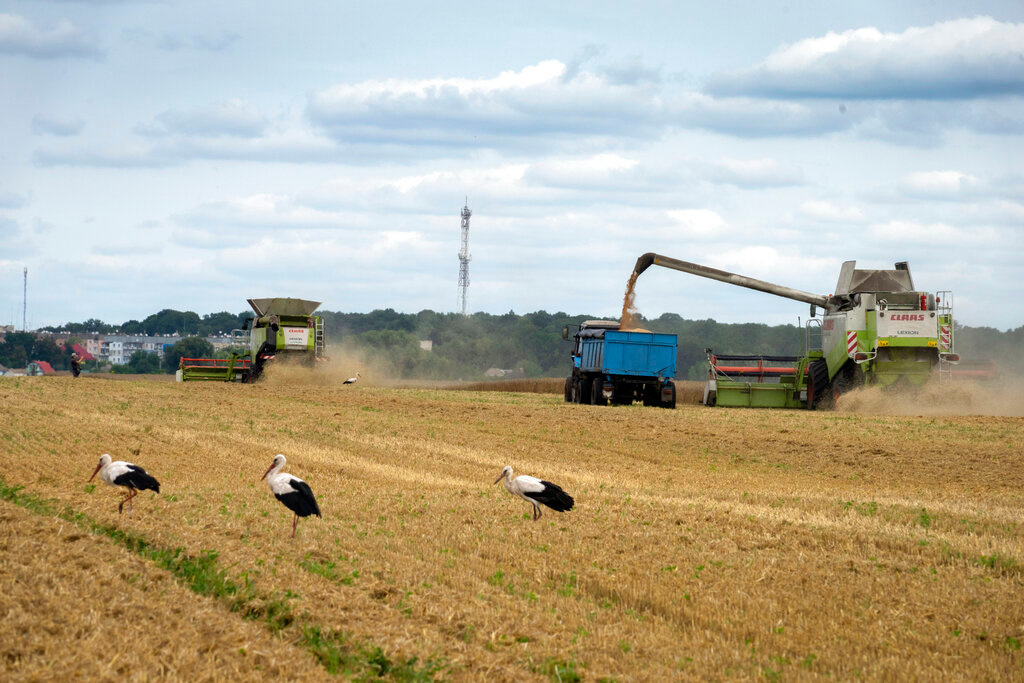 Storks walk in front of harvesters in a wheat field in the village of Zghurivka, Ukraine, Tuesday, Aug. 9, 2022. (AP Photo/Efrem Lukatsky)
Previous Next
Posted Friday, August 12, 2022 9:24 am
By SUSIE BLANN, Associated Press

KYIV, Ukraine (AP) — A ship approached Ukraine on Friday to pick up wheat for hungry people in Ethiopia, in the first food delivery to Africa under a U.N.-brokered plan to unblock grain trapped by Russia’s war and bring relief to some of the millions worldwide on the brink of starvation.

For months, fighting and a Russian blockade meant grain produced in Ukraine, known as the world's breadbasket, piled up in silos, sending food prices sky-high and leading to hunger in Africa, the Middle East and parts of Asia. In recent days, several ships carrying grain have left Ukrainian ports under the new deal — but most of the shipments were of animal feed and went to Turkey or Western Europe.

But on Friday, European Council President Charles Michel announced that the first shipment by the U.N.’s World Food Program of humanitarian aid for Africa would soon load and then depart. In the afternoon, MarineTraffic, a tracking website, showed the ship headed toward southern Ukraine.

Michel said the ship would bring grain to Ethiopia, saying "cooperation of all involved actors is key” to alleviating food shortages and hunger around the world. The Brave Commander was expected to carry take more than 23,000 metric tons, according to Ukraine's Infrastructure Ministry — only a tiny portion of the some 20 million tons of grain that has languished in Ukraine. The ship was expected to dock in Horn of Africa nation of Djibouti.

Ethiopia, along with neighboring Somalia and Kenya, is in the grips of the driest drought in four decades in the Horn of Africa. Thousands of people across the region have died from hunger or illness this year. Forecasts for the coming weeks indicate that for the first time, a fifth straight rainy season will fail to materialize. Millions of livestock, the basis of many families’ wealth and food security, have died.

“Millions of households will struggle to cope with these shocks” in Ethiopia, according to a new assessment by the Famine Early Warning Systems Network. “Food assistance needs are at record levels, with up to 15 million people in need of food assistance.”

While one shipment won't have any major effect on the crisis, the World Food Program still heralded it as an “important step" in getting Ukrainian grain out of the country to the worst-affected countries.

While the news provided a rare glimmer of hope, it was offset by the incessant fighting in the eastern Ukrainian region of the Donbas, where much of the fighting has been centered as the war approaches the six-month mark. The town of Kramatorsk was hit by 11 rockets overnight. Seven people were killed and 14 others were wounded in and around the town, which remains cut off from gas, running water and electricity.

“Three quarters of the population of the region have already been evacuated, because incessant shelling by the Russian army doesn’t leave civilians any choice — it’s either to die from wounds, or from hunger and cold in winter,” Donetsk regional governor Pavlo Kyrylenko told Ukrainian television.

The threat of a nuclear accident also loomed in eastern Ukraine where shelling has hit an area that is home to Europe's largest nuclear plant.

Shelling near the Russian-controlled Zaporizhzhia facility continued overnight. Russian forces fired more than 40 rockets at the city of Marhanets, which is across the Dnieper river from the power plant. Three people were wounded in the most recent shelling, including a 12-year-old boy. The neighboring city of Nikopol was shelled as well, said Valentyn Reznichenko, the governor of the Dnipropetrovsk region.

International Atomic Energy Agency Director-General Rafael Grossi urged Russia and Ukraine, who blame each other for the attacks at the plant, to immediately allow nuclear experts to assess damage and evaluate safety and security at the sprawling nuclear complex where the situation “has been deteriorating very rapidly.”