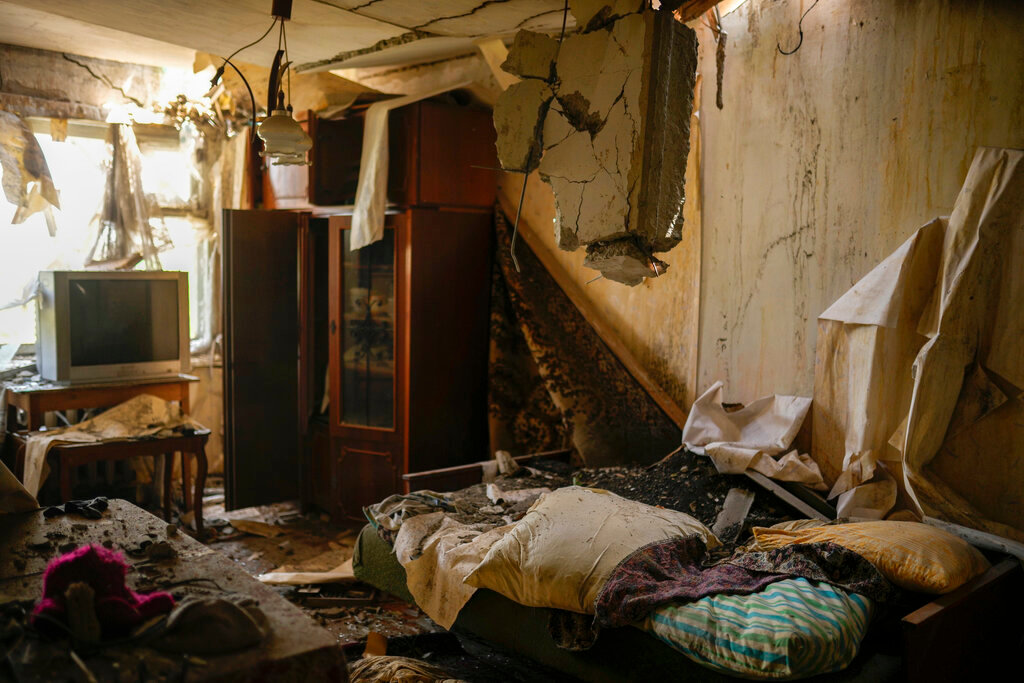 Debris covers the living room of an apartment in a residential building heavily damaged in a Russian bombing in Bakhmut, eastern Ukraine, Monday, May 30, 2022. (AP Photo/Francisco Seco) 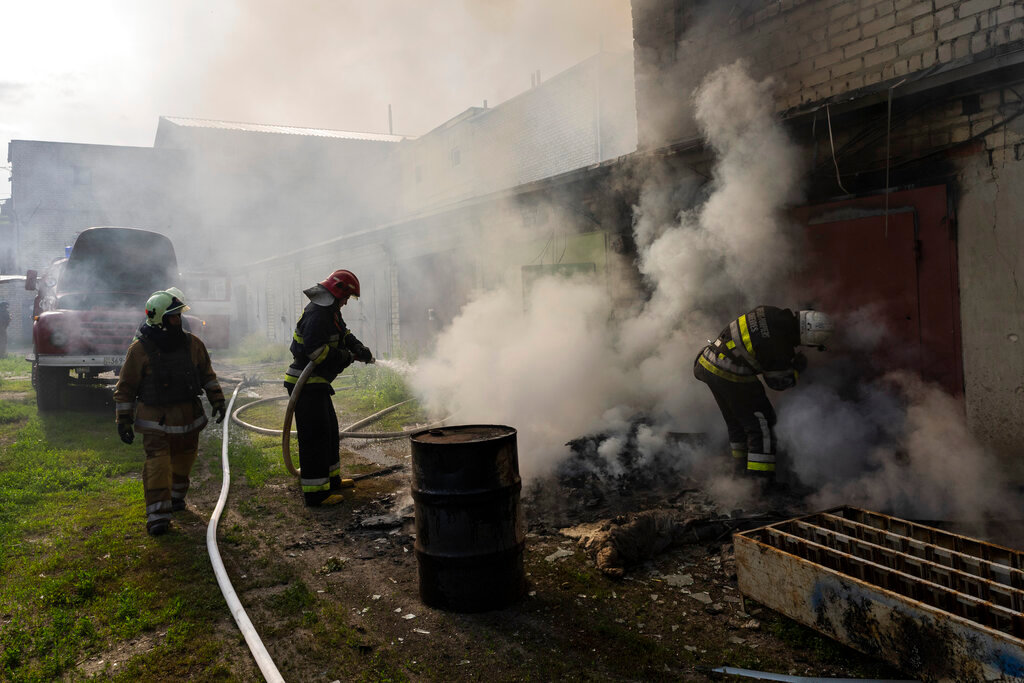 Ukrainian firefighters try to extinguish a fire in a warehouse after a Russian strike in Kharkiv, eastern Ukraine, Monday, May 30, 2022. (AP Photo/Bernat Armangue)
Previous Next
Posted Tuesday, May 31, 2022 9:03 am
By YURAS KARMANAU and ELENA BECATOROS, Associated Press

SLOVIANSK, Ukraine (AP) — Russian forces in a “frenzied push” have seized half of the eastern Ukrainian city of Sievierodonetsk that is key to Moscow’s efforts to quickly complete the capture of the industrial Donbas region, the mayor told The Associated Press on Tuesday.

“The city is essentially being destroyed ruthlessly block by block,” Oleksandr Striuk said. He said heavy street fighting continues and artillery bombardments threaten the lives of the estimated 13,000 civilians still sheltering in the ruined city that once was home to more than 100,000.

It’s impossible to track civilian casualties amid the round-the-clock shelling, said the mayor, who believes that more than 1,500 residents have died of various causes since Russia’s invasion of Ukraine in late February. Evacuation efforts from Sievierodonetsk have been halted because of shelling.

“Civilians are dying from direct strikes, from fragmentation wounds and under the rubble of destroyed buildings, since most of the inhabitants are hiding in basements and shelters,” Striuk said.

Electricity to the city has been cut off and people need water, food and medicine, the mayor said: “There are food supplies for several more days, but the issue is how to distribute them.”

Sievierodonetsk is important to Russian efforts to capture the Donbas before more Western arms arrive to bolster Ukraine’s defense. Moscow-backed separatists already held territory in the region and have been fighting Ukrainian troops for eight years.

Military analysts described the fight for Sievierodonetsk as part of a race against time for the Kremlin. The city. which is 90 miles south of the Russian border, is in an area that is the last pocket of Ukrainian government control in the Luhansk region.

In his nightly video address, Ukrainian President Volodymyr Zelenskyy said the situation in the Donbas remains “extremely difficult” as Russia has put its army’s “maximum combat power” there.

At least three people were killed and six more wounded overnight in a Russian missile strike on the city of Sloviansk, west of Sievierodonetsk, Donetsk regional governor Pavlo Kyrylenko said in a Facebook post on Tuesday morning. A school was among several buildings damaged. A crater marked the road between two apartment buildings heavily pockmarked by shrapnel.

Blood smeared the floor and stairwell of one building.

Resident Olena Voytenko, 59, said she knew one of the people killed, a man whose apartment caught fire in the blast. She believes he burned to death.

“I was on my sofa and suddenly my sofa just jumped in the air,” he said.

In neighboring Luhansk, two people were killed and four were wounded by shelling, Luhansk governor Serhiy Haidai said Tuesday on Telegram. Haidai didn’t specify when or where the attack occurred.

China sets sanctions on Taiwan figures to punish US, island

US, South Korea to begin expanded military drills next week