From the mission field: Prolonged drought brings famine, death and fear to Somalia 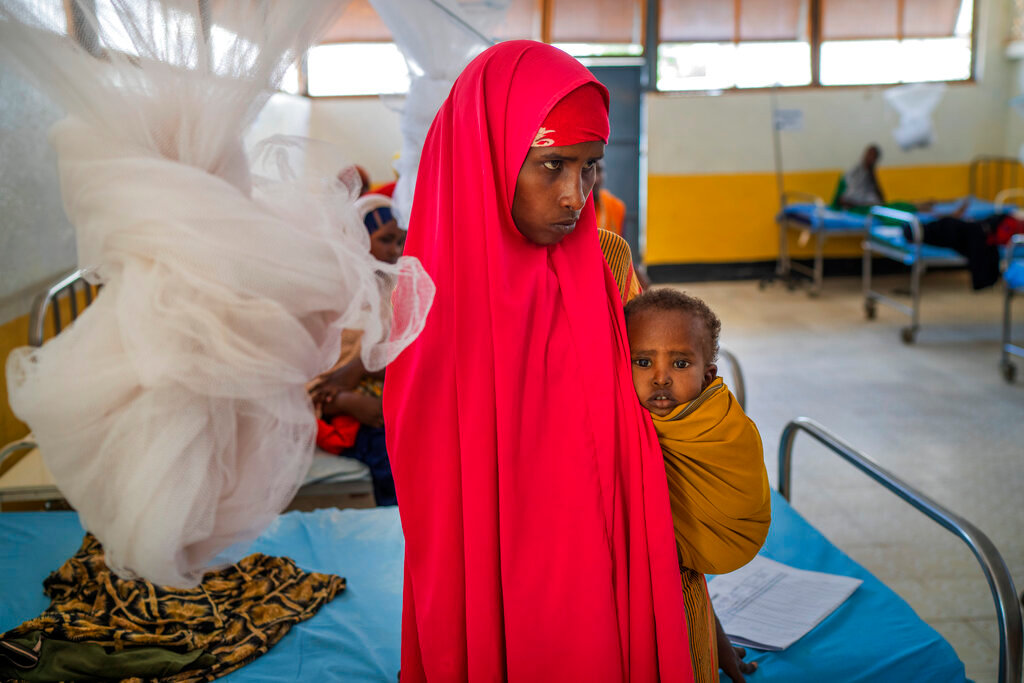 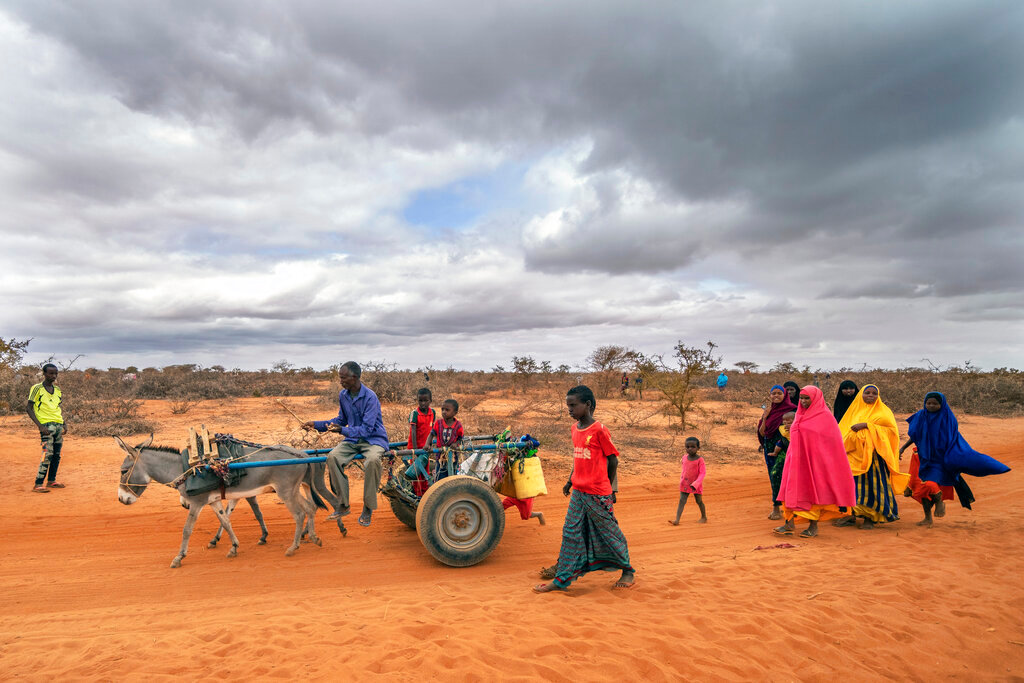 Mohamed Ahmed Diriye arrives with others to a displacement camp on the outskirts of Dollow, Somalia, Sept. 20, 2022. (AP Photo/Jerome Delay) 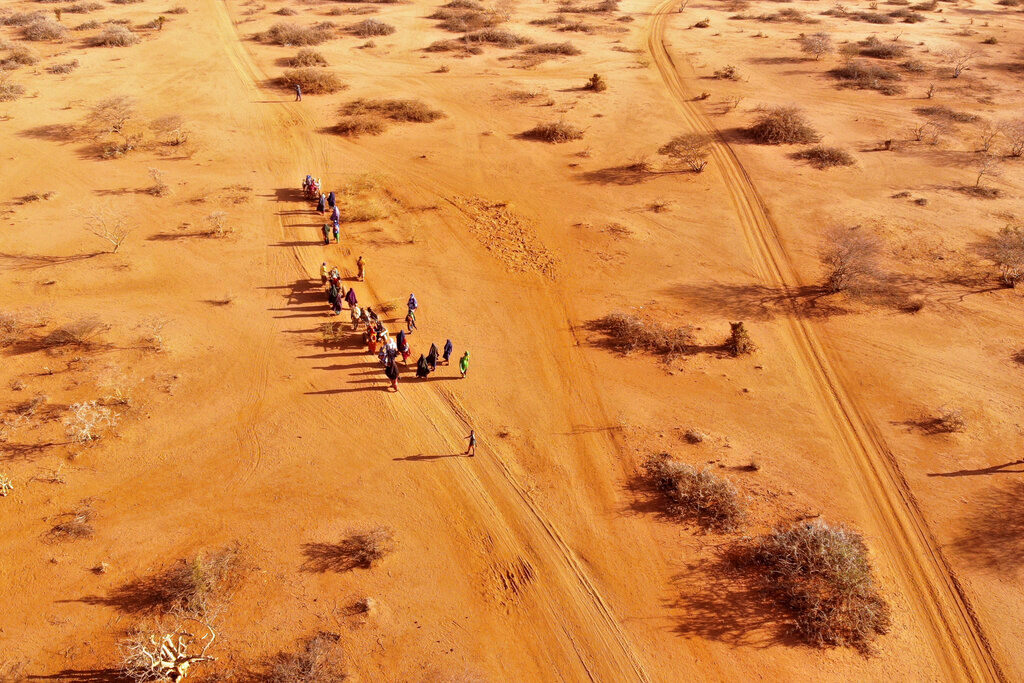 People arrive at a displacement camp on the outskirts of Dollow, Somalia, Sept. 21, 2022. (AP Photo/Jerome Delay) 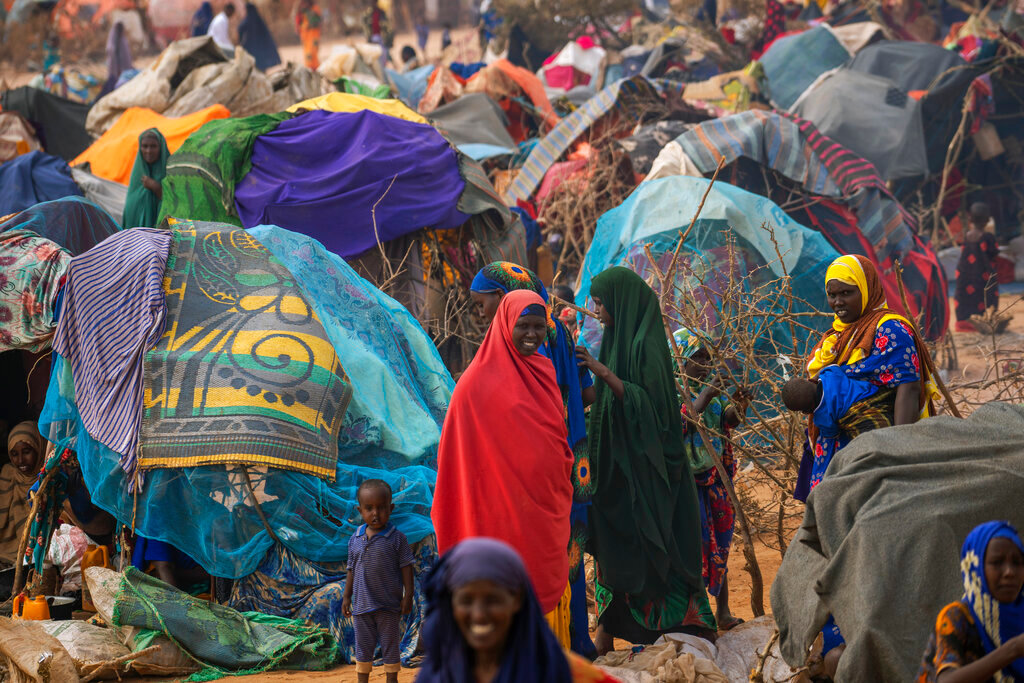 People walk through a displacement camp on the outskirts of Dollow, Somalia, Sept. 19, 2022. (AP Photo/Jerome Delay) 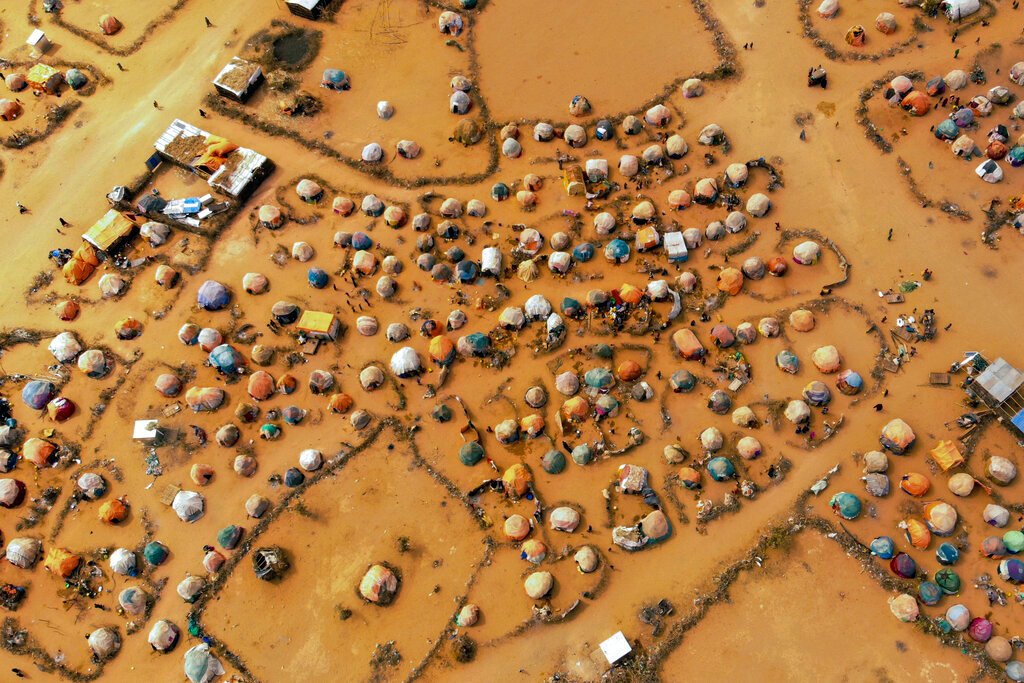 Huts made of branches and cloth provide shelter to Somalis displaced by drought on the outskirts of Dollow, Somalia, Sept. 19, 2022. (AP Photo/Jerome Delay) 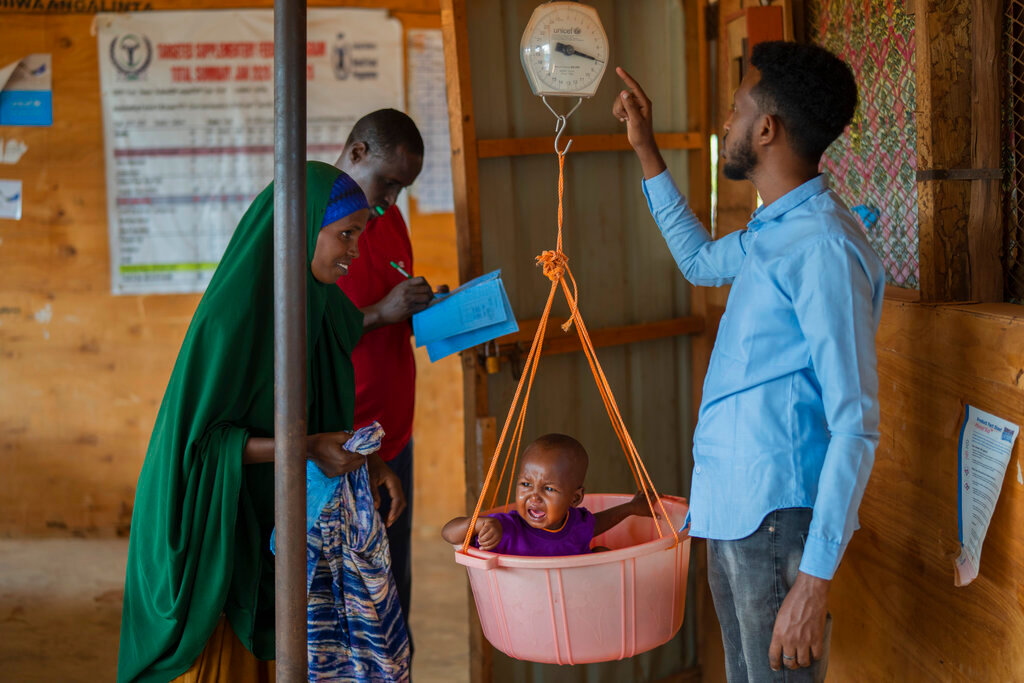 A child is weighed at a camp for displaced people on the outskirts of Dollow, Somalia, Sept. 19, 2022. (AP Photo/Jerome Delay) 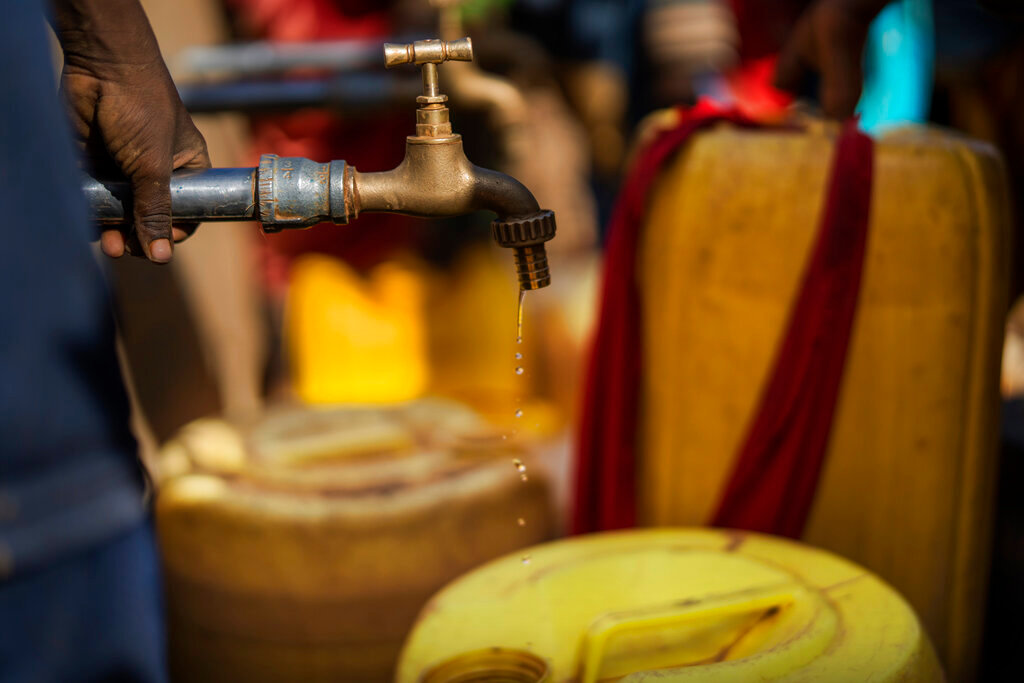 Water dribbles out of a faucet at a camp for displaced people on the outskirts of Dollow, Somalia, Sept. 20, 2022. (AP Photo/Jerome Delay)
Jerome 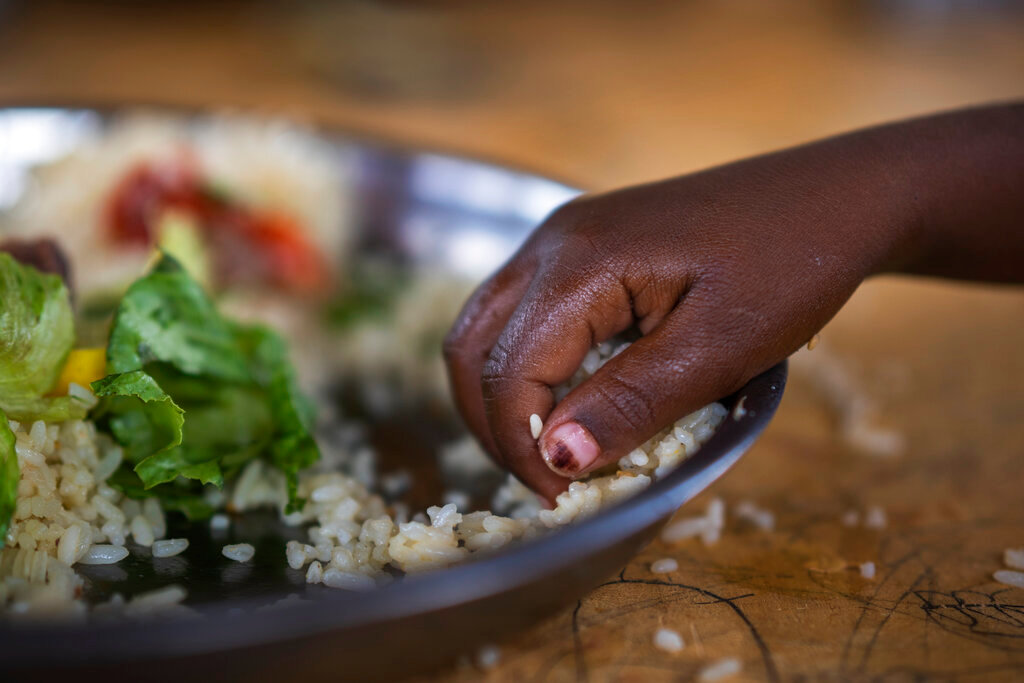 A girl eats at a school in Dollow, Somalia, Sept. 19, 2022. At midday, dozens of hungry children from the camps try to slip into a local primary school where the World Food Program offers a rare lunch program for students. (AP Photo/Jerome Delay) 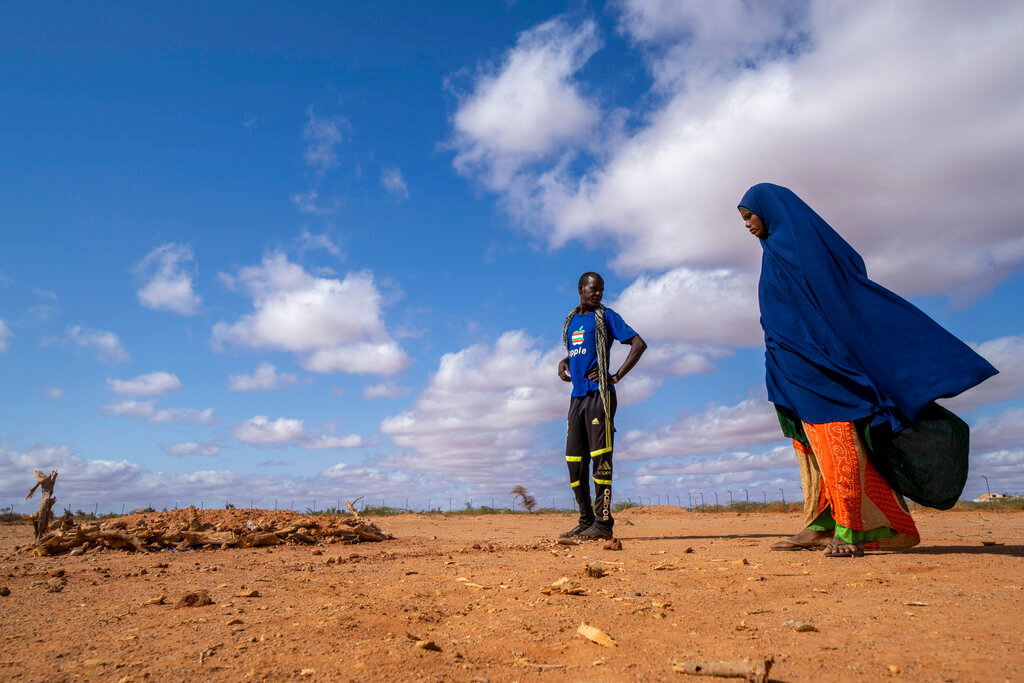 Fartum Issack, right, and her husband, Adan, stand by the grave of their 1-year-old daughter at a displacement camp on the outskirts of Dollow, Somalia, Sept. 19, 2022. (AP Photo/Jerome Delay)
Previous Next
Posted Wednesday, October 5, 2022 11:00 am
By CARA ANNA, Associated Press

DOLLOW, Somalia (AP) — A man in a donkey cart comes wheeling through the dust, carrying two small, silent boys. The sky is overcast. It could rain. It won’t. It hasn’t for a very long time.

Mohamed Ahmed Diriye is 60 years old, and he’s completing the grimmest journey of his life. He set off from a seaside city on the northern edge of Somalia two weeks ago. People were dying. Livestock were dying. He decided to abandon work as a day laborer and flee to the other end of the country, crossing a landscape of carcasses and Islamic extremist-held territory along the way.

Seven hundred miles later, he is exhausted. The food has run out. He clutches a battered stick in one hand, the nearly empty cart in the other. His boys are just 4 and 5.

They had tried to escape, Diriye says. “But we came across the same drought here.”

More than 1 million Somalis have fled and discovered that, too.

Somalis say the current drought is worse than any they can remember. It has astonished resilient herders and farmers by lasting four failed rainy seasons, starting two years ago. The fifth season is underway and likely will fail too.

A rare famine declaration could be made as soon as this month, the first significant one anywhere in the world since Somalia’s famine a decade ago. Thousands of people have died, including nearly 900 children under 5 being treated for malnutrition, according to United Nations data. The U.N. says half a million such children are at risk of death.

As the world is gripped by food insecurity, Somalia, a country of 15 million people shaking off its past as a failed state, can be considered the end of the line. It stumbles amid several global crises descending at once.

They include Russia’s invasion of Ukraine, which stalled ships carrying enough grain to feed hundreds of millions of people. A drop in humanitarian donations, as the world shifted focus to the war in Ukraine. One of the world’s deadliest Islamic extremist groups, which limits the delivery of aid.

The Associated Press spoke with a dozen people in rapidly growing displacement camps during a visit to southern Somalia in late September. All say they’ve received little aid, or none. A day’s meal might be plain rice or just black tea. Many camp residents, overwhelmingly women and children, beg from neighbors, or go to sleep hungry.

Mothers walk for days or weeks through bare landscapes in search of help, at times finding that the withered, feverish child strapped to them has died along the way.

“We’d grieve, stop for a while, pray,” Adego Abdinur says. “We’d bury them beside the road.”

She holds her naked 1-year-old in front of her new home, a fragile hut of plastic sacks and stripped branches. It’s one of hundreds scattered over the dry land.

Abdinur and her six children walked more than 180 miles to get here, following rumors of assistance along with thousands of other people.

“We have seen so many children dying because of hunger,” she says.

At the heart of this crisis, in areas where famine likely will be declared, is an Islamic extremist group linked to al-Qaida. An estimated 740,000 of the drought’s most desperate people live in areas under al-Shabab’s control. To survive, they must escape.

Al-Shabab’s grip on large parts of southern and central Somalia was a major contributor to deaths in the 2011 famine.

In a surprise comment on the drought in late September, al-Shabab called it a test from Allah, “a result of our sins.” The group claimed it had offered food, water and free medical treatment to more than 47,000 people since last year.

But in rare accounts of life inside al-Shabab-held areas, several people told the AP they had seen no such aid. Instead, they said, the extremists continue their harsh taxation of families’ crops and livestock even as they withered and died. They spoke on condition of anonymity for fear of retaliation.

Some flee at night to escape the fighters’ attention, with men and even young boys often being forbidden to leave. One woman says people who received assistance from the outside would be attacked. Weeks ago, she says, al-Shabab killed a relative who had managed to take a sick parent to a government-held city and then returned.

Those who escaped al-Shabab now cling to a bare existence. In the only treatment center for the most severely malnourished in the immediate region, 1-year-old Hamdi Yusuf is a sign of hope.

She was little more than bones and skin when her mother found her unconscious, two months after arriving in the camps. “The child was not even alive,” recalls Abdikadir Ali Abdi, acting nutrition officer with the aid group Trocaire.

Now the girl is revived. But the ready-to-use therapeutic food so crucial to the recovery of children like her could run out in the coming weeks, Abdi says.

“We received a food distribution yesterday,” Ibrahim says. “It was the first since we arrived.”

Hundreds of families continue to emerge from the empty horizon across Somalia, bringing little but grief.

One day in mid-September, 29-year-old Fartum Issack and her husband carried a small body along a dusty track to a graveyard. Their 1-year-old daughter had arrived at camp sick and hungry. She was rushed for treatment, but it was too late.

The graveyard opened in April and already had 13 graves. There’s easily room for hundreds more.

Issack and her husband buried their daughter in the middle of the empty ground.

“We wanted to easily recognize her,” Issack says.

At the camp, eight other hungry daughters are waiting.