The tiniest babies: Shifting the boundary of life earlier 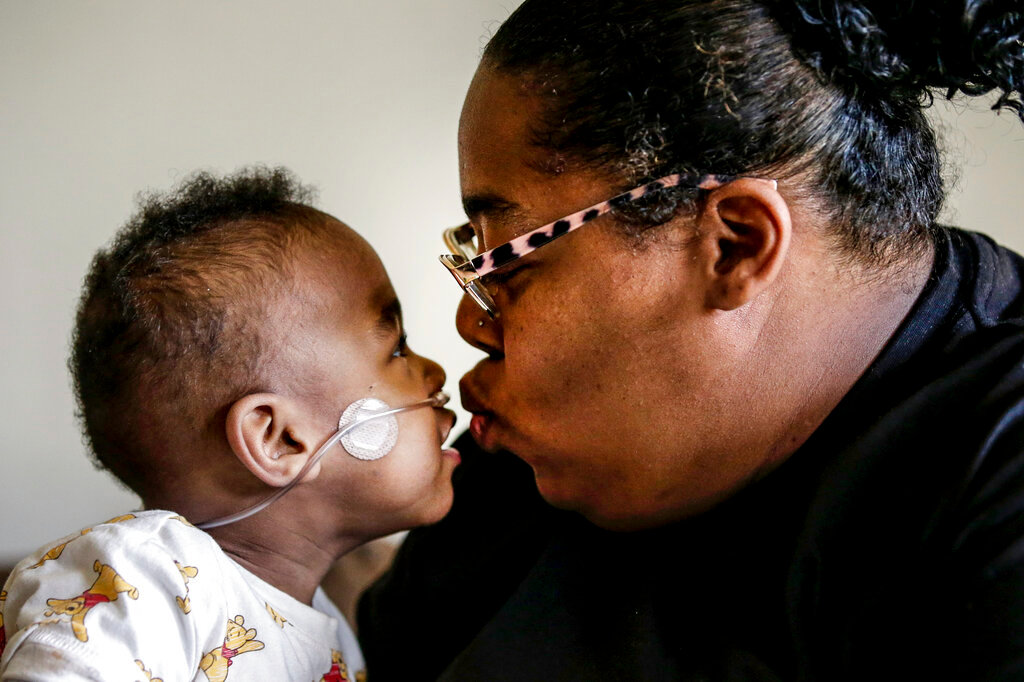 Curtis Means kisses his mother, Michelle Butler at their home in Eutaw, Ala., on Wednesday, March 23, 2022. (AP Photo/Butch Dill) 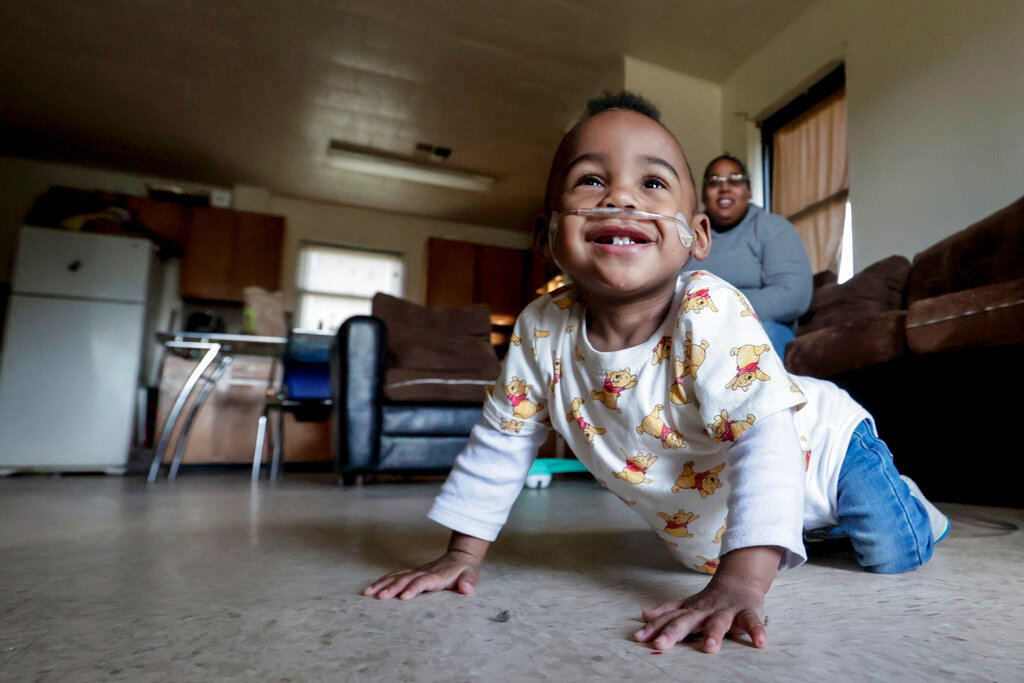 BIRMINGHAM, Ala. (AP) — Michelle Butler was just over halfway through her pregnancy when her water broke and contractions wracked her body. She couldn’t escape a terrifying truth: Her twins were coming much too soon.

Dr. Brian Sims entered the delivery room and gently explained that babies born so early likely won't live. He told Butler he could keep them comfortable as they died.

But she pleaded through tears: “Give my twins a chance to survive.”

Until recently, trying to save babies born this early would have been futile. Butler was in the fifth month of her pregnancy, one day past 21 weeks gestation. That’s seven weeks earlier than what doctors once considered “the lower limit of viability,” the earliest an infant could possibly survive outside the womb. But over the last half century, medical science has slowly shifted that boundary downward.

Growing numbers of extremely premature infants are getting life-saving treatment and surviving. A pivotal study in the Journal of the American Medical Association this year, which looked at nearly 11,000 such births in a neonatal research network that is part of the National Institutes of Health, found that 30% of babies born at 22 weeks, 56% born at 23 weeks and 71% born at 24 weeks lived at least until they were healthy enough to be sent home home if doctors tried to save them.

Curtis and C’Asya Means came into the world on July 5, 2020, at the University of Alabama hospital, each weighing less than a pound and small enough to fit in an adult’s hand.

Their divergent paths reflected both sides of extreme prematurity.

Curtis became the earliest surviving “micropreemie” in the world – teething, trying solid foods and tooling around the house in his walker.

Each year in the U.S, about 380,000 babies are born prematurely, or earlier than 37 weeks of a typical 40-week pregnancy. About 19,000 arrive before the third trimester.

Babies born so soon faced bleak prospects until the latter half of the 20th century. That’s when incubator technology evolved, neonatology became a specialty and two medications began to be widely used: steroids during pregnancy to speed up fetal lung development, and synthetic “surfactant” given to babies to keep their airways open.

“I don’t think I could point to a single new technology or new medication or approach that has been the driver of keeping infants alive at these really low limits of gestation,” said Dr. Elizabeth Foglia, a neonatologist at Children’s Hospital of Philadelphia. “It’s just a slow evolution” that cascaded into “a sea change.”

For many years, the “edge of viability” remained around 24 weeks, she said. During her pediatric residency from 2006-2009, “those were the patients that were sort of the earliest we would intervene and the patients we were most worried about.”

Nicholas Hall’s twins, Graham and Reece, were born at 25 weeks in 2006. Graham spent his 45-day life connected to a breathing tube, getting nutrients through an intravenous drip. “He could never rest,” said the Bloomington, Indiana, dad, who with his now ex-wife started a nonprofit to support parents called Graham’s Foundation.

Reece survived. But she spent 119 days in the NICU, needed emergency surgery for a buildup of fluid in her brain, and came home on oxygen. She still has a hearing problem called auditory processing disorder.

Complications remain common even as three decades of research show a progressive increase in survival rates for babies born at 22 to 25 weeks. Care for these babies also remains intense.

Even today, up to a year in the hospital isn’t unusual for micropreemies, and costs can run into the millions of dollars. Most of these infants spend time on ventilators, are warmed in isolettes and get fluids and nutrition through tubes. Their skin, as delicate as a burn victim’s, needs meticulous care.

Hospitals have differing practices on when to provide this sort of care to the very youngest micropreemies, which leads to varying survival rates. One survey found that about six in 10 U.S. hospitals actively treated 22-week babies in 2019, up from 26% in 2007. The data doesn’t include the few surviving babies born during the 21st week of pregnancy.

“If you’re an institution that’s fully committed to resuscitation at 22 weeks, then studies show pretty clearly that just by virtue of offering the full spectrum of intensive care, you are going to be more likely to have babies who survive,” Foglia said.

Sims, a neonatologist who is also a pediatrics professor at the University of Alabama at Birmingham, said whether to resuscitate or continue lifesaving care is a shared decision between parents and the medical team.

“But even when we don’t try anything, a baby that’s trying to live will show you that. You’ll see that the baby’s trying to take a breath,” Sims said. “We support the babies that give us those signs.”

As soon as Curtis and C’Asya arrived, Sims gave each a little bit of oxygen. Curtis’ heart rate quickly rose. His smaller sister didn’t respond as well. Other medical measures for the twins, such as ventilators and surfactant, couldn’t compensate for her immature lungs.

“They told me it was up to me to make the call” about withdrawing treatment, Butler said. “I actually was praying silently to myself. God came to me and told me, ‘If you give me C’Asya, I’ll give you Curtis.’”

Butler cradled her daughter for hours after she died. It was the first time she held her.

Curtis stayed in the NICU for nine more months. Butler made the 90-minute trek from her home in rural Eutaw to Birmingham several times a week. She read books to Curtis and often held him inside her shirt so his skin touched hers.

Curtis went home tethered to oxygen. Butler, a single mom with two older kids, made sure the levels didn’t drop, gave him medicines five times a day and regularly set his feeding pump to dispense the right amount of food into a tube in his stomach.

More than a year later, Curtis is down to one medication for high blood pressure and two inhalers. He can be unhooked from oxygen for an hour a day. At 22 months old and around 20 pounds, he’s an active toddler who crawls, pulls himself up and plays with his older sister and brother.

When Butler woke him one morning, he fussed and fumbled with the feeding tube that still provides much of his nutrition.

But soon he was scooting his walker around the kitchen and curiously opening cabinets as Butler scrambled eggs, one of a growing number of soft and pureed foods he can now ingest.

“Wanna eat-eat?” she coaxed, offering a tiny bit of egg.

He eagerly popped it in his mouth, then smiled and grabbed a much bigger helping from her plate.

In the future, doctors expect more micropreemies like Curtis to survive.

One reason? Saving them will become more accepted and common. Last year, the influential American College of Obstetricians and Gynecologists updated its recommendations to say steroids before birth may be considered if resuscitation is planned at 22 weeks. Previously, the measure was not recommended for babies that young.

And down the road, scientists are working on lifesaving equipment tailored to smaller bodies and an artificial womb they hope could someday grow a fetus outside of a person.

Such advances are sure to deepen ethical dilemmas.

“There always will be a limit of viability. Where that limit is may change over time as technology evolves and our ability to care for less and less mature babies evolves,” Foglia said. But wherever that limit is, “survival may be possible but not guaranteed. And survival without disability is certainly not guaranteed.”

Cori Laemmle of Fort Wayne, Indiana, who gave birth to twin boys in 2020 at 22 weeks, said decisions about whether to treat such infants should consider the individual circumstances and be guided by a question: “Are the interventions going to do more harm than good?”

Washington University's Warner said everyone needs to think about how the babies might suffer.

This was why Laemmle and her husband decided to let one of her twins go — he was crashing with a collapsed lung. The other twin responded well to treatment. He's now getting speech and physical therapy and hitting the usual milestones in all areas but speech.

Doctors are hopeful that Curtis Means – he has his father's last name – will also continue to thrive. Dr. Brett Turner, his pulmonologist, now sees him every two or three months to manage his ongoing lung disease.

“As he grows … those visits will slowly all be able to be spaced out,” Turner said. “Hopefully, he’ll require fewer and fewer doctors to care for him.”

At home, his 35-year-old mother spends less time tending to Curtis’ medical needs and more time just hanging out with him.

One afternoon, she pulled Curtis out of his walker and into her arms. He grabbed at her face. She kissed his hand. She pulled down his Winnie-the-Pooh shirt, and they touched palms in a high five.

Butler, who is studying to be a cosmetologist, envisions Curtis going to school in a few years and becoming a doctor someday.

But as he grows, she always wants him to remember the twin who will never see such a future.

“Anytime he has a party, it’s going to be about her too," with both names on the cakes, Butler said. “I mention her name every day for him, to let him know he was a twin and ‘your twin is your angel.' And when he gets bigger, I’m going to get him a necklace where he can keep her ashes with him.”

At least 10 dead in mass shooting at Buffalo supermarket