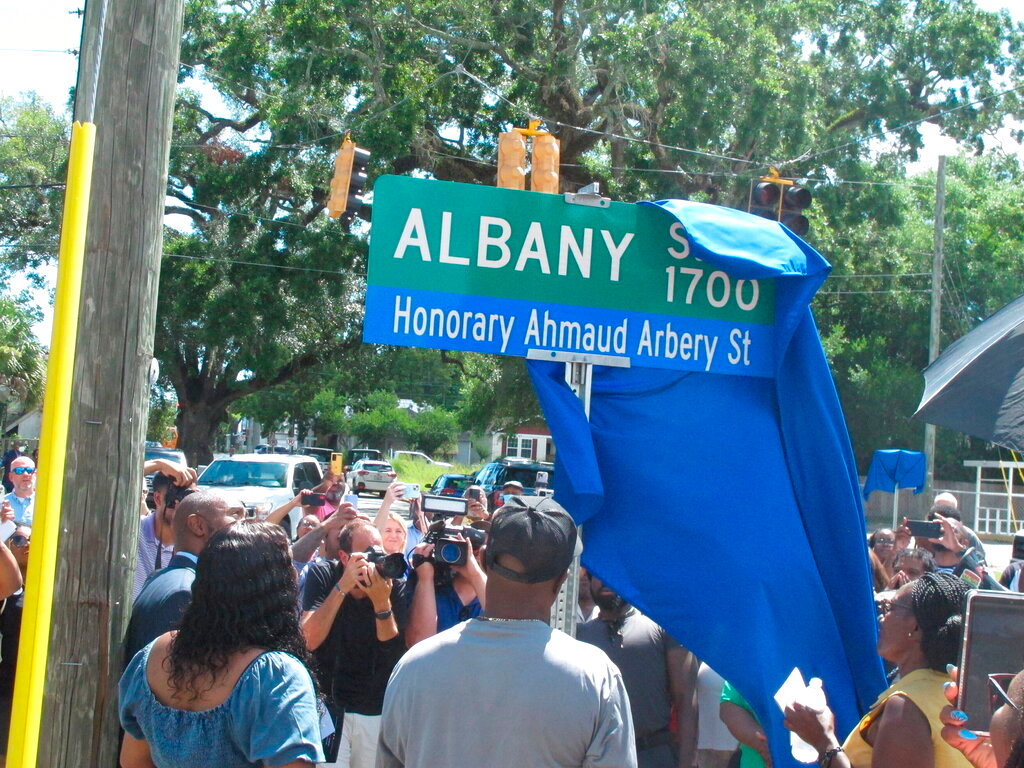 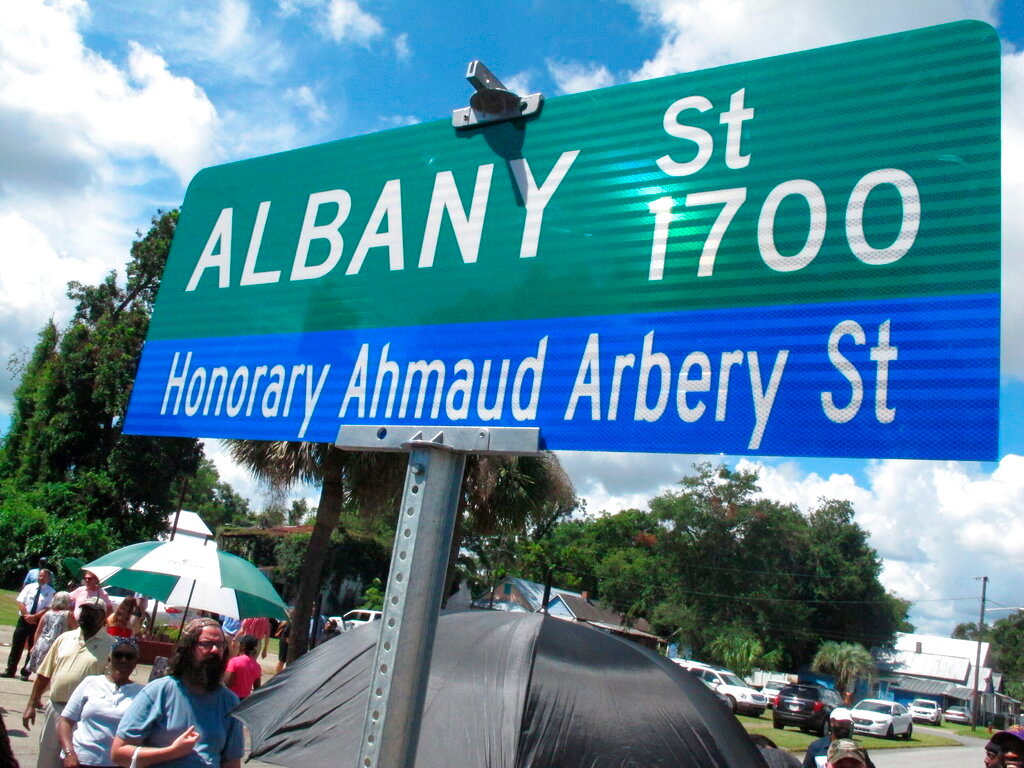 BRUNSWICK, Ga. (AP) — A crowd of dozens chanted on a sweltering street corner Tuesday as Ahmaud Arbery's hometown unveiled new street signs honoring the young Black man who was fatally shot after being chased by three white men in a nearby neighborhood — a crime local officials vowed to never forget.

Officials in coastal Brunswick, where Arbery grew up, have ordered that intersections along all 2.7 miles of Albany Street that runs through the heart of the city's Black community will have additional signs designating it as Honorary Ahmaud Arbery Street.

The first two signs were unveiled Tuesday at an intersection near the Brunswick African-American Cultural Center, where one wall is adorned with a giant mural of Arbery's smiling face.

“That's an honor, is all I can say,” said Brenda Davis, a dock worker at Brunswick's busy seaport who lives on Albany Street along a stretch of modest brick and cinder block homes. “He means something to everybody, though a lot of people didn't know him.”

Arbery was killed Feb. 23, 2020, after he was spotted running in the Satilla Shores subdivision not far from his mother's house. A white father and son, Greg and Travis McMichael, grabbed guns and used a pickup truck to chase after Arbery, suspecting he was burglar. A neighbor, William “Roddie” Bryan, joined the pursuit in his own truck and recorded cellphone video of Travis McMichael shooting Arbery at close range with a shotgun.

No arrests were made for more than two months until the graphic cellphone video leaked online and Georgia state investigators took over the case from local police.

More than two years of criminal proceedings against Arbery's killers concluded Monday as U.S. District Court Judge Lisa Godbey Wood sentenced the McMichaels to life and Bryan to 35 years in prison after their February convictions on federal hate crime charges. All three were already headed to state prison after being found guilty of Arbery's murder last November.

Brunswick weathered both criminal trials without violence as his family insisted any demands for justice be carried out peacefully.

City commissioners voted in December to place Arbery's name on a city street with a resolution proclaiming that he had become “a symbol of strength and unity within our community.”

“We did this because we want to always remember what happened," Cornell Harvery, who served as Brunswick's mayor when the street designation was adopted, said Tuesday. “You say, `Why would you want to remember such a tragedy?' Because sometimes it takes that to make a change. I am so sorry for the family ... but history has seized us."

The crowd chanted “Long live Ahmaud Arbery!” as his mother and father tugged on opposite ends of a blue covering to reveal the new street sign bearing their son's name underneath.

Wanda Cooper-Jones, Arbery's mother, said that although she still mourns his death, she also takes pride in what's been accomplished in its wake. Georgia adopted a hate crimes law imposing additional penalties for crimes motivated by a victim’s race, religion, sexual orientation or other factors. And state lawmakers gutted an 1863 state law authorizing private citizens to make arrests, which Arbery's pursuers had sought to use to justify the deadly chase.

“I look at the change Ahmaud has brought since his passing,” Cooper-Jones told the dozens gathered for the street dedication.

“My only prayer is you guys will not forget his name," she said, breaking down in tears. "Please promise me you guys will always say his name.”

For Arbery's family, the court battles aren't over. The McMichaels and Bryan have appealed their murder convictions, and almost surely will appeal the hate crimes verdicts as well.

Meanwhile, Jackie Johnson, the local district attorney at the time of the killing, has been indicted on state misconduct charges alleging she used her position to protect the McMichaels. Greg McMichael was a retired investigator who worked in Johnson’s office, and prosecutors say they exchanged several phone calls in the weeks after the shooting. Johnson was voted out of office in the fall of 2020. She has denied wrongdoing.

Still, some in Brunswick are hoping for a respite now that sentences have been imposed in both cases against Arbery's killers.

“There's a sigh of relief now that justice is served,” said the Rev. Abra Lattany Reed, a Brunswick native and Methodist minister who attended the street sign dedication Tuesday.

She added: “It would be a fair assessment to say we're tired of the spotlight. This isn't the kind of spotlight you want on your community.”