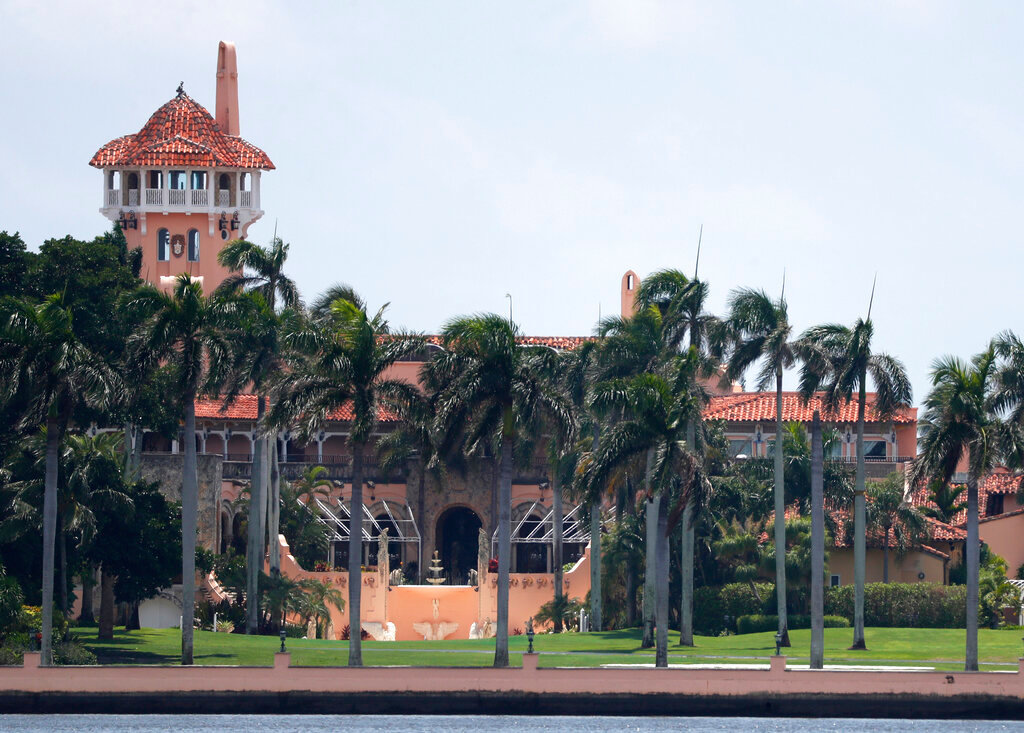 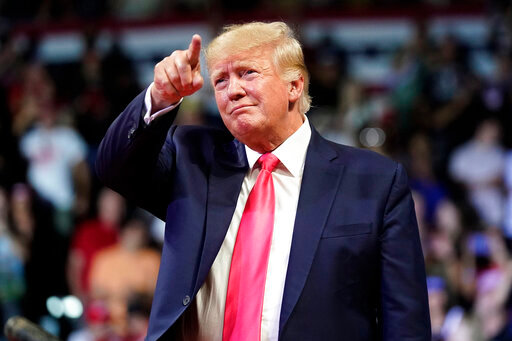 Former President Donald Trump points to the crowd as he arrives to speak at a rally July 22, 2022, in Prescott, Ariz. Trump is returning to Washington for the first time since leaving office to deliver a policy speech Tuesday night, July 26 before allies who have been crafting an agenda for a possible second term. Trump will address the America First Policy Institute's two-day America First Agenda Summit. (AP Photo/Ross D. Franklin, File)
Ross D. Franklin
Previous Next
Posted Monday, August 8, 2022 7:26 pm

WASHINGTON (AP) — Former President Donald Trump said in a lengthy statement Monday that the FBI was conducting a search of his Mar-a-Lago estate and asserted that agents had broken open a safe. A person familiar with the matter said the action was related to a probe of whether Trump had taken classified records from his White House tenure to his Florida residence.

The action, which the FBI and Justice Department did not immediately confirm, marks a dramatic escalation in law enforcement scrutiny of Trump and comes as he has been laying the groundwork to make another bid for president. Though a search warrant does not suggest that criminal charges are near or even expected, federal officials looking to obtain one must demonstrate that they have probable cause that a crime occurred.

“After working and cooperating with the relevant Government agencies, this unannounced raid on my home was not necessary or appropriate,” Trump said in his statement.

He added: "These are dark times for our Nation, as my beautiful home, Mar-A-Lago in Palm Beach, Florida, is currently under siege, raided, and occupied by a large group of FBI agents. Nothing like this has ever happened to a President of the United States before.”

Justice Department spokesperson Dena Iverson declined to comment on the search, including about whether Attorney General Merrick Garland had personally authorized the search.

A person familiar with the matter, who spoke on condition of anonymity to discuss an ongoing investigation, said the search happened earlier Monday and agents were also looking to see if Trump had additional presidential records or any classified documents at the estate.

Federal law bars the removal of classified documents to unauthorized locations, though it is possible that Trump could try to argue that, as president, he was the ultimate declassification authority.

There are multiple statutes governing classified information, including a law punishable by up to five years in prison that makes it a crime to remove such records and retain them at an unauthorized location. Another statute makes it a crime to mishandle classified records either intentionally or in a grossly negligent manner.

US to begin screening travelers coming from Uganda for Ebola

Thousands attend Ohio's first 'March for Life'
Thousands of pro-life supporters gathered in Columbus, Ohio, on Thursday to show their support for a ban on abortion beginning at conception. Attendees rallied at the Ohio Statehouse before marching through the streets. The march, the first of its kind in Ohio, was organized by the same group that leads the Washington, D.C., march every January.

Biden: Nuclear 'Armageddon' risk highest since '62 crisis
NEW YORK (AP) — President Joe Biden says the risk of nuclear “Armageddon” is at the highest level since the 1962 Cuban Missile Crisis, as Russian officials speak of the possibility of using tactical nuclear weapons after suffering massive setbacks in the eight-month invasion of Ukraine.

US hiring stayed solid in September as employers add 263,000
WASHINGTON (AP) — America’s employers slowed their hiring in September but still added a solid 263,000 jobs — a dose of encouraging news that may mean the Federal Reserve’s drive to cool the job market and ease inflation is starting to make progress. Friday’s government report showed that last month’s job growth was down from 315,000 in August and that the unemployment rate fell to 3.5%.

Ian evacuees return to mud, rubble as death toll hits 101
SANIBEL ISLAND, Fla. (AP) — Hurricane Ian’s death toll has climbed into the triple digits. The number of recorded storm-related deaths rose Thursday to at least 101 in the eight days since the storm made landfall in southwest Florida. Of the total deaths, 92 were in Florida, according to reports from the Florida Medical Examiners Commission. Other storm deaths include five in North Carolina, three in Cuba and one in Virginia. Ian is the second-deadliest storm to hit the mainland United States in the 21st century behind Hurricane Katrina.

10 days later, Cubans still recovering from Hurricane Ian
LA COLOMA, Cuba (AP) — Cuban soldiers fix roofs and raise power poles under a blazing sun. Teachers salvage school supplies, and residents dry mattresses and cook over wood fires. Much needs to be done in La Coloma, a fishing and industrial town on Cuba’s coast that took the brunt of Hurricane Ian. Ten days after the storm left still unquantified devastation across western Cuba, and knocked out the power grid nationwide, many Cubans are still without electricity, water or many basic goods.

Hurricane Ian floods leave mess, insurance questions behind
NORTH PORT, Fla. (AP) — Christine Barrett and her family had to climb on top of their kitchen cabinets because of flooding that surged into their house during Hurricane Ian. They put water wings on their 1-year-old, and were rescued by boat the next day. Their community of North Port is about 5 miles inland. And the Barretts - like many neighbors - live in areas where flood insurance isn’t required. And therefore they don’t have it. Now many wonder how they’ll afford much-needed repairs.
© Copyright 2022 The Christian Index | Copyright/Terms of Use
Powered by Creative Circle Media Solutions