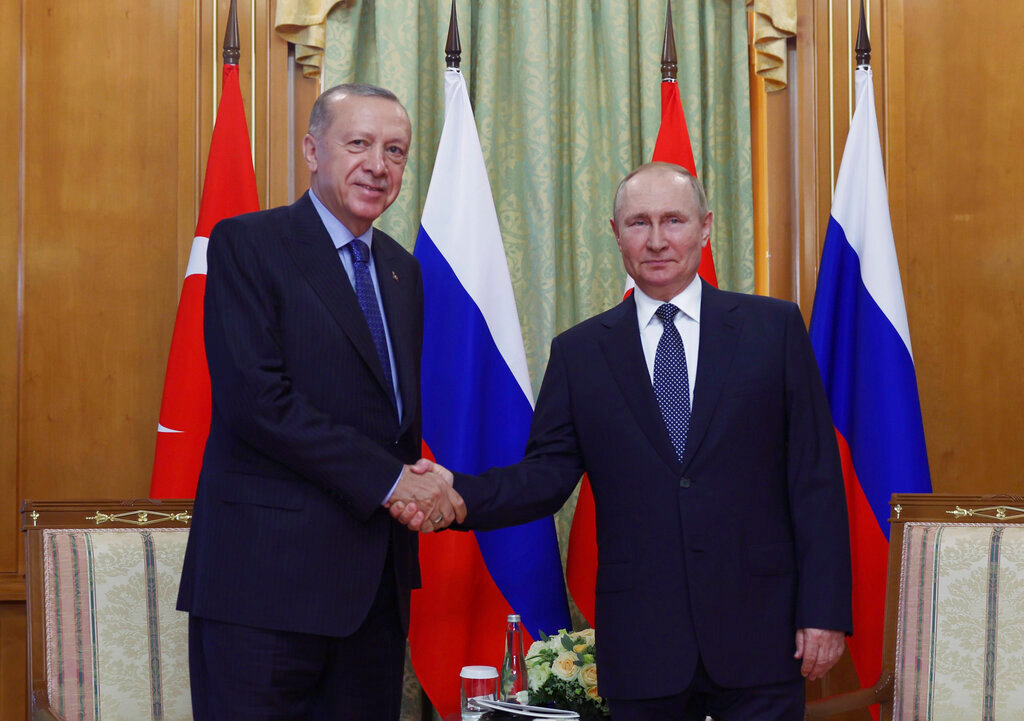 In this handout photo provided by the Turkish Presidency, Turkish President Recep Tayyip Erdogan, left, and Russian President Vladimir Putin shake hands prior to their meeting at the Rus sanatorium in the Black Sea resort of Sochi, Russia, Friday, Aug. 5, 2022.( Turkish Presidency via AP )
Posted Friday, August 5, 2022 10:12 am
By VLADIMIR ISACHENKOV and ZEYNEP BILGINSOY, Associated Press

MOSCOW (AP) — Turkish President Recep Tayyip Erdogan visited Russia Friday for talks with Russian President Vladimir Putin expected to focus on a grain deal brokered by Turkey, prospects for talks on ending hostilities in Ukraine, and the situation in Syria.

Speaking at the start of their meeting at Putin’s Black Sea residence in Sochi, Erdogan noted that their negotiations will help “put forward the role that Turkey and Russia play in the region.”

Last month, Turkey and the United Nations helped broker agreements between Russia and Ukraine clearing the way for Ukraine to export 22 million tons of grain and other agricultural products stuck in its Black Sea ports ever since Moscow sent troops into the country more than five months ago. The deals also allow Russia to export grain and fertilizer.

Putin thanked Erdogan on Friday for helping negotiate the grain agreements, noting its importance for many countries around the world. “It’s an acute issue for many developing countries, which face major problems with food and fertilizers,” he said.

Kremlin spokesman Dmitry Peskov told reporters that the talks in Sochi will allow Putin and Erdogan to review the implementation of the grain deal. He added that the two leaders will also discuss the situation in Ukraine and in Syria.

In March, Turkey hosted a round of talks between Russian and Ukrainian negotiators who discussed a possible deal to end the hostilities. But the talks fell apart after the meeting in Istanbul, with Russia and Ukraine blaming each other for the lack of progress.

NATO-member Turkey and Russia have a complex relationship. While the two countries support opposing sides in Syria and Libya, they cooperate closely on defense, energy, and trade deals. Their relationship has frustrated Turkey’s Western allies, who were particularly annoyed by Ankara's purchase of a sophisticated Russian air defense system.

Turkey has provided Ukraine with drones, which played a significant role in deterring Russian advance in the early stage of the conflict, but it hasn't joined sanctions with Russia.

Putin noted that Russian-Turkish trade doubled in the first five months of the year compared to the same period last year. The surge reflected Moscow’s growing focus on ties with Ankara as it faced bruising Western sanctions.

Speaking at the start of Friday’s talks in Sochi, Erdogan emphasized the importance of the nuclear plant project, expressing hope that it will face no delays. He noted that the nuclear power plant would supply 10% of the country’s energy needs.

Erdogan added that the talks would open a “very different page” on energy deals, tourism, transportation, and regional issues.”

Russia-Turkey relations hit a low point in 2015 when Turkey shot down a Russian warplane near the Syrian border and Moscow responded by halting tourism to Turkey and banning imports of fruit and vegetables and other items from Turkey.

While Moscow and Ankara have backed the opposite sides in the Syrian conflict, with Russia shoring up President Bashar Assad's government with Iranian assistance while Turkey supported the opposition, the two countries cooperated closely to negotiate a cease-fire deal in northwestern Syria.

Speaking to Putin Friday, Erdogan voiced hope that their discussion on Syria would “bring relief to the region.”