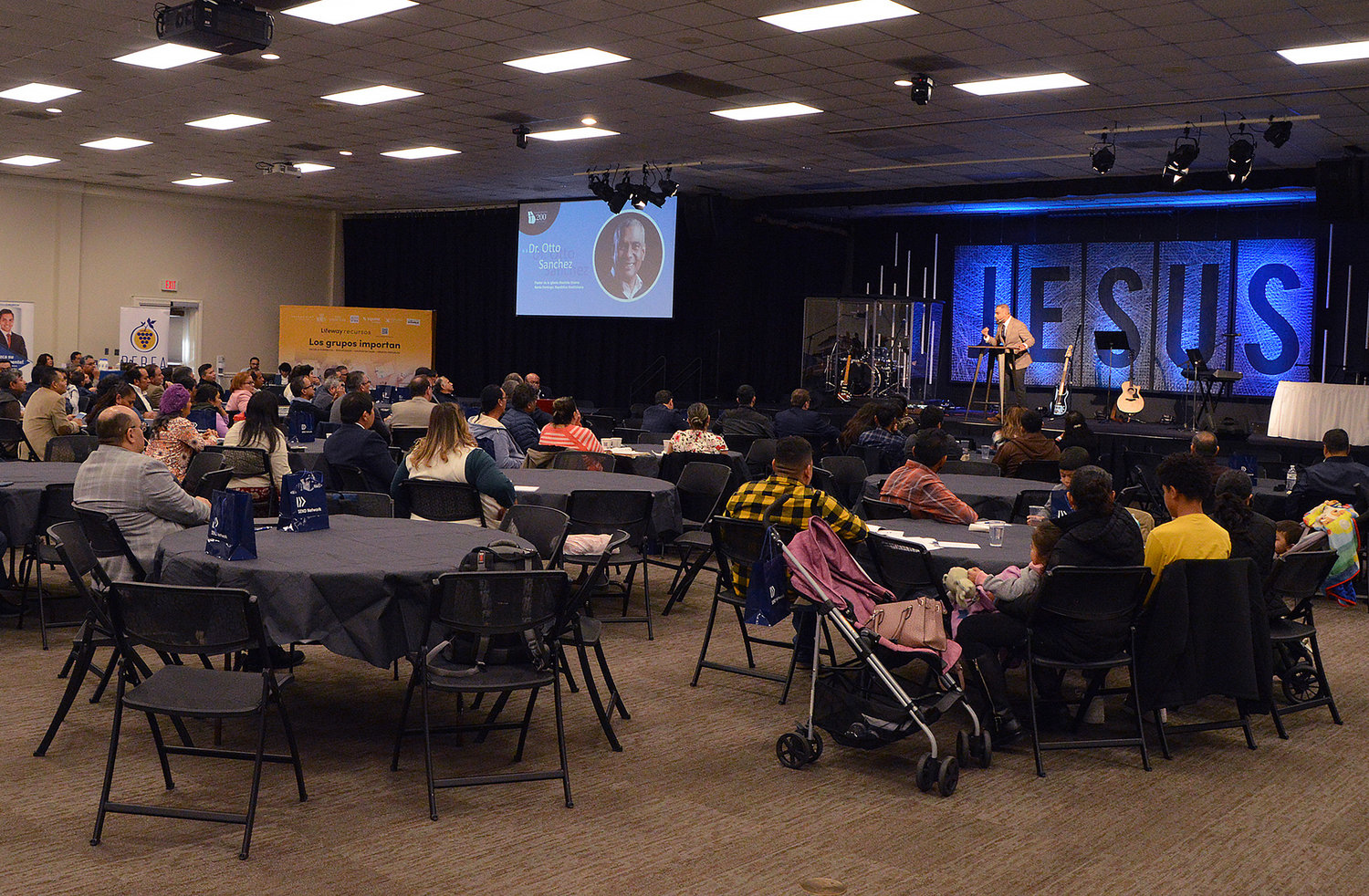 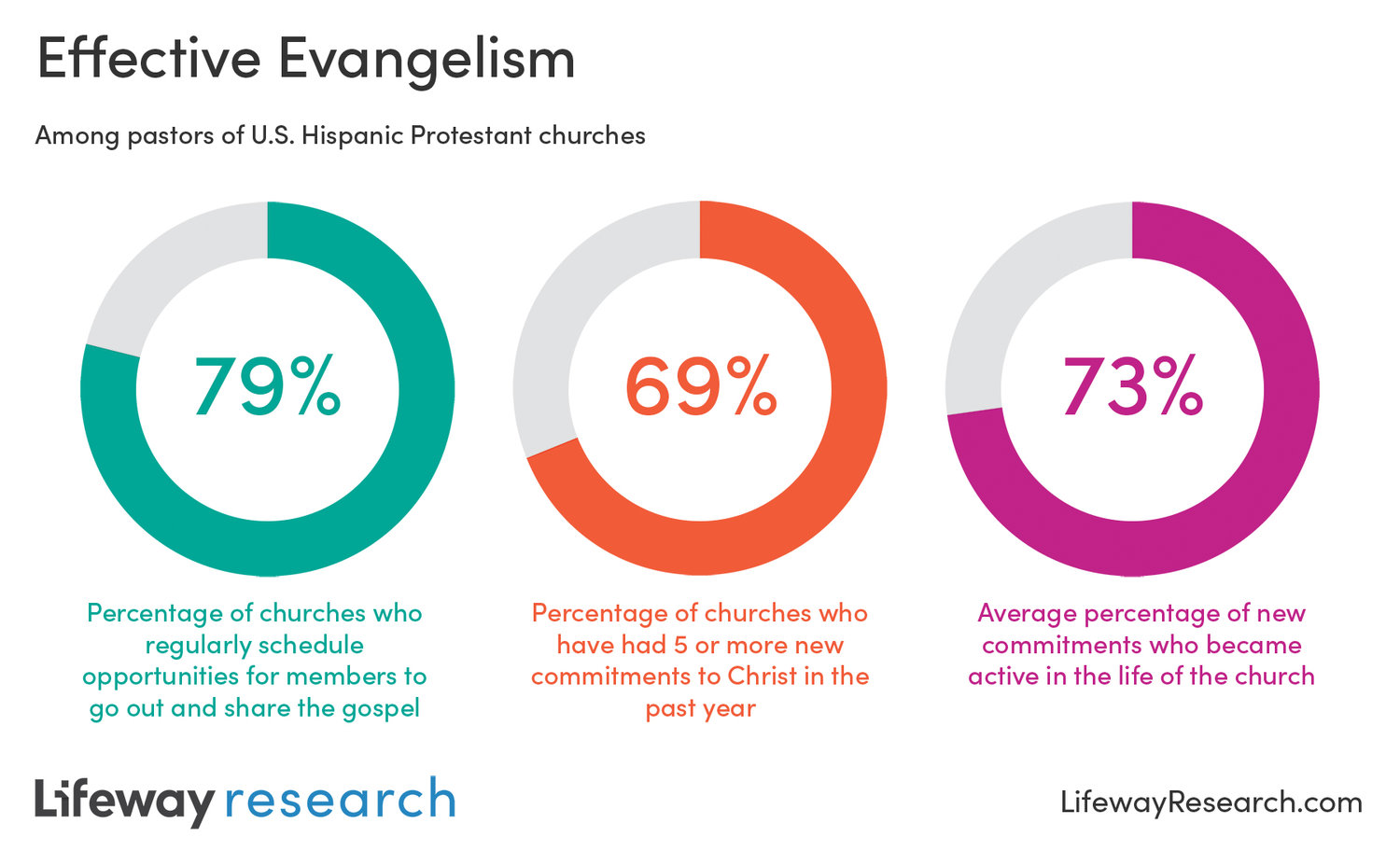 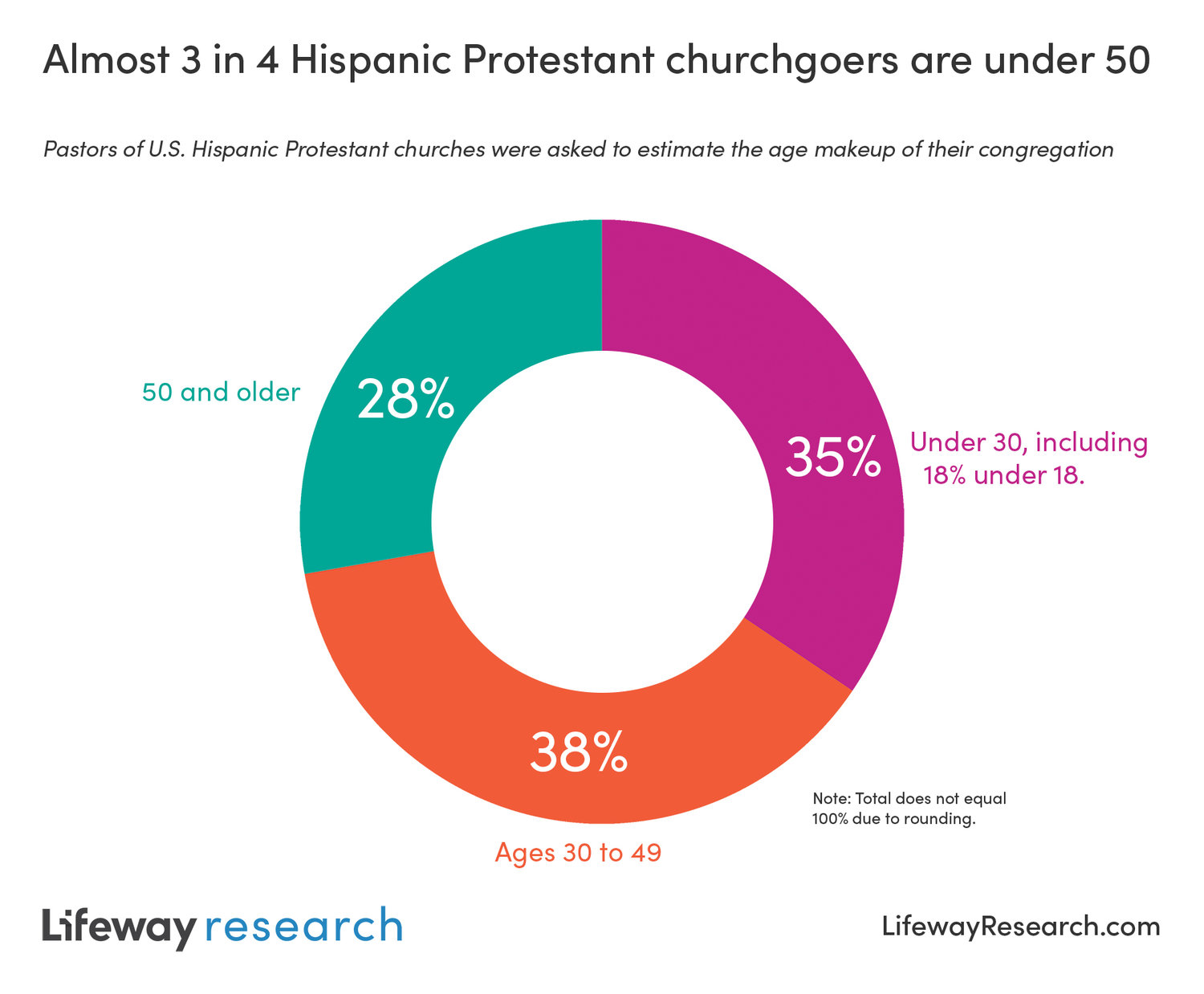 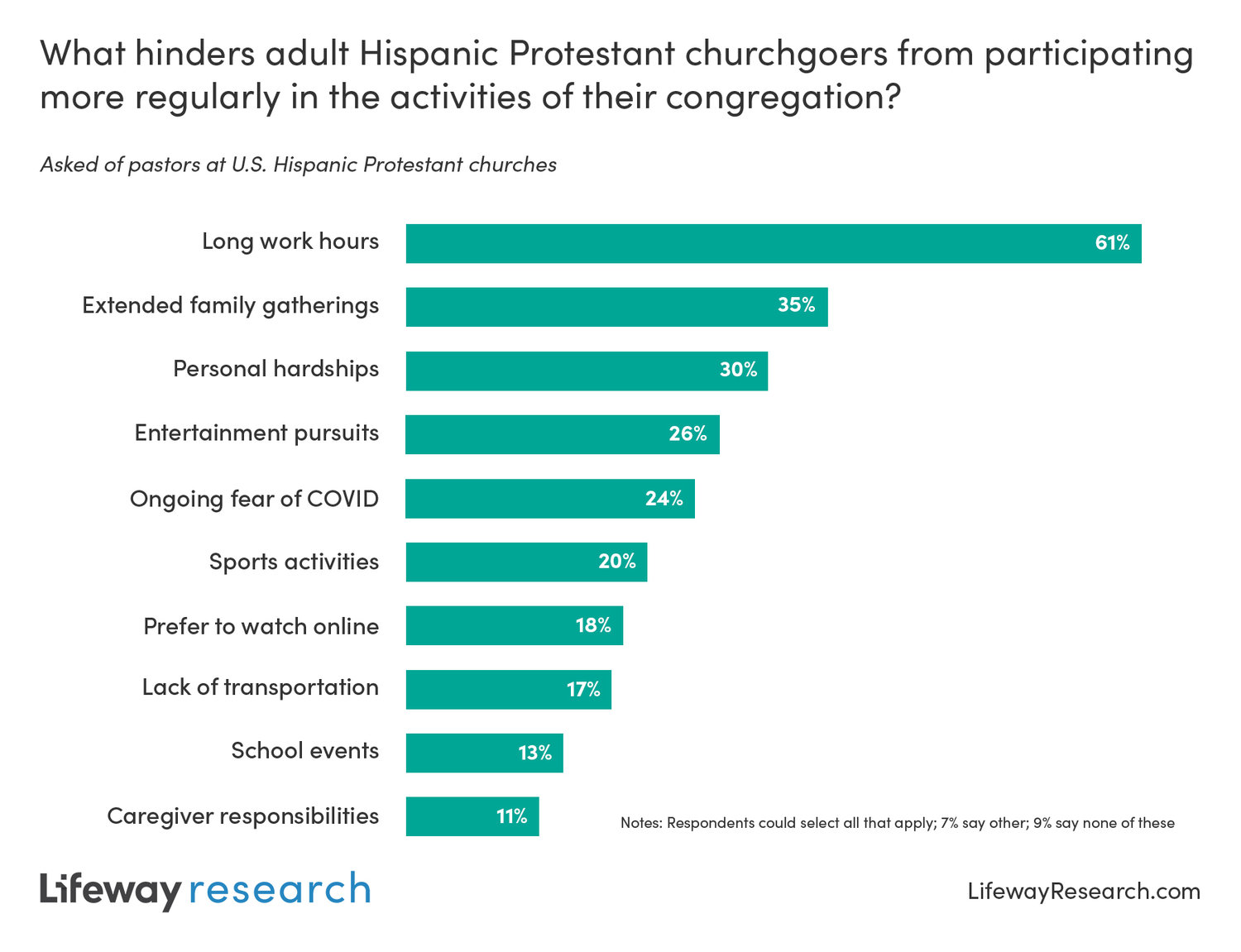 NASHVILLE, Tenn. — Hispanic churches in the United States face unique challenges but are finding success in building community within their congregations and reaching those outside their walls.

Lifeway Research partnered with two dozen denominations and church networks to include what is likely the largest number of Protestant Hispanic congregations in the U.S. ever invited to a single research study. Sponsored by Lifeway Recursos, the Billy Graham Evangelistic Association and Samaritan’s Purse, the study surveyed 692 pastors of congregations that are at least 50% Hispanic.

“For decades, the Hispanic population in the U.S. has been growing exponentially, and it is imperative for churches to be informed about the specific needs of this community,” said Giancarlo Montemayor, director of global publishing for Lifeway Recursos. “This study will help us to continue the ongoing conversation of how to serve our brothers and sisters in a more strategic way.”

The study reveals a picture of Hispanic churches that are newer, younger and more effectively evangelistic than the average U.S. Protestant church.

Most Hispanic Protestant churches (54%) have been established since 2000, including almost a third founded in 2010 or later. Fewer than 1 in 10 trace their history prior to 1950.

Not only are the churches relatively new, but most people in the congregations are also new to the United States. The majority are first-generation Americans, born outside of the country. A quarter are second-generation, with parents who were born outside of the U.S. And fewer than 1 in 5 were born in the U.S. to parents who were also born in the U.S. As a result, more than half conduct their services only in Spanish, while nearly a quarter are bilingual.

Half of the churches are in a large metropolitan area with a population of 100,000 or more. Around 3 in 10  are located in small cities, with the rest split between rural areas and suburbs.

“The growth in the number of Hispanic churches in the U.S. has been remarkable,” said Scott McConnell, executive director of Lifeway Research. “While some of these congregations were started within Anglo churches – 14% of Hispanic congregations in this study currently are conducting services within a church that is predominantly non-Hispanic – the missional impetus has clearly come from within the Hispanic community itself as two-thirds of these congregations are led by first-generation immigrant pastors.”

In U.S. Hispanic Protestant churches, the average worship service attendance is 115. Like most other churches, they’ve not yet fully recovered from the pandemic. In January 2020, prior to the COVID-19 pandemic, the average attendance was 136. Still, 13% of churches are currently around their pre-pandemic levels. And 32% say they’ve grown in the past three years, despite the pandemic.

Almost every Hispanic Protestant pastor agrees that their congregation considers Scripture the authority for their church and their lives.

Around 7 in 10 say their church has the financial resources it needs to support their ministry, which includes some aspects that are common among most other Protestant congregations. Nearly three-quarters of  Hispanic Protestant churches say they regularly offer weekly adult small groups or Bible studies, two-thirds hold weekly prayer meetings and half offer weekly children’s small groups.

As to what hinders their congregation from participating more regularly in church activities, most pastors point to long work hours for their churchgoers. Others say extended family gatherings and personal hardships or crises. Around a quarter point to recreational or entertainment pursuits and lingering fear of COVID. F

“Many of the activities within Hispanic Protestant churches look similar to those in non-Hispanic churches in the U.S. with worship services, prayer meetings, Bible studies, and Sunday School classes being common,” said McConnell. “But pastors of Hispanic congregations are quick to point out immigrant families often have less time for church as many are working long hours, have family traditions and are impacted by American cultural distractions.”

Almost 4 in 5 pastors at U.S. Hispanic Protestant churches say they regularly schedule opportunities for members to go out and share the gospel.

Specifically, most pastors say their outreach activities in the past year included church members inviting people to church, using social media to share church activities, children’s special events like VBS, Easter egg hunts or Fall festivals, community programs like food distribution, toy giveaways, or providing clothing, and church members sharing the gospel in conversations. Additionally, 3 in 10 congregations did door-to-door evangelism, nearly a quarter offered evangelism training and some provided financial support for a new church start. Hardly any churches say they have not been able to do any of those recently.

Their outreach seems to be effective, as close to half say 10 or more people have indicated a new commitment to Christ in the past year, including nearly a quarter who have seen 20 or more such commitments.

As they’ve reached these new individuals, pastors say most are sticking around. Almost 3 in 4  of those new commitments have become active participants in the life of the church, according to pastors. As a result, 88% of Hispanic Protestant pastors say they consistently hear reports of changed lives at their churches.

“Hispanic congregations are very active in engaging new people,” said McConnell. “Not only is there much evangelistic activity in Hispanic churches, but God is also blessing them with new people who commit to following Jesus Christ.”

As new members join Hispanic Protestant churches, they become part of congregations that are actively trying to grow together, according to their pastors. Almost 9 in 10 say their church has a plan to foster community in their church.

Pastors point to numerous activities as vital to building a strong sense of community within their congregations. At least 9 in 10 say praying together, studying the Bible together, choosing to get along and promoting unity, welcoming those from different cultures and backgrounds, choosing to be transparent and accountable with one another and checking-in or noticing when others are absent are  important aspects of unity in their churches. Additionally, most say the same about members working together to serve people in the community, socializing outside of church and sharing resources with each other.

Most pastors say they’ve heard about their church members engaging in each of those actions at least a few times in the past month.

“Fellowship among believers in a local congregation is something the Bible communicates should be taking place,” said McConnell. “Hispanic churches take this seriously and invest in these relationships.”

Among pastors of U.S. Hispanic Protestant congregations, 93% are Hispanic themselves. Almost all are the senior or only pastor of a congregation, while 5% are Hispanic campus pastors with a multi-site church. More than half serve as full-time pastor, just over a quarter are bi-vocational, and 1 in 10 are part-time.

Almost half of pastors in Hispanic Protestant churches are between the ages of 50 and 64. Almost 8 in 9 pastors  are male. Two in 3 are first-generation Americans, while 15% are second-generation and 19% are third. Close to 3 in 4 are college graduates, including more than 4 out of 10 who have a graduate degree.

Theologically, 4 in 5 pastors at U.S. Hispanic Protestant churches self-identified as evangelical. Around 1 in 6  say they’re mainline.

Aaron Earls is a writer for Lifeway Christian Resources.