With Bennett back at QB, Dawgs hunt another national title 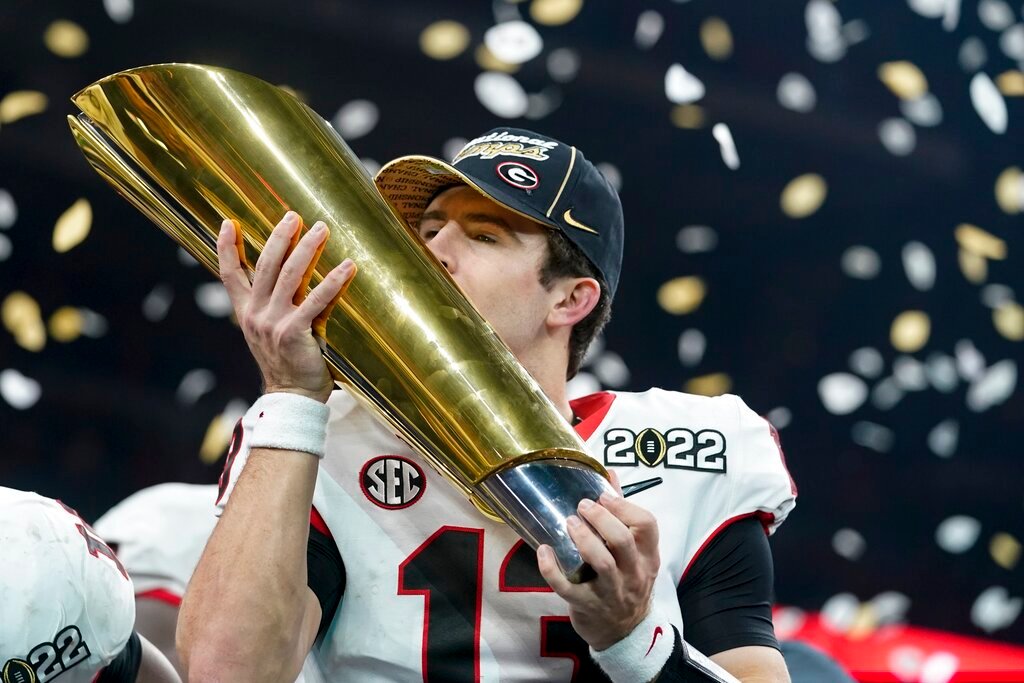 Instead, the former walk-on will suit up again in the red and black, looking to lead Georgia to a national championship repeat.

Bennett's somewhat surprising return at quarterback — this is his sixth college season and he turns 25 in October — was a counter to the massive losses sustained by the Bulldogs, especially on the defensive side.

“I think it is the biggest honor in the world to be able to go out there with a ‘G’ on the side of my helmet,'” Bennett said. “So really, it wasn’t that tough of a decision.”'

Bennett's improbable journey has become the stuff of legend. He walked on at Georgia in 2017, played one year at an obscure junior college in Mississippi, returned to the Bulldogs mainly to provide depth, and wound up as the No. 1 quarterback for the school's first national title since 1980.

At just 5-foot-11 and 190 pounds, Bennett knows he's unlikely to get much of a look from the NFL. Once he was assured the top job at Georgia would remain his, Bennett decided to play one more season in Athens.

“I am secure enough. I can look in the mirror," he said. “I wouldn’t have gotten drafted high last year. So, what was the guarantee that I was going to go start in the NFL? Probably really low."

Last season, Bennett completed more than 64% of his passes for 2,862 yards and 29 touchdowns. He came up especially big in the most important games, earning offensive MVP honors in both the Orange Bowl semifinal game and the national championship victory over Southeastern Conference rival Alabama.

Bennett's final two passes of the season went for touchdowns, r allying the Bulldogs to a 33-18 victory that capped their rise to national powerhouse under coach Kirby Smart.

Rewarded with a $112.5 million contract that ties him to Georgia for another decade, Smart faces the challenge of keeping the momentum going despite having a record 15 players selected in the NFL draft.

But Smart dismissed any suggestion that his team won't be as hungry after winning it all.

“People ask the question, ‘How does it feel to be hunted?’ We will not be hunted at the University of Georgia. I can promise you that," the coach said. "The hunting we do will be from us going the other direction. We’re not going to sit back and be passive about it.”

Georgia faces the daunting task of replacing first-round picks Walker, Jordan Davis, Quay Walker, Devonte Wyatt and Lewis Cine off one of the great defenses in college football history. But make no mistake: there's still plenty of talent on that side of the line for the Bulldogs. Defensive lineman Jalen Carter should have a huge season, Nolan Smith anchors the linebacking corps, and the secondary is led by Kelee Ringo and Christopher Smith.

Brock Bowers emerged as one of the nation's most dynamic offensive weapons as a freshman. The 6-4, 230-pound tight end displayed a receiver's speed while leading the team with 56 receptions for 882 yards — 15.8 per catch — and 13 TDs. But Bowers is far from the only tight end capable of affecting a game. The Bulldogs also have massive Darnell Washington (6-7, 270 pounds) and transfer Arik Gilbert, who didn't play last season after a dazzling freshman debut at LSU.

Georgia has long been known as a school that produces great running backs. With James Cook and Zamir White moving on to the NFL after sharing the lead role in 2021, the Bulldogs are likely to stick with a committee approach. Kenny McIntosh and Kenny McIntosh ate the top options, but could get pushed by Daijun Edwards and a pair of freshmen.

Punters rarely get a lot of attention, but Jake Camarda was a huge field-position weapon for the Bulldogs over the last four years. With Camarda now in the NFL, Australian freshman Brett Thorson and redshirt freshman Noah Jones are battling for the No. 1 role.

Georgia gets a stiff challenge in its very first game, making the short trip to Atlanta to face No. 11 Oregon on Sept. 3. Former Bulldogs quarterback Dan Lanning will be making his debut at the Ducks' head coach, adding another layer to the build-up. The rest of the schedule doesn't look nearly as daunting, with traditional rivals such as Auburn and Florida in rebuilding mode. The toughest test after Oregon might be a Nov. 19 trip to Kentucky for the SEC regular-season finale.