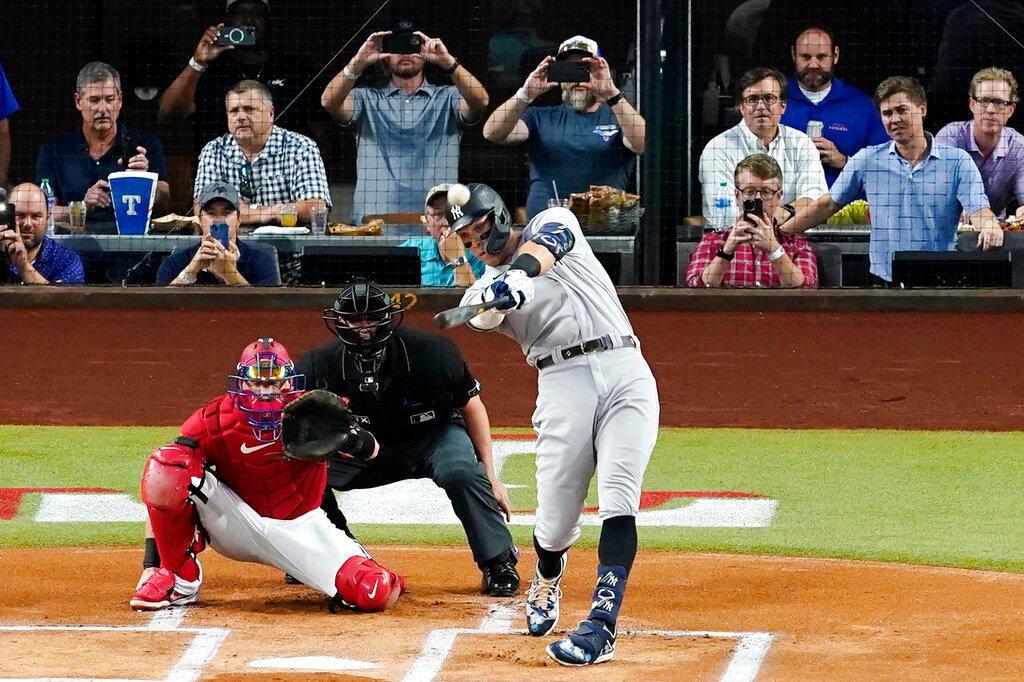 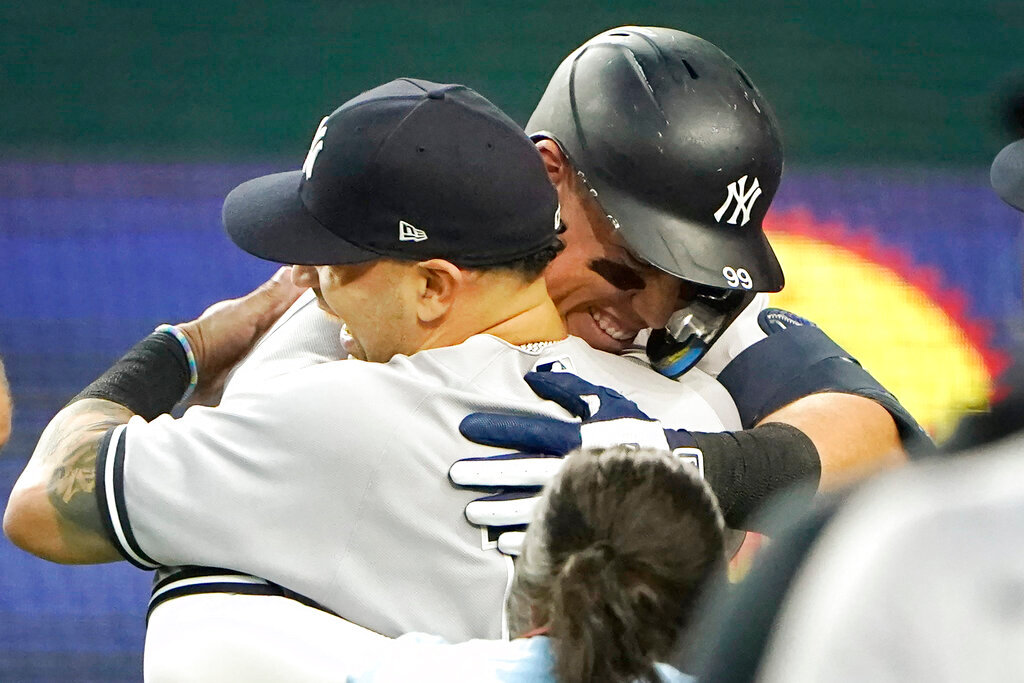 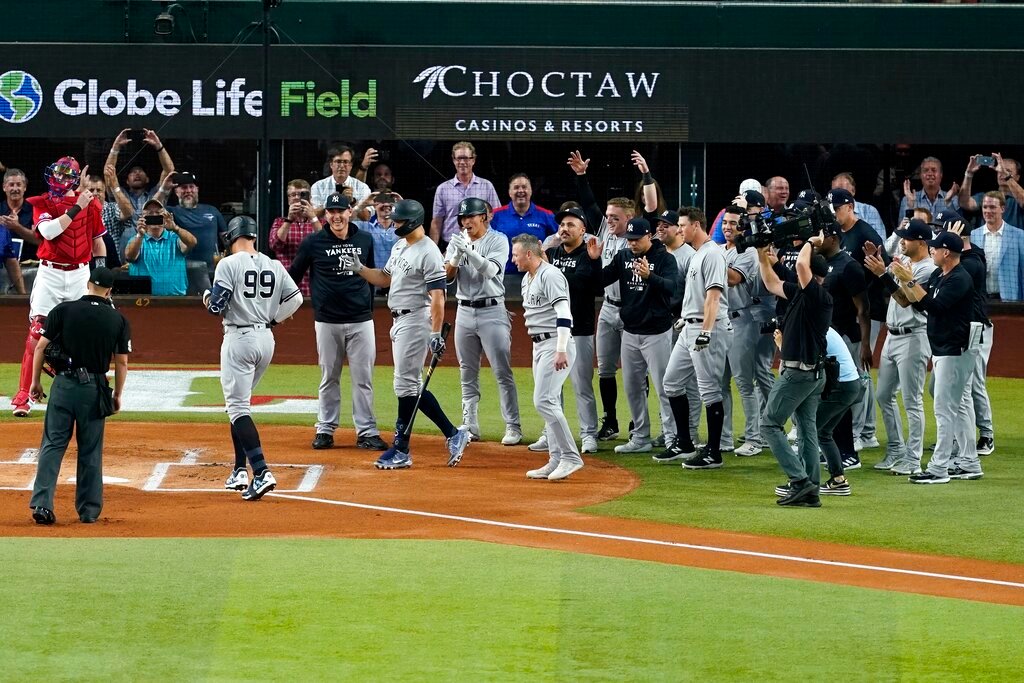 New York Yankees' Aaron Judge (99) approaches home plate as teammates come out to congratulate him after hitting a solo home run, his 62nd of the season, in the first inning against the Texas Rangers in Arlington, Texas, Tuesday, Oct. 4, 2022. (AP Photo/Tony Gutierrez)
Previous Next
Posted Tuesday, October 4, 2022 8:14 pm
By STEPHEN HAWKINS, Associated Press

The long chase to top a mark set in 1961 ended when the 30-year-old Yankees slugger drove a 1-1 slider from Texas right-hander Jesús Tinoco into the first row of seats in left field leading off the second game of New York's day-night doubleheader.

After No. 99 took a smooth, mighty swing, he had a wide smile on his face as he rounded the bases and his Yankees teammates streamed out of the dugout to celebrate with him. They stayed away from home plate, letting Judge step on it before sharing hugs and high-fives.

Judge's mother and father were in the stands to see him end a five-game homerless streak, including Game 1 of the doubleheader when he was 1 for 5 with a single.

The ball was caught by Cory Youmans of Dallas, who was sitting in Section 31. When asked what he was going to do with the ball while being taken away with security to have the ball authenticated, Youmans responded, “Good question. I haven't thought about it.”

Judge, eligible to become a free agent after this season, struck out on a full-count pitch when batting again in the second.

He took right field in the bottom of the inning before manager Aaron Boone pulled him from the game. Oswaldo Cabrera, who had been at second base, moved to right field and the slugger got another loud ovation as he jogged back to the Yankees dugout on the third base side.

Reaction quickly came from far beyond the ballpark.

Maris’ 61 for the Yankees had been exceeded six times previously, but all were tainted by the stench of steroids. Along with Bonds' record, Mark McGwire hit 70 for the St. Louis Cardinals in 1998 and 65 the following year. The Chicago Cubs’ Sammy Sosa had 66, 65 and 63 during a four-season span starting in 1998.

McGwire admitted using banned steroids, while Bonds and Sosa denied knowingly using performing-enhancing drugs. Major League Baseball started testing with penalties for PEDs in 2004, and some fans — perhaps many — until now have considered Maris as holder of the legitimate record.

A Ruthian figure with a smile as outsized as his body, the 6-foot-7 Judge has rocked the major leagues with a series of deep drives that hearken to the sepia-tone movie reels of his legendary pinstriped predecessors.

“He should be revered for being the actual single-season home run champ,” Roger Maris Jr. said Wednesday night after his father's mark was matched by Judge. “I think baseball needs to look at the records and I think baseball should do something.”

Judge had homered only once in the past 13 games, and that was when he hit No. 61 last Wednesday in Toronto. The doubleheader nightcap in Texas was his 55th game in row played since Aug. 5.

Judge was 3 for 17 with five walks and a hit by pitch since moving past the 60 home runs Babe Ruth hit in 1927, which had stood as the major league record for 34 years. Maris hit his 61st off Boston’s Tracy Stallard at old Yankee Stadium on Oct. 1, 1961.

Judge has a chance to become the first AL Triple Crown winner since Detroit’s Miguel Cabrera in 2012. He leads the AL with 131 RBIs and began the day trailing Minnesota’s Luis Arraez, who was hitting .315.

The home run in his first at-bat put him back to .311, where he had started the day before dropping a point in the opener.

Judge’s accomplishment will cause endless debate.

“To me, the holder of the record for home runs in a season is Roger Maris,” author George Will said earlier this month. “There’s no hint of suspicion that we’re seeing better baseball than better chemistry in the case of Judge. He’s clean. He’s not doing something that forces other players to jeopardize their health.”