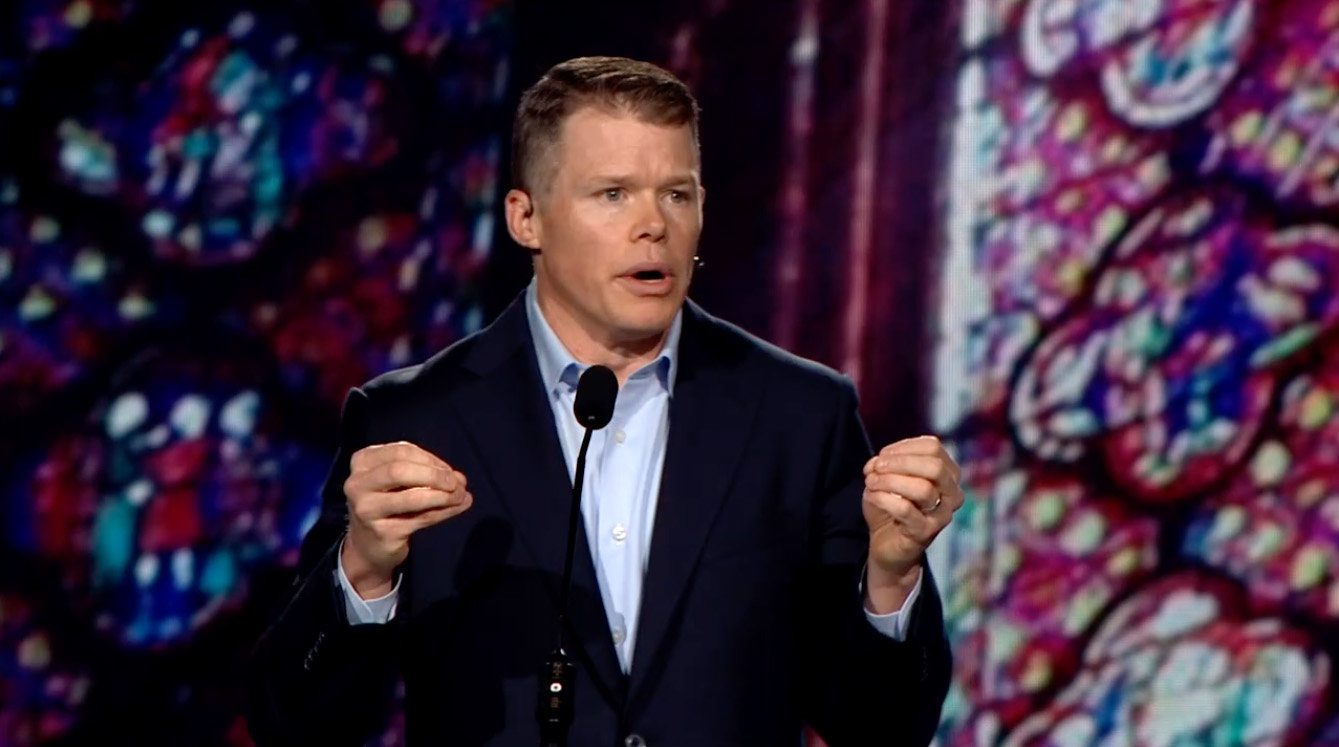 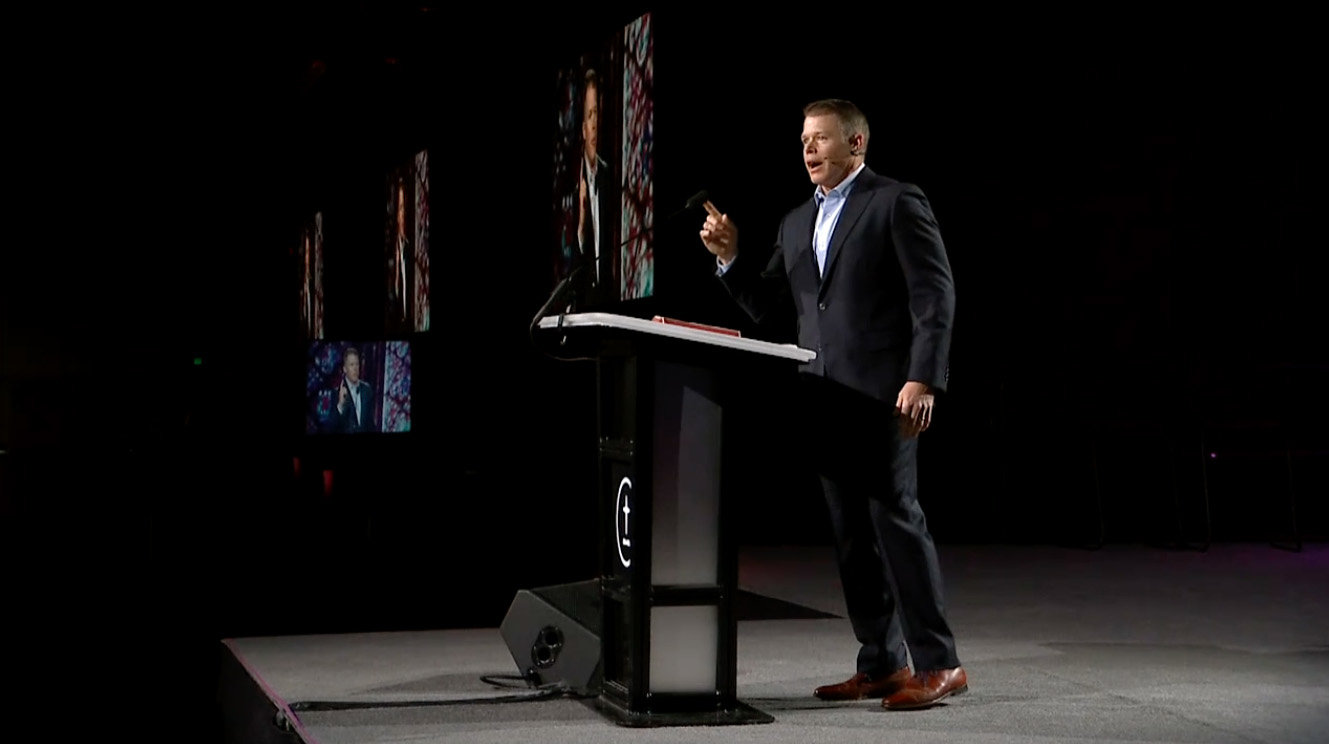 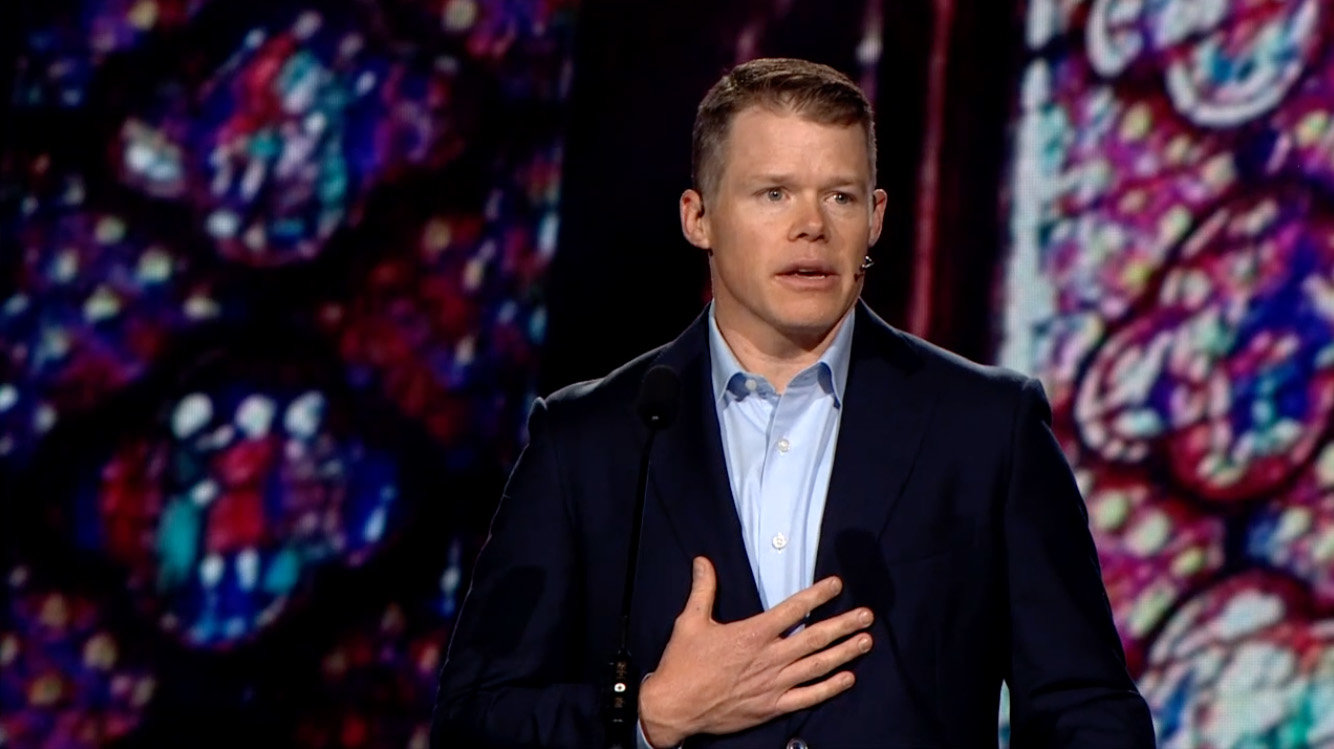 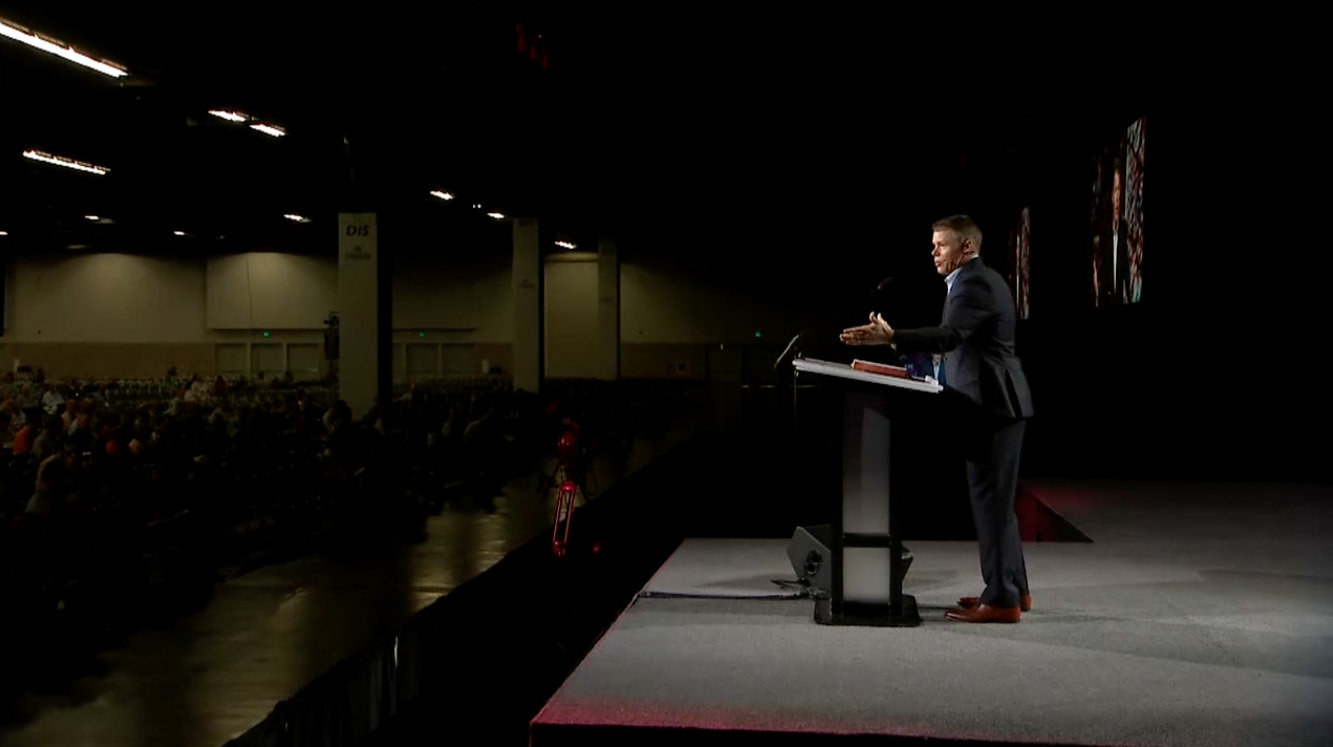 ANAHEIM, Calif. – Georgia’s Clay Smith told Southern Baptist pastors on Monday that, amid cultural shifts that have made their jobs tougher, it’s more crucial than ever to be faithful to their calling.

“As has often been said, we’re now the away team in our world,” said Smith, pastor at Johnson Ferry Baptist Church in Marietta, Ga. “The fans aren’t wearing our jerseys. They’re not clapping for us. They’re not rooting for us.”

Smith preached Monday morning at the Southern Baptist Convention Pastors’ Conference in Anaheim, a precursor to the annual meeting that gets underway on Tuesday.  He challenged and encouraged pastors who may be considering giving up, pointing them to the Apostle Paul who found joy in ministry, even when it landed him in jail.

Smith pointed out that Paul’s life got infinitely more difficult when he said “yes” to Jesus.

“In this joyless, cynical world in which we find ourselves, we need to joyful, because, can you believe that God picked you to do this?” he asked. “Can you believe we get to do this, to be involved in ministry, to be involved on the frontline with people’s lives, in the critical moments of their lives? God could have picked anybody, but He picked you. And if you’re hanging on by a thread today, thinking I’m just ready to bow out, I’m ready to throw in the white towel, I’m ready to quit, can I just remind you that God picked you. And no matter what you’re going through, you can rejoice, even in the midst of your suffering.”

Smith drew laughs when he challenged pastors who might insist they are joyful.

“I would say to you, maybe you should tell your face,” he quipped, “because pastors can sometimes be the most cynical, negative, pessimistic people.”

Citing a survey of children, Smith said more kids want to grow up to be YouTubers than astronauts.

“It wasn’t because of the money,” he said. “You know what it was for? The fame. I wonder how many pastors today are suffering from the same delusion, that somehow this is a pathway to success and to fame? If you picked pastoral ministry as a pathway to fame, you are a fool. We aren’t celebrities. We aren’t CEOs. No, we are shepherds, under-shepherds of the flock of God.”

Ministry, Smith said, can be especially tough when people are second-guessing your every decision.

“You know, leadership is easy when you’re not in charge,” he said. “Isn’t it amazing how people from the sidelines know exactly what to do in every single circumstances? And they love to tweet about it. Let me also remind of this: Tweetership is not leadership. Leadership is getting in the trenches. Leadership is doing the hard work. Leadership is serving the people of God.”

Smith urged pastors to have the right attitude, to understand the assignment, to keep their aim true, and to endure the agony, just as the Apostle Paul did.

“In Christ, you will make it,” he said. “If I were to ask you if you’re going to make it, the answer, left to your own devices, your own strength, is ‘no, I will not make it. I’m not good enough. I’m not smart enough. I don’t have the wisdom that I need of myself. I don’t have the energy or the power.’ You cannot do it in your own power. But you can do it in the power of Jesus.”

Almora's bases-loaded walk-off single lifts Reds over Braves
CINCINNATI (AP) — Albert Almora Jr. slapped a bases-loaded single past a drawn-in infield in the ninth to give the Cincinnati Reds a 4-3 win over the Atlanta Braves on Sunday. “I …

31 bodies, some decomposing, found at Indiana funeral home
JEFFERSONVILLE, Ind. (AP) — Police are investigating after more than 30 bodies, some decomposing, were found inside a southern Indiana funeral home. Police in the Louisville suburb of Jeffersonville responded to Lankford Funeral Home and Family Center on Friday evening and found 31 bodies, including some "in the advanced stages of decomposition,” Maj. Isaac Parker said.

Alpine glacier chunk detaches, killing at least 6 hikers
ROME (AP) — A large chunk of an Alpine glacier broke loose Sunday and roared down a mountain in Italy, sending ice, snow and rock slamming into hikers on a popular trail on the peak and killing at least six and injuring nine, authorities said, warning that the toll might climb.

Bone cancer, brain hemorrhage not stopping 'God's man' Tony Dickerson
COLUMBUS, Ga. – Tony Dickerson makes his way into the pulpit, his voice unmistakable in its rhythm and intensity. “I want to tell you friends, God is in this place,” he declares with a boldness that fills the auditorium at Pinehurst Baptist Church. “And don’t you for one minute doubt it. He is here, and we are going to have a meeting with Him.” People settle into their seats, eager to be taken on an adventure through the Bible by the pastor who has been serving the same Columbus church for the past 50 years, an almost unheard of tenure.

WWII Medal of Honor recipient to lie in state at US Capitol
CHARLESTON, W.Va. (AP) — Hershel W. “Woody” Williams, the last remaining Medal of Honor recipient from World War II, will lie in state at the U.S. Capitol, U.S. Sen. Joe Manchin announced at a memorial on Sunday where Williams was remembered for his courage, humility and selflessness.
© Copyright 2022 The Christian Index | Copyright/Terms of Use
Powered by Creative Circle Media Solutions