Missionary from Fayetteville seeing God at work in Argentina's prisons 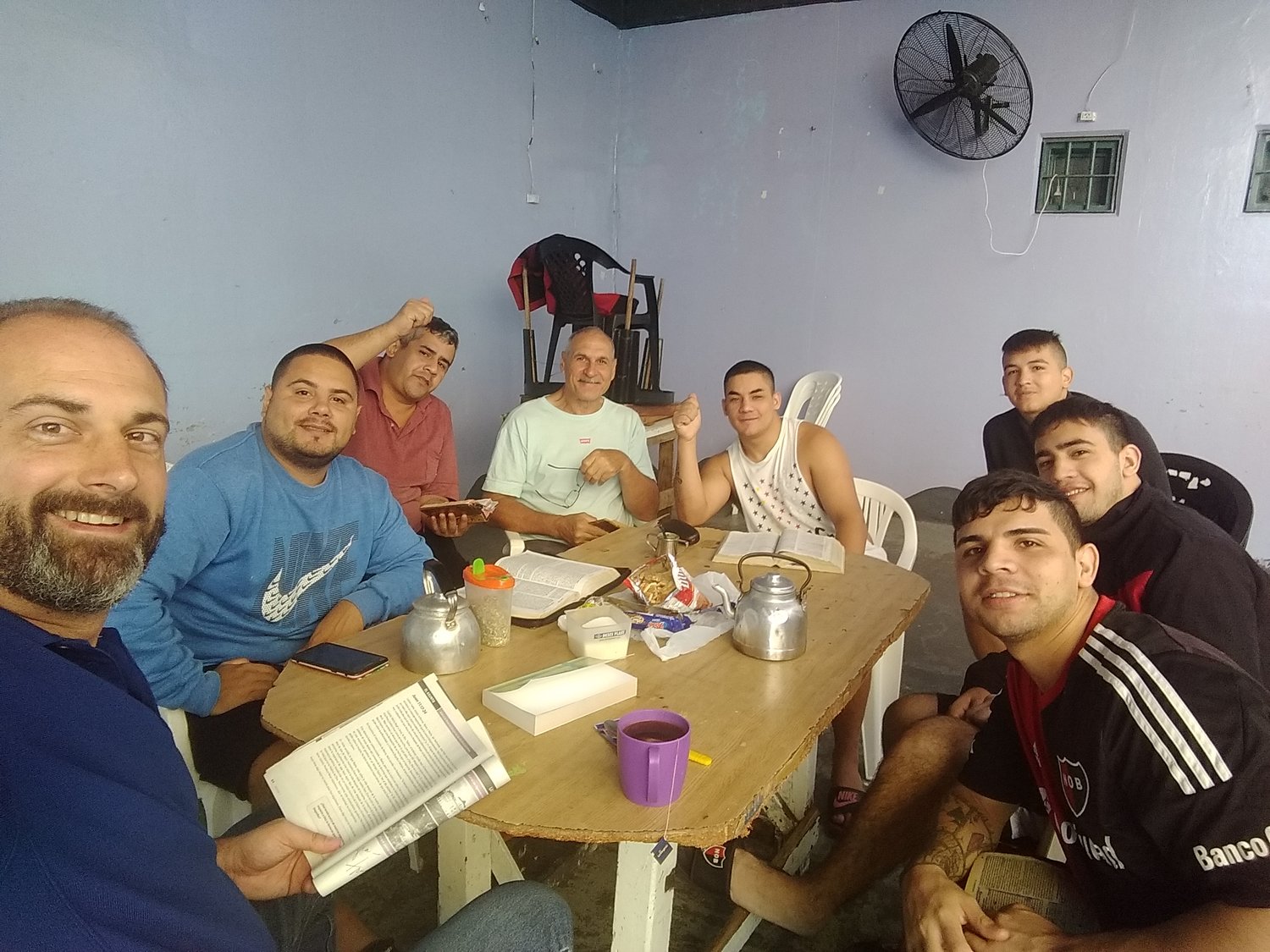 Jason Cobb, a missionary from Fayetteville, takes a selfie during a prison bible study. 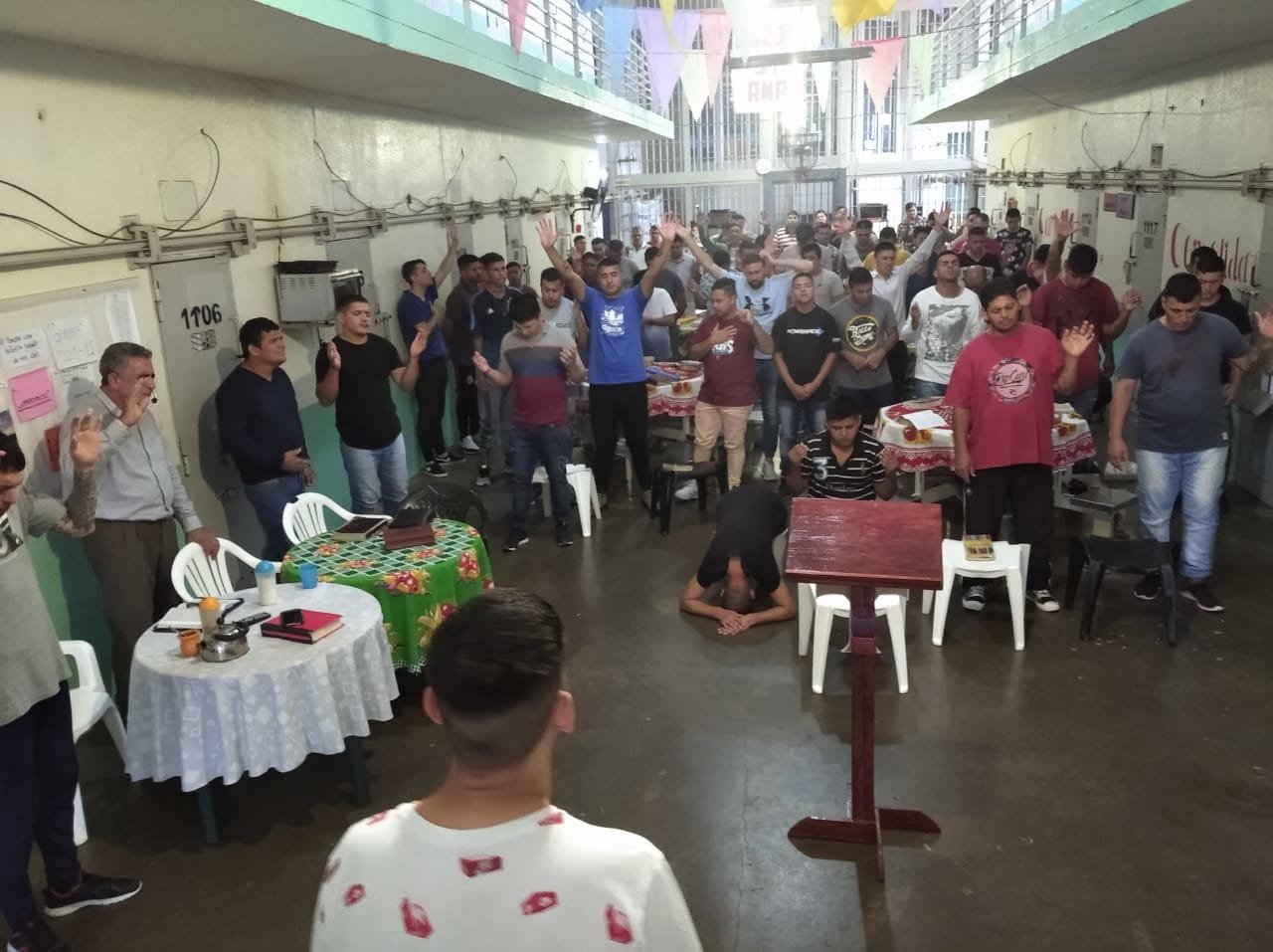 Inmates worship inside a prison in Argentina, where revival is underway.
Previous Next
Posted Sunday, January 9, 2022 11:18 am
By ROGER ALFORD, The Christian Index

ROSARIO, Argentina — Georgia Baptist missionary Jason Cobb is awed by the Lord’s power to change lives, even among the most hardened criminals he ministers to in the prisons of Argentina.

“These guys have just been transformed completely,” said Cobb, who was called to international missions out of First Baptist Church in Fayetteville, Ga. and has been working in prison ministry in  Argentina’s most violent city for the past six years. “It’s the most fruitful ministry I’ve ever done.”

So successful is Cobb's ministry in an daround Rosario that it  got a mention by The Associated Press, the world’s largest newsgathering operation,  in an article that circulated around the globe last week.

The article took an in-depth look at a revival underway inside Argentina’s prisons.

“Many here began peddling drugs as teenagers and got stuck in a spiral of violence that led some to their graves and others to overcrowded prisons divided between two forces: drug lords and preachers,” the article said. “Over the past 20 years, Argentine prison authorities have encouraged, to one extent or another, the creation of units effectively run by evangelical inmates.”

The AP article plugged the ministry Cobb and his wife Natalia are part of, called The Puerta del Cielo ("Heaven's Door").

“One of the things I love about working with criminals is you don’t have to convince them that they’re bad,” Cobb said. “Criminals admit that they’re sinners. The ones who admit that and repent … they’re the reason I do what I do.”

Rosario, a city of some 1.3 million people, has high levels of poverty and crime. It is a major port for the illegal drug trade and has fueled two factors that has caused the prison population of swell: violence between rival gangs seeking to control drug markets and a huge population of addicts.

For the addicts, Cobb said, prison forces them off drugs, which is a crucial part of being able to get them to understand the gospel.

“For some of them, this may be the first time in many, many years that they’ve been sober,” Cobb said. “So, this is our opportunity to reach those guys.”

Cobb chuckles when asked how many inmates he has baptized in the prisons of Argentina, because he doesn’t keep track. “It’s in the hundreds,” he said. “I really don’t know.”

"He has been very faithful to pursue the Lord’s will and make an impact wherever he is," Thomas said.

As a young man in Fayetteville, Cobb did short-term mission trips to various countries in South America, which created in him a hunger to do more.

“I told God if he wants to use me for full-time missions, that I am available, that I’m willing to go,” he said. “It was about three days later that I was offered that opportunity.”

His initial missionary assignment was in Africa, helping to build schools and homes, only later discovering his passion for prison ministry.

Cobb told The Christian Index about a young cocaine addict who ended up in prison for theft. His addiction had alienated him from his family, and he was spiraling downward.

“Going to prison was the best thing that ever happened to him,” Cobb said of the young man. “He got sober. He was able to hear the gospel message. He got saved. He got baptized. It was a total change in his life. As a result of his salvation, his entire family has become Christians now. It was a transformation not only for him but for his entire family.”

Worship services inside Argentina's prisons tend to be full of emotion, Cobb said, because the inmates are so thankful for their deliverance from  depths of sin.

“These guys are on fire for Jesus,” he said. “There’s no way you could calm their enthusiasm. They clap their hands. They sing in loudly. They raise their hands. It’s all of that.”
___

For more information about Cobb's ministry, reach him at  jcobb77@comcast.net.

Ex-Maryland star Bernhardt tries switch from lacrosse to NFL
ATLANTA (AP) — Jared Bernhardt has traded in his stick for the pigskin. Just two years after being honored as the nation’s top college lacrosse player, Bernhardt is trying to make it as an NFL receiver with the Atlanta Falcons.
Kentucky Supreme Court keeps near-total abortion ban in place
FRANKFORT, Ky. (AP) — Kentucky’s Supreme Court is keeping the state’s near-total abortion ban in effect. The high court says the state's ban will remain in place while it reviews arguments by abortion clinics challenging the state law. It was the latest legal setback for the two remaining abortion clinics in Kentucky — both in Louisville.

Browns QB Deshaun Watson suspended 11 games
BEREA, Ohio (AP) — Deshaun Watson has reached a settlement with the NFL and will serve an 11-game suspension and pay a $5 million fine rather than risk missing his first season as quarterback of the Cleveland Browns following accusations of sexual misconduct. Watson was accused of sexual assault and harassment by two dozen women while he played for the Houston Texans.

Disqualified for disabilities, railroad workers fight back
OMAHA, Neb. (AP) — Union Pacific has already lost three lawsuits over the way it removes employees with health conditions because of safety concerns, and the prospect of hundreds more lawsuits looms over the railroad. The lawsuits were originally going to be part of a class-action case before a federal appeals court decided the cases must be pursued individually.
© Copyright 2022 The Christian Index | Copyright/Terms of Use
Powered by Creative Circle Media Solutions